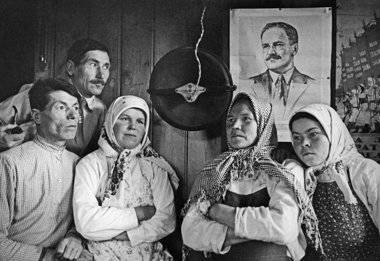 Critics of the Soviet state system invariably draw attention to the fact that it has spent most of its stories existed in extraordinary circumstances, sometimes independently, in their own interests producing an emergency situation.


The grounds for such conclusions are, and considerable. However, as often happens in life, under certain conditions, disadvantages turn into their opposite, becoming virtues.

This happened to the USSR government system after 22 June 1941, when everything became subordinate to the achievement of one single goal - the reflection of fascist aggression.

In the prewar period, the importance of determining in advance what shape the country's government would take in the event of war was, unfortunately, underestimated. “We felt the absence of the system with particular urgency in the first days of the Great Patriotic War,” recalled a member of the government, the people's commissar of the navy, admiral N. G. Kuznetsov. - The state machine, directed along the rails of the improbability of Hitler’s attack, was forced to stop, go through a period of confusion and then turn 180 degrees. The consequences of this had to be corrected on the move at the cost of great sacrifices. ” 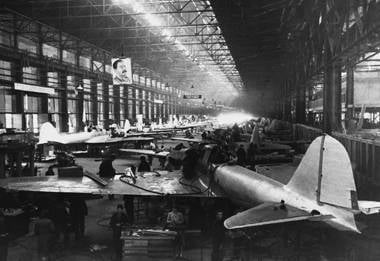 Out of the ordinary tests that hit the country, they demanded emergency organizational forms of government. 30 June 1941 was established by the State Defense Committee (GKO), headed by JV Stalin. It was not provided for by the USSR Constitution, its establishment was dictated by the extreme conditions of the catastrophic start of the war, the need for the fastest mobilization of all forces to repel the enemy and the demands for maximum centralization of leadership. The State Defense Committee was endowed with full power, its decisions and orders were binding on all government, military bodies, party committees and public organizations, all citizens of the country. As a result, constitutional bodies — the USSR Supreme Soviet and the Council of People's Commissars of the USSR — underwent serious changes: they took a subordinate position in relation to the GKO, their functions and powers began to quickly narrow.

The independence of the USSR Supreme Soviet was reduced to a minimum. Suffice to say that until the end of 1941, not a single session took place. As for the Presidium of the Supreme Soviet of the USSR, its role was reduced to formalizing in the form of decrees those decisions that, according to the Constitution of the USSR, belonged to the competence of the highest legislative body - on the introduction of martial law, general and partial mobilization in the armed forces and others. The formal head of state - Chairman of the Presidium of the Supreme Soviet of the USSR M. I. Kalinin - was not even a member of the State Defense Committee.

The Council of People's Commissars of the USSR, possessing a branched apparatus of people's commissariats and committees operating under it, became a conductor of the GKO line - first of all, in providing the economic component, organizing the evacuation of industrial enterprises to the east, arranging the production of non-military products, managing credit and monetary systems. The SNK’s own capabilities have narrowed, since industrial defense commissariats were transferred from its jurisdiction to the direct subordination of T-bills (aviation, tank(ammunition, ammunition, etc.), railway and water transport commissariats, industrial commissariats - ferrous, non-ferrous metallurgy, coal, oil, chemical industry, commissariat of power plants, etc. 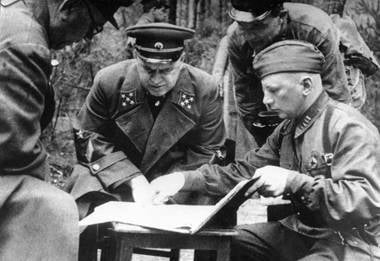 An important role in the new configuration of government continued to play the Communist Party in the face of its governing bodies. In fact, the center of political power has shifted from the Politburo of the Central Committee of the CPSU (B.) Nevertheless, it would be rash to assert that the leading party bodies were removed from the levers of power. It should be noted that the GKO acted strictly in the framework of the political goals and objectives that were defined by the Politburo. It is also indicative that all the persons who were part of the GKO were members or candidates for membership of the Central Committee of the CPSU (b), and city defense committees acting on the ground were headed by secretaries of city committees and regional committees of the CPSU (b). So the extraordinary nature of the GKO did not abolish, but only slightly modified the leading role of the Communist Party and marked the almost complete merging of the highest party-state institutions.

GKO solved the global task of organizing a rebuff to Hitler aggression in three main directions. Carrying out political and administrative management, he took measures to strengthen law and order and military discipline in the country, established the procedure for evacuating the population and industrial potential, regulated issues of interstate relations, and determined measures for the eviction of certain groups of people to remote areas of the country. Solving the tasks of military-strategic leadership of the armed forces, GKO determined the total strength of the army and fleet, the ratio of the types of armed forces and arms of service, the volume and timing of calls and mobilization, made decisions on the formation of new units, formations, associations and on changing the organizational structure of the existing states, carried out the appointment of senior command staff. Providing military-economic management of the country, GKO determined the parameters of the development of the military economy, approved plans and organized production weapons, military equipment and other military products, took measures to the construction of defensive lines, set standards for supplies, solved other tasks in the conditions of the outbreak of war.

T-bills devoted most of their efforts to the solution of precisely military-economic problems: out of 10 thousands of resolutions, they accounted for two thirds. The Center for Concentration of its Efforts in the Military-Economic Field — the accelerated production of military equipment and armaments — the GKO already demonstrated by its Resolution No. 1ss from 1 in July 1941 of the Year “On the organization of the production of T-34 medium tanks at the Krasnoe Sormovo plant”. The People's Commissariat of the shipbuilding industry was tasked with starting 1 August 1941 production of thirty-fours, bringing their production to 700 – 750 by the end of the year, and in 1942 to thousands of tanks. The significance that the State Defense Committee attached to the accomplishment of this task is already indicated by the fact that in Gorky, to implement the resolution, the commissars V. A. Malyshev and I. I. Nosenko were seconded. 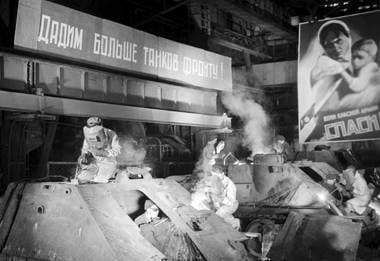 The rapid advance of the Wehrmacht deep into the Soviet territory, the loss of a significant part of the production potential due to the occupation of Soviet lands in the west of the country, the need to evacuate the most important industries from there caused a sharp decline in the output of military equipment and weapons. In this connection, the GNO 14 July 1941 of the year instructed the Chairman of the State Planning Committee N. A. Voznesensky, together with the heads of industrial commissariats, to "develop a military economic plan for the defense of the country, bearing in mind the use of resources and enterprises existing on the Volga, Western Siberia and the Urals , and also resources and the enterprises which are taken out to the specified areas as evacuation ". Such a plan for the fourth quarter of 1941 of the year and for the 1942 of the year was considered and approved by 16 of August of 1941 of the year, its implementation allowed for the restructuring of the entire national economy in a military manner and to increase the military-economic potential.

By the efforts of the newly formed Evacuation Council, by the end of 1941, eastward (to the Volga region, to the Urals, to Western and Eastern Siberia, Kazakhstan, and Central Asia), about 2600 enterprises were exported. At this base, in the eastern regions of the USSR, a military-industrial base was being created at a rapid pace.

As for the strategic leadership of the armed struggle against Hitler's Germany and its allies, it was carried out by another emergency body, the Supreme Command Headquarters, created on the second day of the war.

The principle of the strictest personal responsibility was put in the basis of the T-bills activity. Each member of the State Defense Committee received a specific task and was strictly responsible for the assigned area. Thus, V. M. Molotov was responsible for the production of tanks, G. M. Malenkov for the production of aircraft, aircraft engines and the formation of aviation units, A. I. Mikoyan was in charge of supplying the army with ammunition, food and clothing, K.E. Voroshilov oversaw the formation of new military units and formations. With regard to management methods, the top state leadership went along the line of their tightening. The administrative-command, directive method was dominant: it was customary for personnel even before the war, it turned out to be the most adequate to the conditions of war.

The assertion that the GKO was a virtual organ that did not exist in reality penetrated the historical literature. The abbreviation, supposedly intended to serve only as an imitation of collective leadership, concealed Stalin’s sole authority. Let us turn to the authority of G. K. Zhukov, who, by virtue of his official duties, the Chief of the General Staff, and later the Deputy Supreme Commander, regularly participated in the work of the highest authority.

“At meetings of the T-bills, which took place at any time of the day, as a rule, in the Kremlin or at the residence of I. V. Stalin, the most important issues were discussed and resolved,” recalled the marshal. - Plans of military actions were considered by the Politburo of the Central Committee of the Party and the State Committee for Defense. The commissioners of the people who were to take part in supporting operations were invited to the meetings. This allowed, when there was an opportunity, to concentrate enormous material forces on the most important areas, to pursue a single line in the field of strategic leadership and, reinforcing it with organized rear, to link the combat activities of the troops with the efforts of the whole country. ”

Marshal also recalled that the T-bills were held in a businesslike atmosphere, often sharp disputes arose, and opinions were expressed clearly and sharply. If it was not possible to reach a unanimous opinion, a commission of representatives of the extremes was created, and it was entrusted with it to report the agreed proposals at the next meeting.

The practice of the first months of the war showed that the measures taken to fundamentally restructure the system of state administration of the country and the armed forces through the creation of emergency bodies had fully justified themselves. With the inevitable costs, they nevertheless allowed in a short time to solve the most complicated task of restructuring all life on a military basis and to achieve a high degree of controllability of the state, the armed forces and society.

Ctrl Enter
Noticed oshЫbku Highlight text and press. Ctrl + Enter
We are
Diplomats of the People's Commissariat of Defense: on the eve and during the warChronicles of the Second World War: the pre-war period
39 comments
Information
Dear reader, to leave comments on the publication, you must to register.