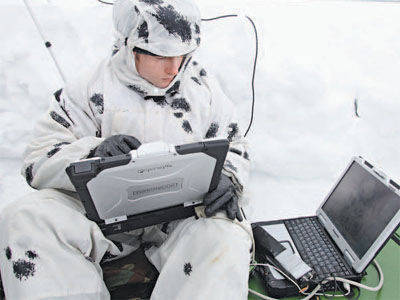 The Russian government allocates a record amount of 22 trillion rubles for the implementation of the armament program. The ultimate goal is to get a completely modernized army armed with the most modern equipment by 2020. Vladimir Popovkin, First Deputy Minister of Defense, who is responsible for the procurement of weapons and military equipment, told Izvestiya correspondent Dmitry Litovkin what the money will go to.

Izvestia: Vladimir Aleksandrovich, is 22 trillion a lot or a little to fulfill an ambitious program for rearming the army?

Vladimir Popovkin: We really have a large-scale complex of events planned within the framework of the State Armaments Program for the 2011-2020 years. I recognize that the existing needs for modern weapons and military equipment meet these measures in the minimum sufficient amounts. Their composition and content of tasks for the GW-2020 are structured and optimized strictly within the allocated funding limits.

and: President Dmitry Medvedev has set the task: by the end of 2015, the share of expenditures on the maintenance and purchase of new weapons should be 70% (now 30%). And by 2020, the army must be fully equipped with modern models of weapons and military equipment. How to solve this problem?

Popovkin: For the needs of the planning and construction of the Armed Forces, indicators of the ratio of the share of the costs of maintenance and equipment do not have independent significance. They only reflect one of the characteristics of the structure of the military budget. If we compare the predicted (taking into account measures to reform and reduce the number of) demand for financial resources for the maintenance and funds for the rearmament of the army and fleet, then at present these needs are satisfied a little more than half.

Under these conditions, the achievement of the required budget proportions depends on the pace of economic development of the state and, accordingly, the amount of funds allocated for rearmament. In the HPV-2020, the main priority is given to the procurement of complex high-tech samples. This is more than 70% of the program volume. The share of serial purchases of modern and promising samples in the new LG exceeds the same indicator of LG-2015 by 15-20%. So the update will be technology.

and: If we talk about priorities, will they change during the implementation of the armaments program? Still, almost nine years ahead ...

Popovkin: The armament program is a set of measures agreed upon in terms of goals, objectives, development directions, resources and deadlines for maintaining the necessary level of equipment of the Armed Forces with modern armaments, military and special equipment (VVST). The program is linked to the requirements of the new look of the army and the tasks that it will have to solve in the future. It takes into account the possibility of the state allocating the necessary financial resources to the industry for the production of the required volumes of WME. Including taking into account the availability of financial, production and other implementation risks, which can be specified within the framework of the annually approved State Defense Order (GOZ). A system of target indicators was developed and adopted to monitor the progress in the implementation of the LG. Control of their implementation will allow, in the event that the level of financing of the State Defense Ministry changes, to adjust the measures taken to equip the Armed Forces in a timely manner.

As for priorities, I think they will also remain unchanged. For us, this is above all a balanced development of the strategic weapons system; complete deliveries of modern and promising models of weapons (primarily to the formations and military units of constant readiness); the creation of basic information management systems, ensuring the use of high-precision weapons. In addition, the creation of a scientific and technical reserve and ensuring the development of new systems and models of weapons; maintaining the existing fleet of weapons in combat readiness.

and: Everything is good. But it’s known: none of the previously adopted armament programs was fully implemented. Is there such a "future" and the current program?

Popovkin: In developing the new state program of armaments, we took into account the mistakes of the previous programs. In particular, that the main share of funding was assumed for the second five-year plan of the 10-year program. Now the country's leadership has decided to allocate within the framework of the state program in the first five-year period, that is, before 2015, 700, billion rubles to defense companies so that they can conclude contracts in the period after 2015. They need this so that they can take the necessary loans from banks. So, I think, neither the priorities nor the scheme of financing their development will not change with time, but they will not be financially affected either.

and: What is the percentage ratio in the Russian army of new and old equipment? When is it possible to bring the share of modern weapons to 70%?

Popovkin: Despite the high level of equipment with the main types of weapons, most of the samples in the army are outdated. The share of modern facilities in the park is about 20% for strategic nuclear forces and does not exceed 10% for general purpose forces. For comparison: in the armies of leading foreign countries, this proportion is 30-50%.

This state of the armament park is due to the fact that since 1990-s it has not been practically updated. The volume of state orders was minimal, and the weapons system was maintained in combat readiness due to repairs. In fact, until 2007, only samples of strategic weapons and the means to support them were purchased.

In recent years, we have managed to reverse the situation with the procurement of weapons. At present, taking into account the nature of weapons development in the main countries of the world, the experience of its use in wars and armed conflicts, the appearance of the Armed Forces is optimized for tasks that will solve types of troops of the 2020 year. The parameters of the technical equipment of the Armed Forces were worked out during the substantiation of the LG-2020. The planned rates and volumes of purchases of complex final samples will allow to bring the update indicators on the main nomenclature of armament to the level of 70% by 2020 year.

and: The plans are ambitious, but there is an opinion that the Russian defense industry cannot digest them. The military industrial complex has reached the limit of its capabilities - the production base is aging, there is not enough power, there are no personnel. At the same time, the volume of foreign orders is growing ...

Popovkin: The volume of exports is really growing. There are also problems associated with the technological re-equipment of enterprises. The Ministry of Industry and Trade is already developing a federal targeted program "Development of the Russian military-industrial complex over the 2011-2020 years." In its project, it is planned to significantly raise the technological level of production of defense enterprises, to increase its compactness and readiness for innovation. The basis of this program is its interconnection with the HPV-2020 events according to the nomenclature, volume and timing of the creation of models of weapons and military equipment. So, I think, and here we will succeed.

and: In the meantime, this issue will be solved, will you continue to buy equipment abroad?

Popovkin: We are not interested in the procurement of any foreign weapons and military equipment. Such purchases are made only in order to eliminate the backlog of the domestic defense industry in a number of areas. If our industry does not have this, then why should not our army have this? This also applies to UAVs, large-capacity combat ships, in particular helicopter carriers, and sniper weapons for special forces. Believe that the adoption of any decisions on the import of weapons is preceded by a comprehensive military-economic assessment of the feasibility of such decisions. Here the balance of political, military-technical and economic interests is always important.

and: What proposals is being prepared by the Ministry of Defense in the framework of the implementation of the presidential instruction on the creation in the department of a separate structure in the field of ordering and supporting breakthrough high-risk research and development?

Popovkin: For us, the creation of a new structure in the field of procurement and support of breakthrough developments such as the American DARPA is considered a very urgent task. A comprehensive, weighted approach and study is required here, since the results of high-risk research and development are necessary not only for the creation of advanced weapons, but also for innovative civilian products.

In our opinion, such a structure should have a flexible staff, accumulate the achievements of many branches of science and technology, create conditions for competition at the level of ideas and concepts. The main activity should be the study of new scientific theories with a view to their application in the field of state defense.

At the same time, the creation of a separate interdepartmental structure will require the development of a normative legal basis for its functioning. First of all, we need a clear order of interaction with federal executive authorities, organizations of the military-industrial complex, the Russian Academy of Sciences, higher schools and scientific research organizations of the Ministry of Defense, small innovative firms and even individuals. Ultimately, the implementation of such a project may be one of the conditions for ensuring the accelerated introduction of new technologies in weapons samples.

What will the Armed Forces

For the Navy must purchase order 100 ships, including 20 submarines, 35 corvettes, 15 frigates, as well as support ships. In addition, the projects of the new multi-purpose nuclear submarine of the fifth generation and destroyer are being worked out. The main armament of these ships will be the Caliber unified ship-based missile system, which includes both anti-ship cruise missiles 3М 54 and long-range cruise missiles 3М 14 to destroy enemy ground targets. Planned work on the creation of the shipborne missile system "Zircon-S" with a hypersonic rocket.

In terms of reconnaissance and communications equipment, the main activities of the GVO-2020 are associated with the implementation of two large projects - equipping the Ground and Airborne Forces brigades with a single tactical command and control system, as well as creating information-controlled systems to ensure the use of precision weapons.

An interdepartmental complex target program has been formed by means of military equipment of servicemen. The priorities here are the development of multipurpose individual modular equipment and melee weapons.