Why Pogosyan's tail turns the rest of the dog - 2 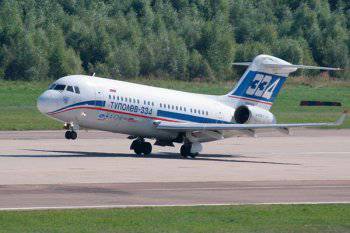 Recently on the table among the mail found a letter. Signed letter! Because they were written by professionals who are ill for the cause, specialists of the famous Tupolev OJSC. Not retirees and pensioners. Its content fully confirms and systematizes a mass of scattered information that has accumulated in interviews and documents. And this is a view from the "inside", from the mysterious and dark depths of the domestic aircraft industry, bending under the control of effective manager M. Pogosyan. We give it with minor editing and a minimum of explanations.

Employees of Tupolev OJSC read with great interest your article “Why does Pogosyan’s tail spin the rest of the dog?” In 29 (371) from 01 in August 2013 of the year, which caused a lot of questions and discussions. The article is undoubtedly correct and topical, but there are thoughts about the absolute irresponsibility and lawlessness of senior officials and leaders of the country for their decisions and the results of their activities. Recently, there have been many publications in the media about the ineffective activity of the United Aircraft Building Corporation (OAK) and its head, M.A. Pogosyan, but "things are there."

It is good that Deputy Prime Minister Dmitry Rogozin understands that the civilian market aviation in the Russian Federation is largely lost by our industrialists and production workers, and it is urgently necessary to restore the prestige of the design bureaus. But manufacturers and designers are placed in conditions that lead to the complete collapse of their enterprises. As for the measures taken, it was just the creation of the KLA. As it came to society, this measure will make it possible to gather all the remaining production and design forces into a "fist". But it turned out that the KLA created to maintain only the corporate interests of individuals, industries and intermediary missions for possible projects of other, foreign, firms.

As for the tender for a new regional aircraft, a small inaccuracy has crept into your article. Two projects competed: Tu-414 with the layout on the 70 seats (and not its “short” basic modification of the Tu-324, as we wrote. - Editor's note.) of the company “Tupolev” and Sukhoi Civil Aircraft CJSC RRJ-75. All the conclusions of the industry institutions and the State Civil Aviation Institute for the Tu-414 project were positive. According to the expert council for the preparation of tender documents, the draft of the new regional aircraft Tu-414 corresponds to the appearance of the new generation of aircraft, is competitive with Western counterparts CRJ-700, EJ-170 and Russian-Ukrainian An-148. According to the same expert council, RRJ did not meet the requirements of the technical specifications (TK) for the competitive development of a new regional aircraft.

Without taking into account the inefficient aerodynamics of the RRJ aircraft, its risky layout for operation and the fact that GSS CJSC had no experience in building civil aircraft, the representative of the commission, Yu.N. Koptev, General Director of Rosaviakosmos. It was decided to approve the project RRJ as the winner. It was by this decision that Koptev laid a negative result in the creation of this aircraft, and no one corrected it. But this is a matter of national importance.

As a result of the received and “assimilated” multi-billion budget funds, GSS CJSC created a completely non-regional SSJ-100 (Dry Superjet 100), low reliability and inefficient in operation. This is called the misuse of budget funds, but it does not bother anyone and does not interest. The unsuccessful SSJ-100 of Pogosyan "crossed the road" not only for the Tu-414, but also for the larger short-range Tu-334.

Confirmation of the negative activities of the KLA (to put it mildly) is the project to modernize the Tu-204CM aircraft. KLA acted in the framework of these development work (R & D) not only as the Main Executive, but also as the Customer. (So ​​here is the result of the aviation industry reform! - Approx. Ed.) Having received budget funds in 2008, UAC ordered the developer of the Tu-204 Tupolev JSC drawings and certification works, production of the aircraft - Aviastar-SP; modernization of the main engine - Aviadvigatel OJSC, AU VSIL - Aerosil, NPO - MIEA, KSCV - NPO Nauka, etc.

As a result, Tu-204CM airplanes for certification tests were manufactured at a low quality level; technical conditions (TU) didn’t even stipulate warranty obligations on the aircraft side of the production plant and manufacturing plants for components (CI). A large number of components installed on the aircraft, were recorded in the forms: "Suitable for testing."

The state required (and is required to this day) a regional aircraft on 70 – 75 seats. But Mr. Pogosyan’s RRJ, due to the lack of civil aviation engineering at the last school, began to gain weight and dimensions. And the swollen on the eyes of RRJ-75 (Russian Regional Jet) from the regional turned into the trunk SSJ-100, where it was already a long time certified and ready for mass production of Tu-334 on the 102 passenger. The “Superjet” didn’t become a regional horse - the design is too delicate, it doesn’t suit flying on fly-wrenches. Airline operators are now tormenting him - super-aircraft too often have equipment failures. But with Pogosyan’s hands, all possible financial resources of the industry are redirected to this liner. Accordingly, the “Tupolev” machines, the Tu-204CM and Tu-334, for which there are real customers, have nothing to do with the head of the KLA, except for deaf irritation.

Tupolev OJSC was forced to take a glider with equipment installed on it for certification testing, as it is written in the Agreement with Aviastar-SP CJSC for the rental of Tu-204CM prototype aircraft. In the course of certification tests, we had to deal with bringing the aircraft systems to a typical design and constantly eliminating failures (engines, APU, KSKV units and other equipment). At the direction of Pogosyan, Aviastar-SP CJSC ceased the production of the third prototype Tu-204CM, which was scheduled for certification tests, which means that the test periods were lengthened.

When the main budget funds were mastered, the KLA "stepped aside." In 2011, contracts for the completion of work on the modernization and certification of Tu-204SM aircraft Tupolev OJSC entered into directly with the Ministry of Industry and Trade. The certification period (31.07.2012) of the aircraft was disrupted, and the Ministry of Industry and Trade set up “Tupolev” fines in the amount of about 32 million rubles. To complete the certification of the aircraft, JSC Tupolev was forced to take funds from the KLA 845 million rubles under the loan agreement. Taking into account that OJSC Tupolev has nothing to give this money, it becomes obvious: UAC brings Tupolev to bankruptcy.

Now an addition to the type certificate has been received, but the Tu-204CM has no buyer. UAC, which ordered this aircraft, it does not care. Concerns on the promotion of the aircraft to the market have now moved to OAO Tupolev. It seems that the fate of the Tu-204CM will be the same as that of the Tu-334. Pogosyan’s position is known: “There is no Tu ‑ 204CM aircraft - there is no competitor to my Superjet.

As for the measures taken, which mentioned the DM. Rogozin, the country's top leadership back in the year 2011 "chopped off" all the attempts of a potential customer A.Ye. Lebedeva buy 44 Tu-204SM aircraft for the Red Wings airline.

The multibillion-dollar squandering of Pogosyan's budget funds at the level of defendants in the Oboronservis case may seem like "pranks" if you carefully consider the collapse of the Tupolev design bureau, the only one in the country that is still capable of creating passenger aircraft and strategic missile carriers.

As a result of transformations carried out at the company MA. Pogosyan and A.P. Bobryshev (General Director of Tupolev OJSC, Pogosyan's appointee - Ed.), All kinds of directorates and structures that are not functionally connected are organized, there are no new projects. Therefore, young cadres do not see prospects for themselves, the old ones are freed from their obligations, and they could still help in their work.

In OJSC Tupolev there is no separation of designers on civil and military subjects, and the collapse of the civil sector pulls the military. Work on the creation of a promising long-range aviation complex (PAK DA), the modernization of Tu-22MZ and Tu-160 aircraft (supersonic carriers of strategic weapons. - Approx. Ed.) just "stalled." This question should be of particular interest to Deputy Prime Minister Dm. Rogozin.

The plundering of budget funds, the collapse of aviation enterprises and as a result: huge material losses, lost profits in the aviation industry - actions that should be of interest to law enforcement agencies. But for some reason this is not. And the moral damage from these acts? In OJSC "Tupolev" the pilot production and bench facilities are completely collapsed. The workers, to whom the Tu company has its own, my own, tears come to my eyes when they see corps of residential houses that have grown on the site of the enterprise’s workshops. Who will answer for all this?

As for your publication, its result is the dismissal of V.I. Skrypnik. Under pressure from the leadership, he had to resign, as they say, "punishing the innocent." For this reason, people did not sign this review on your article by name.

After the MAKS-2013 creaked, because of the reluctance of Pogosyan, the Ilyushin Finance Co. leasing company still signed agreements on the supply of twenty Tu-204CM to Red Wings domestic airlines and VIM-Avia, it seemed , you can not worry about the fate of a good Russian liner. But it was not there! To translate the agreement into a firm contract, the KLA creates a working group. And silence ... It is the same as in the "Tupolev" part of the shops of the Aviastar-SP aircraft factory in Ulyanovsk. Recently I saw there the fuselages of the unfinished Tu-204 frozen on the stocks.

Near any worker. I wondered why? The answer confirmed the information from the letter - Pogosyan has forbidden to engage in this aircraft. But Aviastar was still lucky, the work was thrown up by his native Defense Ministry - in a gigantic workshop, they were working hard on the first three serial military transport Il-76MD-90А. It is pleasant to watch - the masses of heavy machines are stuck from top to bottom by the assembly experts, the lights are twinkling, the tool is rustling. And behind the gates, on the court, - “misleading Cossack”: they are preparing to roll back the next “Superjet” for Aeroflot for painting. In the airline he is not very happy, but there is no way to refuse - the administrative resource of the KLA President is great and powerful.

Ctrl Enter
Noticed oshЫbku Highlight text and press. Ctrl + Enter
We are
Why does Pogosyan’s tail spin the rest of the dog?List of destroyed the largest and most high-tech enterprises
97 comments
Information
Dear reader, to leave comments on the publication, you must to register.