Shame called "Mistral." This ship is a foreign body in the Russian Navy.

November 20 2013
179
The first universal landing ship (UDC) of the Mistral type was launched in Saint-Nazaire. The ceremony was extensively covered by domestic media, especially television, attended by French and Russian senior officials, including the Commander-in-Chief of the Naval fleet Admiral Victor Chirkov. Both sides have repeatedly stated that the ships will have powerful weapons that will solve a wide range of tasks, including the transfer and landing of marine infantry, ensuring the management of operational fleet groups in various regions of the World Ocean, and performing the functions of a floating hospital and anti-submarine functions. However, upon closer examination of the situation, UDCs are a bluff.


It is especially emphasized that the Mistral armament will be of Russian production with high offensive and defensive potential. The composition is defined and presented to the general public, so that it is already possible to assess its real combat capabilities. Since this is primarily a universal landing ship, the main indicator is the number of troops being deployed and landed. That's all right - 450 Marines, 40 – 70 armored vehicles. It is worthy of opportunity, but only on paper.

The Ka-29 transport-combat helicopters based on board have a payload of up to four tons and can accept up to 16 soldiers. This means that no armored vehicles can be transferred by air, at best, light vehicles. All the rest will have to be delivered to the coast by landing craft, that is, by boats. But the UDC itself does not allow disembarking directly from its board to the unequipped coast. 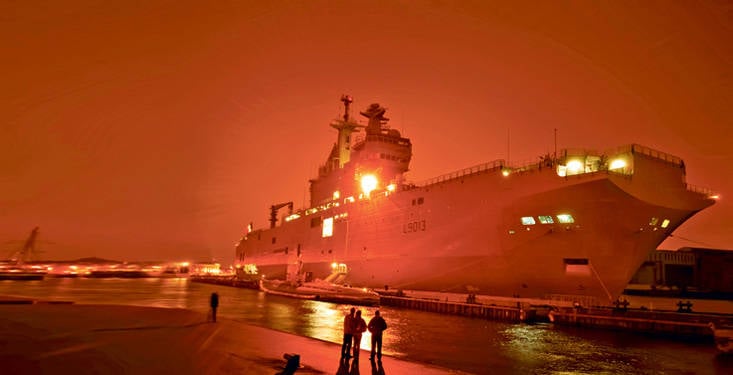 Helicopter assault in the enemy’s operational depth is intended to prevent the enemy reserves from approaching the area. It is supposed to have eight Ka-29 helicopters in the air group; this makes it possible at the same time to transfer up to two reinforced marines platoons with the necessary equipment and weapons for independent actions in the depth of the enemy defense. Re-departure will be associated with large losses and are likely to become impossible. Two reinforced platoons are clearly not enough to prevent the enemy's reserves approach and have a significant impact on the battlefield for landing. That is, the decisive action will be landing, landing from boats.

Then the question arises: why not take advantage of the large amphibious ships that are already in the Russian Navy or restore the 1174 project like "Ivan Rogov"? They will be able to carry out an attack on an unequipped coast more efficiently than the French UDC, since they not only use boats, but also land troops and equipment directly from the board through a ramp.

Further. The only thing that can have a significant impact on the course of the Mistral battle is fire support by eight full-time Ka-52 Alligator. However, helicopters are of great importance only out of reach. aviation coast-based, and in such areas landing is generally impossible. After all, landing operations without gaining dominance in the air are not carried out. And where front-line attack aircraft and bombers will fly, landing from the air to ensure an attack from the sea can be carried out by military transport aircraft on a larger scale.

So, the UDC will not give a significant increase in the effectiveness of landing operations against a little bit serious opponent. Their value increases where the enemy is unable to put up strong resistance and the UDC air group operates relatively freely. However, at the borders of Russia there are very militarily developed states and their blocks, in particular, NATO, and therefore there will be no opportunity to express themselves in all their glory with the domestic Mistrals. And the tasks to land the marines at remote theaters are not in front of our fleet and are unlikely to stand up.

In general, the direct (“neo-colonial”) purpose of the UDC is not needed. The competence of those officials who refer to amphibious actions is very doubtful.

Ship without means of self-defense

Mistral’s ability to defend itself is also in question. Judging by open sources, it is not supposed to have anti-torpedo protection at all. In addition to submarines, anti-ship missiles are dangerous at low and extremely low altitudes. And the air defense systems are represented only by four systems - two anti-aircraft artillery complexes (ZAK) AK-630 and two anti-aircraft missile systems (ZRK) 3М47 "Gibka", located on the sidelines in sponsons. 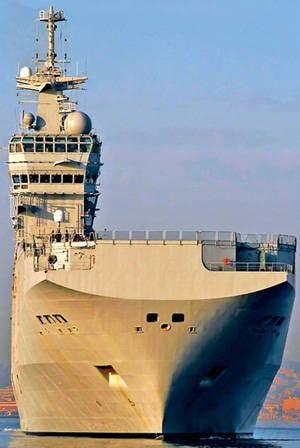 The AK-630 is a six-barreled 30-mm automatic gun placed in an uninhabited turret, which is controlled by firing radar data. The complex was adopted by the Soviet Navy at the end of the 60-s, and is widely used now. Its ability to defeat air targets, especially cruise missiles, is very limited. Immunity is low, so hitting targets with modern electronic warfare is very difficult.

3M47 “Bending” is six to eight containers of Igla MANPADS placed on a stabilized turntable with an optical electronic detection and tracking system for aerial targets. For the self-defense of a ship, the possibility of destroying air objects on a collision course is of importance. You can’t count on shooting in pursuit, as surely getting into the “Mistral”.

The firing range of the “Needle”, especially at the front hemisphere of the target, is determined not so much by the rocket’s energy, as by the distance of its homing head operating in the infrared range. According to the open press, in polygon conditions with a clean atmosphere, such a range does not exceed three kilometers on a tactical aircraft of the Phantom type, and the probability of its destruction is 0,4 – 0,44. Accordingly, the capture of a cruise missile, even in ideal conditions, is even more problematic, not to mention defeat. Well, in the case of light haze or fog (such weather conditions prevail most of the year in our coastal seas, especially in the Pacific Ocean), the effectiveness of self-defense UDC tends to zero.

That is, regular air defense systems are incapable of providing security even from single attacks. At the same time, there are very modern models in Russia capable of repelling an air attack. For example, ships of the same 1174 project have the Osa-M air defense missile system, four ZAK AK-630, one ZAK AK-726 and the same Igla MANPADS. With such a composition of weapons they are not threatened with single air strikes.

It is not clear why the Mistral air defense system is so weak. Perhaps our modern and very effective means of defense are incompatible with the French combat information management system (CES) Zenit-9. Then why does Russia need this BIUS, and at the same time the Mistral itself?

Special equipment is caused by equipping this ship with long-range missile systems Onyx and Caliber. The ship with the main course of all 18 units, defenseless from an attack from the air and from under the water, has a powerful strike weapon, like a missile cruiser.

Against whom and how will the big stick be used? It cannot act as a part of large surface connections due to low-speed and weak self-defense. The calculation of independent actions in the interests of the warrant is also groundless, since the composition of the volley is limited (except for anti-ship missiles, the air group, troops, landing craft, etc., are stationed on Mistral, and the ship is not rubber), it cannot overcome air defense of modern fleets. In addition, the main means of destruction of large ship groups is likely to be aviation.

It is completely inexplicable to equip the UDC with the Caliber complex, which is focused on strikes against ground targets in the operational and strategic depth. The intersection of the snake and the hedgehog took place.

В stories military shipbuilding is an unprecedented case of meaninglessness. It seems that the ideologues and initiators of the Mistral purchase do not even have a rough idea why our fleet needs them. In order to somehow justify billions in spending, they were decided to equip them with weapons for all occasions, without operational and tactical justifications.

At the same time, ideologists could justify the deal with the prospect of having light aircraft carriers in the Navy that have a place in our Armed Forces. Unlike the Mistral.

Ctrl Enter
Noticed oshЫbku Highlight text and press. Ctrl + Enter
We are
Limited combat capabilityShip for all occasions
179 comments
Information
Dear reader, to leave comments on the publication, you must to register.