"Ipritovaya" threat in the Crimea 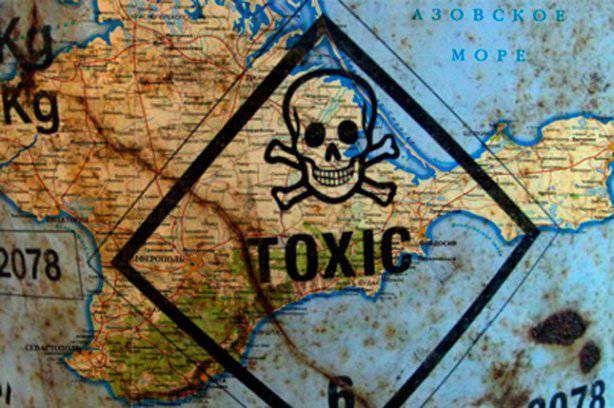 History humanity is closely intertwined with the history of wars and bloody conflicts. Each side used all possible methods and, of course, new types weapons to achieve victory. The first use of chemical compounds by the Germans in the battle of the Belgian city of Ypres in April 1915 was just such an unexpected weapon. The effect was so stunning that it became clear to all: humanity had entered the era of chemical wars. Before the atomic attack on Japan in August 1945, chemical weapons were considered the deadliest weapons on earth.

Prior to the outbreak of World War II, many countries accumulated toxic substances (agents) in arsenals, increased production and conducted research to create even more deadly chemical weapons.

But with the development of technologies for the production of chemical agents, a situation has arisen when the old and sub-standard chemical weapons began to interfere with the creation of more advanced ones.

It should be noted that decisions on the disposal of hazardous substances were taken in difficult political periods for the state without taking into account the subsequent environmental risk to the population.

For example, in the tsarist army of Russia, as well as later in the Red Army, containers with toxic substances were buried in the ground to a depth of 2 arshin near the storage or production sites. The chemical troops of the Soviet Army also had orders for the disposal of chemical weapons. And, unfortunately, one such place where the burial of Soviet chemical weapons took place was the waters of the Black Sea.

In 1995, the media published N. Semyon’s materials, which claimed that in 1941, before the Germans seized the Crimea, Soviet chemical chemists removed a large number of containers with chemical weapons (mustard and lewisite) from warehouses. And all these chemical weapons were “hidden” at the bottom of the Black Sea. The military had no right to leave this terrible weapon to the enemy, and besides, the use of these chemicals was prohibited by the decisions of several international conventions, so the presence of agents in the arsenals of the Soviet troops should have remained secret.

The author of sensational materials published in the 90s, referred to the recollections of the captain of the first rank N. Rybalko, who in the period 1938-1945. Acted as the flagship chemist of the Black Sea fleet. N. Rybalko wrote: “Chemical ammunition was exported for several nights to the pier in Cossack Bay, where they loaded onto the Papaninets schooner, which with this cargo went to the point of the open sea indicated to it with a depth of at least 50 meters, where this was dumped from it cargo at sea. By June 29, this operation was safely completed. There was nothing left for the enemy. ”

There were other eyewitnesses to those events, which claimed that the tanks with poisons were thrown away in a hurry off the coast, including the waters of Sevastopol. These words are confirmed by residents of Sevastopol, who remember that in the post-war period, in the hot season, in some places near the sea, there was a smell inherent in mustard gas and lewisite. Many Sevastopol residents were aware of such points and tried to avoid swimming near dangerous territory.

Also, a number of media operate with information that during the conduct of hostilities during the war years, toxic substances were transported by sea, and quite often ships were destroyed by German aviation. For example, in 1942, not far from the Mine Wall, the Germans flooded the Georgia medical transport transporting mustard rockets.

In the post-war time, fishermen began to come across barrels of "poisons" after they had mastered trawling. Especially a lot of such “terrible” finds began to be raised in the 70-s near the Snake Island. But barrels of chemicals were found in other areas of the Black Sea. No one has kept statistics on the capture of these deadly containers. But there are suggestions that after the war, the container with the "chemistry" was flooded in the Black Sea. Of course, in Soviet times, information about this had a secret status, and after the collapse of the USSR, it is believed that the information is irretrievably lost.

In 1993, Ukraine joined the international convention on the prohibition of chemical weapons. Despite the difficult political and economic situation, in 1996, the Ukrainian government approved a program for the search and disposal of chemical weapons in the Black Sea, in the part that belongs to Ukraine. And although initially the program was planned to be completed by 2002, but the deadlines were extended several times. As of the 2013 year, it is considered that the disposal works are still ongoing. According to a survey conducted on the instructions of the Ukrainian cabinet in 2004 by Sitall, in eleven areas of the Black Sea, about 500 containers with lewisite and mustard gas were found. The head of Sitall believes that no less than 1200 of such containers with “poison” can be located near the Ukrainian Black Sea coast, and 300 of dangerous containers may be located in the waters of the Sea of ​​Azov.

It is still not known what kind of work and in what volume on the finding and destruction of chemical weapons in the framework of the program adopted by the Government of Ukraine have already been completed. The technology of neutralizing chemical weapons is quite laborious: containers are placed in a sarcophagus, which is poured with special concrete directly at the lifting point from the bottom of the sea, and then towed to a depth of at least 130 meters.

According to experts, the deadline for the destruction of the shells of containers with chemical weapons has already expired, dangerous poisons may well already fall directly into the waters of the Black and Azov Seas. Unfortunately, these warnings were heeded only by the media, and not by officials of the Ukrainian government. In one of the plots prepared by the NTV channel, it was told that during the survey of sea water near the Swallow Nest, the level of arsenic exceeded the norm a hundred times: it was in this place that 20 barrels with toxic substances were supposed to be flooded. 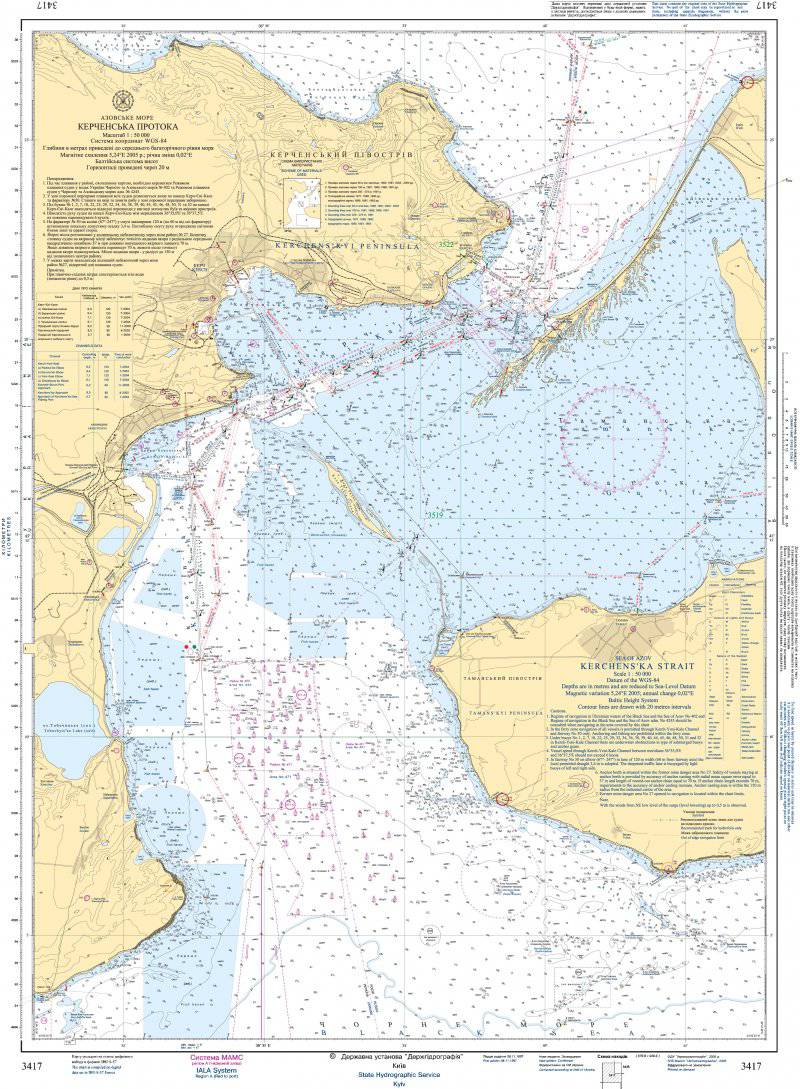 The authorities of the Crimea reacted to this information as to the attempt of the Russian TV channel to disrupt the holiday season on the coast of Ukraine.

At the same time, the head of the Ministry of Emergency Situations of the Crimea confirmed the fact that the containers with hazardous substances in the Black Sea area were located at a distance of 15 kilometers from the coast and at a depth of 150 meters. However, in his opinion, they do not pose a danger to holidaymakers. He was joined by some scientists who believe that the barrels of chemical agents are at a depth where the temperature is 5-9 degrees, and this circumstance contributes to the fact that the chemical substance OM polymerizes and does not dissolve in water.

Time has revealed some interesting details of the implementation by the Ukrainian authorities of a program for the disposal of chemical agents. Thus, according to information published by the Ukrainian edition of The Mirror of the Week, the program for the neutralization of chemical weapons in the Black Sea has turned into a huge "sawing" of allocated budgetary funds. The publication led to the proof of the correspondence of several departments involved in the implementation of the program. One of the documents presents the opinion of Valeriy Kukhara, academician of the Institute of Bioorganic Chemistry and Petrochemistry, who claims that only 113 containers with chemical agents were neutralized over the entire time. Most of them have not been transported to a great depth and “at present they are in working condition in the monolithic state, are silted into the soil with navigation threats to ships”. In the near future, as a result of corrosion, they will be destroyed, and, therefore, due to "an extremely strong mutagenic effect of submerged chemical warfare agents that can affect the genetic code even at minimal concentration", poisons can cause irreparable damage to the region’s ecology. 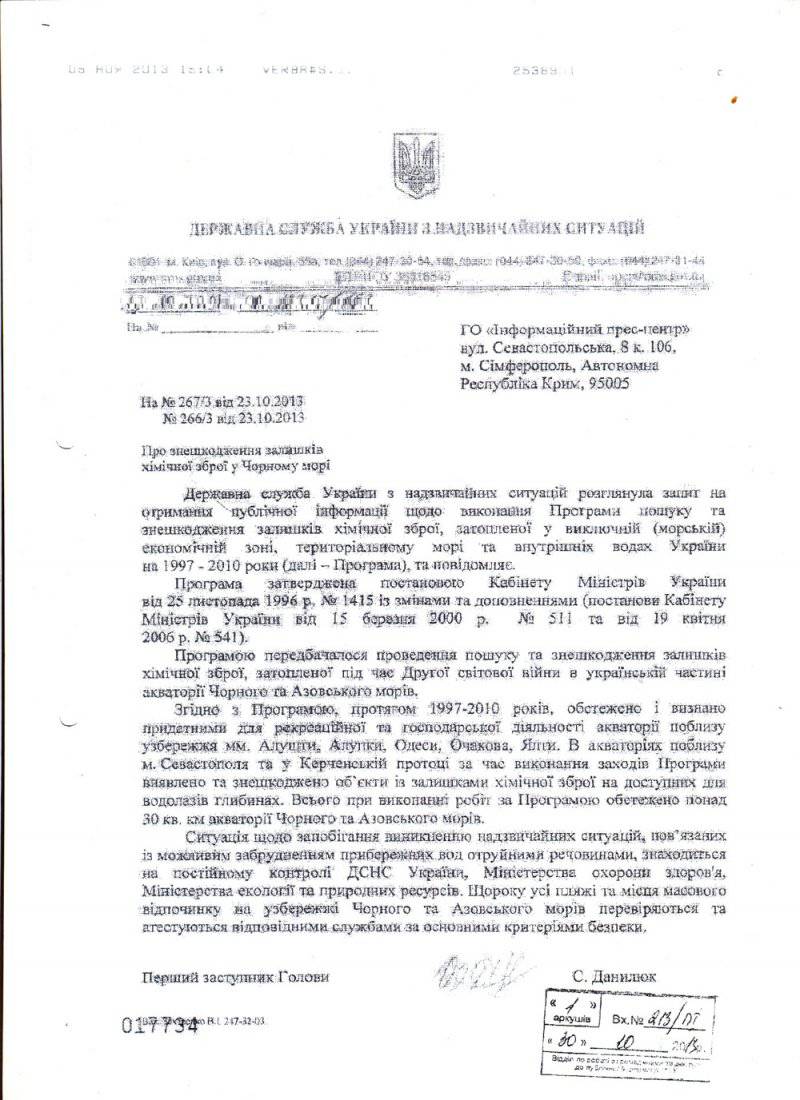 Another high-ranking official of the Ukrainian government, the head of the Chamber of Accounts, V. Symonenko, addressed the president with a letter in which he spoke about the results of a survey of chemical weapons flooding areas. V. Symonenko wrote: “In the area of ​​the settlement of Geroevskoye, which is a zone of mass recreation of the population, the arsenic content in the water sample exceeds the permissible level 3,5 times. The partially destroyed container L 2007 with chemical weapons, found in July in the area, still remains non-monolithic at the site.

The certificate prepared by P. Nebotov, Head of the Department of Defense and Security of the Ministry of Economy, was also made public. In it, he argues that, despite the long-term implementation of the program, the Crimean coast has not yet been fully examined for all chemical weapons disposal sites.

As a result of the audit, it turned out that the program was executed only on 36%, and from 50 millions of hryvnas allocated for the program, 76% of all funds were used with violation of the current legislation or ineffectively. Despite the violations found, there were no proceedings: The Court of Accounts slightly "scolded" the Ministry of Emergency Situations, stating that for the money spent on the program "it was possible to clear the Black Sea bottom from the dangerous legacy of war for a long time." 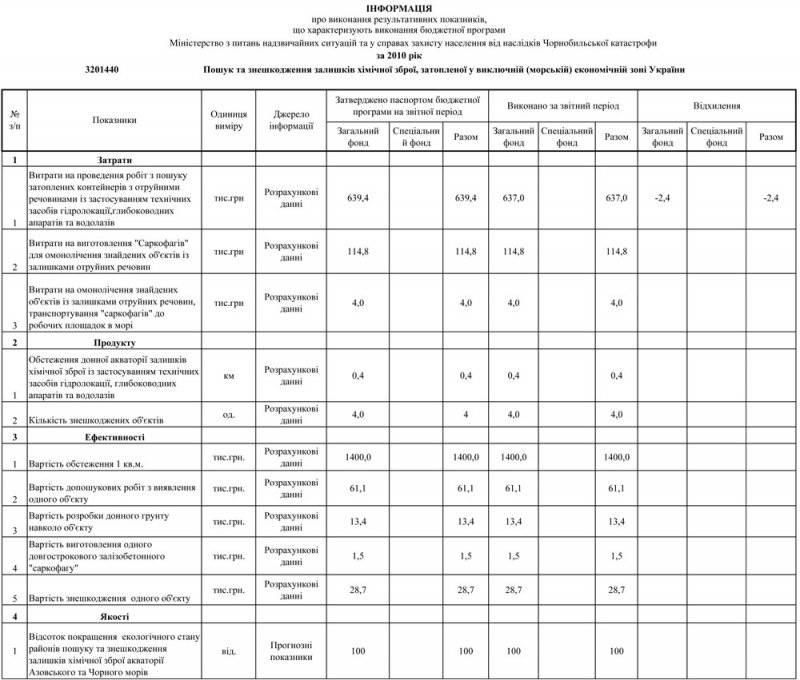 The Government of Crimea and some departments have repeatedly appealed to the leadership of the country with a request to allocate funds to continue the work on the disposal of chemical weapons, but their requests remained unanswered - the program actually turned out to be “buried”.

Against this background, the fact of V.Yanukovich’s proposal, made by him to the Syrians, on assisting in the destruction of their chemical weapons is somehow not taken very seriously and adequately.

Ctrl Enter
Noticed oshЫbku Highlight text and press. Ctrl + Enter
We are
"The Bane of the Century" or the discovery of Dr. SchraderChemical weapon. Elimination or improvement?
Add a comment
Information
Dear reader, to leave comments on the publication, you must to register.