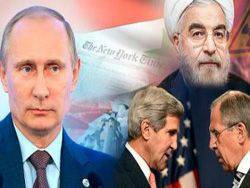 U.S. overloaded enormous internal problems, once again set out to get out of their difficulties by defeating Russia in the global competition for oil and gas fronts. The oil - with the help of Saudi Arabia, on the gas (and partly potash) - via Qatar. Syria in this economic war - one of the most significant for the Russian borders.


Saudi Arabia is an American instrument of control over the supply of oil and pressure on Iran and Russia through the threat of replacing their oil to all the largest importers of the planet. This is done according to a scheme that was worked out back in 1980, when the Saudis, by agreement with Washington, shot down the price of oil to 10 dollars per barrel, nulling the main income item of the USSR budget, which hastened the end of the Soviet superpower. Washington, which does not possess such a mechanism with regard to natural gas, is at the same time perfectly aware that Russia, having about a third of the world's gas reserves, can be the world leader in this field. And the strength of the geopolitical position of the state today depends more on control over deposits and ways of transporting gas rather than oil.

Since the beginning of the “Arab Spring” and aggression against Syria, Qatar began to play one of the key roles in the anti-Russian plans of the United States, which has: a) enormous gas reserves for which this small country has already overtaken Gazprom, b) a huge fleet of 54 special class vessels Q-max and Q-flex for the transport of liquefied gas; c) the world's largest gas field, Severnoye, whose development moratorium will end in 2014. It was then, most likely, that the decisive battle for Syria will take place and a massive “gas” attack on Russia will begin ...

The monarchies of the Persian Gulf, who, together with the United States, supported “democratic changes” in a number of countries in the Middle East, remain dictatorial regimes themselves. Therefore, the boomerang of the “Arab Spring” launched by them will inevitably return to them. The only way for them to divert the energy of the revolutionary explosion from themselves is to try to redirect this energy to the outside. The vector of aspirations of the Saudis and Qataris is the northeast, while Syria, Iran are the “targets”, and at a later stage, the Caucasus and the Volga region.

Qatar is not just a tool to control gas supplies and squeeze Russia out of the European market. It is assumed that the loss of the EU gas market will turn into a catastrophe for the Russian budget. Strictly speaking, a political entity such as Qatar is a British creature strengthened by the US Army. At the same time it is a branch of Western TNCs. Like Saudi Arabia, Qatar has long been a center of international terrorism, sending militants to Libya, Syria, Egypt, Algeria, and the Caucasus. At the time, the Qataris, having 12-thousandth army, threw more than 5 thousand special forces into the decisive battle for the Libyan capital Tripoli.

The ideological support of Qatar’s policies is carried out by Al-Jazeera TV channel and a number of influential Islamist figures such as the chairman of the World Council of Islamic Theologians Yusuf Al-Qardawi, who took an active anti-Russian position during the years of the first Chechen campaign. Qatari openly welcome the leaders of Chechen terrorists like Zelimkhan Yandarbiev, finance the Syrian "rebels" who aviation Qatar throws a huge amount weapons via Turkey and Jordan. However, the main direction of the strike of the Qataris and their western patrons is connected not with military operations, but with the economy.

Qatar is already leading a price war against Russia. Under the nose of Gazprom, Qatari work in Belarus, in the south and north of Europe they are building re-gasification terminals, probing the possibility of building terminals in England, the Netherlands, Turkey, Greece, etc. Qataris do not cost anything to openly beat a Russian diplomat with the rank of ambassador. Emir of Qatar, Sheikh Hamad bin Khalifa al-Tani, whose main office is located in London, has already eliminated or neutralized all Russian oil and gas projects in Qatar - 5 large, billions, like Yamal LNG, and 18 estimated at hundreds of millions of dollars. The same is done with gold mining projects.

Qatar is the owner of 30% of the shares owned by the Rockefellers Exxon Mobil Corporation - the energy monter who became the main beneficiary of the occupation of Iraq and is one of the main lobbyists of the war against Syria. It was this corporation that the puppet regime in Baghdad gave after the overthrow of Saddam Hussein the monopoly right to develop Iraq’s oil reserves for 50 years. Since Europe is the main consumer of Russian gas, Exxon is seeking to implement an alternative Qatar-Europe gas pipeline project. There is a self-interest in this project and the owners of the Washington White House.

The ousting of Gazprom by the US-Qatar alliance automatically leads to a fall in hydrocarbon prices, with all the ensuing consequences. The matter is small - to destroy Syria and all the Middle Eastern infrastructure connected with Russian energy projects, first of all pipeline: approximately as it was done after the turn in 1970 of post-Assier Egypt from Moscow to Washington, which was accompanied by the destruction of the infrastructure created by the Egyptians for money Moscow, and the transformation of Egypt from the leader of the Arab world into a third-rate state.

Syria want to destroy in order to:

1) to take control of not only the newly discovered gas fields Syrian between Damascus and Homs, but also the entire territory of the country, seen as an important geo-economic crossroads of the Middle East, an alternative seaway transportation of hydrocarbons. Oil and Gas Gulf monarchies are critically dependent on the transport route through the Strait of Hormuz. Enough to block this way for a few months - and the crisis economies of the Saudis, Qataris and Europeans inevitable;

2) replace gas supplies to Europe from the north (from Russia) with supplies from the south (from US vassals in the Gulf), because after the fall of Assad, even if Iran blocks the Strait of Hormuz, a gas pipeline to Europe can be built, allowing Qatar to replace Gazprom.

In the meantime, the Americans and Saudis are in a hurry to deprive the Syrians of chemical weapons and master the Libyan oil. The Qataris, who quietly ransomed 6% of the European Union market (as a result of which Gazprom’s share there fell by 2%), crush the Libyan gas industry and target the reserves of another gas power - Algeria, which still retains sovereignty in gas production (Qatar is already supplying weapons and jihadist thugs to Algeria).

The approaching 2014 year will be decisive for the fate of Syria as the Middle East frontier of Russia. This year a) it will be impossible to postpone further solving the internal problems of the United States, b) chemical weapons will be destroyed in Syria, c) the moratorium on the development of the world's largest gas field "Severnoye" will end on the border of Qatar and Iran, Qatar will complete The fleet will create infrastructure for LNG supplies (a port on the coast, a series of super gas carriers, regasification terminals in the EU) and will be part of the ownership of European gas transmission systems.

The main task of Russia's foreign policy in the Middle East in 2014 will be to prevent the destruction of Syria and the "democratization" of the similar scenario of Algeria.

Ctrl Enter
Noticed oshЫbku Highlight text and press. Ctrl + Enter
We are
What we lostThe past, present and future of Russia's energy strategy
43 comments
Information
Dear reader, to leave comments on the publication, you must to register.