Tajikistan: what prevents the return of Russian border guards? 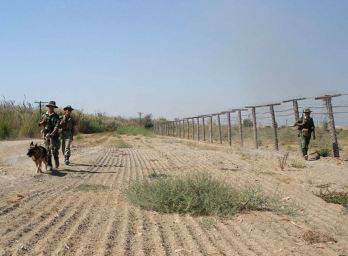 The key theme of the September summit of the CSTO in Sochi was the “2014 problem” - the development of the military-political situation in Central Asia after the US’s withdrawal from Afghanistan. The greatest concern is the state of the Tajik-Afghan border, the longest (1344 km) of the borders of Afghanistan with the republics of the former USSR. However, the decision to return the Russian border guards at the summit was not taken. Instead, it was decided to limit military technical assistance to Dushanbe.


The fact that the return of Russian border guards to Tajikistan is not planned was announced on September 23 by CSTO Secretary General Nikolai Bordyuzha. To protect the border, in his opinion, the existing national contingent is quite enough. In addition, the CSTO plans to provide assistance to Tajikistan, which will drastically improve the border security situation. On October 2, information really appeared about large-scale deliveries of Russian equipment to Kyrgyzstan and Tajikistan. According to Kommersant, Moscow agreed with Bishkek and Dushanbe on the product range that it would supply them with as military-technical assistance. Of which $ 1,1 billion will go to Kyrgyzstan, and $ 200 million to Tajikistan, for which he will receive Aviation, communications, artillery, air defense and small arms weapon. But will this weapon allow to drastically improve border security?

Russian border guards in Tajikistan: before and after

A group of border troops of Russia in Tajikistan was formed in 1992 and existed until the summer of 2005, when it was withdrawn at the request of the Tajik side. All this time, Tajikistan was in the lead among the other republics bordering on Afghanistan in terms of the amount of intercepted drugs. In total, more than 30 tons of drugs, including more than 11,5 tons of heroin, were discovered and destroyed by Russian border guards. Only from 2002 to 2004, about 2 tons of drugs were intercepted, 1,7 tons of which amounted to heroin. In addition, the border guards destroyed more than 3 thousand militants and prevented many attempts to violate the border. And this is in conditions when the civil war was going on from 1992 to 1997 in the republic, and the units of the United Tajik Opposition, which was assisted by the Afghan Mujahideen, were on both sides of the border.

With the departure of the Russian border guards, the Tajik-Afghan border guard quickly weakened. Tajikistan had neither experience nor military-technical capabilities for this. After the fall of the Taliban regime, drug production in Afghanistan increased 40 times. Having no special obstacles, they flooded into Russia and Europe. Tajikistan and Kyrgyzstan became key points of their transit, from where drugs get to Kazakhstan and then to Russia. To intercept them on the huge (more than 7 thousand km.) And poorly guarded Russian-Kazakhstan border is much more difficult than in Tajikistan. According to the head of the Federal Drug Control Service, Viktor Ivanov, about 100 thousand people die from drug use every year in Russia. And, above all, people in active and working age, who are so lacking, die.

It is no coincidence that the idea of ​​returning Russian border guards to Tajikistan was launched in June 2010 by V.Ivanov. However, it did not arouse any enthusiasm from official Dushanbe. A whole series of materials and comments of experts appeared in the Tajik media, proving that the republic is quite able to cope with border security on its own. Meanwhile, the inspection visit of a group of CSTO military advisers led by the organization’s deputy secretary general, Gennady Nevyglas, at the end of August this year showed that the situation on the border is far from ideal. The personnel of the border guards are fully staffed, but the level of their technical equipment leaves much to be desired: there is no aircraft, night vision devices, optical sights and other tracking devices. As a result, Tajik border guards are not always capable of repelling incursions by large and well-armed militant groups on their own.

Who will protect the border?

The place of Russia on the Tajik-Afghan border, tried to take the Americans. In November last year, it became known that the United States allocated about $ 2 million dollars to Tajikistan to equip security forces with communication systems. In addition, two border posts were built on the Tajik-Afghan border, built with US assistance. In 2009, the Americans made a proposal to create mobile special forces groups that could operate on the territory of all five Central Asian republics, freely crossing the interstate border. In practice, this proposal was not implemented, but in fact the Americans crossed the border. So, in September 2010, they helped the Tajik border guards repel an attack by an armed group, which resulted in the death of 20 militants and one soldier. Independently, according to the Americans, the Tajik military would not have coped with them. Later, the US Central Command confirmed that “in some cases” US special forces were allowed to penetrate the territory of Tajikistan, Turkmenistan, Uzbekistan, and Kyrgyzstan to fight the militants.

The ability of Dushanbe to control remote regions also causes doubts. Last summer in Gorny Badakhshan, fierce battles broke out between government forces and detachments of local field commanders, integrated after the end of the civil war into official security forces. During these battles, according to various estimates, from 42 to 200 people died. Moreover, the Tajik security officials failed to defeat the Badakhshans, and they had to conclude an armistice with them. At the same time, on the territory of neighboring Afghanistan, the militants concentrated on 200, ready to intervene in the conflict. In the event of further escalation, he could easily spill over into the territory of Afghanistan and assume a transboundary character.

Whether the Tajik military would cope with it without the help of other states is a big question. Civil War Experience 1992 – 1997 gives a rather negative answer. Even with the active assistance of Russia and Uzbekistan, E. Rakhmon's regime could not crush the opposition and in June 1997 was forced to go to a peace agreement.

In fact, both Tajikistan and Russia are objectively interested in the return of border guards. Many analysts do not exclude this option.

“... If the situation deteriorates at the pace that we see now,” Andrei Grozin, head of the Central Asia and Kazakhstan Institute of the CIS countries, told Golos Rossii, when extremists preparing for terrorist attacks detain almost every month in both Tajikistan and Kyrgyzstan. acts, I think that the appearance of the Russian border guards is not excluded. " This scenario also corresponds to the interests of the members of the CSTO and the Customs Union, since it solves a number of acute problems to ensure the security of their southern borders. Tajikistan is not yet a candidate for joining the union, but the accession of Kyrgyzstan to it, willy-nilly, will raise the issue of integration with Dushanbe. As part of the union, the border will cease to be a matter only of Tajikistan. Otherwise, the allied states will have to defend the Tajik-Kyrgyz, not the Tajik-Afghan border.

Ctrl Enter
Noticed oshЫbku Highlight text and press. Ctrl + Enter
We are
We are ready for threats of any scale. ”Tajikistan in the shadow of China
37 comments
Information
Dear reader, to leave comments on the publication, you must to register.