October 8 2013
4
In November 1914, German units broke through the Russian North-Western Front in the Lodz area. To cover the Warsaw-Skarnevica railway, on the orders of the 6 th Siberian infantry division commander, the 4 th rail battalion hastily equipped the armored train. Time was running out, so for its construction they used two 4-axles and one 2-axle metal gondola cars and a passenger locomotive of the Y series. Inside, the cars were simply covered with boards, and loopholes for rifles and machine guns were cut through the sides. The engine and the tender were covered from the sides with steel sheets to protect against bullets. The commandant of the train was appointed Captain 7 of the Finnish Infantry Regiment Vasilyev.


Despite the primitive design, and weak weapons (machine guns and rifles), this armored train provided great support to our troops. Attached to the 40 Infantry Regiment to enhance the defense of Skarnevitsa, the train entered the battle 10 in November 1914 of the year at Koluszki station.

12-13 November 1914 of the year, already under the command of captain of the 4 railway battalion A. Saveliev, armored train “dispersed the enemy units, restored the message, repeatedly correcting the spoiled track under fire, and took two trains with firearms and food, which they badly needed Our troops in the city of Lodz. "

On November 19, the squad not only repelled the attack of the German infantry, but, having counterattacked, pursued the enemy to the Kolushki station, and November 23, in cooperation with the 6 of the Siberian Infantry Division, captured it. Subsequently, Captain A. Saveliev for his courageous actions in November 1914 of the year, was awarded the Order of St. George 4 degree.

Subsequently, this armored train was included in the garrison of the Russian fortress of Ivango-Rhode, where it was served by a command from a special-purpose marine regiment commanded by Major General Mazurov. This unit operated on the Western Front and had a special organization. July 12, Major General Mazurov, July 1915, reported to Major General A. Schwartz, Commandant of Ivangorod:

“I donate to Your Excellency that, according to your order, today at 6, the equipment of the armored train has been completed. The armament of the train consists of 2 37-mm guns, 8 machine guns and 80 shooters. The train supply consists of: 144 loaded 250 cartridges for machine-gun belts; 5 unloaded ribbons that fit in the car so that they can fit in close places; 72000 spare cartridges for machine guns without clips; 9000 (approximately) cartridges on the hands of the shooters; 19000 spare cartridge holders for shooters; 2 machines for equipping machine gun belts; 200 shells for 37-mm guns. In addition, there are spare parts for cannons and machine guns, there is also an explosive (four 18-pound cartridges and eight 6-pound tolovyh) and a supply of provisions (canned food and crackers) on the 2 of the day. "

A week later, an armored train entered the battle with the advancing Austrian units, as reported to the commander of the 19 regiment on July 1915 of the year midshipman Fleisher: 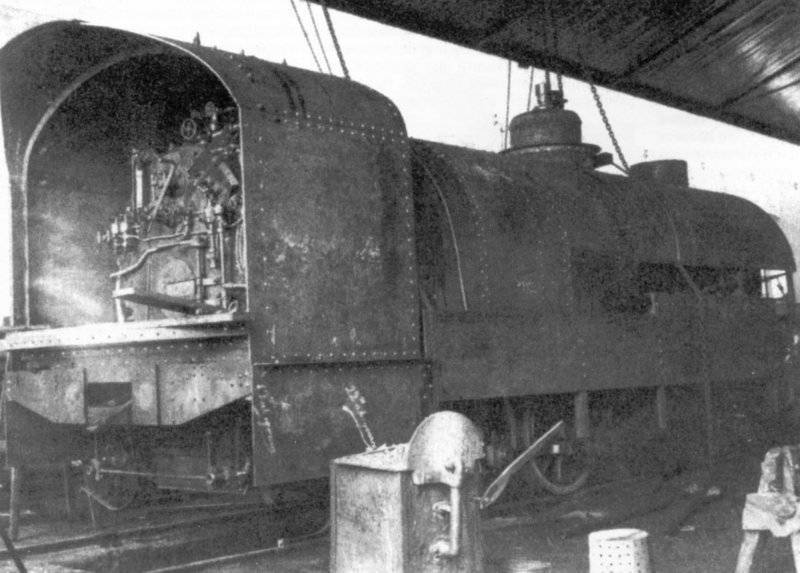 Production of a typical armored steam engine as per the project of the 2 of the Zaamur railway brigade. 1915 year, Kiev main workshops of the South-Western Railways (VIMAIVVS).

“I donate to Your Excellency that I, with Ensign Sheviakov, and with half a company of the company entrusted to me, were in combat with 1 one o'clock until 7 hours 30 minutes in the evening on the train headed by Lieutenant Mukhin. The train was entrusted with the task of helping the withdrawal of our troops from the 2 line of serf positions to the Sekhetsov positions. This withdrawal along the railway line was made under the onslaught of excellent Austrian forces and some of our units (the 1 battalion of the Bashkadekarsky regiment) were in danger of being cut off.

The train six times went on the attack on the advancing enemy, each time turning him into a hasty escape and thus helping out his units. The first time the train went on the attack on the Radom branch in Bankovetsky forest. At the same time he came under a very strong fire of the enemy, who, however, did not cause losses, but only spoiled one rifle. The Austrians, in the strength of several companies, were driven away. The second, third, fourth and fifth time the train went on the attack in the same forest along the Kozienice branch. Here the forces of the Austrians acted at the beginning of the 2-x battalions gradually increasing. Each time the train drove the Austrians over a mile and a half and caused the enemy considerable losses. The Austrians fled straight from the train. The train itself was also subjected to heavy shelling all the time and during one of the attacks several hand bombs were thrown at it, exploding in 15-ti and causing no harm. 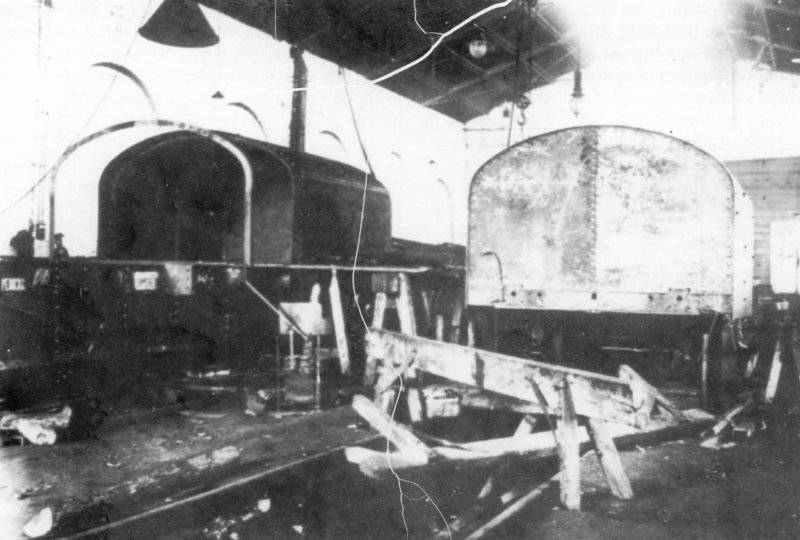 Production of typical armor sites for the project 2-th Zaamurskoy railway brigade. 1915 year, Kiev main workshops of the South-Western Railways. Please note that the door for the landing team in the right armored car is still missing: it was cut out in the already riveted steel sheet (VIMAIVVS). 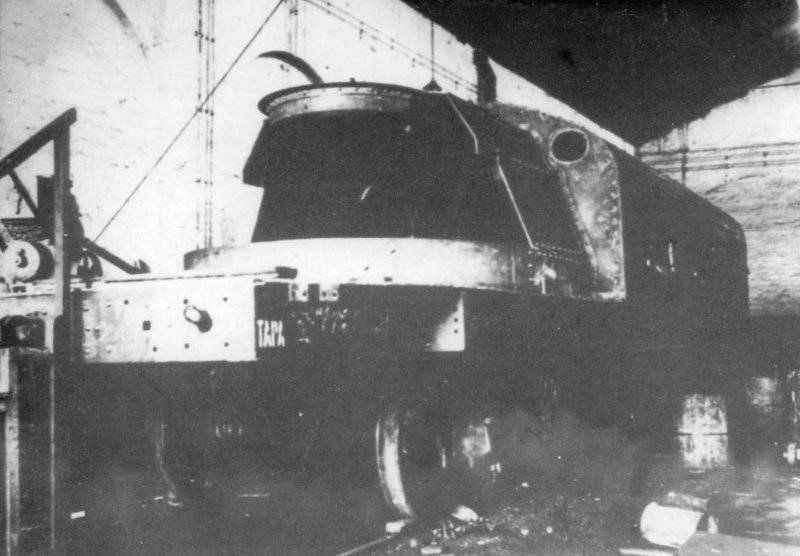 Production of typical armor sites for the project 2-th Zaamurskoy railway brigade. 1915 year, Kiev main workshops of the South-Western Railways. The design of an armored case for a gun mount, as well as an embrasure for firing from a front machine-gun, are clearly visible. Such were the two first armored trains. Subsequently, its design was changed, and the machine gun could fire not only forward, but also sideways (VIMAIVS).

The fire was mostly conducted at a distance of 100-150 steps, but often the train approached the 1012 steps with certain groups of people. During one of the attacks, we successfully fired a column of enemy cavalry with a machine gun that crossed the canvas. Attempts by the enemy artillery to fire the train were unsuccessful due to the location of the train inside the enemy location. Attempts to destroy the path behind the train were repelled by our machine-gun fire. During the attacks on Kozhenitsky branch, we picked up several enemy rifles and one wounded lower rank of the Tambov squad ...

The presence of the train had a wonderful moral effect on our troops. After 1,5 hour break, during which the train, on the orders of the authorities, stood in reserve - in the zone of only weak shrapnel fire - he was again moved to attack the edge of the forest, already occupied by significant forces of the enemy. When the train approached, part of the Austrians escaped, and partly scattered in huts, from where our 37-mm guns were knocked out, scattered and destroyed by machine-gun and rifle fire. After this attack, in view of the onset of darkness, as well as the successful completion of the combat mission assigned to the train, the train was pulled out of the battle line and set behind the Vistula. I understand that people both in my car and in the car of Ensign Sheviakov behaved perfectly. Worked fun, calm and absolutely no fuss. Not a single shot was made in vain. I can’t imagine those who have distinguished themselves, since everyone is at the height of his duty. I must convey, however, that more difficult work fell to the share of the gunners. "

After the battles near Ivangorod, the squad was left for repairs in Brest, where for a short time the 3 gillet was “privatized”. In the battle log of the 4 Company of this battalion there are such records: 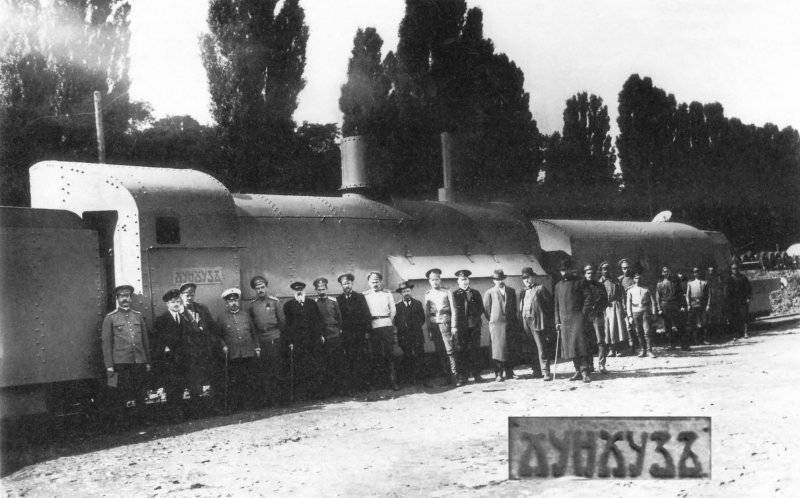 The first typical armored train, manufactured by the project 2 th Zaamurskoy railway brigade. Kiev main workshops of South-Western Railways, 1 September 1915 of the year. A sign with the name is visible on the driver’s booth, its display is on the right (RGVIA). 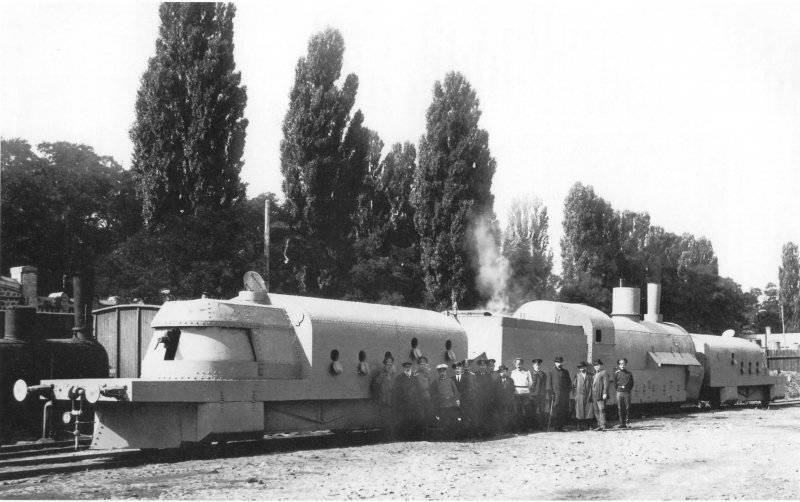 When departing from Brest 16 in August 1915, the train at Kobrin repulsed three German attacks attacking the Pereyaslav Infantry Regiment near the village of Polyanichi and, moving forward, took up enemy positions.

But with the departure of the 3 railway battalion from the Western Front, the armored train again entered the Marine Regiment of special purpose. As part of this part, with white anchors painted on the armor, the train operated until the summer of 1917.

March 10 1916, leaving the combat operation, the train number 4 was ambushed by the Germans, was seriously damaged and lost two cars, shot by a German battery. After that, the train was taken to the repair in the Gomel workshops, where he stood until November 1916. After the restoration, the armored train included two metal 4-axle blinded Fox-Arbel gondola cars and a Ya. Series armored train.

In the spring of 1917, the Western Front command filed a petition for the transfer of an armored train from the sailors of the army. 26 on April 1917, the following report was sent to Bid:

“On the Western Front there is an armored train for the Separate Special Purpose Marine Brigade. Consisting in secondment to the 10 railway battalion, and serving under the leadership of the same battalion, the above train remains in the separate naval brigade.

This situation creates some inconvenience in using the train, as the train consists of officers of the Maritime Brigade, and the train should be replenished and changed with the knowledge and consent of the head of the said brigade, who is not at all subordinate to the head of military communications of the Western Front.

The commander-in-chief of the armies of the Western Front is requesting the inclusion of this armored train in the 10 railroad battalion. ”

In June 1917, the decision to transfer the armored train from the seamen to railroad workers was made, and the brigade commander, General Mazurov, agreed to keep all the weapons on the train - two 37-mm cannons and 8 Maxim machine guns. But despite this, until the autumn of 1917, the 10 railway battalion could not complete the armored train with a normal team - there were no gunners or machine gunners in the battalion. 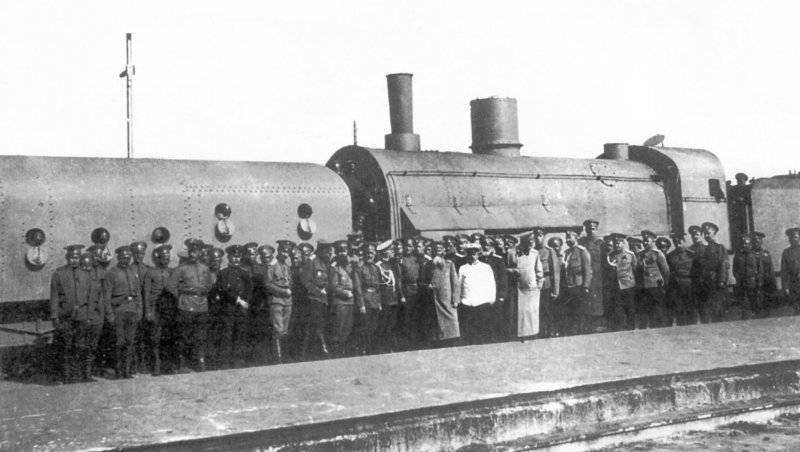 Inspection of the first type armored 2 of the Zaamursk railway brigade "Hunghuz" by officers of the headquarters of the Southwestern Front. Kiev, September 1 1915. In the center stands N. Ivanov, commander-in-chief of the armies of the South-Western Front (with a beard) (RGVIA).

In the fall of 1917, soldiers of the 10th zhelbat sided with the Soviet government. The armored train received the name "Revolutionary armored train", while its weapons were strengthened - instead of guns Hotchkiss in the armored wagons installed one 76,2 mm field gun model of 1902. In addition, the Fox Arbel metal gondola with two 76-mm Lender guns from the 3rd separate railway battery for firing aerial shots was additionally included in the armored train the fleet.

At the beginning of 1918, the armored train received a new name - No. 1 "Minsk Communist Lenin". AT stories This composition said the following:

“Former armored train of the 10 railway battalion. In the Red Army moved in the days of the October Revolution, and entered the disposal of the Central Executive Committee. The first combat clashes with the Germans and the Haidamaks under Mr. Zhlobin in February 1918, in battles with which the sites were defeated, and the armored train went for a new reservation to the Bryansk plant in early March. ”

However, one armored platform and a Fox Arbel gondola with two 76-mm Lender cannons were not broken, but fell into the hands of Polish legionnaires, who included them in the armored train “General Konarzewski *.

An armored steam engine of the series I from the Minsk Communist after repairs included the new armored train No. 6 Putilovtsy. This composition had two armor platforms built at the Sormovsky plant and operating on the Southeast and Southern Fronts, as well as near Petrograd in 1919-1920.

Their service armored train number 6 "Putilovtsy" named Comrade. Lenin graduated in 1922, when he was disbanded in the Ukrainian Military District. By this time, its structure still had an I-series armored train, formerly part of an armored train of the Maritime Special Operations Brigade. 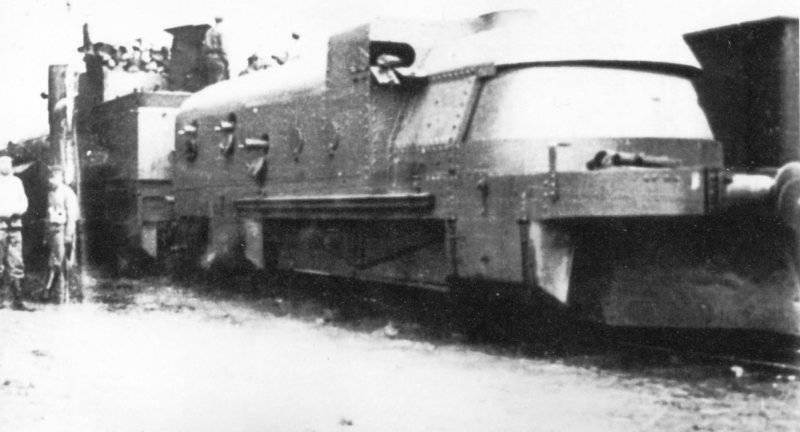 Typical armored train 2-Zaamurskoy railway brigade, served by a team of His Majesty's own railway regiment. 1916 year. Please note that, in contrast to “Hunhuz”, the installation of the front machine gun is changed, and allows you to fire not only forward, but also to the side (photo from the S. Romadin archive).