October 7 2013
1
Already in early August 1914, in the workshops of the city of Tarnopol, the 9 railway battalion operating on the South-Western Front built the first Russian armored train. Initially it consisted of an Austro-Hungarian steam locomotive and three carriages - two machine guns and one gun. His armament consisted of an Austrian cannon 80-mm and 10-8-mm Austrian Schwarzlose X-guns. To observe the battlefield there was a special tower mounted on the roof of one of the machine gun cars. As the armor used ordinary steel (boiler iron in the terminology of the time), as well as layers of boards with sand filling in between.


The commander of the train was appointed Second Lieutenant Belov. As part of the troops 8-th army armored train operated in the direction of Lviv. 22 August 1914 of the year when storming Stanislav armored train unexpected attack captured the bridge, which ensured the rapid capture of the city.

Despite the primitiveness of its design, the armored train of the 9 railway battalion was successfully used during the battle in Galicia. 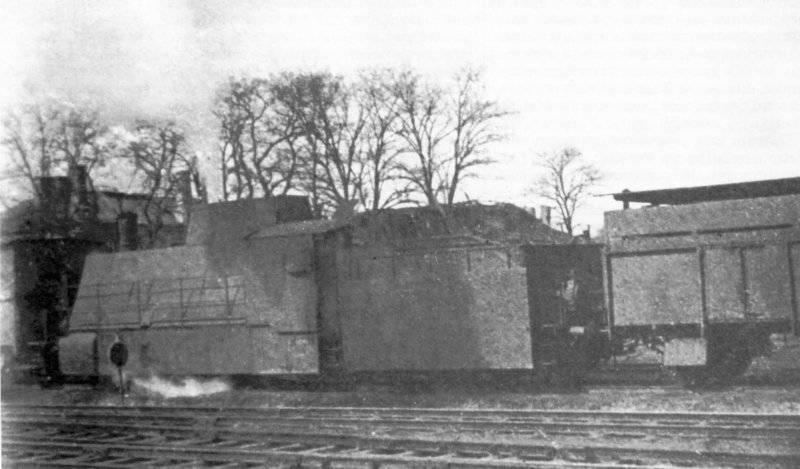 The armored train of the 5 Siberian Railway Battalion in Ust-Dvinsk. 1916 year. The armored steam train and the rear armored 2-axle gondola with loopholes (CVMM) are visible.

Subsequently, the composition was modernized: they added another gun car with an 80-mm Austrian gun, and also increased the protection of gun and machine-gun crews. At the beginning of 1916, the train received a new armor-rover - instead of Austrian, the Russian Ov series was now used. His booking was performed by the 4-I company of the 1-th Zaamur battalion under the command of captain Krzy-voblotsky, who worked in the Odessa workshops of the South-Western railways. According to the design of the armored hull, he repeated the locomotive of the 8 railway battalion, which was very perfect for that time.

The squad was commanded by lieutenant colonel Lvov and staff captain Kondyrin, the latter from the summer of 1915 and until August of 1917. Despite the stabilization of the front, the armored train of the 9 Battalion provided substantial support to its troops. Here are some examples.

29 June 1916 of the year near the village of Khodachkovo, secretly building a new railway line behind the line of our first trenches, the crew of the armored train unexpectedly attacked the capture of the Austrian positions to the Belomorsky Infantry Regiment.

With their fire and bold attacks of 3, 17 — 20 and 22 of September 1916, the squad provided for the Russian infantry to seize the heavily fortified heights of 348 and Lyson Forest during the attack on Brzezany.

In the summer of 1917, the team of the armored train decided to include the train in the “death” part. 23 June 1917, an armored train attached to the 12 Corps, reached the Bystřice bridge in 13.00 and opened gunfire at enemy positions. Within 45 minutes, the squad fired 114 shells without getting injured, “despite the fact that the enemy opened a strong artillery train by train”.

In the battles at the station Gusyatin-Russian 1719 July 1917, the armored train of the 9 gullet, practically without infantry support, prevented the Germans from developing an offensive on the left bank of the river Sbruch. The 18 July 1917 report of the year said:

“The canvas destroyed by the enemy in several places was on the night of 18 [July], despite the great technical difficulty, fixed.

18 [July] in the evening the armored train secretly approached the line of our advanced trenches. According to the order of the Chief, the train quickly moved forward trenches behind the Gusyatin station semaphore, opened intensive artillery and machine-gun fire on the village of Ol- 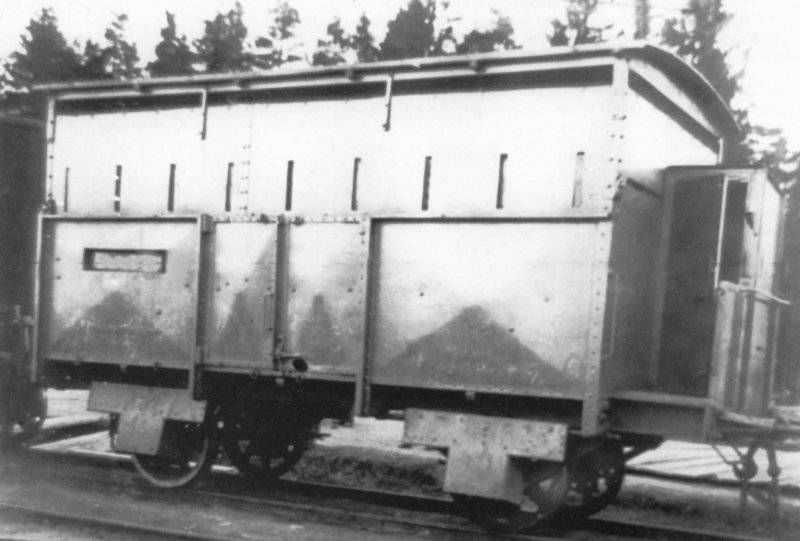 Armored 2-axle gondola with loopholes from the composition of the armored train 5-th Siberian railway battalion. 1916 year. The embrasure for shooting from a machine gun and loopholes for rifles (ASKM) are clearly visible.

a hovchik on the opposite bank of Zbruch and the direction of Gusyatin. The enemy had noticeably strong confusion, he began to release green and red rockets in the direction of the train, and opened heavy artillery and armor-piercing machine-gun fire, armor in several places was damaged.

Having stayed on the line of fire 25 minutes, the train, fearing damage to the path behind, moved away. After 4 hours, the train, on orders from Nachdiv, warned the units ready to attack, whose task was to throw the enemy off at Zbruch, again moving forward in front of the chains ready to attack, opened fire on the targets and locations of the enemy’s missiles. In the course of 20 minutes, the train was ahead of the attackers at the entrance arrow of Art. Gusyatin. Further the path was destroyed.

The success of the train raids can be attributed to the fact that the enemy was so sure of the destruction of the canvas by the previous heavy artillery shelling that he had not watched him completely. The performances of the train had a great charitable moral value for our units and panic for the enemy. At the moment, the train’s performance on this site is no longer possible, for today the enemy in many places destroyed the canvas with heavy artillery, correcting the shooting with two tethered aerostats, and mined a stretch of track where shelling is possible. ” 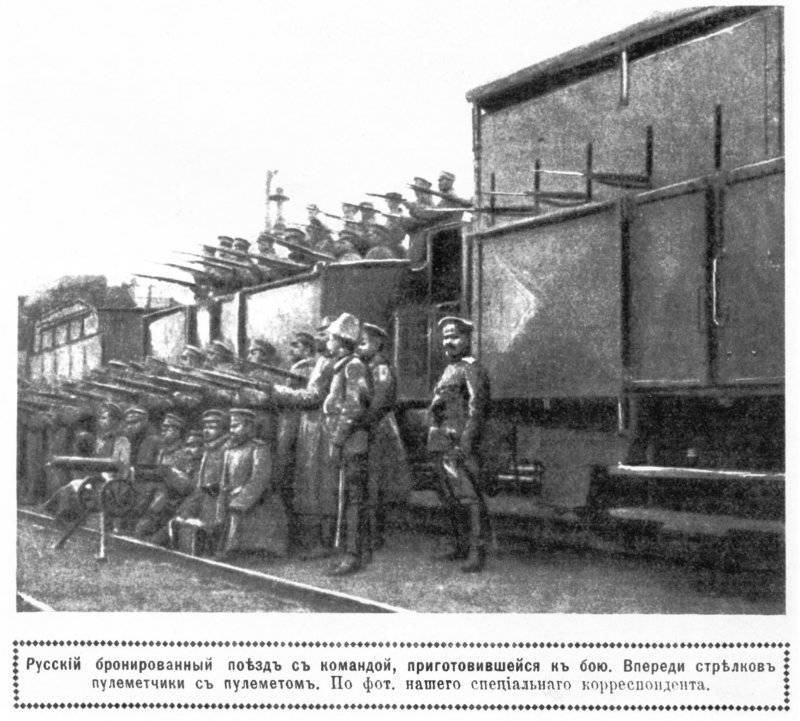 Armored train 5-Siberian railway battalion with the team. Photos from the magazine "Niva" for 1916 year. In the foreground, a machine gun armored car, in the center of the 2-axle artillery car, on which are the arrows (ASKM).

After the battles near Gusin, the armored train of the 9-zhelbat was sent to Kiev to repair damaged armor. But in August, he was at the front.

“In view of the urgent repair of the entire armored train, we left for Larga. We are waiting for further orders. ” 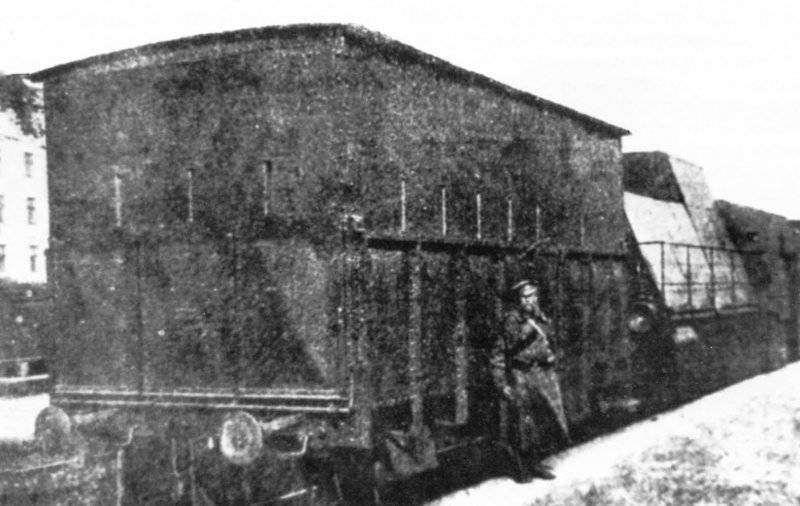 2-axle machine-gun armored car of an armored train of the 5 of the Siberian railway battalion. Ust-Dvinsk, 1916 year (photo from 1916 magazine of the year of publication).

Semi-armored steam locomotive Ov from the armored train of the 5 Siberian railway battalion. Ust-Dvinsk, 1916 year. It can be clearly seen that the boiler of the locomotive is protected only from the sides and partially in front (photo from the 1916 magazine of the year of publication).

The latest document for the 1917 year regarding the armored train of the 9 railroad battalion is dated December 7. The telegram sent to the battalion commander stated:

“It is not possible to send your armored train for repair to Kiev or Odessa because there is no place in the Main workshops of these points.

Therefore, without losing time, I ask you to send an armored train to Mogilyov-Podolsky station and leave it there, putting out a bro-non-train. ”

Documents on this armored train for the first half of the 1918 of the year, as well as for many other armored trains of the Russian army, were not possible for the author to find. But most likely, the team of this composition went over to the side of the Soviet power, and acted against the Germans and the troops of the Central Rada in Ukraine. In the documents, he was referred to as "Armored train No. 9 former jibber".

The order to manage Centrobron (body dealing with armored units and armored trains in the Red Army -Prim. Of the author) No. 19 from October 21 of 1918 of the year, the list of the armored train of the 9 railway battalion registered with the Centrobroni was announced. Among the 80 people there were those who began to serve as early as the First World War, for example, Vladimir Tadulevich (entered the 10 March 1915 armored train) and the platoon commander Stepan Kharmanenko, who served on this November 15 1914 armored train.

Subsequently, having received a new armor-plow of the Bryansk plant, but with an old bro-nepovoz, this composition as an armored train No. 9 (or No. 9 zhelbat) fought on the southern front, where it was lost in September 1919 of the year.

Armored train 5-th Siberian railway battalion captured by the Germans near Riga. August 1917 of the year. The photo clearly shows two 2-axle armored cars - artillery right, with an 76,2-mm anti-assault gun of the 1914 model of the year, on the left a machine-gun, with loopholes for firing from rifles (NM).

Ctrl Enter
Noticed a mistake Highlight text and press. Ctrl + Enter
We are
Our memory. The power and greatness of the locomotiveRussian armored train
1 comment
Information
Dear reader, to leave comments on the publication, you must to register.