Muscle shooting is not an obstacle 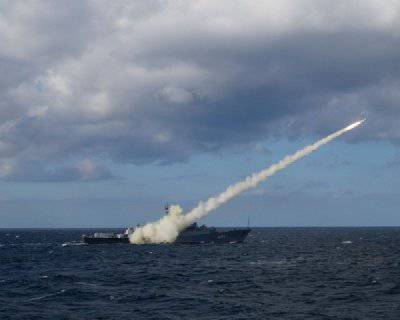 Caspian Shipping Group flotilla, which participated in the interspecies KSHU under the leadership of the deputy commander of the troops of the South-Eastern Military District, Lieutenant General Anatoly Serdyukov, concentrated in the central part of the Caspian Sea. It includes missile ships (RK) “Tatarstan” and “Dagestan”, a small artillery ship (IAC) “Volgodonsk”, landing boats, base and raid minesweepers, vessels of hydrographic service and SPASR, tugboats - in total 16 combat units and more than 20 ships. The coastal communications units, the hydrographic service, the observation area, and the PDSS unit participated in the support of the exercise. In total, about three thousand military personnel were involved in the exercise. For the first time, ships of the CF so closely interacted with army units and aviation.


"Dagestan" as a staff ship

This interspecific KSHU had a pronounced anti-terrorism orientation. According to the conditions of the exercise, a grouping of KF ships, concentrated in the central part of the Caspian Sea, was to launch a missile attack on surface ships and ships captured by the “terrorists”. In addition, the flotilla forces were assigned the task of protecting maritime communications, as well as destroying conditional gangs, which had been blocked and pressed by army units to the shore of the Caspian Sea. To do this, from the sea to the unequipped coast to the rear of the defending "enemy" it was decided to land a naval landing ...

To accomplish the tasks assigned, the Caspian flotilla constellation was to carry out a set of measures to close the area for conducting combat exercises, to implement Tatarstan along with two coastal missile systems Ball of missile launches and artillery firing of Dagestan RK at surface targets. At the same time, the flotilla commanders planned to conduct two test missile firing at surface and coastal targets of the newest MRK “Grad Sviyazhsk” undergoing state tests.

... It is already the third day that RK Dagestan, together with other ships, maneuvered in the central part of the Caspian Sea, then performing the functions of a sentinel ship and practicing air and surface monitoring activities, then conducting naval exercises for its own defense and defense during stops on an unprotected raid. The commander of the Republic of Kazakhstan "Dagestan" captain 2 of the rank Vussal Miriev, who was constantly in the wheelhouse, sought to maximize the time of departure to the sea to improve the skills of watch officers to control the ship in overcoming minefields.

The crew of the ship these days has repeatedly participated in the development of standards for joint use of the missile with RK "Tatarstan" weapons on group of courts of the conditional opponent. Simultaneously with the conduct of marine and special training activities, the personnel under the leadership of the foreman and boatswain continued the shipboard works on painting the upper deck, which were started in the base. Giving “Dagestan” a special naval glitter according to all the rules of marine culture is related to the fact that in the period from 1 to 11 in October this ship was to perform the tasks of combat service in order to demonstrate the Naval Flag of the Russian Federation in the central and southern part of the Caspian Sea. During this trip, the ship’s entry into the Iranian port of Enzeli and the Kazakh port of Aktau was scheduled.

The flotilla command, considering that the crew of Dagestan, who represented the Russian Federation and our Navy in Azerbaijan in August when entering the port of Baku and was preparing for a new combat service, somewhat reduced the training and combat load for this ship. During the interspecific KSHU, he was assigned the role of a staff ship, on which it was planned to deploy the GKP and the headquarters of the force grouping. And all the practical rocket firing was to be performed by the Tatarstan rocket ship. After a group of KF headquarters officers headed by deputy fleet commander captain 1 of rank Nikolai Yakubovsky climbed from the small artillery ship Volgodonsk, which arrived from Astrakhan, on board Dagestan, the ship acquired the status of a staff one.

From the board of the Republic of Kazakhstan “Dagestan” I happened to observe the progress of this large-scale exercise.

As previously reported, the Red Star, the “Grad Sviyazhsk” IRC, which was built on the GCC in Zelenodolsk and is the lead ship of the Buyan-M project, arrived in August with. in the point of basing in Makhachkala for running and state tests. Sea trials "Grad Sviyazhsk" successfully passed. Another important condition for the state acceptance of the ship is to conduct its tests for the main purpose, that is, for the possibility of successful use of its on-board armament - the latest Caliber missile system and artillery systems. Scheduled firing "Caliber" at the sea target and at the target on the coast should have been the most important exam for his crew.

But, unfortunately, on the appointed day and time of test rocket shooting at a surface target did not take place due to difficult meteorological conditions. Just on the night of the September test day, contrary to all predictions, at about an hour of 4, a storm (up to 30 meters per second) of north-west blew and an 6-point storm broke out on the sea. The crews of the ships and vessels participating in the training, withstand long hours of rolling. The cyclone brought a lot of trouble to the naval sailors: a previously set floating target, imitating a surface target, was torn off the anchor by a wave. But the crew of the tug detected a drifting target in time. But once again to anchor it to its former place in the marine range for almost 10 hours, he was not given storm surges. But when the wind began to change direction from north to south and a calm window was formed for several hours, the target still took its place and the flotilla command decided to conduct test rocket shooting.

The spectacle of the rocket attack of a small artillery ship, traveling at a speed of 18 nodes towards the rising sun, was of course fascinating. The IRC Grad Sviyazhsk went ahead, on several cables ahead of Dagestan, on which, like on this small rocket ship, there was a pre-launch preparation, but only for a conditional launch. But "Sviyazhsk" was to make the first launch of a high-precision cruise missile on a surface target in its shipboard biography.

Slow minutes of waiting. Finally, on the upper deck of the MRK, the lid of the shaft of one of the containers of the missile complex was opened. The command “Volley!” Sounded, and from the container hit a pillar of smoke and fire. It was visible, how the rocket soared vertically upwards. Immediately worked her starting engine. The rocket rushed over the horizon to the target.

The officers of the headquarters and the RK "Dagestan" congratulated each other on the first successful test shooting conducted by Grada Sviyazhsk. Yes, this rocket launch has become a real event that will surely go down in the annals stories The Caspian flotilla, to the replenishment of which the newest strike combat unit arrived - the firstborn of the series of MRKs of the Buyan-M project. And soon the crew of the helicopter, which had flown to the point of landing of the rocket, reported on the radio that the target was hit.

Also successfully on the next day, despite the strong rocking and adverse weather conditions, during the next tests, the MRC "Grad Sviyazhsk" already struck a coastal target set on the island of Chechnya with a rocket of a different type. However, it was not possible to fix the moment of the launch of the rocket from the IRAs, since the launch point of this rocket ship was out of sight from the Dagestan RoK.

Looking ahead, I will say that after conducting an interspecific EAR, I went aboard the Grad of Sviyazhsk, which returned to the base with a victory, and met with its commander, 3 rank captain Alexei Gordyev. Speaking about the vicissitudes of test firing, the officer noted that the most difficult was shooting at the shore.

- The strength of the wind reached 18 meters per second, the excitement of the sea - 4-5 points. In such conditions at the time of launch, it was important to avoid a roll of the RTO. To exclude rolling, on the advice of experienced professionals for 5 minutes before the start had to change course. Thanks to the commander of the navigation unit, Senior Lieutenant Vladimir Alexandrov, who was able to make an accurate calculation in the shortest possible time, and the ship went to the starting point for a second. And the rocket launched without deviation from the specified parameters.

Three rockets - in one target

Among the missile combat units of the Republic of Kazakhstan "Tatarstan" (and this year he turned 10) looks like a veteran. On his battle account - dozens of missile volleys successfully completed by the onboard missile system "Uran". So this year, during the time when task “C” was delivered to the sea, “Tatarstan” accurately hit the sea target. And during the interspecific KSHU he once again had to show a master class of missile firing. And the crew of "Tatarstan" did not lose face. At exactly the appointed time, this ship reached the firing line and made a missile launch on a surface target. Simultaneously with “Tatarstan”, two mobile coastal missile complexes “Ball” of a separate coastal missile division, commanded by Lieutenant Colonel Chernousov, launched missile strikes from the firing position on the coast.

Already after 2 hours after launch, when Dagestan came close to the floating target, experts counted on it traces of all three missiles. The target was struck, as they say, in the "bull's eye."


The preliminary results of the combat missions carried out by the flotilla forces during the interspecific command-staff exercise in a conversation with the Red Star were summarized by the deputy commander of the Caspian Flotilla, captain 1 of rank Nikolay Yakubovsky:

- All the assigned tasks related to the execution of rocket firing, despite adverse weather conditions, the ships were successfully completed, all the missiles fired hit targets. With quite good indicators, the Tatarstan rocket ship also performed artillery firing in the main way. If we talk about the preliminary results of performing tasks at sea, I believe that, in general, all ships involved in rocket and artillery firing deserve an assessment not lower than "good."

The crews of combat units of the brigade of surface ships of the captain 1 rank Valery Smirnov: RK Tatarstan (under the command of captain 2 rank Alexei Lugovoy), RK Dagestan (captain 2 rank Vussal Miriev) acted clearly and coherently during the exercise at sea. It is necessary to note the high proficiency of a separate coastal missile battalion (Lieutenant Colonel Maxim Chernousov, whose coastal mobile systems clearly took a firing position in accordance with the standard and delivered a missile attack on the naval target together with RK Tatarstan. Despite the storm conditions, they flawlessly fulfilled the tasks set by the ship The main group and ships of the forces closing the training area in the sea range under the command of Captain 1 of the rank of Cyril Taranenko. Successfully fulfilled the tasks of the force force landing mission The combat training as part of the landing was shown by the marine units of a separate battalion commanded by Lieutenant Colonel Oleg Kovalev.