Internet communication, if carried out correctly, will help get rid of the myths that were created during the Soviet era, but are reproduced by the current one - the complete opposite of it. An example of such a myth is weapon (automata) in the review title - already the concern was named after M.T. Kalashnikov!
As AK-47 has unquestionable quality - unsurpassed reliability. But M.T. Kalashnikov, his son Victor, and four colleagues write about the absence of this - the following montage of 1 and 3 WO 99 / 05467 (A1) sheets.

With the 1 Myth, the clarity is complete - the authors recognized - AK-47 does not have reliability! 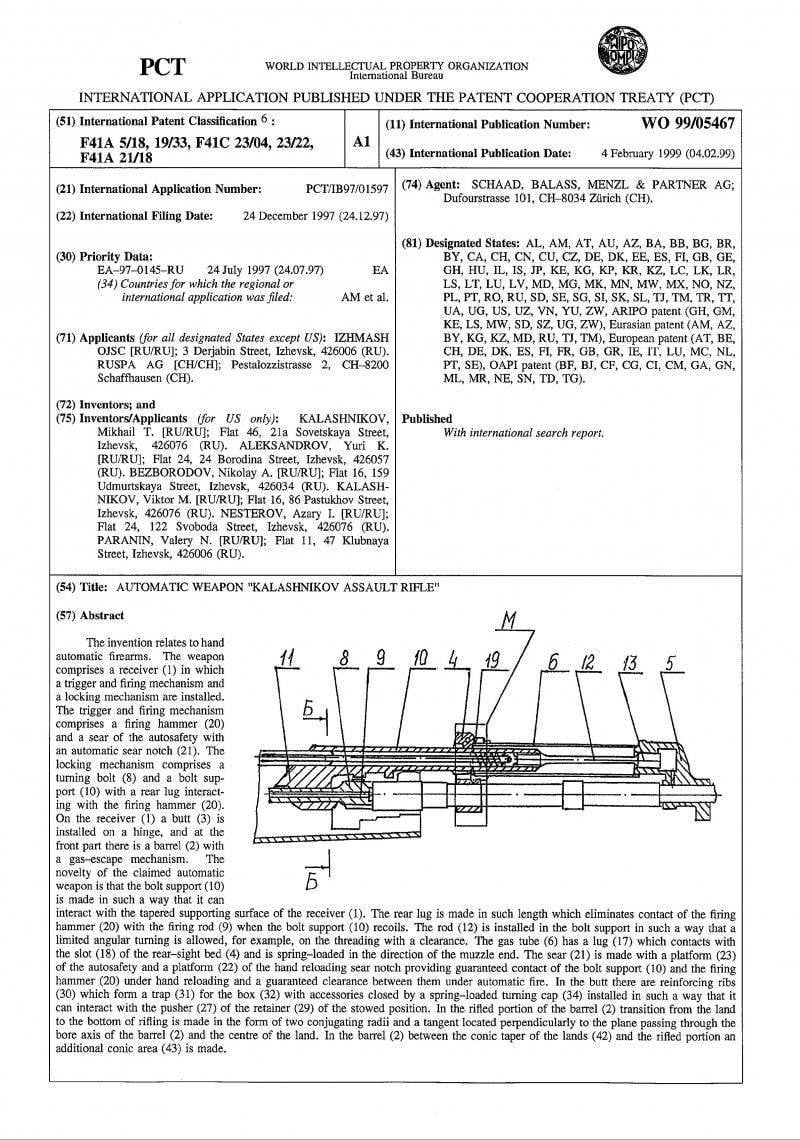 Patent can be found here..

Translation: The disadvantage of this model is the low reliability, failures of the weapon when used in extreme climatic and extreme conditions, low accuracy of shooting, and insufficiently high performance.

Let's try to deal with the authorship. It is documented by patent WO 99 / 05467, that MT. Kalashnikov is a co-author of AK-74. There is no free access, but most likely there is no copyright certificate of the USSR, in which M.T. Kalashnikov is the only author or co-author of AK-47. In 1946, Sergeant Kalashnikov served on the range in the division of V.F. Fierce. In the same year, the sample submitted by Kalashnikov was tested and a conclusion was drawn on it - a quote from ... “the system is imperfect and cannot be refined”. Is it only Sergeant Kalashnikov who created the rejected option, or one of the officers told him which node to “borrow” is unknown - after all, the experience and knowledge of the officers who tested a lot of weapons and the knowledge of the Kalashnikov tank Sergeant were not comparable! We must not forget that the officers were not only Hugo Schmeiser’s Mkb42 / MP43.

V.F. Fierce, he said, made 18 suggestions for changing the original design, as if he forgot the negative conclusion and wrote a letter of recommendation to the Kovrov plant - to assist in finalizing the tested sample.

Taking into account the above, let everyone answer the question: “Could Sergeant Kalashnikov be the author of the idea (concept) of the machine gun or head the technical leadership in the group of officers?” The memoirs of contemporaries about the creation of the AK-47.

At the factory, design engineer A.A. Zaitsev, let's say correctly, by working together with technologists and Kalashnikov, was instructed to create samples for testing - the one brought was declared unusable. In this variant (prototype), approximately 400 changes were made - in addition to the 18 proposals made by V.F. Fierce!

Briefly reviewed the two stages of creating the AK-47. Collectives are changing, but only that MT is consistent There is always a Kalashnikov in the lineup - he seems to be “in action” in the process of the birth of AK-47!

By the way, in Kovrov, the former machine-gun machine, and now the “Vasily Alekseevich Degtyaryov Plant,” was put on its feet by Vladimir Grigorievich Fedorov (1874 - 1966) was the designer of the first “intermediate” caliber cartridge in the Russian Empire 6,5 mm, as well as the world's first automatic rifle for this cartridge!

It was reliably established that the AK-47 prototypes that were on the test of the second stage of the competition were created and manufactured in Kovrov! The past cannot be rectified, as well as the fact that Fate favored only M.T. Kalashnikov - he transports, from the landfill to the plant in Kovrov and back, different types of weapons - he is called the ONLY designer AK-47!

In my opinion, on the basis of the above, it is correct to call this brand of weapon as follows: “the AK-47 machine gun named after MT. Kalashnikov "! For dissenting readers, indicate the irrationality in my conclusion.

There is a patent WO 99 / 05467 as evidence that a weapon under the name AK-74 was created by a team in which MT Kalashnikov - one of the sponsors. But if the other co-authors do not object to their obscurity, and also against the fact that the “face of the company” is MT. Kalashnikov, then why should we not properly show our teeth to each other - when debunking Myths ?! Let's live in peace!

Ctrl Enter
Noticed oshЫbku Highlight text and press. Ctrl + Enter
We are
Commentary on A. Petrov's interview “Fire and Tactics in the Russian Army: Another Look”AK-12 come up with in Israel? Galil Ace review
Military Reviewin Yandex News
Military Reviewin Google News
140 comments
Information
Dear reader, to leave comments on the publication, you must to register.