Belarus has no money for new fighters

23 September 2013
10
In 2014, it is planned to resume work on the modernization of MiG-29 combat aircraft for the Air Force of Belarus. This was recently announced by the deputy chief engineer of the 558 aircraft repair plant (Baranavichy) Alexander Vorobei. He stressed that the Belarusian military "is not able to buy new fighters." 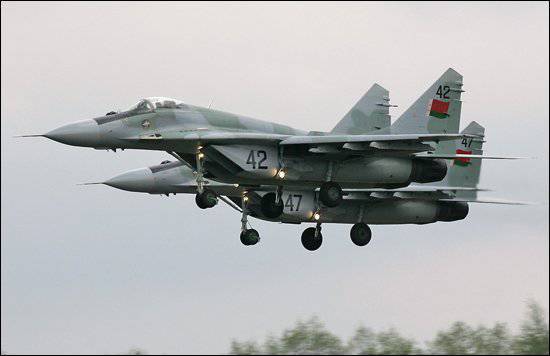 According to the expert, earlier at the enterprise four such fighters, which are in service with the Air Forces of the country, have already been modernized. At the same time, Sparrow noted that, in addition to the Belarusian ones, the MiG-29 fighters of foreign air forces are being modernized at the plant. Modernization of the MiG-29 is made in the process of overhaul, when the plane is undocked into units.

Let me remind you that after its formation in 1992, the Belarusian Air Force inherited from the collapsed Soviet Union almost all aviation equipment based at that moment on the Belarusian territory. This number also included more than 80 MiG-29 fighters of versions 9-12 and 9-13.

However, the leadership of the country considered that there were too many such machines, and it was decided to sell part of them abroad. In the 1996, the 18 of the MiG-29 fighters (including two Sparky MiG-29UB) were delivered to Peru. Another 31 such aircraft during 1999-2002 acquired Algeria. All of them have undergone pre-sale training at the 558 aircraft repair plant.

Part of the remaining MiG-29 fighters in the Belarusian Air Force was decided to undergo a profound modernization. As stated at that time to the Interfax news agency in the information center of the Air Force and Air Defense Forces of Belarus, “because of the financial impossibility of acquiring and operating various types of combat aircraft, Belarusian aviation focuses on creating a multi-purpose aviation fleet”.

To this end, it was decided to take advantage of the experience of the Russian Russian Avionics Design Bureau, obtained in the second half of the 90-s when creating the experimental MiG-29CMT. And although the Russian Air Force abandoned this option of upgrading the MiG-29, the Belarusians took advantage of the developments of the OKB.

The main directions of modernization of the MiG-29 fighter to the level of the MiG-29BM (“Belarusian modernized”) are related to the refinement of the existing and installation of equipment, a significant expansion of the range of weapons and the introduction of in-flight refueling system.

In addition, the range of weapons additionally includes high-precision means of destruction of ground (sea) targets. Among them are the X-29Т (TD), X-29L, X-25ML, X-31P and X-31A missiles, as well as the KAB-500Kr and KAB-500L adjustable bombs. In total, two air-to-surface missiles and two to four adjustable bombs can be placed on the MiG-29BM.

Prior to adaptation to the aircraft of a special opto-electronic sighting container, the use of guided weapons with laser semi-active homing heads (X-29L, X-29ML, CAB-25L) with the MiG-500BM is possible only with external target designation.

To use new types of airborne weapons in the radar sighting system of the upgraded MiG-29BM fighter, a number of new modes of operation are being implemented.

Thus, the upgraded radar sighting and navigation complex RLPK Н019П additionally provides an overview of the earth and water surface with the detection of single and group, point and extended ground and surface radio contrast targets, the issuance of coordinates of detected targets for the formation of target designation and the use of new types of guided weapons. Among them - air-to-air missiles RVV-AE and anti-ship missiles X-31А.

The information and control field of the cockpit is also being upgraded. The outdated monochrome television indicator is being replaced by multifunctional color liquid crystal, to which navigation, survey, aiming and parametric information as well as the image of the terrain and targets obtained by television homing missiles X-29Т (TD) and corrected bombs KAB-500Kr are displayed in graphic form.

Finally, another significant difference between the upgraded MiG-29BM and the serial MiG-29 is the introduction of an in-flight refueling system. As a result of one refueling in the air, the flight range increases by 80%, its duration significantly increases.

In general, in the process of converting the original MiG-29 under the MiG-29BM program, 23% new units are introduced into the onboard avionics equipment (avionics), and another 6% is undergoing modifications. According to the authors of the modernization program, as a result of improvements in the complex of equipment and the expansion of the range of weapons, the combat potential of the MiG-29BM aircraft as compared with the Air-to-Air class by 29% and the Air-to-Surface class increases in comparison with the serial MiG-80. Xnumx times.

Tests of the first MiG-29BM were successfully completed by July 2003. In an aerial parade in honor of the 60 anniversary of the liberation of Belarus from the Nazi invaders 3 in July 2004, a link of four MiG-29BMs, which Alexander Lukashenko called "super modern aircraft", was demonstrated.

And in these words there was no big exaggeration: 4 and 10 March 2005, military pilots of the Republic of Belarus set a whole series of world aviation speed and climb rates on two MiG-29BM airplanes. However, after all these successes, work on the modernization of the rest of the Belarusian MiG-29 was suspended for a long time for unknown reasons.

However, this does not mean that work on improving the MiG-29 stopped altogether. From the statements of Sparrow it can be concluded that the modernization of MiG-29 fighters for foreign air forces continues.

Belarusian aviators can only hope that the modernization of the Russian MiG-29 will resume.

Ctrl Enter
Noticed oshЫbku Highlight text and press. Ctrl + Enter
We are
What you didn't want to know about EnglandList of destroyed the largest and most high-tech enterprises
Military Reviewin Yandex News
Military Reviewin Google News
10 comments
Information
Dear reader, to leave comments on the publication, you must to register.