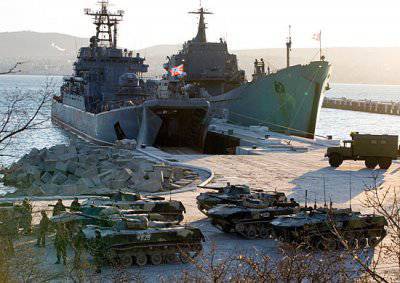 
KChF of Russia in Sevastopol - like a bad tooth in the mouth of Ukraine. But he begins to whine only when friction appears in relations between the two countries. Then the Ukrainian politicians are seized with the desire to urgently go to the "dentist" and remove the "tooth" (I mean the fleet). Or at least talk about it a little louder, scaring your man in the street with the mythical danger that Russian warships supposedly represent for him in the far southern outskirts.

Their movements are forced to recall the already forgotten parody of the poems of the classic of Ukrainian Soviet literature Pavel Tychyna: “There is a woman in the garden, and a fleet in the air! Let the Soviet government live. Here! ”Now, a woman from the garden, peacefully harvesting potatoes, is trying to convince through the TV that a big trouble can come to her from the KCF. Let her shake, nothing to sleep.

About "flotophobia" was discussed in the Sunday story of the channel "TSN" (belongs to the entrepreneur Kolomoisky) "Ukrainian-Syrian war." The transfer was devoted to the scandal around some supplies weapons to Syria, reports "New Region".

“More questions about deliveries of weapons to the Syrians arise to the Black Sea Fleet, because its territories are closed to us. What is being taken from there - one can only guess. This fleet is alien to us - a gigantic military base, whose ships can carry nuclear weapons on board; marine aviationcapable of destroying at sea and on land; tens of thousands of military personnel trained to sink a ship and capture coastal bridgeheads. And all this - on 18 hectares of land, where Ukrainians are forbidden to step. Like a stranger fleet you can find yourself in a foreign war - we felt again, now in Syria. And although the Black Sea Fleet base remains a scandalous tourist attraction for us, it remains to pray that there will not be a blow to the Syrian conflict, ”said Kiev television.

Um, and when it was possible for strangers to walk around a foreign military base? Loaned - maintain the terms of the contract. TV men, of course, will not be allowed there. But the official authorities, I suppose, still have access - within certain limits. “Who needs it, he knows,” as President Putin once remarked (on a different, true, occasion).

But this moment is being blown up in the program, from which it is concluded that Ukraine, unwittingly, can be named as a third party in the Syrian war: “The situation was similar in 2008, when the Russians actually fired at Georgia and sank its ships. .. Then we were saved by the warm relations of Tbilisi and Kiev. Now from Sevastopol to the zone of the Syrian conflict, ships of the Black Sea Fleet run smoothly, coming from our territory ... "

So Ukraine was afraid of Georgia in 2008 year? Now who? Retribution Syrian rebels? If so, then it opens up a new facet of international relations, prompting all countries on whose territory American military bases are located to fear a retaliatory strike from the regimes that Unkle Sam shamelessly bombs, “setting the right path”. True, this did not happen until recently, but fear has large eyes.

And then it came to sore. Russians pay "a symbolic amount of 97 million dollars", delivering a "discount" for this on the most expensive gas in Europe.

Alexander Khramchikhin, deputy director of the Institute for Political and Military Analysis in Russia, added fuel to the fire. “In the current geopolitical conditions of the Russian Federation, the base in Sevastopol is absolutely not needed. She is completely satisfied with Novorossiysk, ”he commented on the situation. “Against this background, two new scandals, initiated by the Kremlin, look very significant: they believe that we have unreasonably taken a tax on fuel for the fleet since 1994, and should return it. And abandoned the "thread" - remind the authors of the report. "Thread" is such a training complex in the Crimea, imitating the deck of an aircraft carrier. It was used for training sea pilots, and Ukraine, by its mood, let the Russian military on it, or not, as Krymskaya Pravda wrote.

Khramchikhin clarified the situation with the simulator: “Russia is tired of paying money to Ukraine, which is constantly trying to manipulate it. Russia has built a similar complex at home, and the question is closed on this. ”

In fact, judging by the photographs, the costs to create a new one are not such there, and dancing all the time on one leg in front of the southern neighbor to put it on "The Thread" is not a great pleasure. Let now there Ukrainian pilots are trained when they have aircraft carriers.

The Russians continue to create lawlessness in Sevastopol, Ukrainian TV reporters throw their hands: “Especially the cruisers Moscow and Saratov, based in Sevastopol, regularly cruise with weapons to Syria, and often disappear from GPS satellites along the way.”

“Tension is clearly growing, especially after the statement by the advisor to Mr. Putin Glazyev that after signing the Association Agreement with the EU, Ukraine may lose its status of a strategic partner. Alien fleet in our waters after these words looks very different. Ukraine is faced with the question: is it not worth revising the agreement with our strategic partner so far? The distant Syrian war showed that the Black Sea Fleet is a benefit to the Kremlin and problems to Kiev, ”TV journalists emphasize.

Probably, Ukraine would be satisfied with a military base, which gave an obligation not to intervene in any military conflicts and never shoot anyone. And that while paying well. Peace, in general, military base. But why is this needed? And there are no analogues in the world. Weapons in order and placed in distant territories, to rely on him in politics.

The matter has not yet reached the revision of the contract and is unlikely to come, but the Ukrainian authorities have other opportunities to make the sailors more difficult. For example, border guards may delay the ship’s entry into the sea, which happened at the end of last week with the sweeping guard, heading for the Mediterranean, RIA reported News with reference to the source in the division of the surface ships of the Black Sea Fleet. “They (the customs officers) began to re-form the lists of the entire crew, looked through all the documents, asked questions. It seems as if the process was artificially delayed, ”the source said, quoted by the REX news agency.

According to him, “Sharp-witted” was supposed to leave Sevastopol at 9 in the morning local time (around 10: 00 Moscow time), but at noon (13: 00 Moscow time) the ship “had not even started the main engine and had not started preparations for the exit in the sea". The source stressed that "such inhibitions" in his practice has not yet been.

Later in Mindokhodov Ukraine explained why the incident occurred. A large anti-submarine ship of the Black Sea Fleet of Russia, “Sharp”, was detained by border guards due to errors in the documents that were made by the Russian side responsible for the paperwork regarding crew members, the Information and Communication Department of the Main Department of the Ministry of Revenue and Tourism in the city of Sevastopol reported.

The frontier guards discovered a significant number of mistakes in the crew’s list - incorrect spelling of the surnames, names and patronymic of crew members, series and numbers of passports and officers' identity cards. Until the elimination of errors, the ship continued to remain in the Sevastopol Bay. There were no claims to the design of other documents from representatives of the Ukrainian outfit, reports Forum.ua with reference to "UNIAN".

An interesting situation. So it is in the case of hostilities, when it will be necessary to urgently leave the base, can the Ukrainian border guards start such checks of the KCF ships and detain them?

Ctrl Enter
Noticed oshЫbku Highlight text and press. Ctrl + Enter
We are
Food security of the Russian Federation. Successes and failures. Part of 1. Battle of the harvestWhat you didn't want to know about England
Military Reviewin Yandex News
Military Reviewin Google News
235 comments
Information
Dear reader, to leave comments on the publication, you must sign in.
<script src="https://topwar.ru/engine/classes/js/lazyload.js,qv=26.page