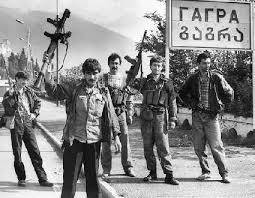 
On a hot August evening, 1992, I lingered in the service, in my office, preparing some urgent "paper". It’s not me that the initiative in the army is punishable, but to remain in the evenings, unless absolutely necessary, is “counterproductive.”

So it happened. A control officer looked into the office: “Oh! Sergey, I'm looking for you! Come to Colonel Ispakov urgently! ”Surprised why I might need the acting chief of staff of our Special Control Service of the Russian Defense Ministry (today we can openly call this structural unit of our Main Headquarters, because by that time, perhaps, the Africans had not visited objects in the delegation of the “newly minted allies”) I proceeded to his office.

For some reason, Nikolay Ivanovich was glad, warmly welcomed and invited me to sit down.

- Sergey, do you know that a war has begun in Abkhazia between Georgians and Abkhazians ?! - he asked. I knew that, of course.

Now, many years later, when more than a dozen of such wars have passed on the territory of the USSR, mention of them does not cause any special emotions. Then - it was something unimaginable: WAR !!! Former Soviet people, recent citizens of a united country, are killing each other!

True, our "independent" and most democratic television talked about this very little and somehow vaguely. To understand who is right there, and who was to blame was simply impossible.

“Right on the front line, our 24 lab in Esher was,” the chief of staff's acting officer continued.

(About this laboratory, then, quite a lot was written in the media and even showed on TV its battered structures with shells. Journalists called it the “seismic laboratories” of MO. We will keep this name in this story.)

I knew that too. We regularly communicated by phone with the deputy commander of this unit, Igor Naturschikov. Even on the ZAS apparatus, sporadic machine-gun bursts and shell explosions sounded there.

- Pasha Grachev made a decision to evacuate the laboratory, equipment, weapons, families of officers and ensigns, their property and the entire personnel of our unit. We create a task force for the evacuation of the part. I want to include you in its composition. Fly there ?!

- If I have to, I will fly, of course! - I replied. My thoughts did not have to look for any reasons for refusal.

(Already after my return, I learned that some of our officers categorically refused then, in Ispakov’s office, a mission “to the war.” “I'll take off the shoulder straps, but I won't go!” They said, “refusers”.)

At that moment I, of course, did not know this, and I was surprised by the unexpectedly joyful reaction of Ispakov: “Well, well done !!! Depart tomorrow at 8.00 from Chkalovsky, the board has already been ordered. ” In the course of further conversation, it turned out that in order to catch the plane, I would send a car to Lyubertsy (where I was renting a room with my family) to 5.00. (Such courtesy happened for the first and last time in all the years of service in this part).

The operations team was a small, 3 officer. It was planned that we would reach the Bombora airfield (located near the Abkhaz town of Gudauta) with a military “board”, and from there we would get to the part by car. How to carry out the evacuation Ispakov represented vaguely. “If you arrive, you will figure it out on the spot. Maybe we will take out the helicopters, maybe by cars, or in general this mess there will end and they will give a “retirement” of evacuation, ”he described his“ vision ”of the situation.

I was a little embarrassed by the mention of helicopters, but on the other hand, since the decision to evacuate was made by the all-powerful then “the best defense minister” - what the hell is not joking, maybe they will send the helicopters for evacuation!

Iskhakov assured that the whole trip will last for a day on 3-4, a maximum of a week.

The fact how little we understood the real situation in that Abkhazia is indicated by the fact that the uniform of the war we determined was not “field”, but “everyday”.

At home, I wrote a letter to my wife (who, together with her daughter, rested with her mother in the Novgorod region) and collected my unintelligent business travelers.

The next morning we were at the Chkalovsky airfield. We were included in the flight list of AN-72, flying with the commission of the General Staff in Tbilisi. Then the headquarters of the Transcaucasian Military District was stationed there. It was decided to land us on the way, in Gudauta. It was the only airport in Abkhazia that was controlled by Russian troops there.

Flew normally. True, before landing, the crew commander came into the aircraft: “Comrades, generals and officers! In view of the fact that we will land in a combat zone, where it is possible to use air defense weapons on an airplane, I will conduct an anti-aircraft maneuver. I ask everyone to sit down and fasten their seat belts! ”

The maneuver was so energetic that for a while it seemed to me that we were just falling directly into the Black Sea, which was rapidly approaching us. However, right next to the water, the engines roared, the plane leveled off, and we boarded the runway of the Bombohy airfield.

Only three of us came out, our operations team. The rest of our fellow travelers took off and continued their flight to Tbilisi.

We were met by an unfamiliar man in “Afghan” without distinctions:
- “Mikhail Mikhailovich Mikhailov. Military intelligence. I was asked to meet and escort you to your unit. I supervise her at the time of the fighting. Welcome to the war! His surname and name - patronymic he was clearly fictional, but the lack of insignia - was surprised. It was an unusual phenomenon.

“You would also need to change everyday to field form. You are too visible on the war in such a bright form. Attract the attention of a sniper. And they are full here. Shoot the Moscow colonels for them - the highest chic! Well, okay, I'll take you to the part - they'll change you there, ”he continued the introductory instruction. "Come, I will introduce you to the senior group."

Then the senior was General Sibudkin. The small paratrooper, not too friendly talked with us: “Your unit commander was confused, got nervous. Just think, shelling the territory. I sent a reinforced company of paratroopers to help him. Keep in touch with me. If Georgians shell you too hard - report, I’ll raise Aviationscare them. ”

At the same time, a short conversation with him ended, and we went to the part where we arrived safely, overcoming pieces of 15 of various checkpoints. On them sat gangster-looking abreks, armed with who in that much. From machine guns and grenade launchers, to hunting rifles and daggers. Some of the "militia" - drank along the way, right in front of us.

Michal Mikhalych, although he knew all the older checkpoints by name, hid his pistol away from sin. “Wild people!” He said, chuckling. “Bind: give, let’s exchange - don’t get rid of it. Before the conflict can reach. They do not understand what a service weapon is. ”
It was clear that the war here was special - with Caucasian specifics.

Meanwhile, the scout gradually brought us up to speed. The acute phase of the war lasted already 5 days. According to him, it began with the entry of Shevardnadze's troops into Abkhazia and the ensuing massacre. First of all, both sides crushed all the commercial stalls of representatives of “hostile” nations. However, the Abkhaz were smashed and killed mostly Georgians, and the Georgians, on the occupied territory, were not all Georgians. Exceptions were, of course, but the general rule was valid. Before the war, Michal Mikhalych himself had a three-room apartment in Sukhumi.

“The entire apartment was ransacked and burned by the Georgians when Sukhumi was captured,” he said gloomily. “Nothing left, a goal like a falcon. Well, at least I managed to send my wife and children in the spring to her mother. ”

By the time of our arrival, the Georgians had captured a significant part of Abkhazia: from its border to the Gumista River (on the right bank of which our seismic laboratory was stationed). She was right on the front line. In the windows of the apartments of the houses of the officers and ensigns the crazy machine guns easily flew. In such conditions there lived wives and children. We slept on the floor, trying to "not loom" in the windows. The atmosphere among family members was nervous, of course.

Another Georgian enclave was north of Gudauta. At the beginning of the war, sudden, for the Abkhaz, a landing from the sea, with the support of local residents - Georgians, captured Gagra and the area adjacent to it. The Abkhaz, in whose territory our part was located, controlled the entire 2 piece of their republic: from the Gumista River to Gagra (including its temporary capital Gudauta) and the stretch north of Gagra to the Psou River, the border with Russia. On the contact line of the warring troops were fighting. As a rule, during the day time there were sluggish exchanges of gunfire, at night, clashes assumed, at times, a fierce character.

There was no overland route from part to Russia. It was not clear how to take out people and, especially, to evacuate their property.

Ctrl Enter
Noticed oshЫbku Highlight text and press. Ctrl + Enter
We are
My grandfather's front-line letters (part 2)Plague in Paradise: Georgian-Abkhaz War 1992-1993
7 comments
Information
Dear reader, to leave comments on the publication, you must to register.