The war in Syria and the dollar 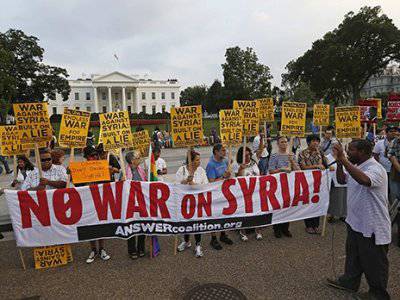 Moscow’s diplomatic initiative regarding the transfer of the Syrian chemical weapons affected the suspension of plans for US aggression against Syria in a very positive way. At the same time, it is impossible not to realize that this diplomatic success provided peace for the Middle East and the whole world only for a time, because Washington did not abandon its plans for Syria.

At the moment, on one side of the scale lies public opinion, which is strongly opposed to US aggression. This can be attributed to: a) the position of the US population, more than 70% of which, according to recent sociological studies, does not approve of Barack Obama's calls for military action; b) world public opinion, which sees in the initiatives of Russia the prospect of overcoming the dangerous political deadlock and which is stunned by the American "games with matches" in the region, called the "powder keg" of the planet. We will not discount the official statement in support of the Russian initiatives of the UN Secretary-General Ban Ki-moon.

On the other side of the scale is the unabated desire of the US administration to start a war. However, in this way, America is waiting for obvious obstacles and "pitfalls". The recent chemical attack near Damascus was committed, as is now well known, not by the Syrian government army, but by its adversary. In other cases, chemical weapons were used by bandit groups at war in Syria (this is also indicated by the 100 report submitted by Russia to the UN on the Khan al-Assal chemical attack in northern Syria on March 19, and the May statement by the head of the UN commission to investigate the use of chemical weapons in Khan al Assal Syria's Carla Del Ponte on the use of chemical weapons by the rebels on the basis of sarin). That is, there is reason to fear that provocations may recur. The meaning of these provocations was and remains that they give the United States, France and other countries of the anti-Syrian coalition, which themselves possess huge stocks of chemical weapons, the opportunity to continue demanding unilateral disarmament from Damascus under the threat of inevitable attack and under the pretext of “fighting terrorism”.

However, in addition to chemical weapons, Syria has a number of other possibilities for deterring aggression.

One of these opportunities is the readiness of the special forces of Syria for operations in the United States, the result of which may exceed all expectations. According to the representative of the Ministry of Defense of Syria, in the United States are now both legally and illegally a few hundred employees of the Syrian special forces "Al-Waadat al-Qass." Combat groups of 3-7 people are equipped with everything necessary and have the task of conducting sabotage operations in the event of a strike by the United States on Syria. Among the targets intended for destruction are command and infrastructure facilities in densely populated states: railways, power plants and substations, hydraulic structures, oil and gas terminals, military facilities, including aviation and naval bases. According to the source, the decision was made by the Syrian leadership, based on the experience of the wars in Yugoslavia, Iraq, Libya, where a purely defensive approach to repelling aggression doomed the attacked party to defeat in advance.

At the same time, the Syrian special forces, which have extensive experience in fighting in Israel, Lebanon and Syria itself, do not have to fight in the United States in order to cause significant damage to them. With the support of Iranian special forces, the effectiveness of sabotage operations can increase by several times - in scale, quantity, and potential military and economic damage for the American aggressor, whose economic interests are represented in Israel, Turkey, Saudi Arabia, etc.

Saudi Arabia, which is another active instigator of the war, rightly fears the Shiite population’s revolt that has been ripening for a number of years, which is up to 15% of the kingdom’s population and is very pro-Iranian (plus the support of co-religionists in Iraq and Bahrain and having large communities in Lebanon). The main part of Saudi Shiites is concentrated in the eastern province of Al-Hasa, which is of particular strategic importance to Riyadh because of its location on the coast of the Persian Gulf and is the main reservoir of Saudi oil.

Egypt also acts as a factor in deterring aggression against Syria, where the conflict of the new authorities with the Islamists supported by Ankara continues to glow. The US aggression against Syria could at any moment blow up Egypt with a civil war, which would make the Suez Canal unsuitable for the passage of oil tankers. This in turn actualizes the problem of alternative oil delivery routes, given that the route around the Horn of Africa adds a couple of weeks to the delivery time, and the Russian Northern Sea Route, although it is the shortest waterway that can connect the main economic poles of the planet (Western Europe, North America and Southeast Asia), has not yet been prepared to solve a similar problem.

The economic problems that will arise in the event of a military strike against Syria are associated not only with the inevitable multiple increase in fuel prices, but also with the approach of the end of the dollar as the world reserve currency: in the first half of 2013, not only Iran and Australia refused to use the dollar in foreign trade calculations, but also five of the ten leading economies of the world, including China, Japan, India and Russia.

Moscow and Beijing, which occupy the number one position in the world, respectively, in the export and import of oil, are able to announce their decision to completely abandon the oil trade for dollars at any time. This is where the greatest danger lurks for the United States. Therefore, the desire to unleash a war against Syria looks like an attempt to delay the collapse of the dollar. It was not for nothing that the autumn aggravation of the situation around Syria coincided with the postponement of the debate on the threat of default by the United States from February to autumn of this year. They are not concerned with democracy in Syria in Washington, but with the issue of the sovereign debt ceiling, vital from the point of view of turning the United States itself into a “failed state” ...

Ctrl Enter
Noticed oshЫbku Highlight text and press. Ctrl + Enter
We are
Interview by President Bashar Al-Assad to the Sunday TimesWho will be the next victim of destabilization in the Middle East?
Military Reviewin Yandex News
Military Reviewin Google News
61 comment
Information
Dear reader, to leave comments on the publication, you must to register.