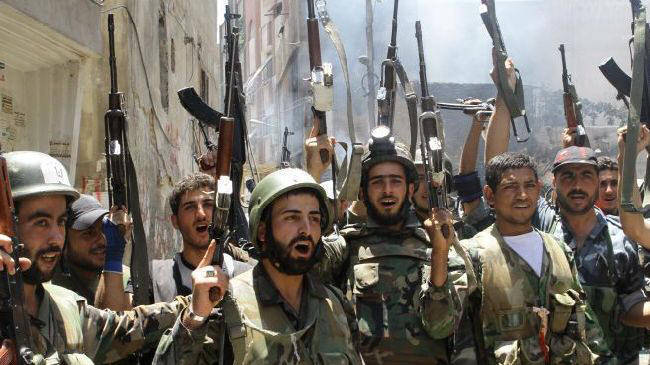 I am an avid optimist, and I usually answer negatively to the question “Will there be a war?” But these days I will not vouch. Long time so did not smell of gunpowder.


This is felt in Washington, in Tel Aviv, in Damascus and in Moscow. Russian and US warships are facing each other, rockets are falling in Beirut, Damascus is on fire, and there is alarm in Tel Aviv. Fighting for al Quseir near the Syrian-Lebanese border could escalate into a regional war; the threat of its transition to the world is increasing.

So it was in past wars. Before the First World War, the dispute was about the Balkans, in the thirties, the conflict flared up around Poland. This time - the Middle East. America and Israel, along with the monarchies of the Gulf want to conquer Syria. This is the last center of resistance in the Mediterranean. If Syria collapses, Gulf oil and gas will flow through its territory, and revenues - into American banks. Israel will be able, without fear, to bomb Iran.

The dispute that flared up in the Russian press about the Second World War, at the subconscious level, was about a future war - whether to fight, or better to surrender, maybe the winners will settle our lives. Svanidze and Gozman branded Stalin, but they meant Putin. They praised the SS, but meant the American marines. Maxim Kantor wrote in his novel: Bolotnaya was an attempt of a coup, like the conspiracies of the Trotskyists of 1930. In 30, this did not pass, and again in 2012. Then the failure of the conspiracy was followed by war. Now история could happen again if the Russians fail to defend Syria.

The story is alien to fatalism. Dynamic plans for the conquest of Russia can be thwarted without a full-scale war - but not without victory. Thus, in the thirties, the victories of Marshal Zhukov at Khalkhin Gol and at Lake Hassan thwarted the plans of the Japanese to seize Siberia and the Far East and divide Russia with the Germans. So the Russian victory over Georgia in 2008 for a long time postponed plans for the West to dismantle Russia. But for the failures you have to pay - so, the unsuccessful 1940 Winter campaign of the year and the unsuccessful defense of Spain inspired Hitler.

Syria is Spain today. Russia's position is fair. Russia defended the independence of Syria - the supply of military equipment, diplomatic support, squadron. But the main thing was the will of the Syrians. Without their will, the Assad regime would collapse, and the Russian squadron would pick up the refugees. Despite the multi-billion dollar cash infusion of Qatar, despite the 50 of thousands of mercenaries - Syria is holding on. And Russian support is not weakening - although masters of disinformation have been swearing for two years now that “Putin will surrender Syria” - just as in 2008, they swore that “Russia will surrender South Ossetia”.

Here is one example. During his trip to Israel, Putin promised the Israeli prime minister to freeze the supply of Syrian air defense missiles, provided Israeli non-intervention in the Syrian conflict. The Israelis could not resist - they supported the rebels and thrashed Damascus three times in a row. The Russian leadership responded to this by defrosting supplies. Netanyahu flew to Sochi and tried to persuade Putin to keep quiet. But Putin unequivocally condemned Israeli intervention in Syria, and Russian missiles went to Syria. The Israelis launched a "duck", allegedly Russia refused to supply air defense. But this is part of the psychological war in which they have become adept. Russia will not surrender Syria, and will insist on the right of the people of Syria to decide their own fate - if only because the concession on Syria can lead the war to the gates of Moscow. If you are told that Russia will surrender Syria - you know, before you is an unscrupulous columnist.

Meanwhile, in Washington, supporters of the intervention called for an air blockade of Syria; Admiral James Stavridis said that Patriot rockets installed in Turkey would not only protect the skies over Turkey, but also bring down Syrian planes if they rise from their airfields. Plans for the destruction of all Syrian aviation were voiced in Washington. The strike should be struck by US aircraft carriers - but they are afraid to approach the Syrian coast, since there is a Russian squadron. A strike on the squadron is very likely.

Now Hezbollah has joined the war - a fighting religious order, a Lebanese ally of Assad, who managed to defeat the Israeli army in 2006 year. The war is not between Sunnis and Shiites, in their opinion, but between Israeli-American mercenaries, including Salafi and al-Qaeda, on the one hand, and the Resistance forces, on the other.

Hezbollah lost many fighters in the Battle of Quseir, and in addition to a residential area in Beirut, where sympathizers Shiites live, a missile volley was struck. It is possible that the Israelis are behind the strike on Beirut; they plan to strike at Russian air defense installations at the earliest opportunity.

In this extremely dangerous situation, retreat is even more dangerous than an offensive. The concession of the Russian positions will be regarded as weak, and will not be able to prevent, but accelerate the war.

All sides in the civil war converged on one thing: the fate of Syria is decided in El Quseir. This small town thirty kilometers from Homs, not far from the Lebanese border, was in the hands of the rebels for more than a year, and an endless stream passed through it from Lebanon weapons and foreign fighters into the country. For Quseir were long and hard fighting. Among other forces, Quseir was held by the Farouk brigade; this is her commander Khalid al-Hamad, nicknamed Abu Sakkar, cut out and ate the heart of the enemy right on camera. So he wanted to strike terror into the hearts of government soldiers. He was asked by journalists - is he on a scary video? He answered: I have a video and more terrible where I saw the wrong one. Western insurgency sponsors saw that the fall of Quseir would block the rebels' oxygen, and this could not be allowed. The Council of Friends of Syria, including the European powers and the monarchies of the Gulf, gathered in Jordan and demanded that Bashar al-Assad stop and retreat. Real diplomatic war broke out.

The Americans suddenly remembered the suffering of the civilian population - although they stubbornly refused to condemn the terrorist attacks in Damascus, which killed hundreds of civilians, but then they referred the matter to the Security Council.
Russia did not flinch, vetoed their draft resolution, and thwarted the enemy’s plans to hold on to this most important foothold. Cannibalism did not help: the key to Damascus, the city of Quseir was taken by government troops after three weeks of desperate fighting, the rebels fled, and the civilian population remained in their homes and joyfully met the army, contrary to forecasts.

The Lebanese militant organization Hezbollah made a huge contribution to the victory. Yes, not exactly a charitable organization; maybe mother Teresa would not approve them, but in battle they have no equal. In 2006, they defeated the region’s strongest Israeli army. Then there was a joke in Israel: “Our troops took Marge Ayyun, the capital of Hezbollah. This is the sixth Marge Ayyun, who take our valiant armed forces this week. " Hezbollah is not just militants, but rather a religious Shiite military order, although it is supported by both Christians and Sunnis. His fighters do not pose for photographers, do not talk with journalists. But they know how to fight.

So far, they have refrained from directly participating in the war, but this time, Hezbollah leader Sheikh Hassan Nasrallah said before the decisive battle, the future of not only Syria, but also of Lebanon and the entire region is being decided. After all, the Americans are unleashing a terrible internecine war everywhere, as they did in Iraq - they are putting off Sunnis, Shiites, Christians, and Alawis. To do this, they created Takfirs - this is the name of Muslim extremists, who are considered by other Muslims to be kafirs, unfaithful. Takfira, the “Trotskyists of Islam,” who are ready to kill everyone who does not share their positions, have become weapons in the hands of the United States and Israel, Nasrallah said. If they are not stopped, Syria, Iraq, Lebanon, Jordan, and then the Caucasus will burn in the flames of war.

He raised the slogan - "turn the civil war - into a war with the instigators of internecine wars, that is, with takfirs." Under this slogan, all factions of a divided Syrian society can fight shoulder to shoulder.

In Israel, they hoped that Hezbollah would be ground in an al-Qusayr meat grinder. Grind were supposed to be fighters al Nusra, Syrian takfira. Israeli military experts predicted that the Hezbollah units would even lose a thousand or two thousand fighters and crawl back to Lebanon, lick their wounds. The entire combat power of Hezbollah, according to Western estimates, is about four thousand fighters. If this forecast had come true, Hezbollah would have left the arena for a long time. But in the battles for Al Quseir they lost “only” about a hundred fighters, too many, but not fatal. At this price they snatched the victory.

With their usual duplicity, the Americans protested against the participation of Hezbollah in the battles for Al Quseir. At the same time, they gave more weapons and money for takfir militants from fifty countries, which they also brought to Syria for war with the legitimate government. But now, after the victory over takfirs, for the first time in two years there appeared hope for an end to the internecine war, which they incited. Hope for Syrians is a threat to Israelis and Americans, and they are going to intervene more actively in the course of events in Syria. Despite an important victory, the war is not over.

Ctrl Enter
Noticed oshЫbku Highlight text and press. Ctrl + Enter
We are
Interview by President Bashar Al-Assad to the Sunday TimesOleg Valetsky about the wars in the Balkans, their causes and Russian volunteers
Military Reviewin Yandex News
Military Reviewin Google News
71 comment
Information
Dear reader, to leave comments on the publication, you must to register.