Regional corruption as the main threat to the security of Russia 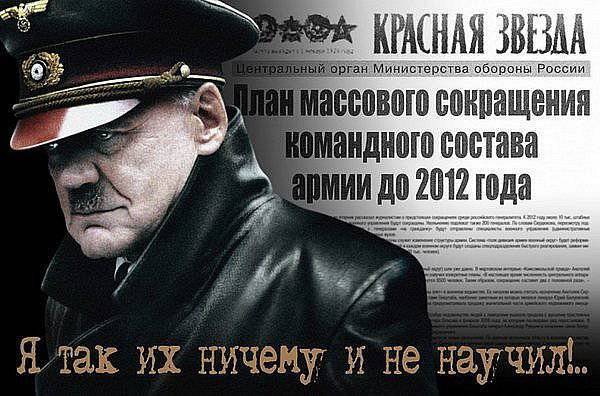 The realities of modern Russia are such that the ex-minister of defense Anatoly Serdyukov became a kind of if not a banner, then a symbol of the state system. While the office of the head of the Investigative Committee, Alexander Bastrykin, is trying to impose the red flags on all sides, he feels like quite well: he flies abroad, does not give interviews and does not testify against himself ...

Meanwhile, criminal cases in which Serdyukov passes as a witness, belong to the category, which is popularly called “economic”: something is not so sold, something is not there, and he has not bought something, has hidden something from his former department, etc.

And it is very strange that the attention of the investigators is not attracted by that aspect of the activities of the ex-minister, which was directly related to the fulfillment of his direct official duties, that is, ensuring the defense capability of the Russian Federation. But in fact Anatoly Serdyukov instead of building the Armed Forces and organizing their management, at best, they created special schemes that could ensure profit from everything that was possible.

Under the pretext of cutting costs, the entire military aviation Russia was driven into several so-called air bases, where hundreds of aircraft on each began to be based immediately. The remaining airfields and military camps were simply abandoned. For several decades, remembering the terrible lesson of 1941, our country was building and expanding the airfield network in order to minimize the consequences of the first strike of a probable enemy, if such a thing had happened. It sounds especially topical now, when weapons The first strike became cruise and ballistic missiles. The softest definition for such a decision is wrecking. But now it is not the 37 year, as President Vladimir Putin noted ...

But besides that, Serdyukov expelled 200 thousands of officers and 150 thousands of ensigns from the army, sharply reducing the level of professional training.

It was he, along with the former chief of the General Staff, who actually deceived both the people and the Supreme Commander when he spoke about the 100-readiness of the brigades during the 1 hour (!) To be ready to act as intended, while those were equipped with 60-70 percent of the regular number and could not fight.

Serdyukov with Makarov destroyed the harmonious system of management of the species and genera of the Armed Forces.
They introduced the so-called outsourcing in the army ... Once beaten by Hitler's General von Mellenthin, becoming a historian after the war, he wrote:

- Field kitchen, almost sacred in the eyes of soldiers of other armies, for the Russians is just a pleasant surprise and they can go without it for days and weeks. A Russian soldier is completely satisfied with a handful of millet or rice, adding to them what nature gives him. Such proximity to nature explains the ability of a Russian to become, as it were, a part of the earth, literally dissolving in it. The soldier of the Russian army is an unsurpassed master of disguise and self-digging, as well as field fortification ...

The strength of the Russian soldier is due to his extreme closeness to nature. There are simply no natural obstacles for him: in impassable woods, swamps and swamps, in a roadless steppe everywhere he feels at home. It crosses wide rivers on the most elemental means at hand, it can pave roads everywhere. In a few days, Russians build many kilometers of gati across impassable swamps ...

А Serdyukov with Makarov decided to correct the "mistakes" of dozens of generations of Russian soldiers ... And the very first teachings showed that the businessmen in the field cannot provide the troops. And they will not do that. But profit is above all.

For some reason, one of the main merits Serdyukov call the increase in the monetary allowance of the military. But does the army is a private office, and the Minister of Defense pays salaries to employees from their incomes ??? But that was probably how he felt.

Perhaps the hardest result of the former command of the Ministry of Defense was the spirit of acquisitiveness that penetrated the troops, as the Chief Military Prosecutor has been talking about for several years now Sergey Fridinsky: The number of officers convicted for attempted fraud, theft, and corruption has increased significantly ... And isn't this undermining morale and alertness? Or is there no such article in the Criminal Code?

In a sense of this Anatoly Serdyukov became the personification of the modern Russian political elite and even some of its sacred way, a kind of “knight without fear and reproach (!?)” who is ready to find ways to extract income anywhere and at any cost.

The question involuntarily arises: if the Minister of Defense does such miracles, then what about the rest of the officials? After all Vasilyeva, Puzikov, Smetanova, Naginsky and the other associates of the ex-minister did not appear from the sky, they came, firstly, because he called them, and, secondly, they came from the regions.

And it doesn’t matter with what: Moscow, Peter, Novosibirsk or Tula do not matter, because everywhere, and the people know it well in the field, the goals of the local bureaucracy are radically different from the aspirations and hopes of the population.

For example, now the Far East is literally sinking. And last year they held the APEC summit, which cost billions of rubles. Only for holiday fireworks by order of the Prime Minister Dmitry Medvedev spent 275 million rubles! Why the former plenipotentiary of the President in the Far East district Viktor Ishayev did not lay in the way of the summit and did not say:

- I, here, you know, the whole edge can drown ... What APEC? What salutes? We must build dams and reservoirs, regulate the course of the Amur and other rivers ...

But he did not do this and preferred only to follow instructions from Moscow. Maybe because it was a question of huge money?

The regions are well aware of the procedure for spending budgetary funds coming from Moscow. Every year, regional and federal Audit Chambers routinely register “inappropriate spending of budget funds.” And people are sure: under this crafty formulation lies the banal reception of “kickbacks” and “cuts” with the subsequent transfer of a significant part of them to the capital, and try to convince them of the opposite ...

Of course, in the regions there are other ways to replenish the purse of an official, depending on his position. Some feed on endless road repairs, and the truth is, what kind of fool would be good at repairing roads, if every year you can receive funds from the budget for the same section. Then "their own" firm wins a fictitious competition, followed by a "rollback" to the necessary official, and everyone calms down until next spring. All, except for ordinary drivers who curse a similar order of different non-print expressions.

The higher official level is the allocation for building, selling or renting land and buildings. This is, so to speak, Serdyukovsky diagnosis, but in the regions it has been mastered for a long time.

And here are the latest battle reports from the field ...

Sovetsky District Court of Tula, which sentenced the former governor of the Tula region to 9,5 years in prison Vyacheslav Dudka. The court found that in November 2010 of the region, then director of the region’s property and land relations department, Viktor Volkov, in concert with Governor Dudka, received a bribe from XRUMN Corporation in 40 million rubles through an intermediary. in Tula for rent for three years for the construction of a hypermarket.

Novosibirsk Governor Vasily Yurchenko summoned for questioning by the Investigation Committee, a criminal case was initiated into the sale of LLC Taktika in the 2010 year of an unfinished hotel complex and an area of ​​1 199 square. m at st. Chaplygin, 54 for 22,7 mln. Rub., Owned by OJSC Gas Transportation Complex of the Novosibirsk Region (100% is owned by the regional department of property and land relations). It is located in the center of the third city of Russia and was originally estimated at ... 40 432 000 rubles. However, the proposed auction was canceled, and the complex was sold, according to the investigation, at a lower price in almost 2. I wonder who got the difference?

But these are governors ... And if you analyze the decisions of the courts and the reports of the press services of the RF IC, the General Prosecutor's Office, it becomes obvious: in the regions they take everything from nurses, paramedics, chief physicians, school principals and rectors of universities, and ending with municipal and regional officials.

And it has the most direct relation to state security, because the system of state, regional and municipal government represented by officials instead of fulfilling their duties in the worst case is generally engaged only in acquisitiveness, and in the best - in acquisitions, in the first place, in fulfilling the residual principle .

Therefore, there are uncontrolled forest fires, floods in Krymsk and on the Amur River, accidents at hydroelectric power plants and other tragic incidents, which are customarily attributed either to natural disasters, or to a coincidence of circumstances.

Therefore, every year more people die on the roads in 2 than were killed during the Afghan war in 10 years. Or maybe the reason is the criminal negligent attitude of road builders who do not generally meet the requirements of the standards? So they are also the roof of local officials ...

Once again: such a position in the management system is directly related to the security of Russia. Its specificity is such that the federal authorities in Moscow, and not local authorities, will always be considered guilty on the ground. Suffice it to recall the sad fate Slobodan Milosevic, Saddam Hussein, Muammar Gaddafiwho were betrayed by their inner circle for personal gain. Why are they there, and how did the republican and regional elites of the USSR behave when the Union collapsed?

And is it really possible for someone now to hope that in the event of a military threat a significant part of our officials, choosing between their condition and country, will choose a country ???

Russia needs a new generation of managers, for whom the service to the Fatherland will not be expressed in the crunch of banknotes. It is thought that this is well understood in the Investigation Committee and the General Prosecutor's Office.

Ctrl Enter
Noticed oshЫbku Highlight text and press. Ctrl + Enter
We are
About Stalin and KhrushchevWhat you didn't want to know about England
Military Reviewin Yandex News
Military Reviewin Google News
43 comments
Information
Dear reader, to leave comments on the publication, you must sign in.