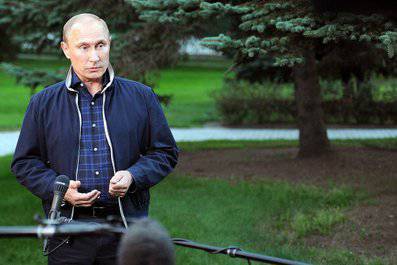 QUESTION: Vladimir Vladimirovich, you have been on a working trip for almost a week now - Siberia and the Far East. Is it caused by difficult weather conditions and their consequences or something else?


VLADIMIR PUTIN: This is primarily due to the great significance of Siberia and the Far East for Russia.

On the whole, it was a planned trip, but, of course, after the well-known severe events related to floods started, with floods, the configuration of this trip had to be somewhat changed and more time was given to these problems.

And I think that, of course, we did the right thing. A large number of ministers of the Government of the Russian Federation arrived here. And when people right on the ground with their own eyes see what is happening, what difficulties people face, then the necessary decisions are made easier and more balanced.

I am sure that the decisions that we have today, as a result of the three-day work here for almost the entire Government, are optimal. And you heard about these figures, they, in general, should close the main problems of citizens.

The most important thing is that all this be implemented on time, on time and with high quality.

QUESTION: You are talking about a trip to the Far East, but Syria is also very relevant now. The thing is that the day before the British parliament made a decision and voted against military intervention, and some countries, including Germany and even the NATO alliance, expressed a negative attitude about military intervention in Syria. For you, in general, it was expected - the decision of the British Parliament itself? And what do you think about this?

VLADIMIR PUTIN: Frankly, for me this is a complete surprise. I think that all of you, including me, in recent years, we have become accustomed to the fact that everything is accepted in the Western community without any special discussions - at least, it always looks like this - and in accordance with the wishes and position of the main partner, there is the United States of America.

If this time some kind of failure occurred, then, I repeat, for me it is unexpected, and moreover, I am even surprised by this position.

On the other hand, it still shows, apparently, that in Great Britain, although it is the main, main geopolitical ally of the United States in the whole world, I think, in Europe, all the more - even there are people there who are guided by national interests, common sense, value their sovereignty.

But, among other things, it is also the result of an analysis of what has happened in recent and previous years. I mean those tragic events that occurred in the Middle East region, in other countries.

And despite the stated goals, the achievement of these goals is still very problematic: I mean Afghanistan, and even more so Iraq, Libya and other countries. As for Egypt, we know what is happening there. Therefore, I think, I do not think - I am sure that people analyze the events, draw conclusions and react accordingly.

QUESTION: Vladimir Vladimirovich, please tell me, personally, how do you think, who applied the chemical weapon in Syria? And tell us about your assessment of the situation that has developed in this regard in this country.

VLADIMIR PUTIN: We have had a long discussion with our American partners on this issue. You know our position.

As for this case. As is known, the Syrian government has also appealed to the international community to inspect, as they believed, the use of chemical weapons by the militants. But this, unfortunately, was not done. The reaction was followed only after the 21-th number, after these tools were once again applied.

What is my rating? Common sense speaks for itself. Syrian government troops are attacking. In some regions, they surrounded the rebels. Under these conditions, to give a trump card to those who constantly call for external military intervention is utter utter nonsense. This does not correspond to any logic at all, and even on the day the UN observers arrive.

Therefore, I am convinced that this is nothing more than a provocation of those who want to draw other countries into the Syrian conflict, who want to get support from powerful participants in international activities, above all, of course, the United States. I have no doubt about that.

As for the position of our American colleagues, friends who claim that government forces used weapons of mass destruction, in this case chemical weapons, and say that they have such evidence, let them then present them to the UN inspectors and to the Security Council. There are no references to the fact that they have such evidence, but they are secret, they cannot be presented to anyone, they do not stand up to scrutiny.

This is simply disrespect for our partners and participants in international activities. If there is evidence, they must be presented. If they are not presented, then they are not. The reference to the fact that these are some kind of regular interceptions of some negotiations, which prove nothing, cannot be taken as the basis for making such fundamental decisions as the use of force against a sovereign state.

QUESTION: Tell me, please, lately you have had many important telephone conversations with the British Prime Minister, with the Chancellor of the Federal Republic of Germany, with the President of Iran. Did you have talks on Syria with US President Barack Obama? And if so, what was agreed, and if not, maybe you want to give him something right now?

And the Americans took upon themselves the obligation to bring the armed opposition to these talks. But this is a difficult process, I understand, and, apparently, they do not succeed. But lately, especially after the new accusations of the Syrian government in the use of chemical weapons, I did not have such negotiations with the President of the United States.

As for our position, it is known. What would I say? I do not even know. You know, I would first of all appeal to him not as my colleague, not as the President of the United States and the head of state, but as the Nobel Peace Prize winner. We need to remember what happened in the last decade, how many times the United States initiated the armed conflicts in different regions of the world. And did it solve at least one problem?

Afghanistan, I have already said, Iraq ... After all, there is no comfort, there is no democracy there, as our partners allegedly sought. There is no elementary civil peace and balance. All this needs to be looked at before making a decision on delivering rocket-bombing attacks, which, of course, will be followed by victims, including among civilians. Is it not possible and not necessary to think about it? Of course, convinced that necessary.

And as a colleague I would say that in the near future we will have a meeting in St. Petersburg. I hope that the President of the United States will be there among the participants, and we will certainly have the opportunity to talk in such a wide range, including with regard to the Syrian problem, again.

Of course, the G-20 is not a formalized legal body, it is a platform that cannot replace the United Nations Security Council, only it can decide on the use of force. But this is a good platform to discuss the problem. Why not take advantage of this?

Incidentally, with regard to the interests of the United States. After all, in the United States itself, pay attention to the American press, pay attention to the statements of politicians, experts, this or that military action is evaluated differently. Most analysts are now inclined to think that, for example, the action against Iraq was erroneous. But if we assume that there have been mistakes in the past, why is it now considered to be infallible?

We urge how to think, before making such decisions, which clearly run counter to the opinion of the international community and destroy the entire security system and, of course, are detrimental to specific people. The fact that something needs to be done is obvious. But haste in such things can lead to results that are completely opposite to those expected.

QUESTION: Vladimir Vladimirovich, how do you think the probability of a strike by the Americans is still high? And what will Russia do if such a blow is dealt?

VLADIMIR PUTIN: Do you know what, how do I know? That you ask them. I can tell you why this is happening, why this is being discussed.

You see, this is an elementary thing for people who are involved in the course of events. The Syrian government army is advancing. The so-called rebels in a difficult position. They don’t have the weapons that government troops have: they don’t have aviation, no rocket technology, no modern missile and artillery systems.

What should be done to those who sponsor these so-called rebels, and those who are behind these sponsors? Help them militarily. How? Fill this missing niche here. It’s impossible to supply them with airplanes and rocket systems - it’s impossible to teach them. Only one way out - to strike themselves. If this happens, it would be very sad.

Ctrl Enter
Noticed oshЫbku Highlight text and press. Ctrl + Enter
We are
Interview of V. Putin to Channel One and the Associated Press AgencyWhat you didn't want to know about England
147 comments
Information
Dear reader, to leave comments on the publication, you must to register.