Tankman with an unusual fate 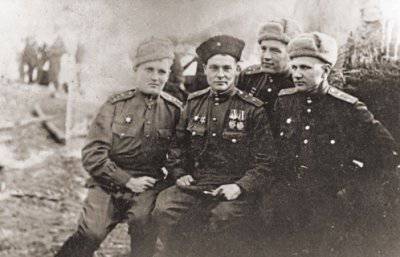 “Ivan Kirillovich Yakovlev is so majestic that for many years he will rise in the ranks of the generals as a vivid example of hard work, military skill and the mind of a truly military scale. An experienced military leader, he created modern Internal Troops on a rigid military basis. And time itself proved this to be true: only such troops could stand up to the tasks that had to be carried out when armed conflicts broke out, ”wrote Deputy Interior Minister, Commander-in-Chief of the Interior Troops of the Russian Interior Ministry, Army General Nikolai Rogozhkin.


For more than 200-year-old history From the 1811 of the year, the internal troops of the Ministry of the Interior of Russia were replaced by six dozen commanders, each of whom had his own fate, coupled with the fate of law enforcement troops of a particular period in the life of a great country.

Two generals from this glorious pleiad deserve to be singled out separately: General from Infantry Yevgraf Komarovsky and General of the Army Ivan Yakovlev. Both of them at different times, but both during the years of radical reforms commanded the Internal Troops for 18 years each.

Komarovsky (1769 – 1813) is called the founding father of the Separate Corps of Internal Guard, Yakovlev (1918 – 2002) - a prominent Soviet military leader, who gave the USSR Soviet Interior Ministry a modern military look.

Old Moscow district Lefortovo. The streets Soldatskaya, Krasnokazarmennaya, Krasnokursantsky passage ... Between them - the Cadet parade ground. Here two buildings of different epochs in which most of Ivan Yakovlev’s military service took place look at each other with such dissimilar facades. In the former Catherine Palace at the Military Academy of Armored Forces he studied. With the head of this academy, Marshal of Armored Forces Oleg Losik, they were friends for many years. And in the building opposite, where the Main Command of the Interior Forces of the Ministry of Internal Affairs of Russia still resides, Ivan Kirillovich served and worked until the end of his amazing, meaningful life.

Born Ivan Yakovlev 5 August 1918, in the Stavropol village Chernolesskoye in a peasant family. He graduated from agricultural college. Called to the army in the 1939 year, Voroshilovsky shooter, excellent TRP, he was sent to the Kemerovo artillery and mortar school. And after a few months he commanded a mortar platoon who took part in the Finnish campaign. There were the first tests: severe battles, severe wounds.

In the Great Patriotic War, he was a mortar, and the commander of the artillery battalion, and self-propelled gun. Fronts: Volkhovsky, 1-th Ukrainian, 2-th Belarusian, awarded the Order of the Red Banner, Suvorov III degree, World War I degree, Red Star.

Experienced war veteran after the war, after studying at the BTV Academy, passed successively the steps of career growth - from the deputy commander of a tank regiment to the commander of a mechanized division.

Fate favored an initiative, inquisitive, strong-willed commander. He was assigned to such areas where commanding skills, the experience of a military educator, and the relentless replenishment of theoretical baggage were required. After the Academy of the General Staff, Ivan Kirillovich served in the Main Directorate of Combat Training of the Ground Forces, where he oversaw tank schools, planned and conducted exercises, developed charters, manuals, training programs, shooting courses.

Appointment to the post of deputy commander of the Moscow Military District is a logical stage in the career growth of a promising general.

As Ivan Kirillovich himself said, General Secretary Leonid Brezhnev personally dismissed all doubts and excuses with his convict-convincing: “We must go, comrade Yakovlev, we must!” Then, at the end of 60, after the disastrous voluntaristic Khrushchev reforms in the army and law enforcement agencies The internal troops needed a strong-willed, energetic, enterprising commander. The choice of Interior Minister Nikolai Shchelokov, who considered dozens of candidates from among army generals of the district level, fell on Yakovlev - a veteran front-line soldier, skilled practitioner and competent theorist, "the cause of the party and the government is betrayed."

At that time, they were neighbors with the paratrooper number 1, General Vasily Margelov - Hero of the Soviet Union, the legendary commander of the Airborne Forces. Eyewitnesses recall a conversation that took place between them during the New Year's feast. Margelov gaily and at the same time supposedly pitied Yakovlev asked how Ivan, a born tanker, had managed to get into the Interior Ministry troops. The newly-minted “general from law and order”, without a hint of embarrassment before the authority of Margelov, even with some kind of challenge, answered: “Wait, Vasily Filippovich, it will take several years, my explosives will not yield to your airborne forces in anything”.

Life proved that General Yakovlev did not throw words at the wind. Under him, the Internal Troops became a really strong, well-trained, combat-ready military structure capable of solving the most complex tasks. Step by step, step by step, height by height, the troops of General Yakovlev consistently and steadily developed and strengthened consistently and steadily. With the personal involvement of the commander of the troops, the statutes of the combat service, the manual for the staffs and other basic documents were developed, and the Military Council of the Internal Troops was created. In a short time, the problem of training officer personnel was vigorously resolved: the military schools of the Ministry of Internal Affairs were subordinated to the military central board, two new universities were created in Perm and Novosibirsk.

The troops carried out a colossal amount of service and combat missions - every day, every hour, every minute more than 100 thousand soldiers with combat weapons were on posts. The protection of corrective labor institutions and the escorting of convicts were well-known, traditional tasks of the Internal Troops. In addition, military guards guarded hundreds of important state facilities, transported special cargo. At the end of the 60s, dozens of completely new special motorized units were created in the Internal Troops, designed to protect public order. This has dramatically reduced the level of street crime in the country.

The development received and parts of operational assignment. Here, the well-known OMSDON - the Separate Orders of Lenin and the October Revolution was always the tested ground for innovations. The Red Banner Special Purpose Motorized Rifle Division named after F. Dzerzhinsky. It was here on the initiative of General Yakovlev that military special forces, now known as "spotted berets", were born.

Internal troops became mobile (their own aviation and naval units), well-armed, equipped with the latest communications and control equipment. They were able to solve tasks of national importance and national scale. During the Moscow Olympics, the World Festival of Youth and Students, the Goodwill Games, security was also on the shoulders of the military personnel.

Two orders of Lenin, the Order of the October Revolution, "For Service to the Motherland in the Armed Forces of the USSR" III degree occupy their deserved place alongside the front awards of the general on his parade uniform.

Yakovlev was a delegate to the party congresses, and he was a deputy to the Supreme Soviet of the RSFSR for four convocations.

The last feat in the battle biography of General Yakovlev is called the dramatic and heroic Chernobyl epic. From the time of the Chernobyl accident, the servicemen of the Internal Troops continuously performed tasks directly at the station, in the zone of radioactive contamination. Thousands of brave and sworn men passed through the crucible of Chernobyl. Among them was Army General Yakovlev. The zone of alienation was for him and his troops a zone of achievement. Along with other liquidators Chernobyl, Ivan Kirillovich was awarded the Order of Courage.

And another Russian order - “For Services to the Fatherland” IV degree - was awarded to the military commander, who worked in the group of inspectors general of the Ministry of Defense, and then as a consultant to the Commander-in-Chief of the Internal Troops. The generals and officers of the Main Command of the Internal Troops of the Ministry of Internal Affairs of Russia have always listened to the opinion of this person, whose richest experience in leading troops even today remains an undoubted wealth, which will continue to be treated with attention and frugality.

The memory of an outstanding military leader is preserved in his troops. The Commander-in-Chief of the Internal Troops and the Council of Veterans established a Prize named after General of the Army Yakovlev to encourage useful troops to work. A memorial plaque in honor of General Yakovlev was opened on the building of the Main Committee. Today, the Novosibirsk Military Institute of the Internal Troops of the Ministry of Internal Affairs of Russia bears his name.

On the former Cadet parade ground is now a square. A monument to the pilots of the Normandy-Neman regiment has been erected here, and a memorial to the Soldiers of the Internal Troops who died in the performance of military duty is nearby.