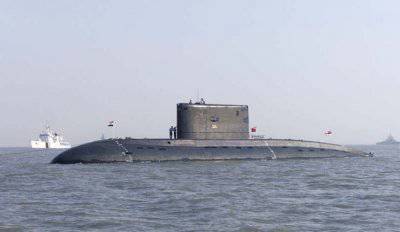 On board the Indian submarine (S) S63 "Sindurakshak" two explosions occurred, as a result of which she sank at the dock of a naval shipyard in Mumbai. 18 crew members aboard the submarine most likely died.


Around midnight, a fire started on the boat, which the crew tried to put out for two hours. Then two explosions occurred: one of lesser force, the other more powerful, the sound of which was heard in the southern part of Mumbai, and the fireball was visible at a considerable distance.

This boat was built in Russia (tab - 1995 year, launching - 1997 year) under the project 877EKM. In 2010, a fire broke out in the battery compartment aboard the Sindurakshak, killing one Indian sailor. The cause was called a faulty battery valve, due to which the concentration of hydrogen gas increased, leading to an explosion. At the same time, all domestic-built boats have automatic gas analyzers, which determine the concentration of hydrogen in the air and signal that the permissible values ​​are exceeded. The actions of the crew when the alarm is triggered do not pose any difficulty. They are standard and must be repeatedly worked out in training for the struggle for survivability.

Just recently, the submarine was modernized at the Zvezdochka plant (Severodvinsk) and was transferred to the Indian Navy 27 in January of this year. As a result of the modernization, S63 received the Club-S missile system, a new control system weapons, the hydroacoustic complex and some other systems have been updated. The tragic death of a submarine can have serious consequences and can affect the military-technical cooperation of Russia and India. It is lately and so is experiencing difficulties.

22 – 24 Jun. US Secretary of State John Kerry visited India on an official visit. The purpose of the visit was negotiations on the evolution of the regional architecture of Asia. In other words, the US is trying to split the Shanghai Cooperation Organization (SCO) by playing on the contradictions of India and China. It must be said that the SCO (which includes Russia as well) is an organization that does not suit the United States by the very fact of its existence. This is an attempt to remove the contradictions between the countries of the region, to solve the issues of Eurasian security and economic development by the countries of the region themselves. That is, without the participation of the United States. Another thing is that the influence of China in the SCO prevails. And India and China have many difficulties in relations. China will no doubt be the economic leader for the foreseeable future. And he will support his leadership with military power. This leadership fears India, which has had several military conflicts with China. And these fears are skillfully played by the Americans. John Kerry in New Delhi openly made it clear that the United States is ready to help India strengthen, naturally, in peak China:

"The United States not only welcomes the rise of India as a world power, but also intends to promote this in every way."

In 2009, a bilateral agreement was signed between the United States and India on US control over the use of modern weapons in the Indian armed forces. And this agreement is directly related to Russian-Indian cooperation. We began to lose military contracts to Western companies, and in general, the volume of Russian arms supplies is beginning to decline. Western "partners" seek to wrest India from regional structures, switching this country to their own interests.

Meanwhile, India is one of the main foreign customers of the Russian aviation, rocket and naval technology. Indian orders, while the Russian leadership neglected the country's defense capabilities, largely allowed the domestic shipbuilding and aviation industries to exist and develop. We are now using the fruits of Russian-Indian military-technical cooperation when Russia finally needed a navy and aviation. The production teams, the experience of the serial construction of ships and submarines, the experience of technical specialists who commissioned the most complex combat systems, have been preserved. India today remains our strategic partner in the joint creation of promising types of weapons and regional security.

This situation can not please the United States. In their interests, the elimination of any regional partnership of sovereign countries, especially in the military field. There is an active informational influence on the field of our bilateral cooperation. The quality of Russian armaments and the expediency of their purchases are being questioned, and any reason to prove the ineffectiveness of our partnership is immediately used.

No doubt, this will be the case with the death of the Sindurakshak submarine. This is all the more likely that the tragedy occurred right on the eve of Indian Independence Day, which is traditionally associated with a demonstration of military power. This is too “a good” coincidence not to use it against Russian-Indian military cooperation and not to question the quality of Russian weapons. It is no coincidence that the commander of the Indian fleet Admiral Joshi did not rule out the possibility of sabotage. He said that a fire should not have happened, but it is obvious that the boat’s safety systems were not functioning.

It should be added that the boats of the 877 project are considered among the most massive and reliable in the world. They were built for many countries (China, Algeria, Iran), are part of the Russian fleet and successfully perform military service.

Ctrl Enter
Noticed oshЫbku Highlight text and press. Ctrl + Enter
We are
Opinion: Why nuclear submarines of the 705 project were not needed by the fleetList of destroyed the largest and most high-tech enterprises
Military Reviewin Yandex News
Military Reviewin Google News
108 comments
Information
Dear reader, to leave comments on the publication, you must to register.