While the offensive of the troops of the Voronezh Front was halted by the operational reserves of the Wehrmacht and they had to conduct heavy battles under Bogodukhov and Akhtyrka, the Stepnoy Front fought for Kharkov. The front commander Ivan Stepanovich Konev, having intelligence data about the powerful defenses of the German troops in the Kharkiv region, planned to destroy as much of the German group as possible at the approaches to the city, preventing their withdrawal to the defensive lines and into the city limits.

The Germans prepared the city well for defense. At a distance of 8-14 km from Kharkov there was an outer bypass, which was based on several strong points. The most important of them were Dergachi, Cherkasskoe Lozovoe, Tsirkuny, Prelestny, Yuzhny, Vasischevo. All settlements were prepared for a perimeter defense. The approaches to settlements and strongholds were covered by anti-tank and anti-personnel minefields, and engineering barriers. All the roads that led to Kharkov from the north and southeast were destroyed, the bridges on them were destroyed. Separate areas were mined, prepared "surprises" in the form aviation bombs. The area between the outer and urban outlines was also prepared for defense. It was equipped with intermediate and cut-off positions, strong points and resistance nodes were prepared. From the north and west, the city was "helped" by nature to protect it, there were significant forests. The Germans fortified these areas with notches, rubble, mined the passages, set up groups of machine gunners.

The urban defensive line was based on sturdy stone buildings that were turned into long-term firing points. Artillery and mortar positions were created on the lower floors, and machine gun nests on the upper floors. All the direct approaches to the city, the entrances and exits from it, the outlying streets were mined and barricaded and obstructed. The inner quarters, especially in the northern and eastern parts of the city, were prepared for all-round defense. The main part of the artillery means was concentrated on the eastern and northern part of the city bypass.

For the defense of the Kharkov fortified area, the German command formed a strong group, which consisted of units of the 167th, 198th, 168th, 106th, 320th, 282nd and 39th infantry, as well as units of the 3rd and 6th tank divisions. These divisions were already seriously battered in previous battles, but retained combat effectiveness. In addition, they were regularly reinforced by the transfer of reinforcements. So, on August 19, south of Kharkov, in the Konstantinovka area, the German command brought into battle a fresh 355th infantry division, which was transferred from the Crimean peninsula. In addition, various SS detachments, security and police units were involved in the defense of the city. Adolf Hitler demanded to keep the city "at all costs" and widely apply repression against soldiers and officers who show signs of cowardice and unwillingness to fight to the last.

The defeat of the Kharkov group of Germans.

11 August 1943, parts of the Steppe Front approached the outer defensive line and tried to overcome it. However, only 12 August, pulling up all the artillery forces, the front forces were able to somewhat penetrate the defensive lines of the Wehrmacht. The position of the troops was complicated by the fact that the 5-I Guards Tank Army, which was handed over to the Steppe Front, was involved in repelling the German counterstrike under Bogodukhov, and then in the area of ​​Akhtyrka. The shortage of armored vehicles had to be compensated by artillery. On August 13, the troops of the 53, 57, 69 and 7 Guards armies broke through an external defensive line, and in a number of places reached the city line, engaging in fighting on the outskirts of the city. 13-17 August were fierce battles on the outskirts of the city, the battle continued at night. Both sides suffered heavy losses. Thus, in some regiments of the 7 Guards Army, commanded by Mikhail Shumilov, only 600 people remained, and only 1 of the tank remained in the 44-m mechanized corps of Mikhail Solomatin (less than the number of the tank brigade). German prisoners reported high casualties in German troops. 30-40 people remained in many companies of the Kempf task force in Kharkiv. 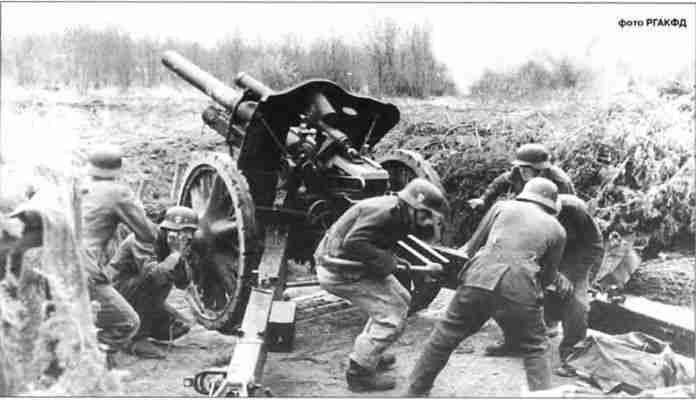 August 18 The 57 Army under the command of Nikolai Gagen resumed the offensive, bypassing Kharkov from the south. The shock grouping of the army as part of the 5 rifle divisions reinforced by armored vehicles, was to advance in the general direction of Merefa. 18-22 August 1943, both flank of the Steppe Front fought hard. The 57 Army tried to cover Kharkov from the southeast. 53-I army under the command of Ivan Managarov tried to cover the city from the north-west. On August 18, Managarov’s army attempted to break through the forest in the north-western outskirts of Kharkov. However, the Germans turned the forest into a real fortified area, with a multitude of machine-gun and artillery firing points. All attacks of the Soviet troops were repulsed. Only at nightfall, pulling up artillery, the 53-I army was able to break through the forest. In addition, part of the army troops went around the forest from the western direction. In the morning of August 19, army troops reached the Uda River and crossed it in a number of places. By 20 August, the 53 Army achieved success in the area of ​​Korotich, a city located on the Kharkov-Poltava railway. Soviet troops occupied a number of settlements in 6-12 km north-west of Kharkov. Using the success of the neighboring 53 Army, the Kryuchenkin 69 Army concentrated most of its forces on its right flank. Kryuchyonkin's army began to quickly bypass Kharkiv along the northwestern and western fashi of the urban defensive line.

By order of G. Zhukov, in order to speed up the liberation of Kharkiv, on August 20 the 5 Guards Tank Army was transferred to the forest massif south of Field. Rotmistrov’s army was to strike at Korotich and cut the railway and prevent the German troops from retreating from Kharkov in the western and south-western directions. The 18 Tank Corps under the command of A. V. Egorov and the 5 th Guards Mechanized Corps of BM Skvortsov participated in the strike (one building of Rotmistrov’s army was left in the area of ​​Bogodukhov, in case of a new German counterattack).

Rotmistrov's army launched an offensive in the morning of August 21 1943. In the first echelon, the 18 tank corps was advancing. Tankmen had to force Udu under attack by the enemy, part of the tanks got stuck on the marshy flood plain and exploded on mines. As a result, the corps was able to go on the offensive only in the evening and advanced only 1 km in a day. On August 22, the 5 th Guards Mechanized Corps was brought into battle. After a fierce battle by the end of the day, the Soviet soldiers occupied Korotichi. At the disposal of the German command, only two roads remained in the southwestern direction, one iron and one highway, they led from Kharkov to Merefa and Krasnograd. Both communications were subject to the continuous influence of the Soviet Air Force.

On August 22, the SS Panzer Division Das Reich received reinforcements from Germany — the Panther tank battalion. The division "Reich" immediately launched an offensive. This allowed the German command to stabilize the situation on this sector for some time. It began a fierce tank battle. Rotmistrov tank crews fought with the Reich SS. On August 23, German troops were able to knock out Rotmistrov’s army (which had lost most of its equipment in previous battles) from Korotich. The forward detachments of the army were surrounded. Soviet troops fiercely resisted. The rifle men established themselves in a small area of ​​the forest and, with the support of several tanks and anti-tank guns, fought off attacks from the 11 Army Corps. The Germans suffered heavy losses. Only the attack of flamethrowing tanks put an end to the resistance of the Russians, this section of the forest was simply burned.

The success of the Reich division could no longer help the German command to keep Kharkov in their hands. He only provided the withdrawal of troops from the city. Under the threat of complete encirclement of the Kharkov group, the German command 22 of August began withdrawing troops from the city. In the afternoon, Soviet intelligence reported that the enemy’s columns were retreating in a southwesterly direction. Trying to prevent the Germans from withdrawing their troops from attack, the Soviet command on the evening of August 22 issued an order for a night storming of the city. The city itself was stormed by units of the 69 Army and the 7 Army Guards. The German rear guards put up strong resistance, firing dense artillery and machine gun fire. They were also reinforced with tanks and assault guns. In 4 hours 30 minutes 183-division was able to get through to Dzerzhinsky Square. By dawn, most of the city was liberated from enemy forces. By 12.00 23 August 1943, the battles were completed and on the outskirts, Kharkov was freed from the occupiers. The remnants of the enemy troops, pursued by Soviet tank crews and pilots, fled to the south-west — across the Meref and Mzh rivers. The Germans threw a significant amount of equipment and weapons. During this time, German troops lost 78 tanks, 340 vehicles, 249 guns, and 900 machine guns. On this the main part of the operation "Rumyantsev" was completed. The Soviet capital saluted the liberators of Kharkov. 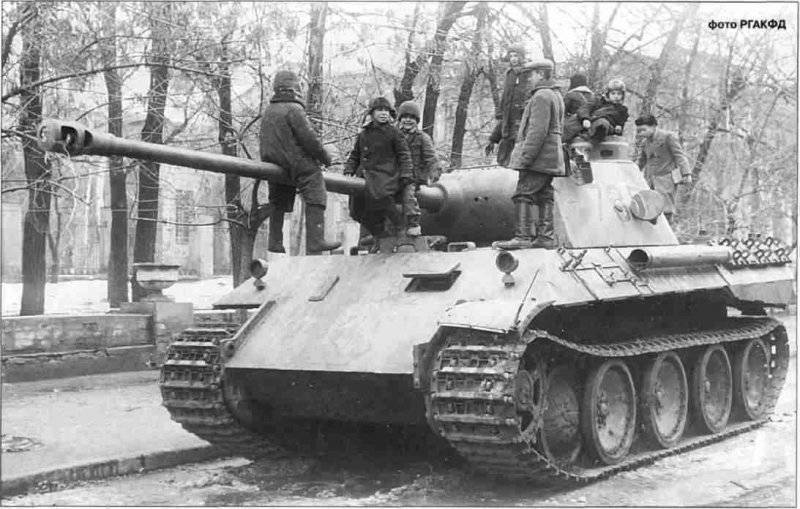 "Panther" on the street of the liberated Kharkov. August-September 1943

Soon was released and Akhtyrka. 19-21 August 27-I army was replenished with personnel and equipment. On the morning of August 21, the army launched an offensive, receiving orders from the front command to take Ahtyrka. However, due to the strong resistance of the enemy and the lack of tank support, the task could not be completed. German troops firmly held the immediate approaches to the city. In addition, the battle formations of the 27 Army were subjected to strong air strikes. As a result, the 27 Army was unable to independently solve the task of mastering Akhtyrka. 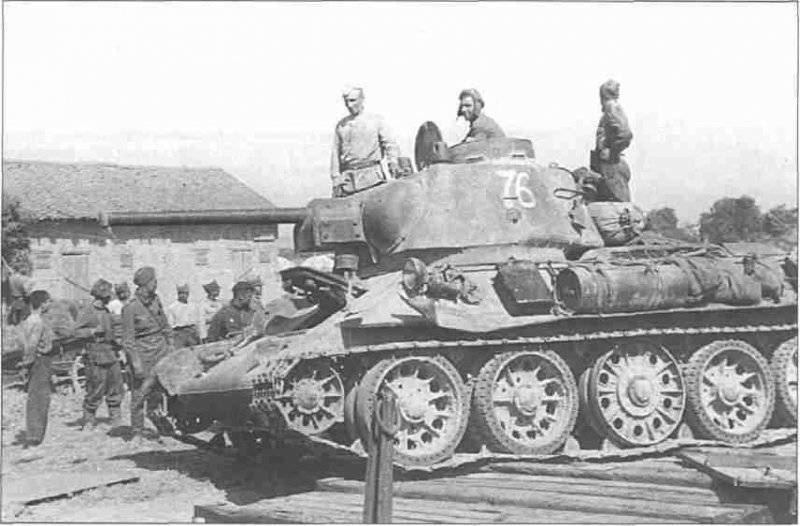 Tank T-34 on the outskirts of Kharkov.

Fracture occurred after the release of Kharkov by the Red Army. After leaving Kharkiv, the value of Akhtyrka as a Wehrmacht stronghold in the general defense system of the Belgorod-Kharkov sector was lost. In addition, there was a threat surrounding Akhtyrka. The German command decided to withdraw the Akhtyr garrison and withdraw the troops to a new defensive line. 23-24 August German troops left Akhtyrka. Intelligence of the 27 Army discovered the enemy’s retreat, and the commander Trofimenko ordered the pursuit of the enemy. 25 August 8, 147 and 155 rifle divisions of the 166 army moved to the attack in 27 o'clock in the morning. During the day, the 147-rifle division occupied the southern part of the city, the 155-rifle division — the northern part to the Akhtyrka river, the 166-division — freed the central part of the Akhtyrka. 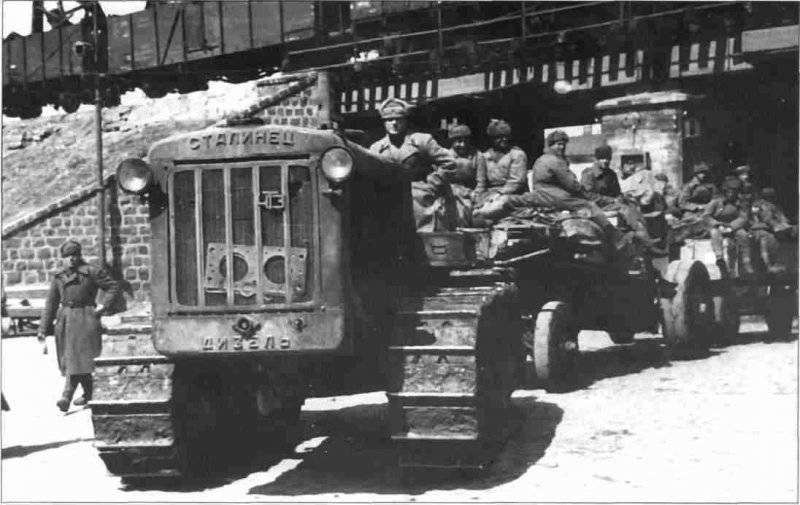 It should be noted that the offensive of the Voronezh and Steppe Fronts made it impossible for the enemy command to maneuver large operational and strategic reserves, create shock groups of them that would disrupt the offensive operations of the Red Army on one or another sector of the front or even be able to fundamentally change the overall situation on the Eastern Front . The German leadership was forced to drive its reserves from one front to another. In particular, the Great Germany tank division, which participated in the Citadel offensive operation, was first transferred to the Oryol sector, then it was sent from the Orel area to the offensive site of the Voronezh Front, to the Okhtyrka area. And the tank corps divisions of the SS were redeployed from the Belgorod-Kharkov direction to Mius-Front, with the start of the Rumyantsev operation, and hastily returned to the Kharkov region, where they took part in organizing a counterstrike under Bogodukhov. The transfer of selected German divisions from the Donbass to Kharkov allowed the troops of the Southern and Southwestern fronts to successfully carry out an operation to break through the Miuss defense line and liberate the Donetsk industrial region. 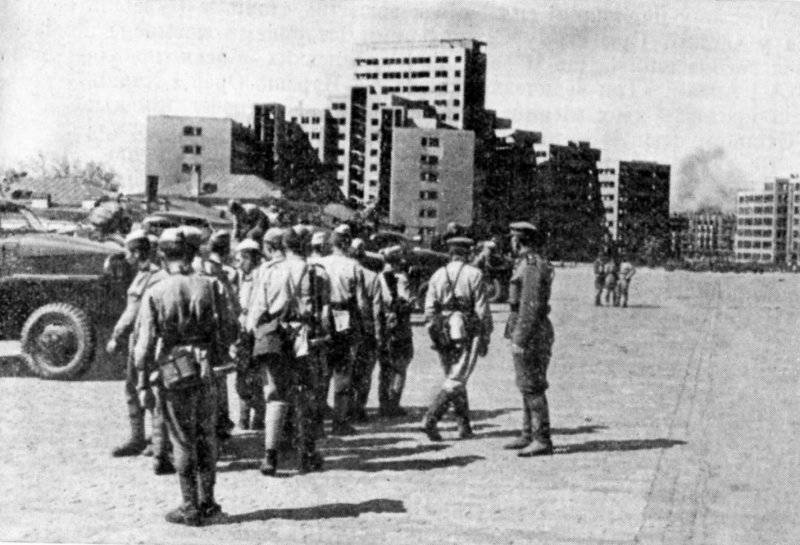