July 9 2013
52
As predicted by the “Messenger of Mordovia”, as the project for the creation of armored vehicles based on the heavy unified platform “Armata” is implemented, the criticism of it will increase.

Looks like the tank of the future, tried to unravel many, this is one of the best drawings on this topic.

This is partly due to the fact that these developments should show in Nizhny Tagil in September of this year only in closed session, for a very limited circle of high-ranking officials. And many have included a kind of "T-95 syndrome". We already wrote about it. Recall that at the very beginning of 90's, sensational information appeared in the media - in Russia, a new generation combat vehicle was finally created with a completely new layout, new engine, suspension, fire control system, a gun, etc.

This message caused a real explosion of patriotism, it was nice to know that at least in some ways, exhausted by endless reforms, Russia is still ahead of the rest. Our competitors in the West and the former Soviet territories tensed, took what is called a pause. Everyone began to wait, when Russia, at last, will show its miracle to the worldweapon. Years passed, and the “German”, that is, the promised T-95, was not there. And just as popular love can quickly be replaced by hatred, so here the disappointment has come to the place of initial admiration, which over time has only become stronger. 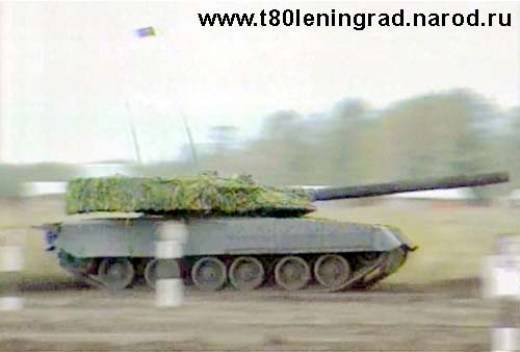 Oil was only added to the fire from time to time promises made by responsible persons that "soon" ... "just about" ... "an unparalleled" machine would be put into service. After such statements, many years passed again. And, in the end, all sorts of references to the promising Russian tank began to cause a violent negative reaction. T-95 became the hero of evil satirical drawings, jokes. There was a huge informational failure. Probably not for the whole history modern Russian weapons that would be so discredited. But, as it turns out now, a tank was actually created in Nizhny Tagil, which, by its characteristics, is inaccessible for many years to come.

It so happened that the authority of this combat vehicle, and, probably, of all domestic tank building, was saved by several photos of disgusting quality posted on social networks. Despite the fact that there was little that could be seen, it became clear to everyone that the 195 Object is not a myth, it is not for nothing that money spent and the failure of domestic tank building, as our "friends" from abroad tried to impress us. 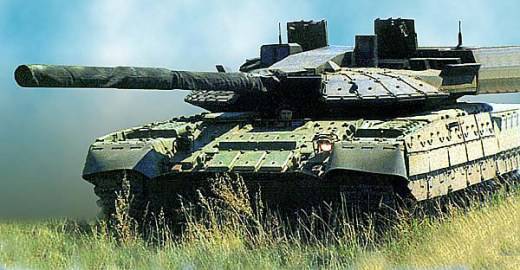 During the second show, only a gun was "swaddled in a tarpaulin"

And now many are experiencing the aggravation of the long-standing “informational disease”, and, moreover, the relapse proceeds more dramatically, the potential for disappointment in the story of the 195 Object begins to work. Therefore, in September, a tank should appear in front of taxpayers - even if it is tight, right on the rollers, a “Cape” bagged with the protection kit or something similar. After all, even in North Korea, they are trying to demonstrate to the people their latest developments.

As for the critics of the design of the tank, all conclusions are made on the basis of a pair of images created unknown where and when, several years ago that appeared on the Web. And these estimates are more like speculation and speculation. The attacks against the fact that the "Armata" supposedly abandoned the visual optical observation channels are especially touching. What a nightmare! But in the same aviation conventional optics has long been no longer used in a variety of aircraft and helicopter systems. All this has been tested in a variety of military conflicts.

And imagine, works great. Moreover, the submariners have long abandoned periscopes with conventional optics, replacing them with non-penetrating optocoupler masts. And also everything works great.

After the demonstration of these models, it was long thought that this was the Armata tank.

The same goes for criticism of the crew’s placement in an isolated armored capsule. Say, it is impossible to create normal conditions for the crew there, it is impossible to provide good protection from the sides. But such an arrangement has been explored for more than a decade. Almost from the end of 50, they tried to create a tank with such a capsule in the USSR. However, due to the backwardness of electronics, this did not happen. Because of this, it was not possible to realize the bold intentions of the brilliant Soviet designer Alexander Alexandrovich Morozov, who in the 450 Facility in 70-s had placed the crew of the tank in the same way.

Former Russian Defense Minister Marshal Igor Sergeyev was just fascinated by the convenience of working conditions for tank crews when, at the beginning of 2000, he was first shown the "195 Object", on which, like at Armat, a capsule was mounted. This contrasted very sharply with what was on modern domestic machines. If we talk about protection, in terms of the development of armor steel, fillers, dynamic and active protection, domestic developments are at the most advanced level. All this will be used in the "Armata".

Ctrl Enter
Noticed oshЫbku Highlight text and press. Ctrl + Enter
We are
A great interview with Sergey Lavrov: about Ukraine, Obama and IranWhat you didn't want to know about England
52 comments
Information
Dear reader, to leave comments on the publication, you must to register.