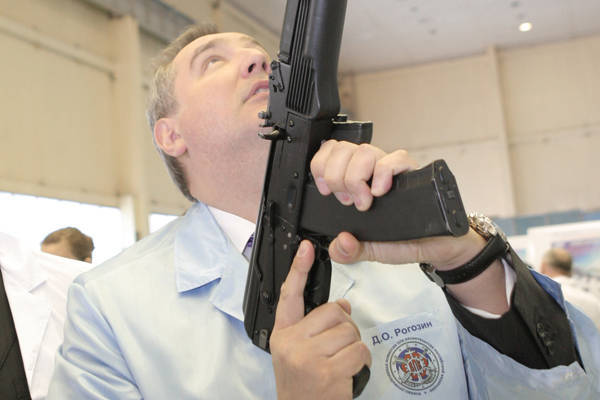 According to him, in order to understand what forces and means of warfare Russia needs, it is necessary to soberly assess the nature of the military threats to the country's security, albeit hypothetical. What war can we expect in the future? Who is he - this notorious "likely opponent"? This is what Rogozin answers to these questions.

Scenario 1: Contactless war with the enemy, who is at a higher technological level
We will be realistic - in the near future, Russia will hardly succeed in catching up and overtaking the leading powers in terms of the technological level of development. The Russian economy is 10 less than the US one. Yes, and the scientific potential was actually destroyed after the collapse of the USSR. Today, the lag in a number of critical basic technologies from the leading countries of the West is decades. What can we oppose to such a high-tech adversary? The answer seems obvious - the main guarantee of Russia's security is the forces of strategic nuclear deterrence. And Russia, according to military doctrine, is ready to use nuclear weaponincluding in repelling aggression using conventional means of destruction. But is it enough in today's realities only a nuclear shield?

For years, 10 in the United States has been working on the concept of a "lightning global strike." It provides for striking non-nuclear weapons on any part of the planet within one hour. In fact, American strategists had a vision of how to defeat another nuclear power with "little blood", while avoiding unacceptable damage from retaliatory actions.

At the end of 2012, the Pentagon conducted a computer game, the results of which showed that, as a result of striking a "large and highly developed country" with 3500-4000 units of precision weapons, its infrastructure would be almost completely destroyed during 6 hours, and the state would lose its ability to resist. Obviously, if such a blow is delivered to Russia, then the main objectives of the aggressor will be the forces of strategic nuclear deterrence. According to estimates in the United States, as a result of such a strike, 80-90% of our nuclear potential can be destroyed. At the same time losses among the civilian population will be minimal.

Western experts believe that although Russia will still have the opportunity to strike back a nuclear strike, the military-political leadership of our country is unlikely to do this: after all, the remaining funds, which in turn will attempt to intercept the global missile defense, we will no longer be able to deliver unacceptable damage to the enemy, but in the case of a nuclear strike will suffer enormous losses. Such an attack will be accompanied by a powerful outreach impact on the population of the victim country.

What can we do to counter this threat? This should be an asymmetrical response, using fundamentally new types of weapons. They should not rely on existing telecommunications systems that can be disabled in minutes. It should be an autonomous, self-sufficient weapon that can independently solve its tasks.

2 Scenario: Contact war with an adversary that is on a technological level equal to us
Since the collapse of the USSR, the strength of the Armed Forces has decreased by more than 4 times. Thousands of kilometers of the border remained uncovered. The leadership of the Russian Federation today is betting on the rapid reaction force, i.e. on the operational potential of the Airborne Forces and the mobility of the troops. As a result, we were able to quickly form powerful army groups of troops deployed from other regions of the country in a threatened direction. But will they be able to resist the enemy, who had previously created a numerical advantage in the conflict zone?

Today, there are alternative classical military theory views on ways to repel such a threat. According to him, such a war should be conducted nevertheless non-contact - with the help of weapons with a large radius of action.

3 Scenario: Local Wars
The largest local conflict of our time - the war in Afghanistan, has become a cold shower for the Soviet military leadership. One of the main reasons for the escalation of the conflict and its escalation into an exhausting guerrilla war was that the army did not have weapons that could inflict targeted, targeted influence on the enemy. The army, prepared for large-scale combat operations, was forced to work "over the areas" - using multiple launch rocket systems, heavy artillery, long-range aviation. All this led to high losses among the civilian population and the rapid growth of supporters of the armed opposition.

By the middle of the 80-ies, a paradoxical situation developed in Afghanistan: the most effective special forces were operating against the Mujahideen, using essentially the same tactics and the same armament as their opponent. There was only one difference - behind our troops was a huge country with a powerful military industrial complex and military science, which, as it turned out, could not foresee and adequately respond to the Afghan challenge. We encountered similar problems later in the North Caucasus.

In the course of reforming the army, the experience of its participation in local conflicts was taken into account. For example, light armored vehicles with enhanced mine protection, unmanned vehicles, etc., began to enter service. But the problem of the disproportionality of the force applied to the level of the tasks facing the army in local conflicts is still not resolved. Today, like 30 years ago, we have only those tools that, if applied, bring the conflict into a more difficult phase. We also need a weapon that will allow the soldier to be taken out of a direct clash, capable of hitting only those targets that really pose a danger to us.

The 4 Scenario: Countering Terrorism, Including State
The level of terrorist threat today is comparable to the military. In the hands of criminals are all new tools, which leads to the emergence of new threats. Terrorists are adopting information technology. The goals of cyber attacks can be both gaining access to state and personal secrets, as well as direct attacks to destroy the administrative elite and infrastructure of states.

At the same time, the fight against terrorism in Russia today basically comes down to operational-search measures, which are not always coordinated by the special services and the Ministry of Internal Affairs. Information technologies are used only as auxiliary mechanisms. Meanwhile, in a number of countries, highly intelligent information systems are being developed that can bring the effectiveness of countering terrorism to a qualitatively new level. In such systems, information flows from border crossings, transport, and outdoor video surveillance cameras will be integrated. But the developers of such systems face serious problems - the current level of computer technology does not yet allow processing such powerful information flows. The task can be solved by creating an extraordinary information system, the outlines of which are already being worked out in Russia.

5 Scenario: Arctic Contest
The active development of the Arctic shelf will inevitably lead to a conflict of interest between the countries making their claims to its resources. It is possible that the confrontation will go beyond the diplomatic. It is likely that Russian oil and gas production facilities may become targets for sabotage by competing countries. It should be understood that the perpetrators of such sabotage may not be clearly associated with the client countries. To strike back and determine the scale of the use of force, it is necessary not only to fix the executors, but also to identify their customers. This requires modern monitoring tools that can work effectively in air and water environments. In the meantime, we do not have such funds in full.

The revitalization of the Northern Sea Route will also not add calm to the Arctic. NATO has long been discussing plans to strengthen the naval grouping there under the pretext of protecting commercial shipping.

Ctrl Enter
Noticed a mistake Highlight text and press. Ctrl + Enter
We are
BEFORE. Rogozin: "To be strong: guarantees of national security"Military reform as an integral part of the security concept of the Russian Federation: Systematic dynamic assessment
132 comments
Information
Dear reader, to leave comments on the publication, you must to register.