The casket of misfortunes is open for two years 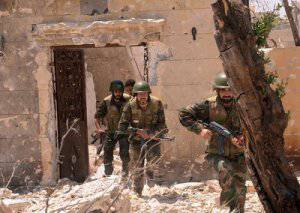 
Of course, data from Syrian immigrants who are closely connected with Western intelligence agencies should be treated with caution. Nevertheless, they give an idea of ​​the scale of the civil war that has befallen the Syrian people, into which extremist Islamic organizations sponsored by Qatar and Saudi Arabia and other countries have drawn it. And, unfortunately, we have to admit that these scales will only increase.

Thus, in a number of capitals, including Riyadh, according to the Russian Foreign Ministry, they are not shy about using the most dubious methods and connections, including financing and arming international terrorists and extremist groups, to realize their own geopolitical ambitions due to the blood and suffering of the Syrian people. .

Despite the country's constantly declared commitment by the country to a peaceful settlement of the Syrian conflict, the United States continues to expand its military assistance to the militants. According to the Wall Street Journal, the US Central Intelligence Agency began shipping to Jordan weaponswhich is planned to transfer to the Syrian rebels. According to US officials, it is planned that the weapon will be transferred to some groups of "moderate" militants within a month so that they can launch an offensive against the Syrian government forces in early August. At the same time, the United States will seek to supply weapons to the rebel groups by the Arab and European states.

"In accordance with the developed action plan, every month, starting in August, several hundred fighters will be sent to Syria," the Wall Street Journal said. According to her, “according to this development, according to US and Saudi officials, it would take from 4 to 5 months to ensure that sufficiently well-armed and trained moderate fighters could really resist the forces of Assad and his allies from the Hezbollah group. At the same time, the American authorities, despite the warnings of a number of sensible politicians, actually ignore that modern weapons may ultimately be at the disposal of extremist groups such as Djebhat al-Nusra and Iraqi Al-Qaida.

In turn, the Palestinian newspaper Al-Quds, referring to reliable sources, argues that the Americans formed an elite unit (3-4 thousands of people) from the Free Syrian Army, whose fighters are equipped and armed according to the standards of the US armed forces military training in a camp in the area of ​​the Syrian-Turkish border. According to these reports, the United States hopes to create in Syria a reliable opposition stronghold, similar to Benghazi in Libya during the uprising against the regime of Muammar Gaddafi. An additional goal is that such a unit can serve as a counterweight to Islamist groups that have recently gained strength in the ranks of the Syrian opposition.

The United States is able to introduce a no-fly zone over Syria, but it will be an act of declaring war, Admiral Martin Dempsey said in Washington, DC, the Joint Chiefs of Staff (CGS) of the armed forces. “If we make a choice in favor of introducing a no-fly zone, it will be essentially an act of declaring war. I would like to understand the plan to achieve peace before we start a war, ”he said. At the same time, the admiral stressed that "if the state decides that we want to establish a no-fly zone, we will do it", but it "will be difficult, since Syria has a modern and dense air defense system."

Foreign media have already repeatedly reported that the OKNSH has developed plans for the possible creation of a no-fly zone using the regions of Turkey and Jordan bordering Syria, where the Patriot 8 batteries have been deployed in total. It is also known that the head of the Pentagon, Chuck Hagel, approved the request of the Jordanian authorities to deploy an F-16 fighter squadron on the territory of this country.

It is thanks to foreign military aid that the militants continue to put up fierce resistance to the government forces. So, in Aleppo, they still control at least half of the city districts and do not stop trying to expand the occupied territory. The outcome of the battles in this province, military experts do not undertake to predict, since groups of oppositionists and foreign instructors continue to penetrate here from the Turkish territory, deliveries of weapons promised by Obama began.

Gangs have intensified in the province of Idlib, where they have already besieged the provincial center for several days, depriving it of electricity and the supply of food. The difficult situation persists in the eastern provinces of Raqqah and Deir ez-Zor. Gangs blocked the military garrisons where units of the 17 Mechanized Division are stationed and subject them to constant shelling.

But near Homs, the regular army liberated the city of Karyatein. Troops are also drawn to Rastan, Tablis, Al-Khoule - the three main rebel strongholds in central Syria. At the same time, the moral fatigue of that part of them, which has been directly involved in combat operations against gangs for two years, is beginning to affect the actions of government troops. This is first of all special forces regiments, 4th tank Division and Division of the Republican Guard.

The Syrian army is also experiencing difficulties in the field of logistics, especially the Air Force and the Army aviation. For a long time, Syria, for financial reasons, did not update its fleet, now it is difficult to do this because of the unwillingness of foreign states to sell military aircraft and helicopters to it.

The runaway Syrian Air Force Colonel Ziyad Tlass, the nephew of Syria’s former defense minister, Mustafa Tlass, told Al-Quds al-Arabia the other day that before the outbreak of the civil war, the Syrian air forces had 350 aircraft and helicopters, but during two years of conflict most of the vehicles were out of order or were destroyed. Today, Tlass argued, no more than 90 combat aircraft and helicopters were left at the disposal of the Syrian army. Their main locations are four airfields: the airport near Damascus (in the south-eastern suburbs of the capital), Dumeyr air base to the northeast of Damascus, Shairat air base (southeast of Homs) and Tiyas air base (on the way between Homs and Tadmura).

According to Tlass, before the war, Syria’s officer corps numbered 36 thousand people, 28 thousand of whom belonged to the Alawite. In the security forces, the Alawites made up 75 percent personnel. They laid down the brunt of military tests. According to analysts, the Alawite community, which also owns the president of Syria, remains the most reliable pillar of the current regime (more than 70 percent of the population are Sunni Muslims, 10 percent are Christians, the rest are Shiite Muslims and Alawites).