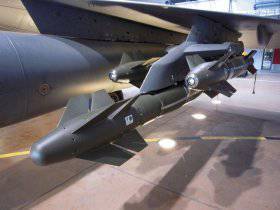 French Air Force applied new precision in Mali weapon - aviation 250 kg bombs equipped with the AASM (Armement Air-Sol Modulaire, Air-to-Ground Modular Weapon) Hammer SBU-64 with a laser homing head (GOS). The bombing was carried out from the Rafal fighter, which, in addition to the bombing, had an on-board laser target designator on the underwing pylon. The accuracy of the new weapons was about one meter. This was reported to the ARMS-TASS correspondent on the eve of the opening of the 50th Paris International Aviation and Space Salon by the official representative of the Sazhem development company (Safran group) Philippe Vodka-Galen.


According to him, at the salon, the Sazhem company will present in its exposition the entire family of Hummer weapons: guided bombs with an inertial navigation system, corrected by signals from the global satellite navigation system (INS with GNSS); guided bombs with INS, GNSS and infrared GOS; guided aerial bombs with ANNs, GSNS and laser hsn. All three versions of this family of precision weapons are adopted by the French Air Force and can be used with the Rafale and Mirage-2000 fighters.

The French Air Force tried to test the new weapons of the Soot company in various tactical scenarios not only at the test sites, but also in combat conditions.

The first two versions of the aerial bombs were used in Afghanistan and Libya, and the third in Mali. In particular, in 2011 in Libya, during the operation "Harmatan", the French air force used over 1600 aviation weapons, including aerial bombs and guided missiles. Among them was the 225 AASM bombs dropped from the Rafale aircraft.

At the salon in Le Bourget, all three versions of high-precision weapons will be demonstrated not only at the Sazhem stand, but also at the exposition of the Rafale fighter developer — Dassault Aviation Company, as well as in the French Defense Ministry pavilion next to the multi-role fighter Rafale.