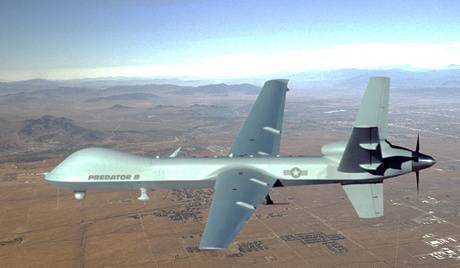 The US has produced a new generation of flying combat robots with weaponscapable of independent action. France buys American UAVs. Brigadier General of the French Air Force Jean-Vansen Brisset told the Voice of Russia about the advantages of the new drones and explained for what purposes his country is going to use them.


France decided to purchase unmanned aerial vehicles from the Predator family (Predator) from the Americans. With the creation of a new generation of drone type UAVs, the Americans opened a new era. These aircraft are able to remain in the air indefinitely for a long time, carrying out refueling at stratospheric altitudes. The absence of a person in the cabin also allows such aerobatic maneuvers with supercritical angles of attack that are simply inaccessible to a creature of flesh and blood. The speed of decision making also increases, since, if the device is working offline, the transition to action takes place in seconds after the detection and identification of the target.

True, Pakistan mourns the numerous victims of combat winged robots, who, instead of destroying the columns of terrorists, dispassionately shot peaceful dekhan.

On the other hand, the autonomous mode allows you not to lose valuable equipment, as in the case of loss of control by the operator, the UAV is not only able to continue working on targets or aerial photography, but also to return home independently. The new generation of American drone has an unsurpassed 12 range of thousands of kilometers.

It seems that today France has decided to pay very close attention to the production of UAVs, as it used to lag significantly behind in this area.

French Air Force Brigadier General, Jean-Vincent Brisset, employee of the Institute of International and Strategic Problems of the General Staff of France. In the past, a military pilot himself and a graduate of the French Top Gan, he is exclusively engaged in military aviation. Here is what he said to the Voice of Russia:

“The drones that we decided to buy from the Americans are not combat vehicles, but apparatuses intended for the needs of military intelligence. They are able to fly at medium altitude, remaining as long as possible in the air (minimum 36 hours), but no weapons are installed on their platform. France has never had a UAV before. At the moment we are going to set up their release together with the British and Germans.

- In the area of ​​possible joint production of UAVs, France is in contact with the IAI Israeli aircraft builder. What are your thoughts on the new American generation of FX series drones? These devices have an extremely wide radius of action, reaching 12 thousands of km, and they carry weapons on board.

- In the field of cooperation with IAI, dots over i have been put for a long time: after all, Dassault, which produces the French Mirages and Rafali, was about to consider the joint French-Israeli production of the Heron UAV, which in some ways compete with USA. But our prototype was less powerful and a bit obsolete. Well, and besides, we were not yet ready for serial production, while today we are in dire need of such a technique.

As far as the American FX series is concerned ... Yes, this is our future in order to be able to act in any country in the world very quickly and over long distances. The French army has no such machines yet.

France clearly needs a UAV to monitor the deserted spaces in North Africa, and it is possible that specifically in Mali. And to put or not to put a combat suspension on the wing is often decided by one mechanic for one hour.

Ctrl Enter
Noticed a mistake Highlight text and press. Ctrl + Enter
We are
The next wave: race to the wars of robotsPredator project news
25 comments
Information
Dear reader, to leave comments on the publication, you must to register.