Neither the number nor the skill. The Uzbek army is not a modern military force.

23 May 2013
41
The armed forces of Uzbekistan emerged at the end of 1991, after the collapse of the USSR. Supreme Commander is President Islam Karimov. The army is led by the Ministry of Defense. In 2000, in the course of reforming the armed forces of the Republic of Uzbekistan, the Joint Headquarters of the Armed Forces was formed on the basis of the General Staff - a single command body for the development and implementation of decisions in the field of armed protection of the sovereignty and territorial integrity of the country.


The total strength of the armed forces is 68 thousand, of which 45 thousand is in land forces. Also in the Armed Forces include air force and air defense troops, special forces and the National Guard.

The armed forces of Uzbekistan are recruited by conscription and on a voluntary basis. The draft age is 18 years. The service life is one year for those with secondary education and nine months for people with higher education. The goal is the creation of a professional army, formed by volunteer contractors. Currently, the number of volunteers seeking to serve in the armed forces is much higher than the number of vacancies, so contract soldiers are selected on a competitive basis. This is due to the high level of unemployment in Uzbekistan, a significant part of the population of which leaves in search of work in neighboring countries. 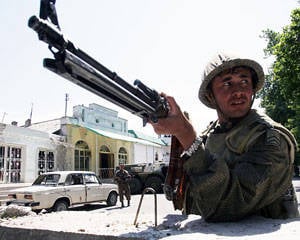 The weak point remains the low level of salaries for military personnel. For most, it does not exceed 100 dollars per month. A large part of the ethnic Uzbeks officers in the 90-s preferred to serve in the Russian army, where the salary is much higher. At the same time, the level of education and combat training of military personnel in Uzbekistan is considered the highest in Central Asia. The country's armed forces are superior in this respect to the armed forces of Kazakhstan, Turkmenistan, Kyrgyzstan and Tajikistan. Corruption and theft of military property are widespread in the Uzbek army. The command staff, according to Uzbek sources, is more than 90 percent ethnic Uzbeks.

Military spending - 3,5 percent of GDP. In terms of currency exchange rates, in 2012, 1,8 was a billion dollars, and in terms of purchasing power parity, 3,6 billion.

The military doctrine of Uzbekistan, adopted in 1995 and subjected to some changes in 2000, proclaims: “The Republic of Uzbekistan will not use its armed forces against another state, except in cases of repelling an attack on the Republic of Uzbekistan or other states related to Uzbekistan military assistance; no one in the world is threatened and does not consider anyone as an adversary and has neither territorial nor other claims to any of them and is ready to build relations with all countries on the basis of international law, mutual consideration of security interests; adheres to the non-nuclear principles: not to place, not to produce and not to acquire nuclear weapons».

The military doctrine of Uzbekistan pays special attention to the security of the Central Asian region. It stresses the following: “Currently, between many countries of this region there are essentially no borders in their classical sense. In such circumstances, the conflict that has arisen in any of these countries threatens to cover the entire region.

With the negative development of the military-political situation in the world, and above all in the Central Asian region, the Republic of Uzbekistan may actually face the question of ensuring its own security. ”

The military doctrine considers potential threats: “A high level of concentration of armed groups in various regions of the world; unrelenting tensions of the political situation in the world; the commitment of individual states or blocks of states to conduct their policies from a position of strength; the desire of some states to build up armed groups near the borders of other states; instability of the political situation in neighboring countries and the possibility of its escalation; actions of some states to strengthen their influence on the situation in the countries of the Central Asian region; terrorist acts carried out in the region by extremist political organizations, illegal military formations, as well as their activities aimed at inciting nationalist sentiments and religious intolerance. ”

The military doctrine of Uzbekistan states: “The main military-strategic objectives of the Republic of Uzbekistan are: in peacetime, to maintain the state’s defense capability at the level of necessary sufficiency, guaranteeing the territorial integrity of the republic, suppressing possible provocations and attacks on its sovereignty, ensuring its armed forces to be constantly aggression both independently and in cooperation with the armed forces of the States parties to the Collective real security; in the event of war, guaranteed repulse of aggression, inflicting a decisive defeat on the aggressor both on its own and with the military potential of other states associated with the Republic of Uzbekistan by the relevant treaties. ”

At the same time, the maintenance of the combat potential of peacetime groupings at a level that provides a reflection of the aggression of a local (regional) scale is of paramount importance in the construction of the armed forces.

Regarding cooperation, the Military Doctrine proposes strengthening relations with the United States of America, the European Union, Japan, China, the Commonwealth of Independent States and NATO. Uzbekistan hopes to acquire on the cheap part of the weapons and military equipment after the evacuation of the Allied forces from Afghanistan.

15 May 1992 Uzbekistan signed the Collective Security Treaty, which entered into force in 1994, but in 1999 refused to renew it for another five-year term. However, 16 on August 2006 of the year in Sochi made a decision on the full accession (restoration of membership) of Uzbekistan to the Collective Security Treaty Organization (CSTO). 14 June 2009 Uzbekistan refused to sign an agreement on the creation of a Collective Rapid Reaction Force, 28 June 2012 Tashkent sent a note informing about the suspension of its country’s membership in the CSTO, and 19 December 2012 officially suspended its membership in the CSTO. From this moment Uzbekistan is a neutral state. At the end of August, 2012 adopted the law “On Approval of the Concept of the Foreign Policy Activity of the Republic of Uzbekistan”, which enshrines the impossibility of the state joining any military-political blocs. In addition, it is forbidden to deploy foreign military bases in the country.

Currently, there is one Uzbek military observer in the OSCE mission in Kosovo, and 163 German troops and several C-160 aircraft are deployed in Uzbekistan to support the NATO operation in Afghanistan.

Uzbek ground forces number up to 45 thousand people. Consist of one tank, 11 motorized, one light mountain, one airborne, three air assault and four engineering brigades, as well as six artillery and one missile brigade. They are divided into four special military districts and one command:

Ctrl Enter
Noticed a mistake Highlight text and press. Ctrl + Enter
We are
Military reform as an integral part of the security concept of the Russian Federation: Systematic dynamic assessmentThe sleeping giant of Central Asia
41 comment
Information
Dear reader, to leave comments on the publication, you must to register.