"Tunguska-M" and its marine counterpart "Dirk"

20 May 2013
31
Operation in the military, as well as the combat use of the ZSU-23-4 Shilka proved that this complex is able to wage an effective fight not only with low-flying air targets (especially in a difficult jamming environment), but also against a ground enemy. Despite this, “Shilka” had a small effective zone of destruction of targets, as well as a low damaging effect of ammunition. Also, this complex did not provide timely shelling of air targets, especially when conducting reconnaissance in autonomous mode. As a result, the military demanded that the industry develop a new anti-aircraft self-propelled unit, which was the Tunguska.


They decided to fix the low damaging effect of ammunition and a small effective zone of destruction by increasing the caliber of automatic cannons to 30 mm. We stopped at this option, since a further increase in the caliber of shells did not provide technical capabilities to maintain a high rate of fire. Complex "Tunguska" is designed to provide air defense units tank and motorized rifle troops from attacks by army and tactical aviation, fire support helicopters, UAVs, as well as for the destruction of ground lightly armored targets and manpower of the enemy.

The combat capabilities of the complex make it possible to solve the tasks of directly covering the troops and individual objects in a defensive and offensive battle, during a march and when positioned on the spot from the strikes of enemy air attack systems from extremely small, small, and partially medium heights. The complex is able to confidently solve combat missions in any climatic conditions. The structure of the air defense system "Tunguska-M" includes a combat vehicle - 2С6, a charging vehicle, an automated test and testing station, as well as maintenance and repair facilities. 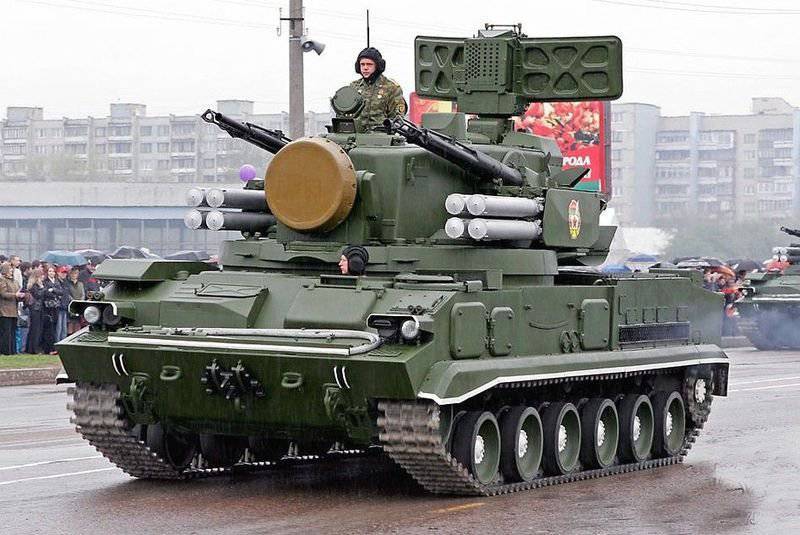 The GM-352 tracked chassis, unified with the Tor system, was chosen as a self-propelled base for the new complex. This chassis has an adjustable ground clearance and provides maximum speed on the highway - 65 km / h. The use of a hydropneumatic suspension and a hydromechanical transmission provides the Tunguska with good maneuverability, high throughput and, most importantly, smoothness.

The Tunguska anti-aircraft gun and missile system (ZPRK) has become the 1-m in the world a unique multi-purpose dual-purpose anti-aircraft complex. It was created on 8 years before the foreign multipurpose complex “Adats”. Compared to other short-range air defense complexes (both foreign and domestic production), it most meets the “cost-effectiveness” criterion.

The basic one weapons complex is the rocket 9М311. This bikalibernaya two-stage solid propellant rocket is made according to the aerodynamic configuration "duck". The missile is equipped with a fragmentation-rod warhead and contact and non-contact fuses. Zour has a very high maneuverability (withstands overload up to 18g), which allows you to destroy maneuverable and speed targets. Aiming anti-aircraft missiles at the target - radio command. The rocket is delivered to the troops in a special transport and launch container (TLC) in the equipped state and does not require any maintenance during 10 years. The ammunition of missiles is replenished with the help of a transport-loading vehicle. TPK has a low weight - up to 55 kg, which allows you to charge the missiles on PU manually. 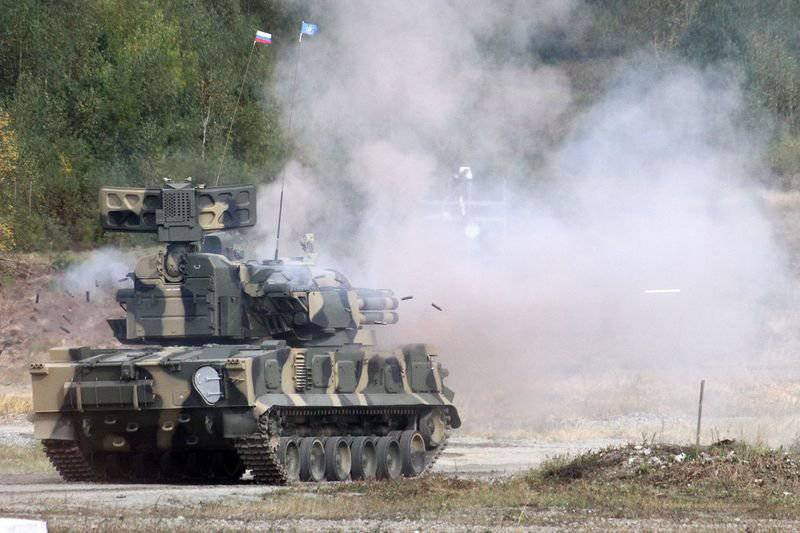 The Tungusk-M ZPRK tower installation houses information optoelectronic and radar facilities, a digital computing system, control panels for members of the crew, and communication facilities. To protect the crew, the Tunguska is equipped with special means of protection against weapons of mass destruction and the creation of normal environmental conditions inside the installation.

The artillery armament of the complex is represented by two double-barreled anti-aircraft guns 2А38М working in conjunction with the SLA. The double-barreled automatic weapon scheme allows firing in intensive mode with a rate of fire of up to 5000 rounds / min. Power guns - tape. Cartridge tape guns equipped with 30-mm standardized ammunition with a special padded machine.

By the middle of the 1990-ies ZPRK "Tunguska" was upgraded, the new complex received the designation "Tunguska-M". The main change was the introduction into the complex of new radio stations and a receiver for communication with the battery commander center "Ranzhir" and the commander point PPRU-1М. In addition, the gas turbine engine was replaced on the machine, the new engine received an increased service life (right 2 times - from 300 to 600 hours).

The following modification of the complex received the designation "Tunguska-M1", and was put into service in the 2003 year. In this modification, the processes of targeting anti-aircraft missiles and exchanging information with the rangir battery commander's station were automated. In the 9М311М rocket itself, the laser proximity sensor of the target gave way to the radar one, which increased the likelihood of the destruction of the ALCM type missiles. Instead of a tracer a flash lamp was mounted. The range of destruction Zour increased to 10 km. In general, the level of combat effectiveness of the Tunguska-M1 RMS in the conditions of interference increased 1,3-1,5 times as compared with its predecessor. 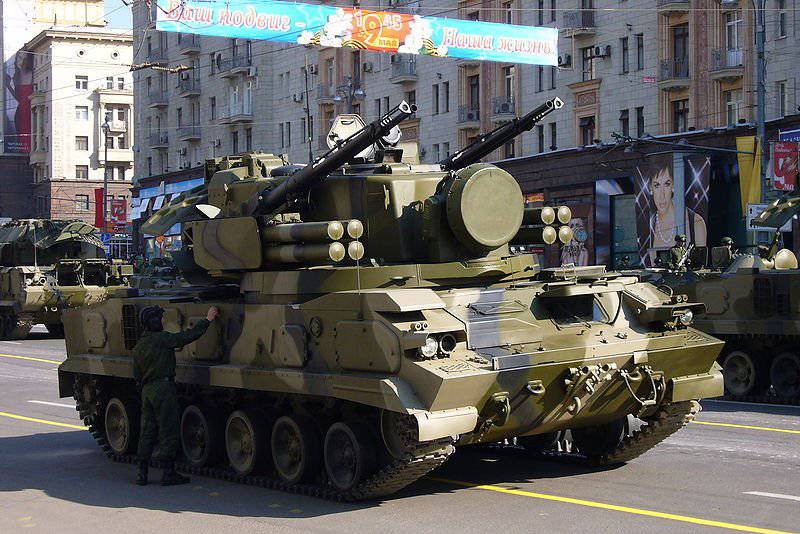 The Dagger 3М87 (“Chestnut” export designation) is a universal all-weather shipborne short-range anti-aircraft missile and artillery complex, the main purpose of which is self-defense of surface ships and auxiliary ships from strikes of various air targets from small and extremely small heights. According to the presence of artillery and missile weapons, united by a common fire control system, this complex has no world analogues. The complex was created on the basis of the land development "Tunguska-M".

A feature of this complex is the use of 2-x types of weapons, which provide consistent firing of air targets with rockets, as well as artillery fire at a distance of 8000-1500 meters and 1500-500 meters from the ship, respectively. The total combat potential of this complex in 2-4 times exceeds the usual anti-aircraft artillery complex. With the advent of new promising goals, this difference will only grow. 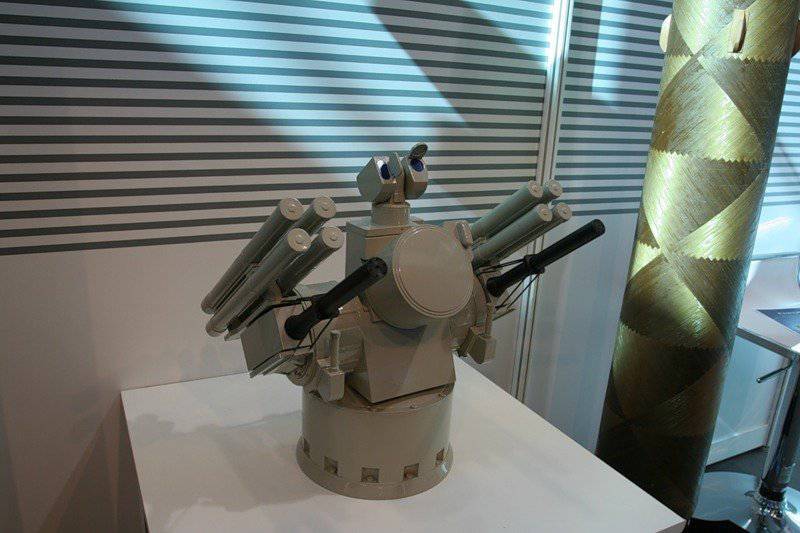 The modular construction of this complex allows it to be mounted on ships of different displacements (from small rocket boats to aircraft carriers), as well as ground targets. In conjunction with the use of an integrated control system, PSRA guarantees high combat survivability. DIRECT "Dirk" can equally well be used to defeat air, surface and ground targets. The rocket-cannon armament used on the complex is distinguished by high accuracy, which is due to its compact location in a single tower installation, as well as the presence of a modern SLA, television-optical and radar guidance channels with high accuracy characteristics.

Joint processing of signals from target tracking channels and missiles, as well as automatic selection of the optimum combat mode of operation, provide the SIGNATURE very high noise immunity in the conditions of the use of various kinds of radio-electronic interference by the enemy. The complex possesses full automation of combat work, which allows it to fire simultaneously at 6 targets per minute and provides the ship with a high degree of protection against attacks of high-precision weapons (anti-ship missiles, controlled bombs, etc.), as well as low-flying small-sized targets. In terms of its combat effectiveness, the Dirk "Dirk" in 1,5-2 times exceeds the foreign complex "Crotal-Naval" and in 2,5-4 times the "Goalkeeper".

The Dirk "Dirk" consists of combat and command modules, 30-mm shots, missiles with storage and reloading systems, coastal maintenance tools, as well as training and training facilities. The SARK command module, equipped with a three-coordinate radar and an information processing system, is used to detect various kinds of targets, as well as their distribution, with the output of target designation data to combat modules. 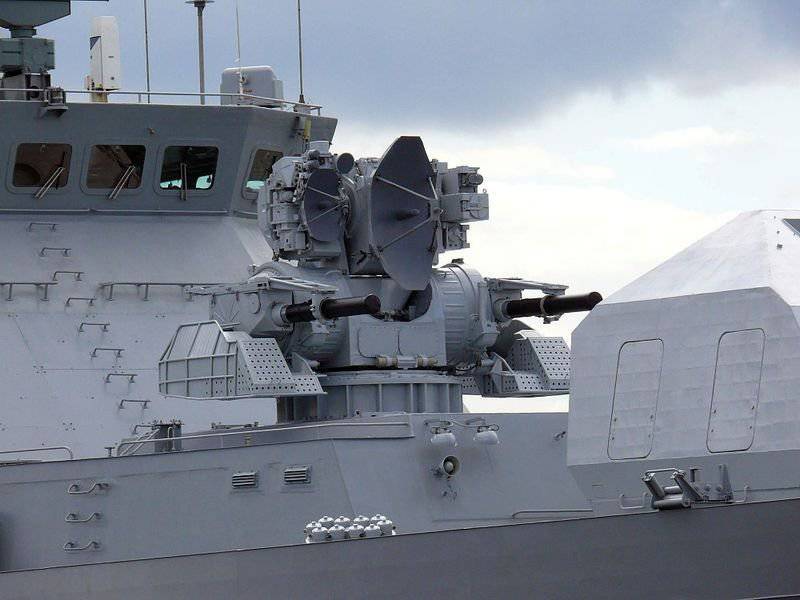 Combat module 3М87 (includes 2 six-barreled 30-mm anti-aircraft guns, as well as SAM 9М311-1 in transport-launch containers, FCS with television optical and radar channels). The artifacts of the complex provide the rate of fire up to 10 000 shots per minute. One such module can simultaneously fire up to 3-4 targets and provide protection to a small ship against enemy air attacks with a low density of air attack weapons in a raid. On ships of large displacement, 2 and more modules of Dirk Dirk can be installed to repel high-intensity strikes from each side. Their number, along with the displacement of the vessel, is also determined by the capabilities of the control system and can reach up to 6 units (on the Peter the Great TARKR, the 6 MORTG “Dirk” is used). The combat module, at the request of the customer, can only be performed in an artillery version.

The fire control system provides the complex with the acquisition of target designation data by the combat module, the generation of data for aiming the weapon at the fired targets, and automatic tracking of targets. The radar channel of the complex operates in the millimeter wavelength range, and also has a narrow radiation pattern, which ensures a sufficiently high accuracy (2-3 m) of targeting missiles to low-flying anti-ship missiles without restrictions on their flight height. When using a television-optical channel with a correlation-contrast method of signal processing and with an automatic target tracking device, it is possible to target anti-aircraft missiles at a target with an accuracy of an 1 meter at any target altitude.

The complex uses Zur 9М311. This is a solid two-stage rocket, which is designed according to a bicalyber scheme with a detachable engine. The rocket is designed to destroy helicopters, airplanes and cruise missiles in terms of their optical visibility in the spatial sector 350 meters wide (right and left) from the combat module at a distance of kilometers to 8-10. In flight, the rocket is controlled by a radio command guidance system in semi-automatic mode with automatic launch of the rocket to the line of sight or with manual tracking of the target. The average speed of the missiles reaches 650 m / s, while the anti-aircraft missile can maneuver with overloads up to 18g. 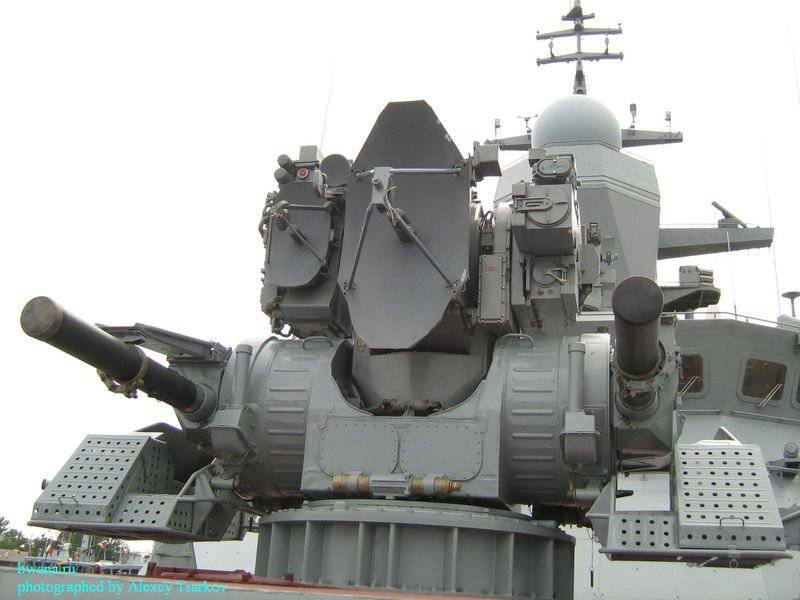 At present, the 9М311 rocket is the only Russian development that is equipped with a fragmentation warhead, non-contact (laser) and contact fuses. Non-contact fuse cocked at a distance of 1 km. from the target and provides a reliable undermining of the warhead warhead during its flight at a distance of up to 5 meters from the target. When firing at surface or ground targets, the proximity fuse switches off. To increase the effectiveness of air targets, rods (up to 600 mm in length and 4-9 mm in diameter) are covered with a special “shirt” on top, which contains ready-made attack elements made in the form of cubes (2-3 gr. Each). At the time of the detonation of a missile defense unit of fragments and rods, a kind of ring with a radius of up to 5 meters is formed in a plane that is perpendicular to the rocket axis. At a distance of more than 5 meters, their action is ineffective.

The missiles of the Kortik complex are placed in the TPC, which is unified with the missile defense system of the Tunguska-M air defense complex. The rockets are assembled in the 2 block of 4 missiles in each. They are mounted on the turning part of the combat module of the complex. The ammunition of each module consists of 8 missiles. At the same time, the reloading and storage system provides storage of 32 missiles in containers, their storage in the cellar, as well as lifting of the missiles and loading the launcher.

Ctrl Enter
Noticed a mistake Highlight text and press. Ctrl + Enter
We are
The famous "Three-inch"Fire bank
31 comment
Information
Dear reader, to leave comments on the publication, you must to register.