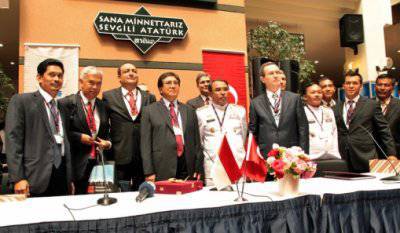 In an interview with Golos Rossii, former military pilot Mesut Hakky Chashin expressed his opinion on the models of the Russian defense industry and the prospects for Russian-Turkish military technical cooperation.


Turkey is ready to expand cooperation with Russia in the military-technical sphere. This was stated by the Minister of National Defense of the Republic Ismet Yilmaz in Istanbul, where the international exhibition of the defense industry "DEF-2013" is held. More than 50 states take part in the exhibition. Rosoboronexport and Rostec State Corporation are participating from the Russian side.

On the sidelines of the exhibition is a discussion of the creation of a joint Russian-Turkish anti-aircraft missile system. One of the visitors of IDEF-2013, a former military pilot and now a professor in the department of international relations of the Air Force Academy and Yedipee University (Turkey), Doctor of Political Sciences Mesut, shared his opinion on this issue and on the exhibition itself with the Voice of Russia. Hakky Chashin:

-What caught your attention at the exhibition "IDEF-2013"?

- In 2013, there are a lot of participants and visitors, much more than in previous events. Both NATO countries and countries such as Russia and China take part in the exhibition. There is a lot of competition between countries. Each company presents its latest technology, its latest weapon. Of particular interest are developments in the field of aviationspace exploration and shipbuilding. The atmosphere of a truly international competitive market reigns at the exhibition.

- Expert: "Russian air defense systems in Turkey will strengthen the security of the region"

- In the press in recent days, they are actively discussing the prospects for Russian-Turkish military-technical cooperation. Particularly noteworthy are the discussions on the creation of a joint anti-aircraft missile system in the framework of the T-LORAMIDS program. How realistic are these ideas?

- Russia in the framework of the tender for the purchase of air defense systems, conducted by Turkey, offers high-tech installations that have been carefully selected. These are the C-300 anti-aircraft missile systems. Russian-Turkish cooperation in joint development of air defense systems is a fairly promising direction, since Russia is a country that is capable of establishing partnerships with various countries, alliances, including NATO.

Russian anti-aircraft missile systems are already being used by Greece. This suggests that Russian air defense systems can be integrated with NATO weapons. From the point of view of Turkish interests, I see one of the advantages of the expansion of Turkish-Russian cooperation in the perspective of the joint assembly of anti-aircraft missile systems.

An important feature of Russian air defense systems is that, on the one hand, they can be integrated with short-range missile launchers. On the other hand, with the C-400 anti-aircraft missile systems installed in Moscow and Kaliningrad. During my recent stay in Moscow, I was shown these systems and told about the mechanism of their work and their advantages. All these advantages along with the mobility of Russian developments make them practically out of competition. However, the final decision for our prime minister. I think that after his visit to the US, which will take place on 16 in May, the situation will become clearer.

In addition to cooperation in creating joint air defense systems, Moscow and Ankara can also cooperate in the development of technologies and the training of military personnel of the Air Force and Navy. Russia has demonstrated its leading position in shipbuilding. I was very interested in the Bora missile hovercraft. At the exhibition I met many of my colleagues, acquaintances and friends. All of them, as well as the Turkish public opinion, are deeply interested in cooperation with Russia, in the acquisition of Russian weapons and in joint developments in the field of military-technical cooperation.

Russian-Turkish cooperation can actively develop in the space sphere. For example, Ankara is interested in partnership with Moscow in the creation of a satellite navigation system and satellite intelligence. Also, in my opinion, the atmosphere of cooperation that prevails between the Black Sea fleets our countries in the framework of "BLEXIFOR" should be in the Mediterranean Sea.

- What is the starting point for achieving these goals?

- Russia is one of the leaders in the field of space development. Another direction is the electronic card system. It is known that Russian electronic systems are capable of neutralizing the most advanced drones. It would be useful to equip such aircraft Turkish reconnaissance aircraft. In addition, Turkey is interested in acquiring the Yak-130 aircraft, which can fly in virtually all modes. I would like these aircraft to be assembled jointly.

Turkey is also interested in Russian search and rescue helicopters, as well as in ambulance and fire fighting helicopters. They have proven themselves in Turkish airspace. For example, "Mi-8" are actively used by our gendarmerie.

I would like our countries, taking full advantage of the provisions of the intergovernmental agreement on cooperation in the military field and the training of military personnel from 2002, to strengthen bilateral cooperation in the field of military education. Let Russian officers come to study at Turkish military colleges, and Turkish officers go to Russia.

I raised this topic during my meeting with the Russian military attache and at a reception at the Consulate General of the Russian Federation in Istanbul. Such an exchange of students will allow our officers to receive education in Moscow universities, which are considered among the most elite in the world. We are no longer enemies. Strengthening military cooperation with Russia - with a country that makes a significant contribution to preserving peace and stability throughout the world, in the interests and for the benefit of Turkey.

Ctrl Enter
Noticed a mistake Highlight text and press. Ctrl + Enter
We are
Esen Topoev: "We are accustomed to fierce competition and keen political overtones"Nikolay Silaev, Andrei Sushentsov: Georgia after the elections and prospects for Russian-Georgian relations
98 comments
Information
Dear reader, to leave comments on the publication, you must to register.