Russians do not surrender: fight in Pakistan 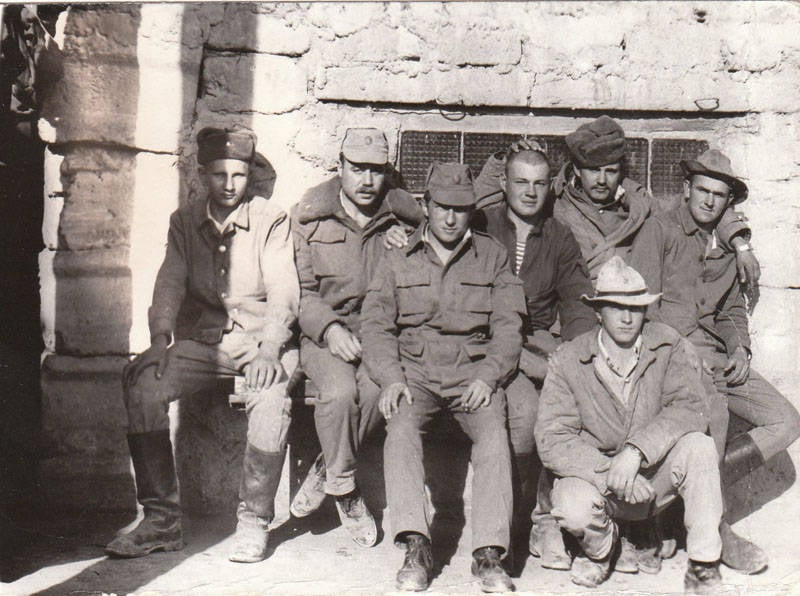 28 has passed since the day of this uprising. 26 April 1985, twelve emaciated, but not broken, Soviet soldiers began a battle against a hundredfold superior enemy forces — regular units of the Pakistani army, hundreds of Afghan dushmans and their American instructors, led by future Afghan President Barhanuddin Rabbani ...


"... At 21.00, when the entire staff of the school was lined up on the parade ground to perform namaz, the former Soviet soldiers removed sentries from the warehouses of the artillery and on the tower, freed all prisoners, armed themselves with small arms, artillery, captured in warehouses weapons and took positions with the aim of destroying cadets, teachers, and guard units ”(from the report of the 206 agent to the Shire Intelligence Center of the MGB of Afghanistan).

This happened in the town of Badaber, 24 kilometers from Peshawar - the second largest city in Pakistan. Here, under the guise of a refugee camp, was the training and terrorist center of the Islamic Society of Afghanistan (IRA). The general patronage over the center was carried out by the leader of the IOA B. Rabbani, the leader was field commander Gulbuddin Hekmatyar.

The center occupied an area of ​​500 ha. The term of training of cadets was 6 months. The faculty was staffed by Egyptians and Pakistanis - 65 instructors in total. The head of the center is Major of the Armed Forces of Pakistan Kudratulla. When it 6 advisers from the United States. Senior - someone Varsan. After completing their studies, the cadets were sent to the territory of Afghanistan by the leaders of the IRA of the provincial, district and volost divisions of the provinces of Nangarhar, Paktia and Kandahar.

The center housed 6 ammunition depots and 3 underground prisons, where Soviet and Afghan prisoners of war were detained. The mode of content is very strict, isolated. In the underground prisons were “incorrigible shuravi” - captured in battle, resisting, not converted to Islam. They began to be brought here in 1983-84, shortly before the events described. Before that, they were mainly kept in special pits-zindans, using them for the most difficult jobs - in the quarries, loading and unloading ammunition. For the slightest offense, and often without such, they were severely beaten.

Prisoners of underground prisons were nameless. Instead of surnames and names - Muslim nicknames. The obstinate and recalcitrant were branded after the example of the fascist executioners. Starved, giving a day a sip of water and scanty salty food in which “char” and “nasvay” - the cheapest drugs - were sprinkled. They were held with shackled shackles, from which not only skin, but also bones, festered on his hands and feet.

The “masters of that world,” as their foreign advisers called the guards, also invented more sophisticated torture. Especially they took care that a person “breathed the smell of death” from the first hour of bondage. With especially obstinate, skin was torn off, ears and tongues were cut off, chained to decaying corpses, every day they were stitched with iron rods ... During the captivity, Soviet soldiers turned into walking skeletons. And, in spite of everything, they rebelled.

According to the memoirs of Rabbani, an uprising began tall guy, who managed to disarm the guard who brought the evening soup. He opened the camera and let the freedom of other prisoners. Spooks and their instructors come to their senses only when all the weapons-prison area was in the hands of the rebels. The alarm was raised by all the inhabitants of the camp. Urgent began blocking zone warehouses. Were caused by the aid of the Pakistani army.

The most severe clash lasted all night. After a series of unsuccessful attacks, already deep in the night, Rabbani personally appealed to the rebels to surrender to the proposal. They replied with a categorical refusal and demanded to call representatives of the UN, the Red Cross or the Afghan and Soviet embassies in Islamabad.

Rabbani promised to think, knowing full well: to fulfill the requirement is to make public the fact of secret detention in the prisoners who declared themselves to neutral Pakistan, which is a gross violation of the elementary norms of international law. The Mujahideen and Pakistani troops were ordered to do away with the adamant "shuravi" in any way.

Followed by further assaults. And offers to surrender. The answer was always the same. Sturm followed the storm, the rebel forces melted away, however, and the enemy was carrying sensory loss. It is not known how much this fight lasted a handful of doomed people with superior tens, hundreds of times forces. Certainly to the last bullet, to the last man - they did not expect mercy from the butchers ...

Desperate to quell the rebellion, the command of the armed forces of Pakistan has decided: to shoot the rebels of multiple rocket launchers and heavy artillery mounted on the direct fire. In the morning 8 27 April Rabbani personally took command of the operation. At the same time the artillery was struck airstrike.

"The area of ​​the uprising was blocked by mujahideen troops, tank and artillery units of the 11th Army Corps of the Pakistan Armed Forces. The Grad MLRS and the Pakistan Air Force helicopter link were used against the rebels. 40th Army intelligence reconnaissance recorded a radio interception between their crews and aviation base, as well as the report of one of the crews about the bombing of the camp. Only through the joint efforts of the Mujahideen and Pakistani regular forces was it possible to crush this uprising. Most of the rebels died the death of the brave in an unequal battle, and the seriously wounded were finished off on the spot. "

According to one of the versions, the rebels, realizing the hopelessness of their position, blew themselves up. From the 4 broadcast of Liberty Radio Station on May 1985: “A representative of the US Space Command headquarters in the state of Colorado reported that an aerial explosion of satellite data showed an explosion of a large destructive force in the north-western province of Pakistan, which occurred on April 27 from .g. (The fire broke out the office of the center, which contained lists of Soviet prisoners of war).

Dushmans reported that 97 had been killed by guards and other “brothers”. According to other data - about 200 people, including about 100 Afghan dushmans, 9 representatives of the Pakistani authorities, 28 officers of the Armed Forces of Pakistan. 3 rocket launchers Grad (BM-13), about 2000 thousands of missiles of various types and shells, 40 guns, mortars and machine guns were destroyed. Killed 6 military instructors from the United States.

Since the beginning of May 1985, all information about the events in Badabera has been tightly blocked by the authorities of Pakistan. The event was visited by Lieutenant-General Fazl Haq, Governor of the North-West Frontier Province, and General Zia Ul Haq, President of Pakistan, who had a difficult and unpleasant conversation with the leaders of the Duchy. After this conversation, the field commander G.Hekmatyyar, who was in charge of the defeated training and terrorist center, gave an order to his troops, which contained a clause: “Do not take Russian prisoners. When captured destroy on the spot throughout the territory of Afghanistan "...

However, something still leaked. And in the same May, 1985, the world news agencies spread around a sensational news - In one of the “Afghan refugee camps”, Soviet soldiers captured by the Mujahideen raised an uprising. This information was transmitted by 27 in May and the Novosti Press Agency.

Soviet and later Russian side has repeatedly appealed to the Pakistani authorities for permission to visit the camp, but was refused. From the official letters from the representative of the Russian authorities to the Chairman of the Committee for the soldiers-internationalists of the Council of CIS Heads of Government:

“Information about the heroic uprising of Soviet prisoners of war in the Badaber camp is confirmed by the documents of the US Department of State available at our disposal, the materials of the MGB of Afghanistan, the testimony of direct eyewitnesses and participants of these events from the Mujahideen and Pakistanis, as well as statements by B. Rabbani (IAA), G Hekmatyar (IPA) and others. In addition, at the beginning of 1992, Pakistan’s Deputy Foreign Minister Shahriyar Khan officially gave the names of the 6 participants in the Badabera uprising ... "


In the mountains near Peshawar in Pakistan,
Deciding the shame of the captivity blood wash off,
On the night a group of prisoners revolted,
To live a free day.

We are not broken slave pads,
And even the machines did not take us,
Enemies are cowardly all direct fire,
The Pakistani guns were shot.

And let us a little, but no one faltered,
Though death's eyes look to our eyes,
Soviet soldiers it means
That even the dead will not win us.

Our Motherland is a star shining far,
And catches the eye of the summons this light,
We will not retreat for anything in the world
And there are no cowards between us.

We are fighting, but the strength is gone,
Living less and less chances are not equal
Know the Motherland, you have not changed,
Your misfortunes are in trouble.

Ctrl Enter
Noticed a mistake Highlight text and press. Ctrl + Enter
We are
Rivers of blood on the land of Bengalis. How one of the most populated states of the world fought for independenceTactics of the Afghan insurgents
143 comments
Information
Dear reader, to leave comments on the publication, you must to register.