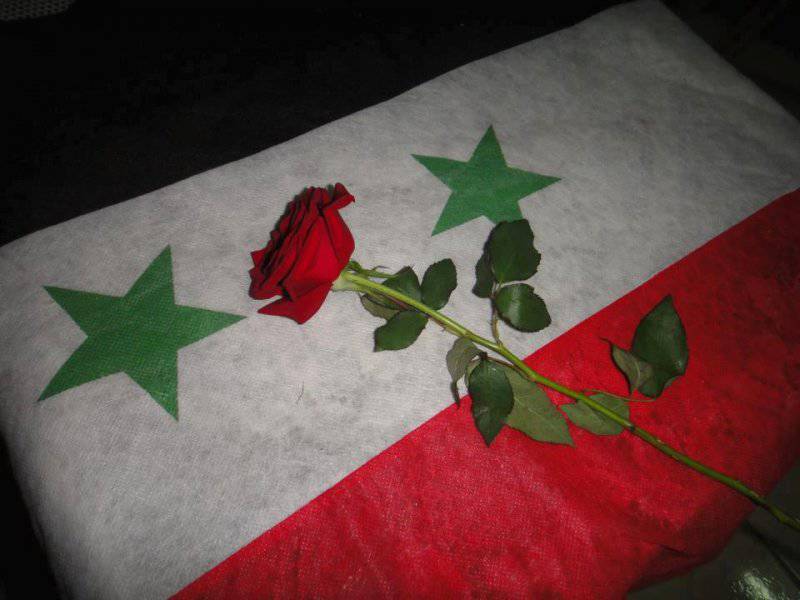 And again - the shelling of peaceful neighborhoods

Those whom the United States and the West consider themselves "freedom fighters" continue mortar shelling of peaceful residential neighborhoods. On April 10, two mortar shells were fired at one of the modern quarters of Damascus - Kafr Sousse. One civilian was killed, two were wounded.

Another mortar attack on the same day occurred on Tahrir Square in the Syrian capital. Al-Fordous mosque suffered. Fortunately, no one died, but a fire broke out at the scene of the crime, and material damage was caused to nearby buildings and cars.

In another major city of Syria - Aleppo - the campus of the University was again fired. There now, in addition to students, live refugees from areas captured by bandits. Fortunately, this time there were no casualties. The long-suffering campus of the University of Aleppo still keeps the memory of the previous shelling that killed about 100 people - students, employees, refugees ...

And at the University of Damascus, a ceremony was held in memory of students who died as a result of mortar shelling of the dining room of the architectural faculty. Let me remind you - then 15 people died and dozens were injured. University rector Muhammad Amer Al-Mardini said that by killing students just because they wanted to attend classes, the terrorists had hurt all Syrians. But история remember the names of the martyrs who died, and Syria will always be proud of them.

Gifts from the state were given to relatives and friends of the fallen, although it is clear that no rewards will compensate them for the terrible loss ... At the site of the tragedy, it was decided to build a memorial, where the names of the innocent victims would be carved.

Sport is out of politics? Or not?

An unprecedented event occurred in the world of sports. At the karate championship in Turkey, the Syrian national team was officially invited by the Turkish Karate Federation and the World Karate Union "Shotokan".

However, when the Syrian athletes flew to the airport - they were told that they would not participate in the championship. Without any explanation. They say that such a decision was made, that's all.

They learned another news - on behalf of Syria, at the championship, some dubious "guys" who are not related to ATS will perform under the flag that was in Syria during the period of French colonialism. It was this colonial rag that the Syrian “oppositionists” took as their symbolism.

In the two previous karate championships, Syrian athletes achieved success, won gold and bronze medals. But any achievement of the Syrian state, even in the field of sports, far from politics, is like a bone in the throat of Western politicians. Because sports victories cause the rise of the patriotic spirit of the nation. So it was, for example, at the end of last year, when Syrian footballers won the West Asia Cup.

Therefore, athletes have become one of the targets of terrorists. Several famous figures from the world of Syrian sports were killed. Repeatedly subjected to mortar fire Tishrin Sports Complex in Damascus. This had to be written in the article “Last Jump”. Since then, "Tishrin" twice more subjected to mortar fire, although not with such tragic results.

And now Syrian athletes have become victims of arbitrariness at the international level.

The exclusion of the Syrian national team from participation in the karate championship can only be described as the crudest violation of all sports rules, in particular, the Olympian's Code of Honor, which has been in effect since the very beginning of the Olympic Games.

Execute can not be pardoned

In the US, a scandal broke out in connection with the exposure of an American, a former soldier who carried out terrorist activities in Syria on the side of the militants.

30-year-old Eric Harrun fought as part of one of the Al-Qaida factions - Djebhat an Nusra. Thus, the young man, who was bored with the "gray life", decided to spend his vacation and have fun.

But not everything is simple for a visiting guest performer. While hunting for Syrians, he did not think that he was violating the US law on illegal use weapons outside the US Now, according to the law, if it is proved that his bloody “leave” led to the death of people, the death penalty is waiting for the unlucky “hunter”.

The American said that he shot at least a man at 10 and does not know for sure whether he killed anyone. Preliminary court hearings on his case are held in the state of Virginia, where he was refused to be released on bail.

The cynical "hunter" naturally found defenders. So, his public defender Jeremy Kamens said that it is unusual for the US to blame a person who "fights to achieve goals that coincide with American interests."

Protecting the ex-soldier claim that he fought for the interests of the United States, because "Dzhebhat An-Nusra" shares the opinion of the American government that Syrian President Bashshar al-Assad should leave.

The situation is absurd. On the one hand, the unfortunate warrior violated American law, and, very seriously, violated if he was entitled to the death penalty. On the other hand, it turns out that the US government is also violating the law in the same way by helping the Syrian “opposition”. The US leadership has driven itself into a trap, signing with one hand recognizing Al-Qaeda and Dzhebhat An-Nusra as terrorist organizations (which means they cannot be considered as such), and with the other hand providing them with all kinds of assistance ( informational - on all fronts).

Valuable recognition, however, was made by the defenders of the “vacationer” -killers - the terrorist organization “Dzhebhat An-Nusra” is an ally of the American government! It turns out that not only the former soldier should be sentenced to death, but the entire White House and the Pentagon in full force. For supporting terrorism and the death of people.

How does the UN chemist

Let me remind you that the 19 march in Aleppo in the Khan Al-Asal district was an attack by militants against civilians using a chemical warhead missile. As a result, dozens of people died a painful death. Syria appealed to the UN to investigate the incident. Russia and China supported her in this matter.

But other forces, wishing to cover the barbaric crime of their charges, are doing everything to get them out of attack.

At first, the Russian experts refused to be taken into the group that was to investigate. Then they put forward unacceptable conditions for Syria. It turns out that this group should not so much investigate the crime of terrorists in Aleppo as examine the arsenals of the weapons of Syria itself. In addition, the group demands unlimited powers for itself that are not related to those necessary to investigate the incident in Khan Al-Asal - free movement around the country using, inter alia, air vehicles, visiting the country's defense facilities, etc. .
Russia made a statement accusing the UN of disrupting the investigation. “The UN Secretariat puts forward requirements that go far beyond the investigation of the incident in Khan Al-Asal: unlimited access of experts to any objects in the SAR, to all persons whom the experts consider necessary to be questioned, and as means of transportation of the expert group, an indication of Aviation and watercraft. This approach is reminiscent of the line with respect to the investigation at the time of the presence of WMD in Iraq, which was based on knowingly false data and led to well-known consequences, ”the Russian Foreign Ministry said in an official statement.

I also recall the situation that preceded the NATO attack on Yugoslavia, when, after the wrong, biased conclusions of an equally false commission (which also did not include representatives of Russia), negotiations were held in Rambouillet, on which the Yugoslav side was put forward obviously impeding the sovereignty of the country.

So Syria today put forward obviously unacceptable conditions. Either way, the West wants, after undermining the UN, to send spies into the SAR, who then must find the “forbidden weapon” - and realize the invasion. Or, their goal is more modest, but also cynical - to put forward unacceptable conditions to thwart an investigation, which, if it is objective, can put the Syrian "opposition" and those who support it under severe blow. And at the same time to use the refusal of the Syrian leadership from unacceptable conditions as a trump card in the information campaign against independent Syria, the war against which continues on all fronts.

Ctrl Enter
Noticed a mistake Highlight text and press. Ctrl + Enter
We are
Refugees from Syria. Will Russia accept immigrants from the Middle East?Damascus: mortar rains
64 comments
Information
Dear reader, to leave comments on the publication, you must to register.