There is a hunt for "Sapsan" 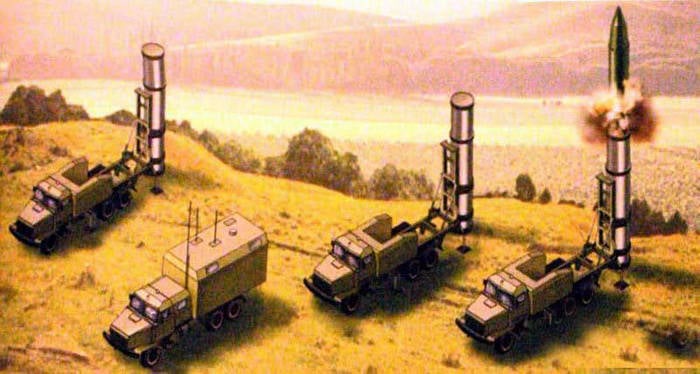 From time to time in Ukraine, from time to time, passions are raging - and not only in the media - around the fate of a promising and, apparently, necessary and important project for the defense capability of our country to create such a modern, high-precision weaponsas a multifunctional missile system (IFRC) "Sapsan".


Unfortunately, his path from design to practical implementation turned out to be similar to domestic roads - equally rich in potholes and potholes. And the attitude to the Sapsan project by the leaders of the Ministry of Defense (customer of military equipment and armaments) varies depending on a number of subjective factors (and especially the one who is at the helm of the military department) - from support to indifference and even rejection.

Nowadays, the future of the Sapsan is still hazy, and this is bound to disturb. We asked the head of the special programs department of the State Space Agency of Ukraine (SCAU), Yevhen MAKHONIN, to clarify the situation and comment on some of the nuances in this area.

Evgeny Ivanovich is an experienced specialist in missile technology control systems. At one time he served as a rocket officer - on the northern range in the Arkhangelsk region (now the Plesetsk cosmodrome), he made his way from lieutenant to colonel. And after the collapse of the Union, Makhonin deals with similar problems in independent Ukraine.

Road with potholes and potholes

- First of all, I want to emphasize that modern high-precision weapons (one of the examples of which should be Sapsan IFRC) are non-nuclear factors in armed confrontations. Moreover, as the experience of recent local hostilities shows (for example, in 1999 during the military conflict in Yugoslavia), it is precisely the mass use of precision weapons that often achieve their goals even without the use of ground forces.

The project of the IFRS “Sapsan” was proposed by the specialists of the state enterprise “Design Bureau“ Yuzhnoye ”named after MK Yangel, who has extensive experience in creating combat missile systems of various types. And the Yuzhniy Machine-Building Plant named after Yu. A.M. Makarova ".

The fact that the APU needs highly effective non-nuclear deterrent forces was the first to be seriously talked about in 2007. But although about two years later, the then leadership of the state declared the importance of creating its own operational-tactical missile system, the matter did not go further than discussion of preliminary studies and endless approvals.

Probably, it should be said that Mikhail Yezhel turned out to be the only head of the military department who strongly supported the idea of ​​the expediency of creating, producing and equipping the army with promising precision weapons. President Viktor Yanukovych issued a decree in 2011, and at the end of the same year the government approved the state program for the creation of the Sapsan missile system.

In the Yuzhnoye design bureau, they have begun to design the IFPC. The Ministry of Defense acted as the customer (with financing for the development), and the State Specialized Aerospace University of Ukraine provided preparation for the production of Sapsanov at Yuzhmash.

All this will require $ 400 million. By the way, the creation of a Russian Iskander operational tactical missile system, close in technical characteristics to the Sapsan, cost about $ 1 billion, as reported in the press.

The sketch project "Sapsan" was created and protected by its developers in the MOU. It would seem that now there should be no doubt that the creation of such a missile complex is an issue solved.

However, later, ”continues Yevgeny Makhonin,“ when the Defense Ministry was headed by Dmitry Salamatin, the position of the military department in relation to the Sapsan, alas, changed to the diametrically opposite of the one that was at Yezhel. Reports began to appear, they say, in the Ministry of Defense doubt the feasibility of the creation, production and adoption of these IFRC into the armament of our army.

The current position of the new Minister of Defense Pavel Lebedev regarding the Sapsan has not yet been officially announced. But time does not wait - and it remains less and less until 2015, when according to the program "Sapsans" should enter into service with the missile forces. But after technical design, it will be necessary to create prototypes in the metal, to test them, and then to launch mass production and ensure the delivery of the complexes to the troops. Moreover, 2015 is not named accidentally. The fact is that by 2015 — 2016's. the technical resource of the Tochka-U operational tactical complexes currently in service with our missile forces is exhausted. And on their own, Ukrainian enterprises cannot extend the resource of this aging technology even from Soviet manufacture. 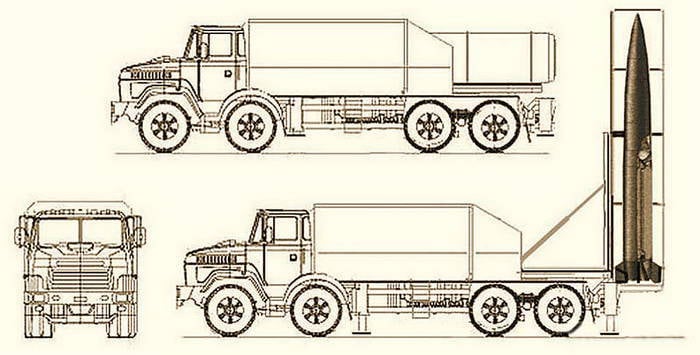 “The Sapsan complex will have a range of firing sufficiently high for this class of weapons (approximately 300 km), which will allow the use of such IFRC from the depth of its own troops,” says Yevgeny Makhonin. - This fact, together with the short time spent at the launch position of the self-propelled launcher (based on the KrAZ chassis) and its high mobility, makes the complex low-vulnerable for the enemy. And the accuracy of striking "Sapsan" - a few meters. All this will be achieved by a combination of the inertial guidance system equipped with a laser gyro and satellite navigation system provided for in a rocket, and in the further development of the complex - an optical or radar homing head.

The missiles used in this complex can be equipped with different warheads - high-explosive, penetrating, cluster and others. At the same time, the multifunctional capacity of the Sapsan IFRC will be provided by using transport-launch containers with different missiles placed on the basic launcher — either tactical or tactical, and then volley-fire missile systems.

High technologies, laid in the "Sapsan" by its developers, allow missiles to successfully overcome the most advanced missile defense system of the enemy. On the entire flight path of the rockets fired by the Sapsan, they are controlled using aerodynamic and gas-dynamic control surfaces. And the high speed of the flight and the fact that the missiles are scheduled to be manufactured using Stealth technology (and they will have a small effective dispersion surface), reduces the likelihood of anti-missile attacks. And the flight paths of such ballistic missiles are difficult to predict for the enemy. After all, immediately after the launch, and during the approach to the target, a rocket fired from the Sapsan will be able to maneuver intensively. In addition, most of the flight path will take place at high altitudes, which also reduces the likelihood of damage.

As you can see, the characteristics of the Sapsan IFRC correspond to the world level of similar in designation of foreign missile systems.

By the way, Israeli experts - recognized experts in the creation of high-precision weapons-new products - have relied in this area on the ballistic (airballistic) complex with the LORA (OTRK) rocket, and moreover in the transport-launch container. This ensures the safety of the rocket, and reducing its mass, and increasing the combat readiness of the complex, and simplifying the operations of transportation, installation and preparation for launch.

Who benefits from a "winged" alternative

- However, the Sapsan has not only supporters, but also opponents. The latter are trying to sow doubts about the advantages of the IFPC and propose the creation of cruise missiles in Ukraine.

“Indeed, recently there have been publications in the media, whose authors are trying to present themselves as objective and independent experts, and comparing the Sapsan IFRC and cruise missiles, they are trying to assert that, according to the“ efficiency-cost ”ratio, to bet on a deterrence weapon in the form of domestically produced cruise missiles.

But it’s simply incorrect for this indicator to compare different types of missile weapons - ballistic missiles (namely, they will be used in the Sapsan IFRC) and cruise missiles. This is about the same as if in the military aviation tried to compare the ratio of "efficiency - cost", say, a fighter with a bomber.

Yes, in Ukraine there are some developments for cruise missiles as a deterrent weapon. However, on the basis of these developments and with the available scientific, technical, technological and production potential, you can only create a cruise missile of yesterday, flying at medium altitudes (200 — 300 — 500 — 1000 m) and with subsonic speeds.

The technology of creating cruise missiles capable of flying, bending around the terrain of the earth’s surface, at ultra-low altitudes - 50 m and even lower (due to which radars and other missile defense systems do not fix it), while developing supersonic speeds, now only the US and Russia have . In Ukraine, such high technologies are now absent, and their creation would require considerable time and very substantial financial costs, which is unrealistic in the current economic situation.

And cruise missiles, flying at medium altitudes at the speed of a passenger airliner, are not only vulnerable to missile defense systems, they are easily hit by anti-aircraft missile systems, including portable missiles (MANPADS), which are fired from the shoulder, and they are armed with armies most countries.

High efficiency, "Sapsan" confirms, in particular, the time of readiness of this complex for a rocket launch is just a few minutes. For comparison: in the Russian Iskander complex, the indicator of readiness for launch is substantially greater - 15 — 20 minutes. In addition, the time the missile approaches the Ukrainian IFPC will be an order of magnitude shorter than the cruise missiles that are proposed to be built (20 — 30 min.). This is more than enough for adequate opposition from missile defense systems.

As for the cost, it is worth recalling that, for example, only one Indo-Russian guided missile "BrahMos" (its land version - with the possibility of hitting ground targets), the development of which is a continuation of the Russian cruise missile "Yakhont", costs $ 20 million.

- And how does the General Staff of its armed forces react to the situation around the creation of high-precision weapons in Ukraine?

“The General Staff reacts, unfortunately, as“ effectively ”as the“ independent experts ”think in their publications, - Yevgeny Ivanovich answers. - He even agrees to implement the idea of ​​creating in our country an operational-tactical missile system based on C-300 anti-aircraft missile systems, which have already worked out their resources. And it does not take into account that the tactical-technical characteristics of such a complex with such a "refinement" will be far from foreign models of modern operational-tactical missile systems. And we will not sell such obsolete complexes to anyone.

It is clear that in conditions of an extremely limited defense budget in our country, competition between defense enterprises is intensifying. For the "victory" in such a tough struggle all sorts of means are used. Moreover, such lobbying activities are particularly acute during the formation of the defense budget at the beginning of the year.

Indeed, it cannot be ruled out that in “objective” publications that appeared at such a time, discrediting some developments and, on the contrary, promoting other types of weapons and military equipment, some “experts” simply defend the interests of their customers, - concluded Yevgeny Makhonin .

Ctrl Enter
Noticed oshЫbku Highlight text and press. Ctrl + Enter
We are
About Stalin and KhrushchevMilitary reform as an integral part of the security concept of the Russian Federation: Systematic dynamic assessment
Military Reviewin Yandex News
Military Reviewin Google News
189 comments
Information
Dear reader, to leave comments on the publication, you must to register.