Colonizers do not accept loss of colony 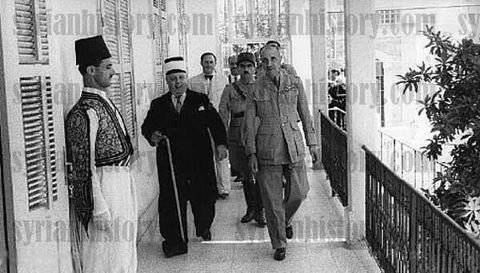 Syrians found and distributed in social networks a photograph taken in the distant 1941 year, when Syria was still under the rule of the French colonialists. In a black and white worn shot - French General Jorge Katreau walks alongside an old woman with sly eyes - Nur-Eddin Al-Khatib. More than 70 years passed - and the grandson of this Nur-Eddin - Muaz Al-Khatib, a former preacher at the Umayyad Mosque in Damascus, now a deserter and fugitive from the Motherland - was elected head of the "Qatari coalition" created by 11 in November at the meeting in Doha. Yeah, nothing to say, a family with old traditions!

And France, ahead of the rest, thanked the hereditary collaborator Al-Khatib, whose grandfather had collaborated with the colonialists, for faithful service. It was the former metropolis that first recognized the “Qatari coalition” as the legitimate representative of the Syrian people. These are our “tyranobortsy” now! Well, if even to look at the flag of this “opposition” - green-white-black with three stars - this is the flag of the period when Syria was under the mandate of France.

There is one thing in common between the last French presidents (like the American ones) - each of them wants to participate in some kind of “democratic” aggression. Under Mitterrand, Bosnian Serbs were bombed, and France, as a permanent member of the UN Security Council, supported this decision. When Chirac was bombed Yugoslavia, and France was actively involved in the operation called "Merciful Angel", which killed hundreds of children and thousands of adults. Sarkozy came to power - and the loudest called for an invasion of Libya, and it was the French aircraft that first launched strikes against this country. Now Hollande is also trying to “otdemocratizirovat” Syria.

Even in the summer, French Prime Minister Jean-Marc Eyreau did not hesitate to say that France was supplying communication equipment and other equipment to Syrian militants. He said that this equipment was not meant for murder. But still - is this not aiding the murderers?

And now the pseudo-socialist Francois Hollande met with the grandson of an old collaborator, Muaz al-Khatib. After this meeting in Paris, an ambassador from the Syrian terrorists appeared - a certain Munzir Machos, who along with his chief was on the delegation that visited the Elysee Palace. But these “fighters for the rights of the Syrians” of the French mercy in the form of the appointment of an illegal ambassador were not enough - they begged Hollande to deliver a heavy weapon. He promised to bring this issue to the EU.

Previously, Hollande announced plans to create a “buffer” and “no-fly” zone in Syria. True, then his own Foreign Minister cooled the ardor of the chief, stating that such zones could be created only by decision of the UN Security Council. And the position of the UN Security Council is clear - Russia and China do not give the go-ahead for another adventure, similar to the one that has already destroyed Libya. But Hollande, knowing this, is trying to raise the morale of the terrorists operating in Syria. For this he promises the creation of a "no-fly zone", that is, the merciless bombardment of Syria. And only this terrorists want. They always take the risk of installing improvised explosive devices near schools, hospitals, shopping centers, mosques. Of course, they want such support from the air so that they don’t have to take any more risks - once - and a huge bomb falls from a French or American plane and destroys a building, to the explosion of which the terrorists would have to spend a lot of effort. But you can see how the “opposition” is Syria’s road, if they want such a fate for its cities!

In addition, French Foreign Minister Fabius admitted frankly that French intelligence services helped some defectors to flee Syria. He did not specify to whom it was, but it was clear that this was the traitor-general Manaf Tlas and the former prime minister of Syria, Riyad Hijab.

Both traitors, without shame, confirmed that they had fled the country with the help of French special services. In the normal world, their political career would finally end there, for no nation in the world could forgive such and recognize the fugitives as their representatives. But in a world where such Jews enjoy the patronage of some rich states, these fugitives, who are under a powerful “roof,” still dare to count on something. These types have hopes that they will be included in some kind of “shadow government” and recognize its legitimacy!

Another predecessor of Hollande, the executioner of the Libyan Jamahiriya, Sarkozy, and his foreign minister, Alain Juppe, who was with him, used to repeat, like a broken gramophone record: "Assad must leave." The people of France did not like it, the fervor of the fighters, Nicolas the Bloody, and he elected another president. But the new president began to play the same fairly hackneyed record.

70 years have passed since France lost Syria as its colony and was forced to recognize its independence. But, as recent events and all these confessions of the “opposition” show, the colonial itch haunts it. She does everything to regain her dominion, although this time, even if she defeated Syria, it would not be complete, she would have to share it with the United States, Turkey and other NATO partners. But this does not embarrass Hollande, who supports any villain in Syria, if only the position of this villain is within the framework of the neocolonialist plans of the French false socialist.

Having barely gained freedom from Turkish rule, in 1920 Syria immediately fell under French rule, and the League of Nations gave France a mandate to govern the country. The French occupation army, led by General Henri Gounod, was opposed by the weakly armed Syrian army, which was just emerging, which had nothing but rifles and machine guns. The French had heavy artillery, aviation. The confrontation was unequal. Syrian Defense Minister Yousef Al-Azme accepted the fight, knowing that it was impossible to win. But a true patriot of his homeland, he could not allow the French to take Damascus without a fight. The battle took place 23 kilometers from Damascus, in the mountain gorge Meisalun. Yousef Al-Azme personally participated in an unequal battle. The fighters fought all day, but the superiority of the French was too great. Only when they were all killed, France was able to advance to Damascus.

In the 1925 year, the Syrians and the Druze rebelled against the French occupation, they even almost managed to liberate Damascus, but France crushed the rebellion with its military power in 1927. The first shot in this uprising was made on 7 June 1925 of the year - the hero of the uprising, Hussein Murshid Radwan, wounded a French officer when he ordered to disperse a peaceful anti-French demonstration.

Syria honors its heroes. And in the beginning of November, Hussein Murshid Radvan was erected a magnificent monument in the city of Suweida. The sculptor Fuad Naim paid special attention to the hero's huge sword, which he squeezes in a powerful hand, calling for the Syrians to fight.

These were the real rebels who fought for the Motherland. And now the word "insurgents" utterly utterly, now so called the trash, recruited from all over the world, stupefied with drugs and kills Syrians for money.

And in the center of Damascus stands a monument to Syrian Defense Minister Yousef Al-Azme, the hero of the battle in the Meisalun Gorge. More recently, another monument to Al-Azme stood near the building of the General Staff. But 3 of September of this year, attacking the General Staff, the terrorists did not spare the monument to the national hero. Vandals destroyed it. How can there be a road история Syria to these mercenaries? Or the descendants of those who collaborated with the occupiers?

So far, the Syrian state and the people of the country are putting up monuments to the heroes - the so-called “oppositionists” cooperate with neo-colonizers, are worn with colonialist flags, killing soldiers and civilians. France recognizes these killers and terrorists as "legitimate representatives of the Syrian people." But if people need such “representatives”?