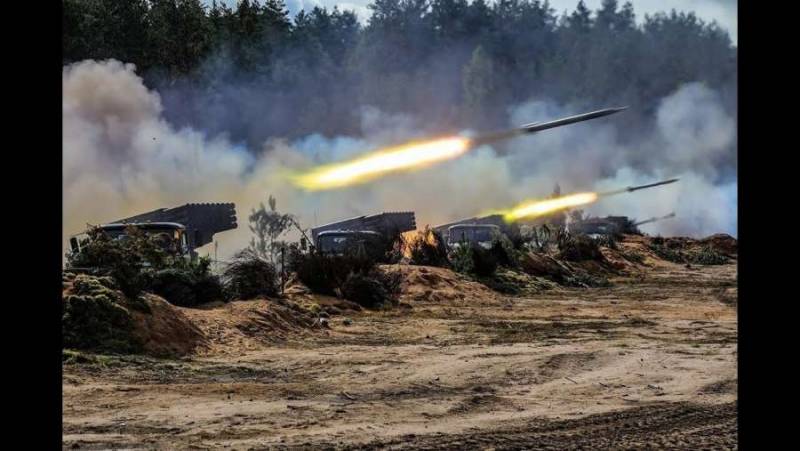 Russia's special military operation in Ukraine, which began on February 24, was, in fact, a response to the West's refusal to consider Russian proposals for security guarantees. Moscow, as promised, used military-technical arguments where it was least expected - it decided to close the issue of Ukraine, where the Americans so persistently invited it in the hope that Russia would not dare to take such drastic measures.


The geopolitical interests of Russia at this stage required decisive action, the first step and trigger was the recognition on February 22 of the independence of the republics of Donbass. A day later, a shocking military operation "to provide assistance to the republics" and "to denazify and demilitarize Ukraine" followed, at first glance with somewhat divergent tasks.

It should be recalled that during the second Chechen war, it was also declared that only the lowland areas would be attacked, but in fact the entire territory of Chechnya was subjected to mopping up. So here, the entire territory of Ukraine will be subjected to "demilitarization", similar to the American operation "Shock and awe" in Iraq, using the tactics of non-contact suppression with high-precision weapons (aviation, missiles, artillery and MLRS) of the Ukrainian Air Force, Air Defense, IMF, command and control centers, military infrastructure, ammunition depots, fuel and lubricants, excluding the destruction of civilian objects and the population.

Tactics of the Russian troops

As follows from the actions of the Russian troops, the task was to conduct a fleeting military operation to defeat the Armed Forces of Ukraine, to force Ukraine to peace with the removal of the ruling Ukronazi regime from power. The offensive was organized from different directions throughout Ukraine, with the grouping of the Armed Forces of Ukraine split into two boilers - Donbass and Kyiv.

Immediately after the launch of powerful missile and air strikes, an offensive began in four directions: in the northeast from Belgorod to Kharkov and Volchansk, in the northwest from Belarus and Bryansk through Sumy to Kyiv, in the south from Crimea in divergent directions to Zaporozhye, Mariupol and Kherson, Nikolaev, Odessa, in the southeast, the offensive of the LDNR corps with fire support from the Russian army against the APU grouping in the Donbass. A counterattack from Kharkov and Crimea was supposed to close the boiler around the Donbass grouping of the Armed Forces of Ukraine, and from Sumy and Odessa - a boiler around Kyiv.

The main direction was Kiev with the aim of capturing the capital and displacing the ruling regime. To strengthen this direction, a Russian landing force was thrown out at the strategic airfield in Gostomel near Kiev, which held out there for more than a day before approaching tank units from Belarus and Bryansk.

The offensive was carried out without the assault and capture of large cities, entailing inevitable destruction and mass death of the population, they were simply bypassed and moved on, developing the offensive. It was necessary to break the will of the enemy to resist and force the authorities in Kyiv to surrender, after which the collapse of organized command and control of troops and the cessation of resistance throughout Ukraine would follow.

In the Donbass, where the most numerous and combat-ready part of the Ukrainian army was deployed, the offensive of the LDNR corps was more of a tactical nature to constrain the actions of the Armed Forces of Ukraine in the Donbass and prevent its transfer inland, where it could create problems for Russian strike groups moving towards each other, allowing they can bypass large cities without bloody street battles and take them into an operational environment. The offensive here was moving rather slowly, also due to well-equipped echeloned positions, fired and well-coordinated composition of the Armed Forces of Ukraine.

The advance of Russian troops on the first day of the offensive was swift, the Armed Forces of Ukraine were shocked by an unexpected blow, and in all directions, except for the Donbass, they did not offer serious resistance. There were only focal clashes, after which the positions surrendered almost without a fight. The greatest successes were in the Kiev direction, while the encircled landing force in Gostomel found itself in a difficult situation, which was unblocked the next day by tank columns breaking through from Belarus.

From the second day, the pace of the offensive slowed down, the operation began to bog down, the lack of troops to capture such a vast territory, the absence of a second echelon, the increased resistance of the Ukrainian army that had retreated from the shock of an unexpected attack, the imperfection of logistics and the lack of specialized units for clearing and securing the occupied territory and protecting the rear and communications. Apparently, for these purposes, about 10 thousand fighters of the National Guard of the Chechen Republic are sent to the territory of the conflict.

The tactics adopted by the Russian command to break through the enemy’s defenses without capturing large cities and to move forward rapidly in order to organize two boilers of the Armed Forces of Ukraine led to the separation of strike groups that did not leave garrisons and strongholds in the rear. The occupied territory was not controlled by the troops, the rear and communications turned out to be unprotected, the enemy began to organize attacks by mobile groups on columns, capture settlements and counteract the supply and advance of troops. Columns of equipment on the march turned out to be easy prey for the enemy and were destroyed.

On the third day, the LDNR corps, with difficulty and heavy losses in some areas, broke through the defenses of the Armed Forces of Ukraine and, building on success, reached Mariupol and Severodonetsk. The threat of encirclement and complete defeat loomed over the grouping of the Armed Forces of Ukraine, part of the troops began to be withdrawn from near Luhansk to strengthen the Kharkov and Kiev directions, communications had not yet been cut and made it possible to realize this.

A difficult situation has developed around Kharkov. Early in the morning of February 24, the troops, having crossed the border without resistance and an hour later reached the ring road around the city, did not enter it and went towards the Crimean group, closing the encirclement of the Armed Forces of Ukraine in the Donbass and leaving only small barriers in the rear.

The enemy took advantage of this and began to impose battles in the rear of the Russian troops. For four days, a powerful cannonade of artillery, mortars, MLRS and outbreaks of fires spread east of Kharkov, which unnerved the population of the city, and local authorities sowed panic, spreading rumors about the imminent defeat of Russian troops.

The forces of the advancing troops, apparently, were not enough to suppress the enemy, there was also no air support, which led to serious losses, and then a video appeared on the network with a defeated Russian column in the area.

Early on the morning of February 27, Russian troops in armored vehicles with "Z" signs without heavy equipment entered Kharkov and in small groups with only small arms began to comb and clear the city. Units of the National Guard and nationalist formations freely let them into the city and, when they broke up into small groups in residential areas unfamiliar to them, they attacked, destroyed or captured them. This tactic of clearing the city in small groups was far from effective and led to the loss of personnel.

What are the results?

The Kiev authorities from the first day understood that they would have to leave the territory of Ukraine, so they adhered to the scorched earth tactics. Bridges, warehouses, infrastructure facilities, transport, dams, ships, military equipment and property were deliberately blown up. As if for the formation of territorial defense units, by order of the Ukrainian president, all those who wished, upon presentation of a passport, were issued machine guns and an unlimited amount of ammunition.

They went the farthest in Kyiv and without presenting documents they began to give out weapons, for which long queues lined up. In a few days, about several tens of thousands of machine guns were issued. The criminals were delighted with such activities of the authorities and armed themselves to the teeth for many years to come. The consequences were not long in coming.

Gangs began to form in the city, lawlessness began, robberies of apartments and shops began. Armed showdowns with dead and wounded between the “teroboronets”, the police, the SBU and the military became more frequent, since interaction was not organized between them, and they accused each other of working for the “aggressor”, and the frightened citizens were afraid to appear on the street. The authorities in Kyiv have achieved impressive results, and now it will not be so easy for any administration to restore order in the city.

The most effective were missile and air strikes with high-precision weapons on military facilities and infrastructure in Ukraine, the control system of the Armed Forces of Ukraine was partially disrupted, the air defense, Air Force and Navy were suppressed, the units of the Armed Forces of Ukraine were demoralized and did not offer serious resistance at the initial stage.

Nevertheless, the enemy's will to resist was not broken, after the restoration of controllability of the troops, he began to offer serious resistance in some places and even make counterattacks. Under the threat of capturing the capital, the country's leadership fled to Lvov, but it was not possible to paralyze the controllability of the state and the army.

The pace of the offensive in four directions, covering the whole of Ukraine, was high on the first day and provided access to the operational space. Kyiv and Mariupol were taken into operational encirclement, Melitopol was captured, and such large cities as Kharkov, Sumy, Kherson, Nikolaev, Berdyansk were left in the rear without sweeping with enemy garrisons. The refusal to consolidate the territory and capture cities threatened communications and logistics.

From the second day, the pace of the offensive began to fall, the forces of the groups were not enough to quickly and successfully capture the entire territory of Ukraine.

The shock groups began to get stuck, with every day the advance is taking place with difficulty and losses. It has not yet been possible to organize the encirclement of the Donbass grouping and the blocking of Kyiv.

The distracting blow of the corps of the republics to pin down the Armed Forces of Ukraine in the Donbass was a partial success, they could not advance far without serious support from the Russian army, achieving success only in the Mariupol and Severodonetsk directions. The grouping of the Armed Forces of Ukraine in the Donbas was not defeated, it is resisting, and part of the troops is being transferred to reinforce the Kiev and Kharkov directions.

The incomprehensible gestures of negotiations with Kiev that began in Minsk on February 27, apparently, are carried out in order to show the West the desire for peace without any prospects of achieving it with this Kiev authorities.

The partial solution of the tasks assigned to the military operation does not mean the failure of the entire operation as a whole; after the decisive steps taken, it will no longer be possible to stop. The goal of denazification and demilitarization of Ukraine will still have to be solved, for this it will be necessary to win a convincing military victory over the Kiev regime, remove it from power, clear the territory of Ukronazis and bandits, place a temporary government controlled by Moscow at the head, begin the process of denazification and purge of state, local and economic management structures and determine in what form the former Ukraine will be integrated into the Russian civilizational space.