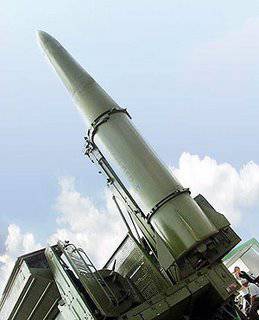 Designed to defeat the combat units in the usual equipment of small and area targets in the depth of the operational construction of the enemy forces.

The Iskander tactical missile system (OTRK) (Iskander-E for export, Iskander-M for the Russian army) was created under the terms of the Intermediate-Range Small-Range-Weapon Treaty (INF) of the year 1987 and the rejection of nuclear weapons in theaters of war by opposing parties. In this regard, the complex was created taking into account such fundamentally new requirements as regards the newly developed missile systems: renunciation of the use of nuclear weapons and the use of combat units only in conventional equipment, ensuring high accuracy of firing, control of the missile throughout (most of) its trajectory flight, the ability to install warheads on the rocket, taking into account the type of targets being hit, a high degree of automation of information exchange and combat operation management.
At the same time, the complex should be able to use these global satellite navigation systems (Glonass, NAVSTAR), hit mobile and stationary targets with a high degree of protection, have enhanced fire performance, effectively overcome enemy air and missile defense systems.

The new Russian OTRK fully meets the above requirements, as shown by its preliminary tests with missile launches in June 2007. Thus, when reporting to the President of the Russian Federation, Deputy Prime Minister S. Ivanov noted that the launch of the new rocket was successful, and its deviation from the intended point of incidence did not exceed one meter. This was confirmed by control data obtained from various means of objective control.

The complex was developed by the cooperation of research institutes, design bureaus and enterprises under the leadership of the Engineering Design Bureau (KBM, Kolomna). This design bureau is known as the creator of the Tochka, Tochka-U, Oka missile systems, man-portable air defense systems (such as Strela-2. Strela-3, Igla) and other weapons.
The launcher of the complex was developed by the TsTB "Titan" (Volgograd), the missile homing system - Central Research Institute of Automation and Hydraulics (Moscow). 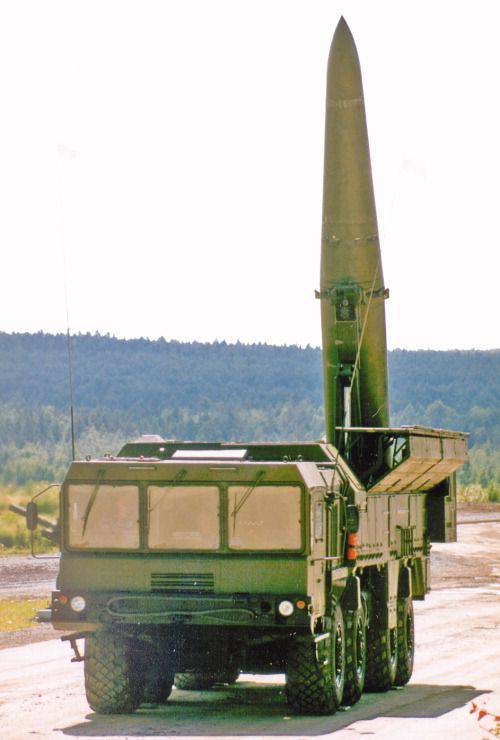 Mobile high-precision operational-tactical missile system (OTRK) is designed to defeat the combat units in the usual equipment of small-sized and area targets in the depth of the operational structure of the enemy troops.
As goals can be:
· Various fire weapons (missile systems, multiple rocket launchers, long-range artillery);
· Anti-missile and air defense weapons;
· Airplanes and helicopters at aerodromes;
· Command posts and communications centers;
· The most important objects of civil infrastructure;
· Other important small and area targets on the territory of the enemy.
High mobility and short preparation time for the launch of rockets provide covert preparation of the Iskander OTRK for combat use.

The main elements that make up the Iskander OTRK are: a rocket, a self-propelled launcher, a transport-loading machine, a regulatory-maintenance machine, a command and staff vehicle, an information preparation point, a set of arsenal equipment, and training aids. 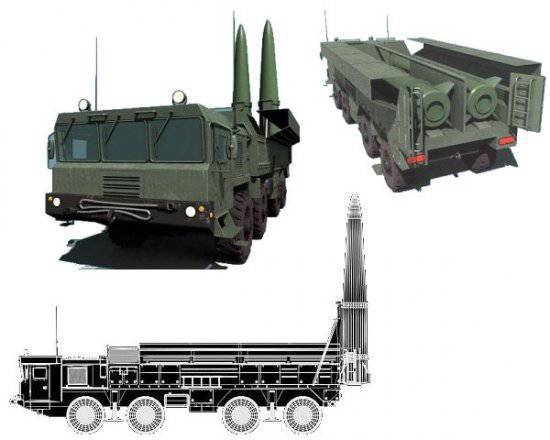 The Iskander complex missile is a solid-fuel, single-stage, with a non-detachable headpiece in flight, a guided and energetically maneuverable rocket throughout the hard-to-predict flight path. It is especially active in maneuvering at the starting and ending sections of the flight, where it approaches the target with high (20-30 units) overload. This necessitates the flight of an anti-missile missile to intercept the Iskander OTRK missile with an overload times more than 2-3, which is now virtually impossible.

Most of the flight path of the Iskander missile system, made using stealth technology with a low reflective surface, passes at an altitude of 50 km, which also significantly reduces the likelihood of its being hit by the enemy. The effect of "invisibility" is provided by the combination of the design features of the rocket and surface treatment with special coatings.

An inertial control system is used to launch a missile at a target, which is subsequently captured by an autonomous correlation-extremal optical homing head (GOS). The principle of operation of the missile homing system is based on the formation of the image of the terrain in the target area by the optical equipment of the GOS, which the on-board computer compares with the standard introduced into it when preparing the rocket for launch. The optical homing head is distinguished by increased sensitivity and resistance to existing means of electronic warfare, which makes it possible to launch missiles on moonless nights without additional natural illumination and hit a moving target with an error of plus or minus two meters. Currently, apart from the Iskander OTRK, no other similar missile system in the world can solve this problem.

It is characteristic that the optical homing system used in a rocket does not need corrective signals from space radio navigation systems, which in critical situations can be disabled by radio interference or simply turned off. The integrated use of an inertial control system with satellite navigation equipment and an optical homing system made it possible to create a missile striking a given target in almost any possible conditions.

The homing head mounted on the Iskander OTRK rocket can be installed on ballistic and cruise missiles of various classes and types.

Self-propelled launcher (SPU) is used for storing and transporting two missiles, their pre-launch preparation and launch on the target in the sector ± 90 degrees relative to the direction of its position on the ground. Autonomous SPU is located on the 8x8 off-road wheeled chassis (MAZ-79306 "Astrologer"), which ensures its high mobility.
To ensure information exchange, SPU is equipped with command and control and communications equipment.

SPU provides automatic determination of its coordinates, data exchange with all links of control, combat duty, storage and preparation of missiles for launch when they are in a horizontal position, as well as their single and volley launch. The time spent by the SPU on the launch site from the moment of the start of preparation until the start of movement after the launch of rockets does not exceed 20 minutes, with the interval between launches of 1 and 2 of rockets not more than one minute.

Launching rockets does not require launching sites specially prepared in engineering and topographic and geodetic terms. Missiles can be launched in the “readiness from march” mode - the launcher takes up a platform (except for swampy areas and loose sand) from the march, the calculation without leaving the cockpit conducts the preparation and launch of the rocket. After the launch of missiles, the SPU goes to the point of reloading with new missiles and is ready to deliver a second missile strike from any starting position.

The transport-charging vehicle (TZM) is intended for the storage of two missiles, their transportation and loading of SPU. TZM is located on the chassis of the MAZ-79306 ("Astrologer") and is equipped with a crane. Full combat weight - 40000 kg, calculation - 2 people. 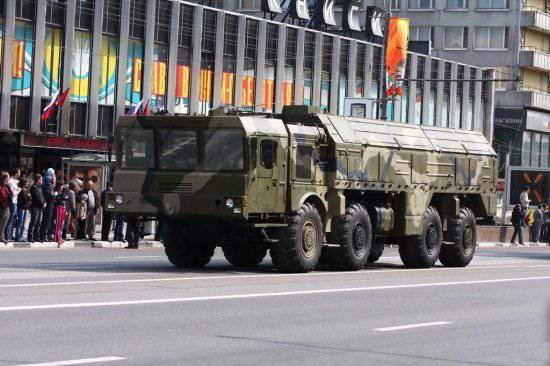 The command and staff vehicle (KSHM) is designed to provide automated control of the Iskander OTRK. It is unified for all management links and is located on the wheeled chassis of KAMAZ vehicles. The use of KSHM in the control unit of the missile brigade, the missile division, the starting battery is provided by the programs and their corresponding settings during operation. Information exchange between various elements of the complex can be carried out in open and closed modes.

The main characteristics: the number of workstations - 4, the maximum range of radio communication in the parking lot (on the march) - 350 (50) km, the task calculation time for missiles - up to 10 s, command transmission time - up to 15 s, the number of communication channels - up to 16 , deployment time (coagulation) - up to 30 min., continuous operation time - 48 h.
The car of regulation and maintenance (MRTO) is located on the wheeled chassis of a Kamaz family of vehicles and is designed for routinely checking onboard equipment of missiles deployed on TZM (as well as in containers), checking instruments that are part of the group sets of spare parts for the complex and maintenance rockets forces the calculation of MRTO.

The mass of the machine is 13,5 t, the deployment time does not exceed 20 minutes, the time of the automated cycle of routine testing of the onboard equipment of the rocket is 18 minutes, the calculation is 2 people.

Point of information preparation (PIP) is designed to determine the coordinates of the target, prepare the necessary information and bring it to a self-propelled launcher.

PPI has two automated workplaces, provides for determining the coordinates of the target and bringing them to the SPU in a time of no more than 2 and 1 minutes, respectively. Able to conduct continuous combat work for 16 hours.

The life support machine is intended for the deployment of combat crews (up to 8 people), their rest and eating. 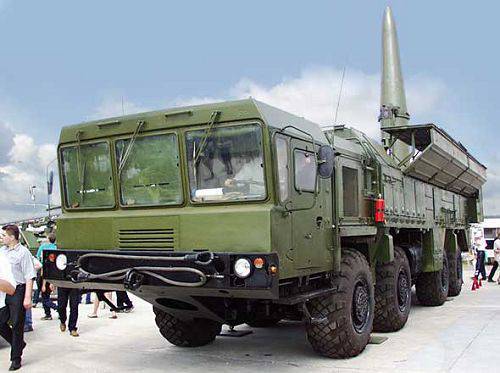 Features of the complex
OTRK "Iskander" was created using modern scientific, technical and design achievements in the development of operational-tactical missile systems. In terms of the implemented technical solutions, high combat effectiveness, today it is a new generation of high-precision weapons, which in their tactical and technical characteristics are superior to the existing domestic Scud-B, Tochka-U missile systems, as well as foreign analogues Lance, ATACMS, Pluton other.

The main features of OTRK type "Iskander" are:
· High-precision effective defeat of various types of targets;
· The possibility of covertly carrying combat duty, preparing for combat use and launching missile strikes;
· Automatic calculation and entry of a flight task for missiles when placed on the launcher;
· High probability of accomplishing a combat mission under conditions of active opposition from the enemy
· High operational reliability of the rocket and its reliability in preparation for launch and in flight;
· High tactical maneuverability due to the deployment of combat vehicles on all-wheel drive all-wheel drive chassis;
· High strategic mobility, which is ensured by the possibility of transporting combat vehicles by all means of transport, including aviation;
· A high degree of automation of the combat command and control process of the missile units;
· Fast processing and timely bringing intelligence information to the necessary levels of control;
· Long service life and ease of use.

The “Iskander” missile system in its tactical and technical characteristics fully complies with the requirements of the Missile Technology Non-Proliferation Control Mode. It is a "deterrent" in local conflicts, and for countries with limited territory it is a strategic weapon. The structure of the complex, its command and control systems, automated combat control and information support make it possible to respond quickly to new requirements without substantially modifying its combat assets and, as a result, guarantee it a long life cycle.

OTRK Iskander is integrated with various intelligence and control systems. It is capable of receiving information about a target assigned to a hitting from a satellite, reconnaissance aircraft or unmanned aerial vehicle (of the “Race-D” type) to an information preparation point (PI). It calculates the flight task for the rocket and prepares reference information for the rocket. This information is transmitted via radio channels to the command and staff vehicles of the commanders of the division and the battery, and from there to the launchers. Commands for launching missiles can come from the KSHM or from the command points of senior artillery commanders.