December 4 2021
2
Immerse yourself in history confrontation between the fleets of Italy and Great Britain with new material from the creators of World of Warships.


The Mediterranean Sea became one of the main theaters of military operations during World War II. Here the Italian Navy confronted the allied fleets Great Britain and France. Even before the outbreak of hostilities, these countries were building up the potential of their naval forces, realizing their importance in the near future.

However, by the summer of 1940, the situation had developed in a completely different way. Within 12 days after Italy entered the war, France surrendered. Now only the Royal Navy of Great Britain could resist the Italians. The main naval bases of the British were very distant from each other, and the communication routes passed dangerously close to the Italian coast. 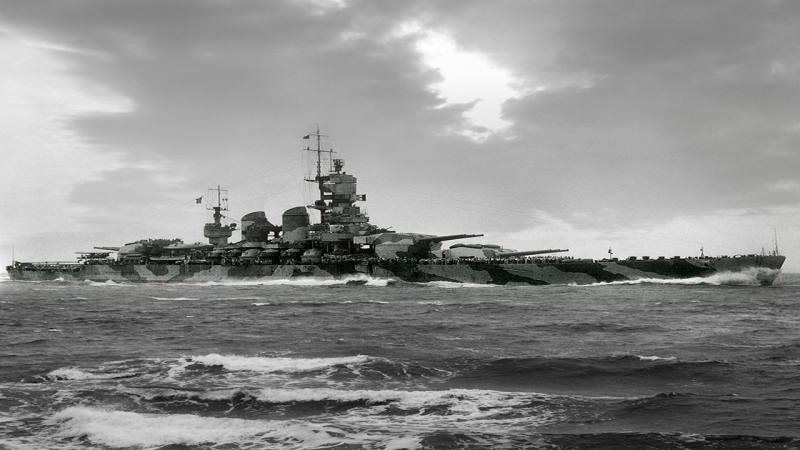 Italian battleship Vittorio Veneto
An entire operation was developed to escort each convoy in the British Admiralty. One of these, codenamed Collar, was hosted by the Royal Navy. According to the plan, it was required to conduct 3 transport ships, accompanied by 2 light cruisers, 1 destroyer and 4 corvettes, sailing from England through Gibraltar. One transport went to Crete, the other two to Malta. The entire route was split in two by a checkpoint at Cape Bon. In the first section, connection B provided security. It included the aircraft carrier Ark Royal, the battle cruiser Renown, 2 light cruisers and 9 destroyers. On the way to Alexandria, cover was provided by the forces of "Compound D": battleship Ramillies, 1 heavy and 2 light cruisers and 5 destroyers. Compound B with the convoy was to meet Compound D south of Sardinia. They then proceeded together to Cape Bon, from where Formation B and the main force of Formation D left for Gibraltar, and the convoy, accompanied by a light cruiser and 5 destroyers, proceeded to Malta. General command was carried out by Admiral James Somerville.

The Italians' reconnaissance worked pretty well: on November 25, the command received a report that a British squadron had left Gibraltar. Soon there was information about another connection in the area of ​​the island of Crete. The facts indicated that the Royal Navy was preparing for a major operation. The headquarters of the Italian Navy ordered the development of a retaliatory operation. A squadron under the general command of Admiral Inigo Campioni came out to intercept. It included the battleships Vittorio Veneto and Giulio Cesare and 7 destroyers. Another 7 destroyers escorted a squadron of 6 heavy cruisers. 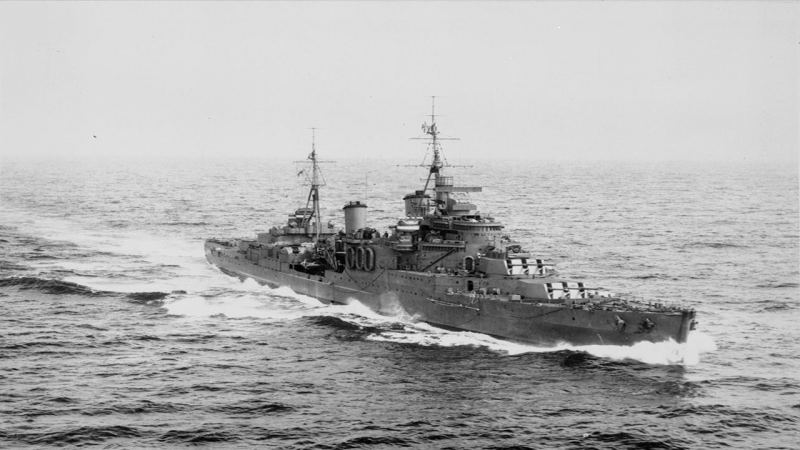 British light cruiser Manchester
The Italian fleet was to go to the area of ​​the island of Sardinia and there to intercept the British. On the morning of November 27, Campioni's squadron reached the checkpoint. Ejection aircraft began to take off from the ships for reconnaissance. At about 9:45 am, they achieved the result: a group of British ships was seen. Since, according to the pilot, she was inferior in strength to the Italians, Admiral Campioni went to intercept. Ahead were 2 divisions of heavy cruisers (3 ships in each) and escort destroyers. The battleships followed 12 miles to the northeast.

The British also noticed their opponent. A reconnaissance aircraft from an aircraft carrier transmitted information about the approach of a detachment of cruisers. Admiral Somerville was pondering his next move when word came in that Compound D was approaching. The balance of power was now roughly equal. At 12:00 this was reported to Admiral Campioni, who had an order to engage in battle only with complete superiority over the enemy.

At 12:07 the order was given from the flagship Vittorio Veneto to turn around and retreat. But during this time, both sides approached each other at a distance of about 15 miles. Admiral Somerville placed his cruising force ahead, followed by Renown and the destroyers. The slower Ramillies closed the formation, while the Ark Royal remained to maneuver south of the squadron, preparing to raise the torpedo bombers. At 12:16, visual contact with the British was established from the heavy cruiser Pola. 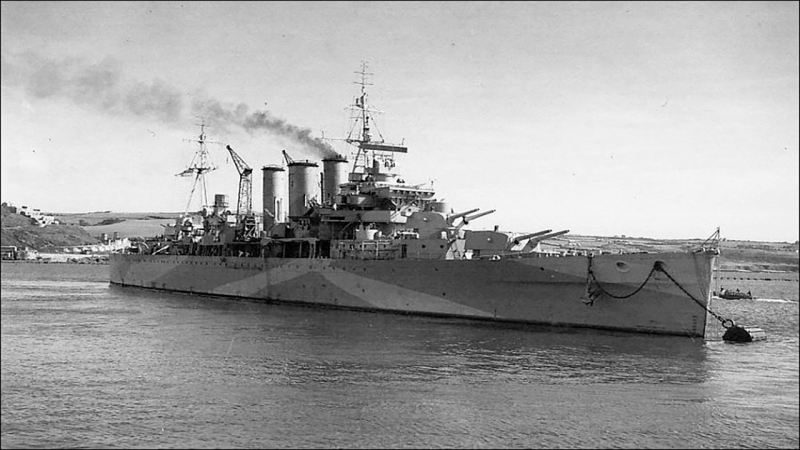 British heavy cruiser Berwick
At 12:20, the cruisers of the first division opened fire, a few minutes later - and the ships of the third. The firing accuracy turned out to be quite good, and the very first shells fell near the cruiser Manchester. Berwick followed him under fire. He was hit by 2 shells, but the cruiser did not leave the battlefield until the very end of the battle. In response, the British focused their fire on the nearby heavy cruisers Fiume and Trento. A couple of minutes later, large-caliber guns rumbled as well - Renown joined the battle. This enemy was beyond the strength of the Italians. The commander of the cruising squadron, Angelo Yakino, ordered a retreat, covered by a smoke screen. The British could not compete in speed with the Italians. Their only success was covering the destroyer Lanciere. He was hit by 2 shells from the light cruiser Manchester. Another destroyer, Ascari, took the damaged brother in tow.

At that moment, when the cruisers on both sides exchanged volleys, preparations were underway for the takeoff of air groups on the deck of the aircraft carrier Ark Royal. At about 12:40 pm, the first group of 11 Swordfish torpedo bombers appeared in the skies over the Italian squadron. Five aircraft targeted the heavy cruiser Fiume, while the remaining six attacked a larger target, the battleship Vittorio Veneto. The torpedo bombers entered the attack inconsistently, which allowed the Italian ships to avoid hits.

But then British light cruisers appeared within the reach of the battleship. Vittorio Veneto opened fire from a distance of 15 miles. The British, realizing that a more dangerous enemy was firing at them, began to set up a smoke screen. The battleship's shells landed fairly close, but there were no direct hits. After 10 minutes, the shooting stopped.

Admiral Campioni continued to withdraw the squadron from battle. Only a couple of destroyers remained behind, one of which was in tow. The commander of the third division of cruisers, Rear Admiral Luigi Sansonetti, requested permission to stay and cover the retreat of the damaged ships. The heavy cruisers Trieste, Trento and Bolzano guarded the destroyers for about 20 minutes, until it became clear that the British ships were not in pursuit. 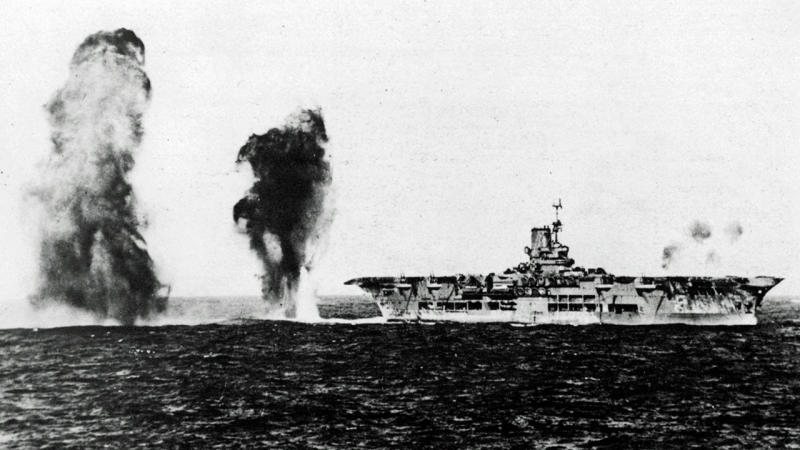 British aircraft carrier Ark Royal under attack by Italian aviation
The last attack on that day was carried out by aviation. Swordfish torpedo bombers and Skua bombers achieved only close explosions near the cruiser Bolzano. The Air Force summoned by Admiral Campioni attacked the British ships, but also unsuccessfully. On this, the hostilities on November 27 ended.

As a result of the battle, both sides did not lose a single ship. The heavy cruiser Berwick was damaged on the British side, and the destroyer Lanciere on the Italian side. If tactically the battle ended in a draw, then strategically it became the defeat of Italy. The Royal Navy was able to navigate the convoy, completing the assigned tasks.

Nevertheless, the squadron commander, Admiral Somerville, was summoned to London, where he testified before the commission. He was accused of indecision as he let the Italians go. But the admiral was acquitted. In turn, Admiral Campioni strictly followed the orders of the command - to protect the ships and engage in battle only with complete superiority over the enemy. With large forces, the Italians could force the battle on the British. However, Campioni believed that the British squadron was stronger and did not risk it. He was soon removed from office for being overly cautious in command. Thus, both commanders did not risk it, thereby missing the chance to defeat their opponent.

Although Italy had few successes at sea during the Second World War, the command's plans were ambitious. New methods of warfare and weapons were being developed. Watch Wargaming's video on the miraclearms the Italian fleet - the Maiale man-guided torpedo.