A fight with a shadow. Black Sea Fleet in the Great Patriotic War 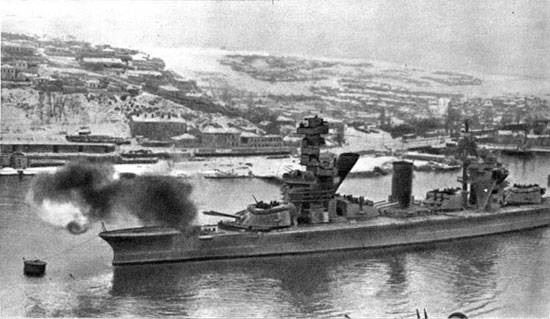 I must say right away that the Black Sea people fought heroically, especially on land. Defense of Sevastopol - the golden page of Russian glory weapons, landings on the Black Sea, that of Kerch-Feodosia, that of Novorossiysk, that of Mariupol, that others - a crazy risk and unparalleled heroism. But there were also nuances.


Let's start with the fact that sailors in combat on land is, of course, formidable and glorious, but they prepare them for something else, and they prepare them much longer and more expensive than infantrymen. Landing troops from random ships and vessels is also good, but there are special landing equipment, inexpensive and quickly built. And in general, the fleet must fight at sea. And especially the second (if not the first) fleet of the country. The Black Sea Fleet in 1941 is one battleship (out of three), five cruisers (out of nine), three leaders (out of seven), 16 destroyers (of which 11 are new), 44 submarines, two TFR, 87 torpedo boats, etc. .d.

There was complete order with the ships, the problem was with the enemy. Our eternal enemy - Turkey, of course, had the battleship Geben (Yavuz), but otherwise it was a rather sad sight: four destroyers, five submarines and two torpedo boats, with an extremely weak air force - not the kind of force that is capable of attacking our coast. There was also Romania - four destroyers, three submarines, three torpedo boats, and in theory Bulgaria - about a dozen torpedo boats and other rubbish.

Even if all these formidable forces together attacked the Soviet coast - one aviation The Black Sea Fleet (632 aircraft) would be enough so that there would be no military and civilian fleets left on the Black Sea (from the word - at all). Well, if suddenly Stalin's falcons missed, there was also coastal artillery. Only in Sevastopol the shores stored 8 - 305 mm guns, 4 - 203 mm, 15 - 152 mm, 6 - 130 mm and others with a smaller caliber. But Sevastopol is not everything, only 180-mm guns in the coastal defense of the Black Sea fleet there were 18 pieces, the equivalent of two cruisers of project 26. And also mines (three minelayers), anti-aircraft gunners and divisions allocated to cover the coast. I repeat - even without ships, this would be enough to carry out all the fleets of the Black Sea combined, and the pogrom of Constanta, and by DB-3 forces, in the amount of 61 pieces, and not only Constanta.

All these forces were not prepared against the Romanians and the Turks, of course, they were prepared for the Crimean War 2.0, that is, against the attack of the Anglo-French fleet. Until 1939, it made some sense, but after the outbreak of World War II, it completely lost. Our admirals also understood this, who began to prepare for the invasion of the Italian fleet, which will by all means abandon its grouping in Africa, leave its shores unprotected and rush to storm Sevastopol, and the Turks, who are squeezing the straits, will support him in this.

Everyone can assess the reality of such a scenario for himself, but he made his own contribution to the chaos of the first days of the war - the Black Sea Fleet set up minefields on the way to its bases.

“One of the first tasks for the Black Sea Fleet was, in accordance with the order of the People's Commissar of the Navy N. G. Kuznetsov, the setting of a defensive minefield in the Sevastopol region. The production began on June 23rd and ended on June 25th. In the Odessa area, a minefield was set up in accordance with the decision of the fleet commander. "
The only victims of this were the Soviet ships.

On the whole, of course, the Black Sea Fleet had tasks.

Still, the main task of the fleet in a purely land war is to support and supply its troops. The second is the landing of friendly troops and the reflection of the landing of foreign troops. The third is the evacuation of the encircled troops. The fourth is the interruption of the enemy's sea communications. The fifth is the destruction of enemy ships and the neutralization of enemy bases. The sixth is specific for the Black Sea fleet - support for the actions of the Danube Flotilla. The means for these tasks were, in contrast to the enemy, who had only the Air Force and gradually transferred by rivers and land what was possible - torpedo boats, landing barges, small and midget submarines.

The tasks were, the funds were at first, but with the nuances it came out as always.

And the first nuance is basing. Here, of course, there is not much to blame for the fleet - no one could have foreseen the option of losing most of the airfields and disabling the main base of the fleet in the first months of the war. Squashing aviation in record time - too. The fact that submarines will have to be used as transports is even more so. And the fact that only planes and mosquito forces would become the enemy of the ships did not fit in the head at all.

In 1941, the fleet coped with the first task by five with a plus - Odessa was supplied, the OOR was supported by the fire of large ships, when the Crimea was threatened, the whole Primorsky army was taken out unnoticed and practically without losses. Sevastopol was also supported and supplied uninterruptedly at first.

But 1942 was a frankly disastrous year, but what does the fleet have to do with it?

Ships do not live long without an air umbrella, it was not there. You can talk as much as you like about the fact that the garrison of Sevastopol was abandoned, but if sailors with ships lay down next to the soldiers and marines, would it change anything?

Evacuation without fighter cover was impossible, and we practically did not have long-range fighters, and there were no short-range ones either, in 1942 every pilot and plane counted. Again, if we had a mass of fighters, there would be no need to evacuate Sevastopol, it would have resisted. And what happens without air cover, was proved by the detachment of the captain of the 2nd rank of Negodos a year later, when the leader and two destroyers were easily drowned by dive bombers in the open sea.

As for the enemy's strategic landings, somehow it did not work out, in the absence of the enemy's fleet, but with ours - quite. The Black Sea Fleet landed landings regularly, successfully and where it was necessary for the command. All this was done without special landing ships and developments. Yes, there are a lot of critics of the landing in the same Kerch-Feodosiya operation, but the goal was achieved, as in other cases. Landings in general have become a kind of visiting card of the Black Sea people, unlike, say, the Baltic, where they, of course, were, but much more bloody and less successful.

With the evacuation of their troops, it was different: Odessa can be entered into textbooks, Sevastopol was not tried to evacuate, due to its complete impossibility. Likewise, with communications: they started cheerfully, from Italian tankers to Turkish schooners, but with the loss of the bases and the air force of the fleet, everything practically came to naught. And 1944, when the Germans removed 130 troops from the Crimea, is an undoubted failure. There were successes in the process, of course, but these are the successes of the pilots, the large ships never left the sea. Which is logical in its own way - after the loss of the leader and two destroyers in 000, they decided to take care of the fleet.

There was a problem with the enemy ships because of their absence, but the shelling of Constanta in 1941 was, however, for it it is necessary to put zero on a five-point scale. To lose a leader out of the blue is still necessary to be able to, the enemy did not suffer much. Rare raids on the Crimean coast also did not bring success, only losses. But the flotillas - both the Danube, the Dnieper and the Azov, fought heroically and performed a huge amount of combat work.

We are traditionally strong in improvisation and coastal defense, in contrast to the actions of heavy ships.

The result is strange - large warships on the Black Sea were not needed. There was not enough aviation, there were no electromagnetic trawls, there was also a shortage of escort and landing ships, and a battleship, two new cruisers (at least "Tashkent"), and a six-seven-U would look very good in Murmansk, not bad in Vladivostok, but not in Sevastopol. And it was possible to think of this long before the war: for the Grand Fleet or Regia Marina it was narrow, but for the Turks it was wide.

As a result, a full-fledged squadron fought with a shadow, occasionally shooting along the coast, for which the old cruisers with Noviks would have been enough, and since 1943 it peacefully sat at the bases.

There are no questions for the sailors - the Black Sea men fought heroically, perhaps, which is more effective than the Baltic, the question is for the command, which, clearly acting in line with tradition, overestimated the threat to the Black Sea and sharply underestimated for the Arctic, where the USSR Navy kept purely nominal forces. The experience of the Russian-Turkish war of 1877-1878, when, without a fleet, we completely reached Istanbul, was completely forgotten, but the scenario, in essence, repeated itself, except that the mine boats were replaced by aviation.

One positive thing - unlike Sevastopol during the Crimean War and Port Arthur, during the Japanese war, along with the main base, the fleet was not destroyed either.

Where does the question come from: Do you need powerful surface ships in closed theaters?