"Zircon" as a solution to the "Aleutian stranglehold" 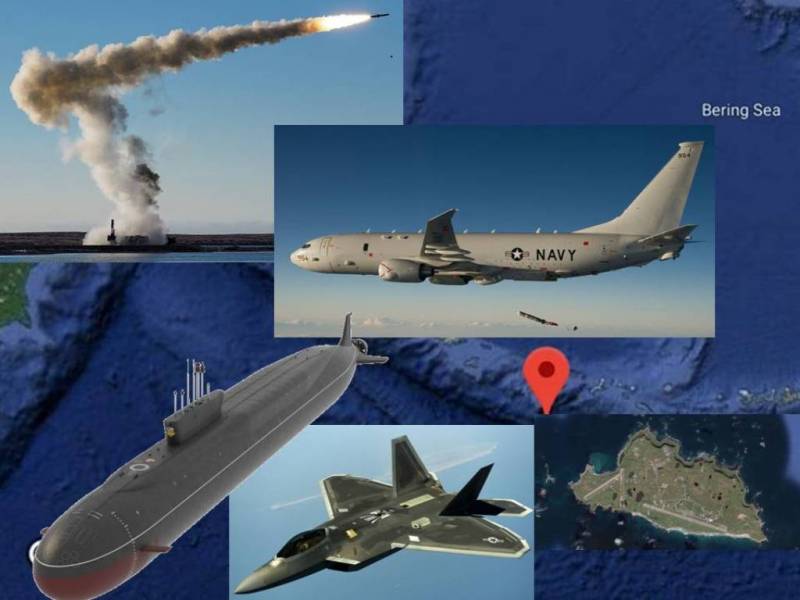 A quote from a recently sensational publication in our media: in Forbes (USA):

Erexon Air Force Base is so terrible that when US ground forces want to conduct combat training or exercises in the harsh cold climates, they often use it ... But for all its shortcomings, Erexon has tremendous strategic value.
... Not a single American airfield (we are not talking about aircraft carriers) can place fighters so close to Russia.
We are talking about the Erexon airbase on Shemiya Island (Aleutian Islands). 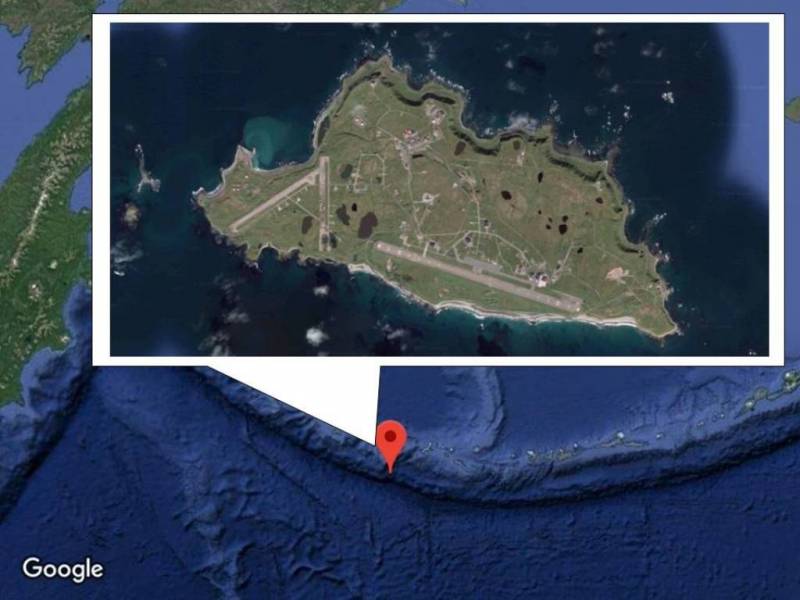 "Aleutian noose" or "pistol at the temple of Kamchatka"

Airfields, and in large numbers, appeared on the Aleutian Islands during the Second World War - as a result of active hostilities (including in this area) between the United States and Japan. 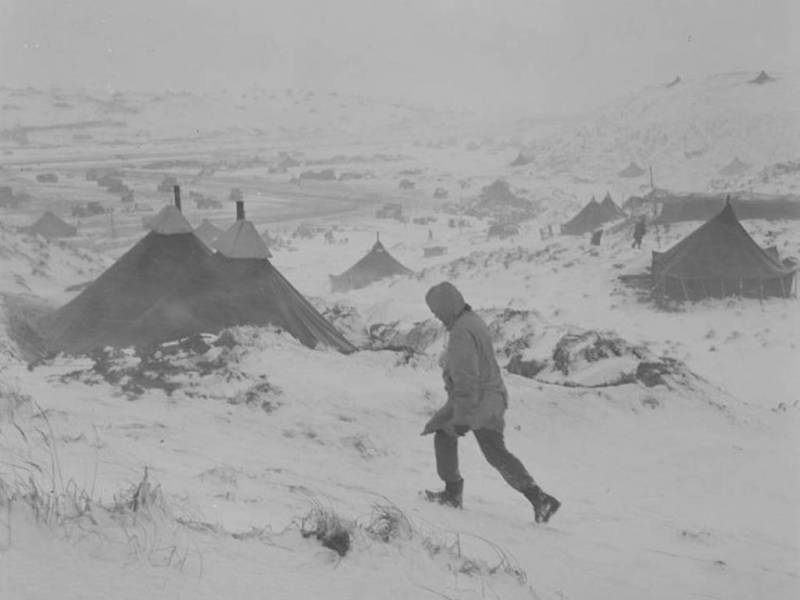 View of the American airbase in the Aleutian Islands during a blizzard (World War II)
Despite the extremely harsh conditions, the needs of the war forced them to actively develop the islands (turning them in fact into a single "Aleutian air hub").

The airfield closest to Kamchatka on Attu Island (now Casco Cove airport, was with the LORAN navigation station under the control of the US Coast Guard) is practically not used today. Moreover, living conditions there are considered so harsh that all BO staff lived in the same building and without families.

However, during the Second World War, both military activity and human life were in full swing there. 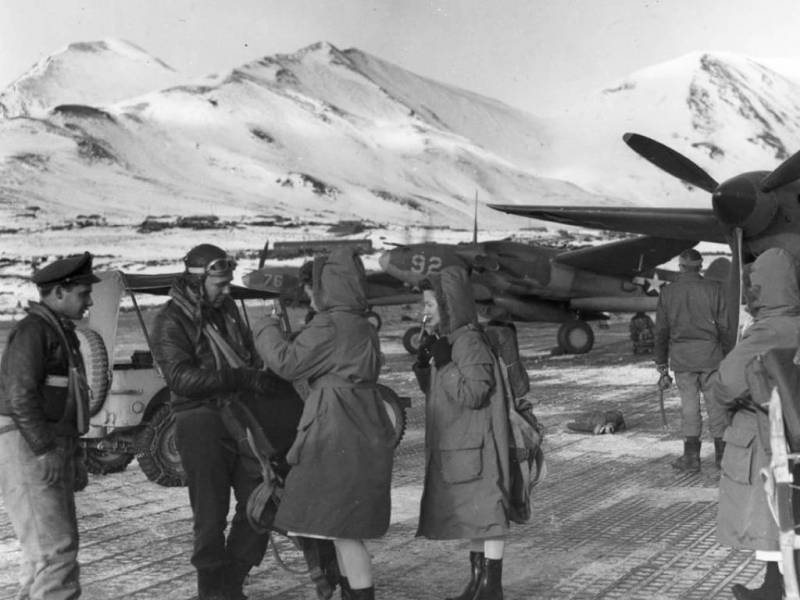 Pilots of the American 54th Fighter Squadron greet a group of army nurses at the airfield of Attu Island
The most habitable and developed among all the western Aleutian Islands was the former Shemya airbase (located on the island of the same name), which operated until July 1, 1994. Nevertheless, the airfield with a large runway (more than 3 km) is still owned and operated by the US Air Force.

During the Cold War, Shemya airbase was actively exploited by reconnaissance aircraft and base patrol aircraft of the P-3C Orion Navy.

Now in the United States, the question is again raised not only of the deployment of a strong group of anti-submarine aircraft on Shemie, but also of ensuring its cover with 5th generation F-22 fighters. Moreover, if necessary, a number of runways on the Aleutian Islands can be restored in a short time.

The goal of the United States is clear - the base of the Pacific Fleet and the NSNF Vilyuchinsk and the grouping of submarine forces deployed there (including the NSNF) of the Russian Navy. 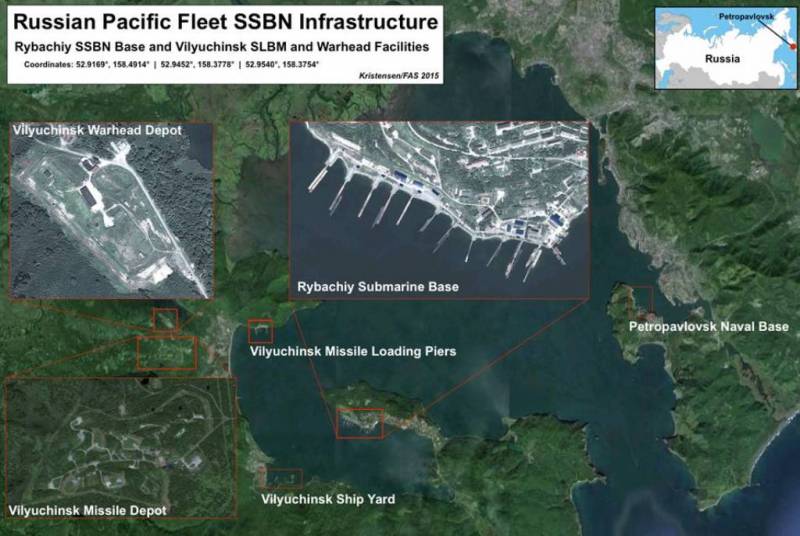 Strategic objects in the Vilyuchinsk area
Taking into account the distance to Vilyuchinsk just over a thousand km, the F-22 with Erickson are able to ensure reliable permanent air supremacy (the MiG-31BM, which has received a very limited modernization, will certainly not be able to withstand the F-22A). And not just in the northwestern part of the Pacific Ocean, but also over the waters of the Avacha Bay adjacent to the Russian Federation. And to ensure the work of modern patrol (countercurrent) aircraft P-8 Poseidon.

Three key factors of the "modern anti-submarine warfare system" that are worth talking about over and over again:

2. The active use of "backlight" (and using the most effective - very low-frequency (hundreds of Hz) range) and multi-position methods of working with anti-submarine aviation "So-called partners". 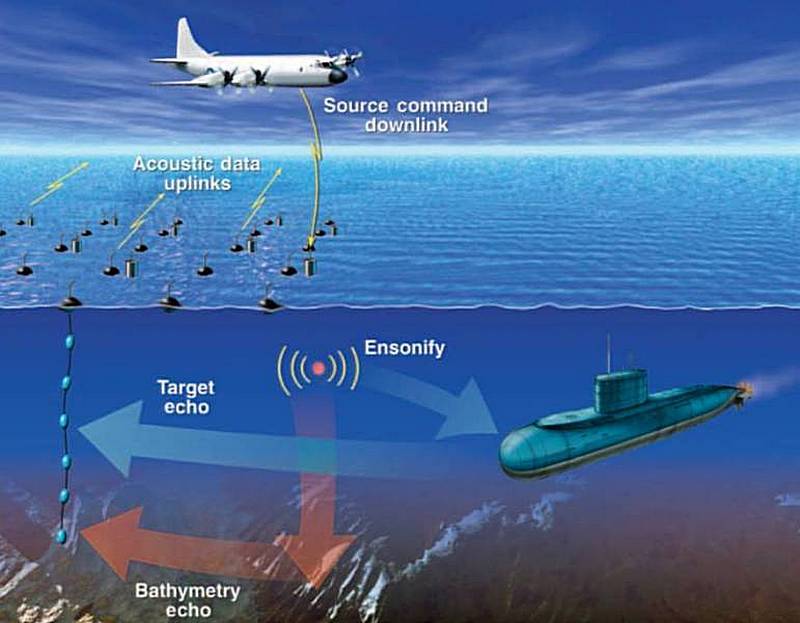 Why does the naval aviation of the Navy not have this?

The question is to the leadership of the Ministry of Defense and to the ex-chief of Naval Aviation (who appointed the head organization in the Russian Federation for patrol anti-submarine complexes "a firm" that had absolutely no experience in creating them, but in which he now "effectively found a job").

From the memoirs of the head of the department of advanced design of the Central Research Institute. Krylova A.M. Vasiliev about the deputy head of the USSR Navy, Admiral Novoselov:

... at the meeting he did not give the floor to the head of the institute, who was eager to tell about experiments to detect the surfaced trace of a submarine using a radar ... Much later, at the end of 1989 ,. asked him why he dismissed the question.
To this Fyodor Ivanovich replied as follows:
“I know about this effect, it is impossible to defend against such detection, so why upset our submariners? 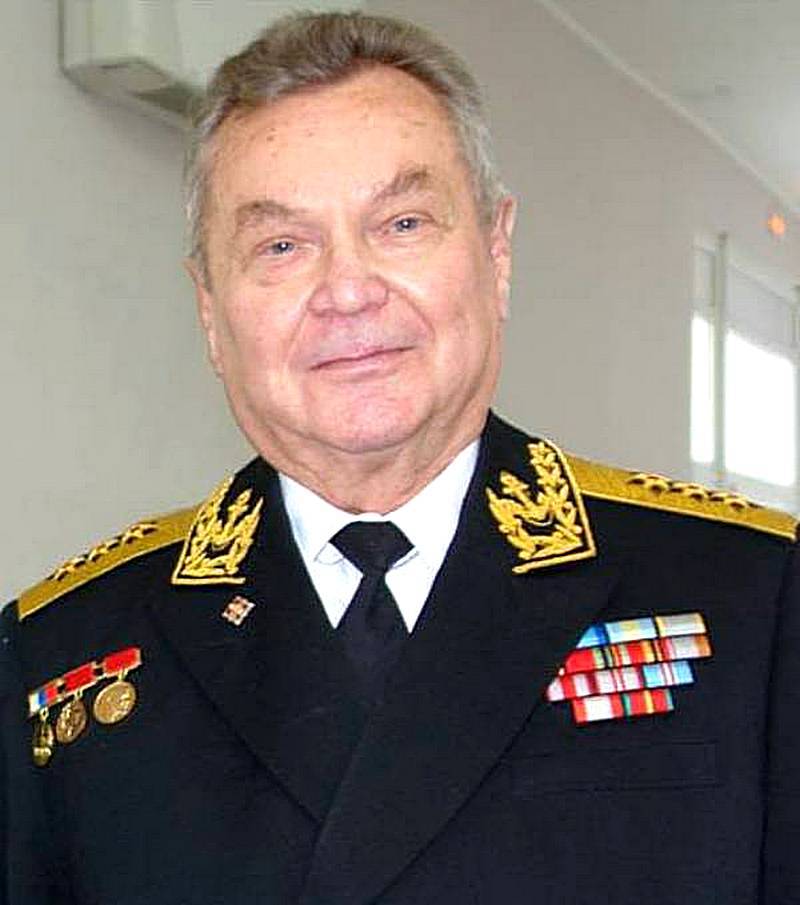 Admiral F. I. Novoselov
Note. According to those who knew Admiral Novoselov well, he was a very wise and experienced leader. It is worth recalling that a number of systems and complexes that have become the "brand" of the Russian Navy today were laid down under him. And he did not hide from the facts - it was under him that active work was going on, including on new means of search. It's just that the question of the submarine in the structure of the military-industrial complex of the USSR was "organizationally difficult." And here it was sometimes necessary to act, as they say, "on soft paws."

Conclusions: the threat of the US aviation group from Shemya is real. And the deployment of a strong air group (F-22 and P-8) is able not only to disrupt the deployment of submarines (of any forces) from Kamchatka, but also to call into question the effectiveness and expediency of Kamchatka's NSNF grouping.

However, there is a solution.

A stationary airfield with valuable modern combat aircraft is just the ideal target for hypersonic missiles. Given the severe restrictions on the GOS, they objectively have limited characteristics. And therefore, they require special high-precision target designation systems when used against mobile naval targets. Obviously, the requirements for such systems when firing Zircons will be much higher and stricter than those for Onyx (with a seeker with a much larger detection area).

However, the location of the stationary airfield is a priori known, and it is precisely for such objects that the use of hypersonic missiles will have a very high effect.

Taking into account the official statement about the possibility of using the Zircon anti-ship missile system from the standard 3S14 vertical launchers, it is logical to assume that there is a real possibility of its use from the Bastion coastal anti-ship complex (ABSCRK) (with its corresponding revision). 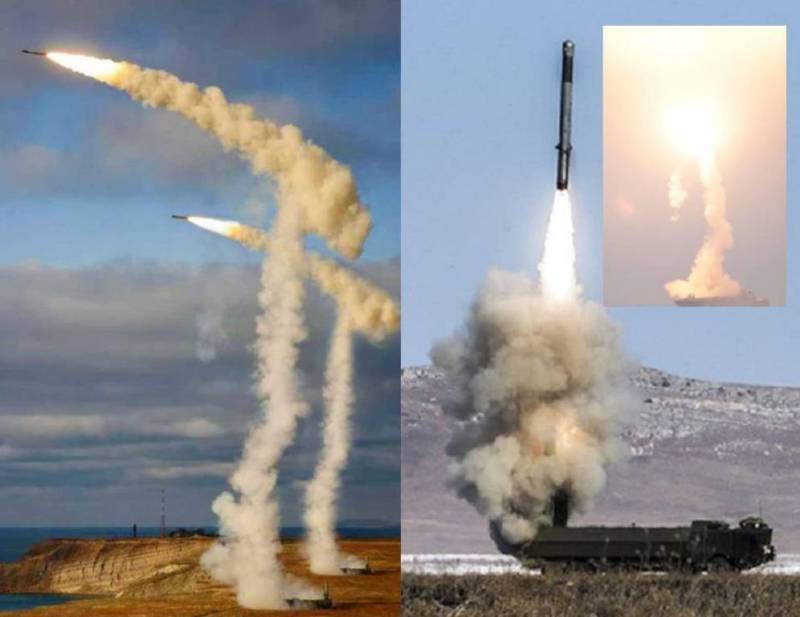 Accordingly, the use of the necessary (and not very large) outfit of Zircon hypersonic missiles at the Erickson airbase (Shemya island) from Kamchatka, with a very high probability, allows not only to destroy the airbase itself, but also very complex and expensive aircraft of the 5th generations. Taking into account this factor, the expediency of using hypersonic missiles (very expensive) for such purposes is quite justified.

Bastion has already been deployed in Kamchatka. "Zircon" is completing tests (it should be noted that for the destruction of stationary targets, it is advisable to modify it with a "simplified" control and targeting system to ensure a reduction in the cost of the rocket and the accumulation of the necessary ammunition).

And now the "inverted chessboard"

When analyzing the possibilities and effectiveness of new types and samples weapons, as well as the ways of its application, the "principle of the inverted chessboard" is of great value. That is, it is imperative to look at the situation from the side of the enemy. Moreover, not only from the point of view of countering our new weapons, but also the capabilities (new weapons) or methods of using them by the enemy. And sometimes the conclusions (with this approach) turn out to be quite unexpected.

In 2018, the US Army officially announced its ongoing development of a promising missile system with a Long Range Hypersonic Weapon (LRHW) hypersonic warhead. And already quite recently, some of its characteristics were publicly named: first of all, the range - 1725 miles (2775 km). 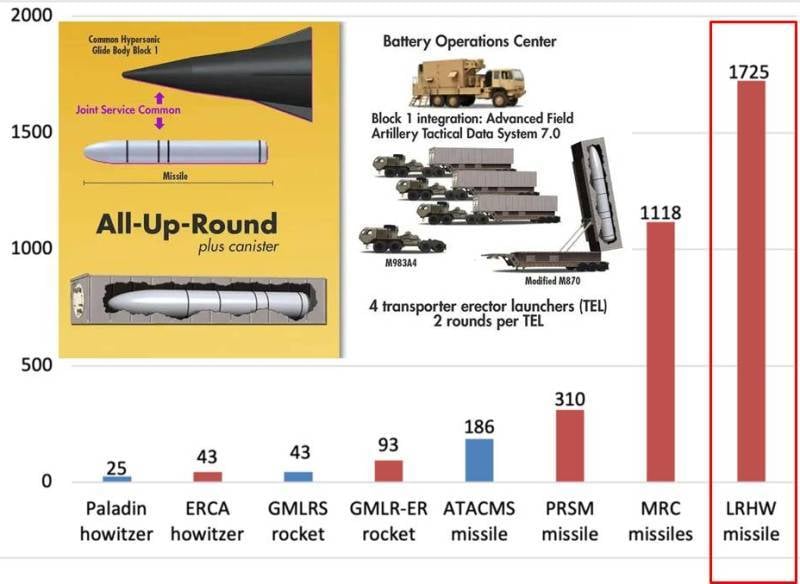 The statement about the delivery of the first LRHW missile system to the troops should be considered very optimistic. However, such work is being carried out in the United States and is very active. And now we can confidently assume that the United States will receive one or another hypersonic missile, and in the near future.

After that, questions arise about our goals. And this is not only Vilyuchinsk and Elizovo in Kamchatka, but also all the northern bases. Immediately I recall the scandalous photo from Hajiyevo in 2015 with the "group expectation" of enemy warheads, most of our strategic APCR in the "puddle" of a small base.

Yes, hypersonic targets go astray. And this success of our anti-aircraft missile system "Antey-2500" was officially and with legitimate pride reported back at the "Army-2020". However, only with special air defense systems and special and extremely expensive air defense systems.

In other words, we get a situation of "frontal military-technical and economic competition" with the enemy - many times stronger in the economy than we are.

Further, as already noted in the author's publications on "Zircon", he not only does not "zero" "mobile airfields", moreover, it significantly increases their value in a future war.

In fact, there are a lot of conclusions (and a discussion on them will be very useful, including with the participation of "smart amateurs" with a "fresh look").

One of the elementary questions: what about our other airfields in Kamchatka, taking into account the possibility (and its high probability) of putting Elizovo out of action?

We also had Pushchino and Lenino, capable of receiving heavy regiments of the Naval Missile Carrier and Long-Range Aviation? Only here at the airfields of these between the surviving slabs of the covering sometimes birches are already growing ...

In fact, all of our stationary objects in the front-line zone are becoming targets of destruction. Moreover, the objective air defense capabilities deliberately exclude the possibility of reliably covering any significant number of them.

And this is not a distant “sometime later”, but a very specific “tomorrow”. Literally in 4-6 years.