The myth of the "stupid cavalry" Voroshilov 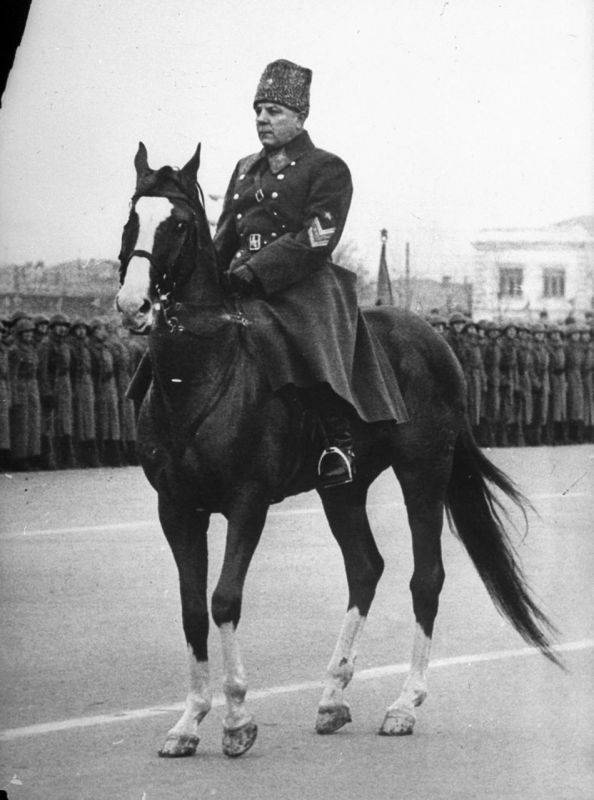 140 years ago, Kliment Efremovich Voroshilov was born, statesman and military leader, Marshal of the Soviet Union. A man who has come a long way from a simple worker to the People's Commissar of Defense of the USSR, always devoted to the Motherland.

Born February 4, 1881 near Lugansk in the family of a poor worker. Clement knew hunger as a child and begged for alms with his younger sister. From a young age he worked as a shepherd and miner. He had no opportunity to get a good education - two years in a zemstvo school. Became a worker. Since 1903 in the Bolshevik Party. Leader of the Lugansk Bolshevik Committee and the Lugansk Soviet.

The usual career of the then revolutionary: organizer of strikes, prison, training of military squads (during the First Revolution), underground activities, multiple arrests and exile. He spent several years in exile in the Arkhangelsk and Perm provinces. During the First World War he worked at the Tsaritsyn artillery plant, was exempted from conscription. After the February Revolution he returned to Lugansk.

Member of the October Revolution, one of the organizers of the All-Russian Extraordinary Commission (VChK). In 1918, at the head of the red detachments, he defended the Donbass from the Germans, then became commander of the 5th Army of the Red Army. After that, he commanded the Tsaritsyn group of troops, together with Stalin distinguished himself in the defense of Tsaritsyn. Here Voroshilov and Stalin repulsed the "attack" of Trotsky, who tried to oust them. Then Kliment Voroshilov was a member of the Military Council of the North Caucasian Military District, assistant commander and a member of the RVS of the Southern Front, commander of the 10th Army. 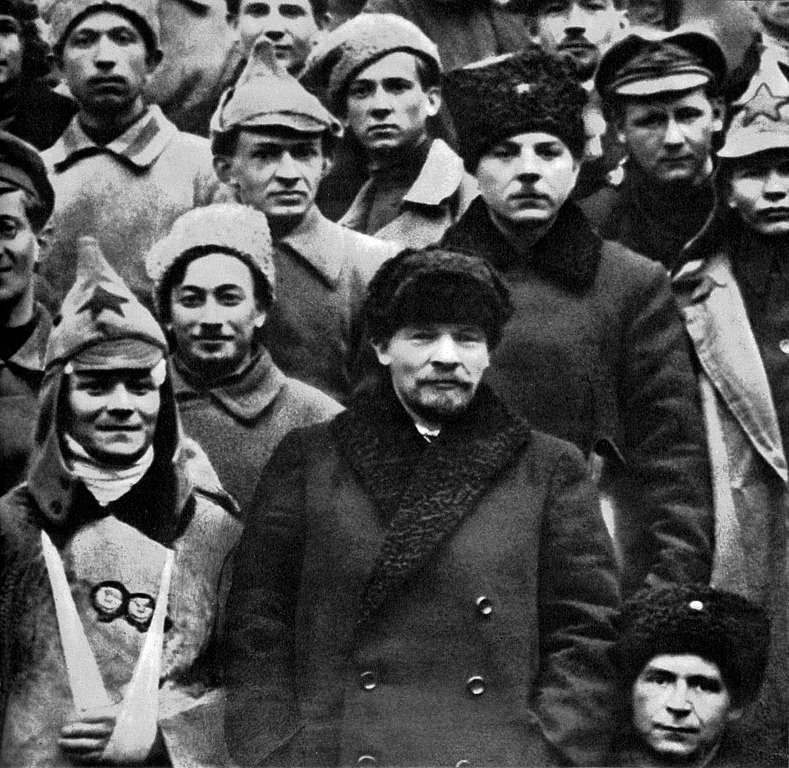 V. I. Lenin and K. E. Voroshilov among the delegates of the X Congress of the RCP (b) - participants in the liquidation of the counter-revolutionary insurrection in Kronstadt. 1921 g.

People's Commissar of Defense and Marshal of the Union

Under the leadership of Kliment Efremovich, a tremendous amount of work was done to reorganize and build the Armed Forces of the USSR. He carried out work on technical re-equipment, development and expansion of the military education system, training and education of troops. He took part in the pre-war "purge" of the army.

During the years of the dominance of liberal myths, repression in the Armed Forces was assessed only negatively. However, then detailed, factual materials appeared that show that the "purge" of the army led to the improvement and strengthening of the USSR Armed Forces. The military opposition (part of the "fifth column"), which, during Hitler's attack, was supposed to raise a rebellion against Stalin, was eliminated, and the cadres were rehabilitated.

The Soviet command made a number of mistakes in the training of troops, including in their technical readiness. This affected the course of the Finnish campaign of 1939-1940.

During the Great Patriotic War, he was a member of the high command: a member of the State Defense Committee (GKO), Headquarters, led the troops in the northwest direction, the partisan movement.

From April 1943 he headed the Trophy Committee. The trophy service played an important role in the collection of captured equipment, weapons, ammunition, fuel, scrap metal and other valuables, as well as in helping the population freed from the Nazis.

After the war, Voroshilov continued to be a member of the top leadership of the USSR.

He was buried in Red Square in Moscow near the Kremlin wall.

Even during the life of the Marshal, Lugansk - Voroshilovgrad was named after him, two Voroshilovsk and Voroshilov (Ussuriysk) appeared. 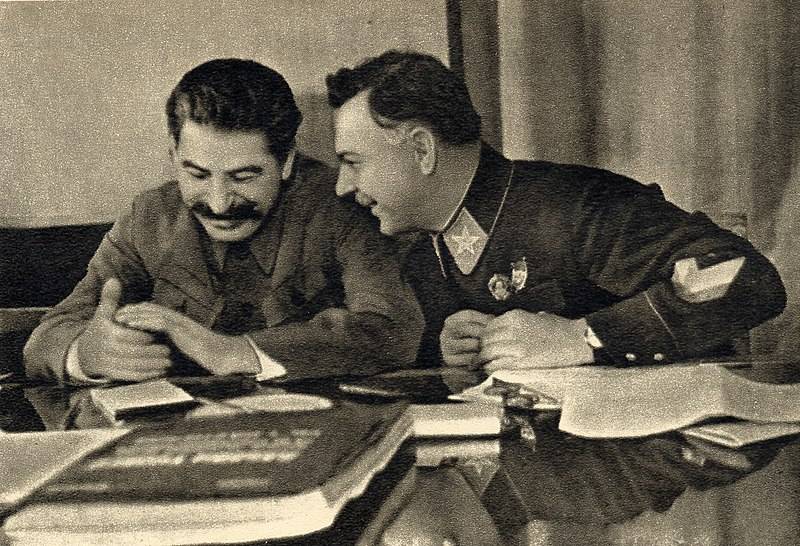 General Secretary of the Central Committee of the All-Union Communist Party of Bolsheviks I. V. Stalin with Marshal of the Soviet Union K. E. Voroshilov in 1935

Opinions of contemporaries about the marshal

The leader of the revolution had a low opinion of

"Voroshilov-Balalaikin".
Obviously, the difference in the social origin and living conditions of the two revolutionaries affected. Clement was a beggar in childhood, begged, then a proletarian, did not receive a good education. However, Lenin valued Voroshilov for his unwavering proletarian loyalty to the party, communist ideals and the people. It did not have a "double bottom" like many revolutionaries who came from abroad. In boots, a cap and a blouse under a cheap coat was a devoted man, a favorite of the workers and a bright orator from the people.

Stalin's Foreign Minister Molotov was not a friend of Voroshilov, but he also noted the loyalty of the People's Commissar of the Party and personally to Stalin. Although Kliment Efremovich could express his personal opinion, as it was in 1927 about the policy in China. He was distinguished by bright and crushing peasant-proletarian simplicity in speeches.

Stalin's choice in favor of Voroshilov when he was appointed head of the USSR Armed Forces is quite understandable.

He followed Lenin's logic. Joseph Vissarionovich knew Clement well, was disposed to him. Unlike the same Frunze, Voroshilov did not have a political instinct, a talent for a commander and military erudition. But unlike Trotsky, he was devoted to Stalin, the party and the people. He helped to defeat the "fifth column" in the country, which was one of the main reasons for the Great Victory.

He made up for the shortcomings with great dedication, energy, efficiency and hard work. Having made his way from a simple worker to the People's Commissar of Defense, he retained his simplicity and sincerity, while greatly growing intellectually. He created the country's new Armed Forces, traveled among the troops, conducted exercises and conferences. With all his might, he consistently and methodically built up the might of the Red Army. The troops respected and loved him. 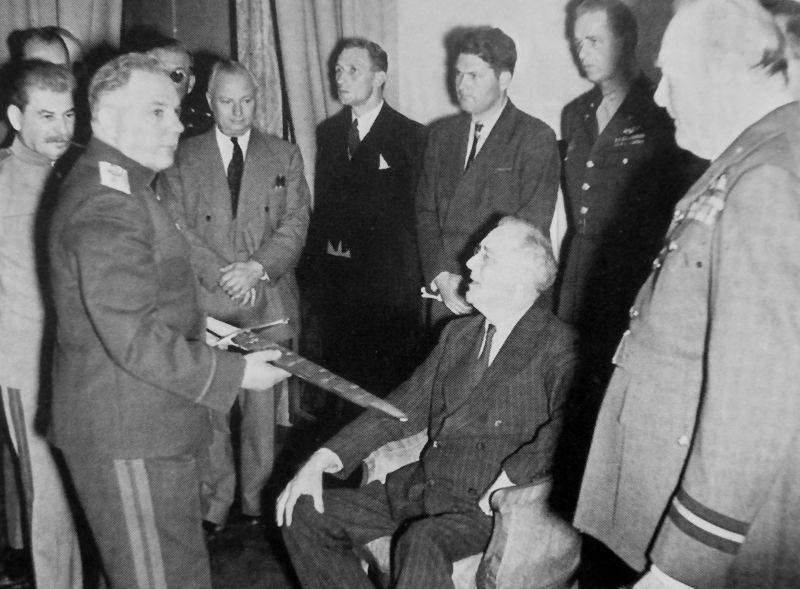 In perestroika and democratic Russia, a myth was created about

"Stupid cavalry"
Voroshilov and Budyonny, who allegedly clung to the outdated experience of the Civil War, fettered the development of the USSR Armed Forces, hindered their mechanization and put “outdated” cavalry in the first place. That was one of the reasons for the most difficult defeats of the Red Army in the initial period of the war.

In particular, Voroshilov was quoted at the 1934th Party Congress in January XNUMX:

"It is necessary ... once and for all to put an end to the wrecking 'theories' about replacing the horse with the machine."
However, this is a phrase taken out of context.

In addition, the People's Commissar spoke about the horse population in agriculture, and not about the army. The point was that, despite the mechanization of agriculture, the need for which no one denied, a horse is still needed in the village.

And in the section devoted to the Red Army, Kliment Efremovich said something different: not a word about cavalry. And a lot about

"War of motors".
The People's Commissar noted the need for forced motorization, mastering the production of new motors.

In 1940, there was a large reduction in cavalry in the army: in 1937 there were 7 cavalry departments, 32 cavalry divisions (of which 5 mountain cavalry and 3 territorial), 2 separate cavalry brigades, 1 separate and 8 spare cavalry regiments.

Instead of the disbanded cavalry divisions, they created tank and mechanized.

In early 1941, the People's Commissar of Defense Timoshenko and the chief of the General Staff Zhukov presented Stalin with a note outlining the scheme for the mobilization deployment of the Red Army. On its basis, on February 12, 1941, a draft mobilization plan was prepared. According to it, the army had 3 cavalry directorates, 10 cavalry and 4 mountain cavalry divisions, as well as 6 reserve regiments.

The total number of cavalry was reduced to 116 thousand people.

This plan was even exceeded. And by the beginning of the attack of the Third Reich, only 13 cavalry divisions remained in the Red Army.

The war showed that the reduction in cavalry was rushed.

The importance of cavalry in the modern "war of motors" has been underestimated.

In Russia, with its vast expanses, the lack of good roads and large forests, it was the cavalry that turned out to be a very effective branch of the army.

Horses were transport (horse-drawn) that perfectly suited Russian conditions. They had better cross-country ability than German cars and armored personnel carriers and did not require fuel. They could act in muddy roads and snowfalls.

The cavalry was used for reconnaissance, raids on the rear of the enemy, violations of communications in order to disorganize the control and supply of the enemy, and to strengthen the partisan forces.

Also, in the conditions of the weakening of the armored forces in the first period of the war (heavy losses), mobile units were required to develop the first success of offensive operations, break into the deep rear of the enemy, create "cauldrons".

By the end of the year, there were already 82 light-type cavalry divisions (without tanks, divisional artillery, anti-tank defense and air defense, sappers and rear services).

In 1942, the cavalry divisions were reduced to corps, which (in the place with tank corps and armies) played a large role in the defeat of the Wehrmacht.

Tanks and cavalry complemented each other perfectly.

In addition, the cavalry corps, which did not require many tons of ammunition and fuel, could advance deeper than motorized formations.

And finally, they could easily do without good roads. Moreover, they even knew how to fight without them at all.