Well, we are not 41 years old, and the war is not on our territory

Our country is at war. In Syria, it is open. Where not only terrorists, but also their allies are fighting against us without hiding. There are other wars, secret, but no less important.


There are those who solve problems on these fronts with their blood and lives. And there are "so-called military" who

"The war (which the country is waging) stops at the end of the working day."

And it is not at all a fact that the former influence the situation more strongly than the latter.

Prologue. From a book about war

For the 40th anniversary of Victory (1985) a large series of books was published in the USSR - collections of memoirs of living veterans with many vivid details.

One of the most disturbing to the author (then a student of the USSR) was the memories of a simple driver of a lorry, where there was an episode of the first battles in the Crimea in 1941. Arriving from the front line to the ammunition depot near Simferopol on Sunday, he was faced with the fact that the warehouse manager had a day off.

The issue was eventually resolved, a lorry with shells for artillery went to the isthmus to the fighting troops. But the example of "peacetime psychology" (in a country that had fought to the death in a terrible war for several months) was very striking.

Report to the Minister of Defense of the Russian Federation.

Taking into account the problematic issues of conducting hostilities in the Syrian Arab Republic:

• their high cost, and the need to limit it without reducing combat effectiveness;

• limitations of resource indicators of videoconferencing equipment (aircraft and helicopters);

• the need to conduct continuous round-the-clock reconnaissance in the theater of operations - both terrorists and the activities of "so-called partners" (VGK);

• strict requirement of high-precision application weapons Videoconferencing, with documentation of the results of strikes;

• the need to ensure a quick response to changes in the situation (delivery of high-precision strikes of the aerospace forces in the shortest time);

• the need to constantly maintain the network of retransmission and control of the UAV over the entire theater of operations, providing a decisive role in opening and monitoring the situation.

It is proposed to create, in a short time, a reconnaissance and strike system with a low operating cost, designed to solve problems:

• retransmission and control of UAV actions over the entire theater of operations;

• operational analysis of the ground situation, generation of control center data with ensuring its operational transmission for aircraft with the Hephaestus system;

The implementation of these tasks is proposed at the expense of a constantly functioning system (complex) from a group of at least 6 aircraft (with a constant presence in the air of at least 2 aircraft) M-101T "Gzhel" (development of the Myasishchev EMZ) with small-sized means of PP, RTR, control and retransmission of UAVs, means of reception and transmission of the control center to VKS aircraft with the Hephaestus system.

An increase in the number of M-101T aircraft (there are sufficient numbers in storage) as part of the complex allows for constant patrolling of 3 pairs of M-101T over the areas:

The proposed system (complex) in terms of RR and RTR is an improved analogue of the US Armed Forces systems of the Guardrail type with significant superiority in combat capabilities due to the inclusion of UAVs and means of generating and transmitting the control center into the complex.

06.12.2016 years
Earlier, the author has repeatedly addressed reports on a number of issues of the country's military security. And in a number of cases this had consequences.

At the very beginning of our operation in Syria (due to the fact that at that moment we were still officially “not there”, on the advice of the “senior comrades” the addressee was changed from the Chief of the General Staff to the “Senior military adviser in the SAR”) along a number of problematic issues of our group there.

Then there was a call from a friend:

You “have nothing to do” [another expression was used], what are you writing to NGSH?
The same person calls a few months later:

“Thanks for writing. We made it in time. "
The phrase referred to a problematic security issue, but on which they worked out in a timely manner. And they managed to close it (before the enemy who was preparing for this could take advantage of it).

The "brain organ of war" in our Armed Forces is the General Staff (General Staff), and in it - the Main Operational Directorate (GOU). Accordingly, questions about belonging went to them.

The above report was sent by the author to the e-mail address of the Minister of Defense's reception on the morning of December 6, 2016 (about its background - below). At the same time, there was complete confidence that he would leave as belonging to the GOU GSh.

However, two days later, with amazement and indignation, I learned that he had been signed off to the GUNID (General Directorate of Research Activities).

"We have GUNID engaged in the war in Syria ?!"
I immediately contacted some of the chiefs and heard:

“Of course, his [report] to the GOU is necessary, just the GUNID was turned into an“ office for replies ”.

On December 8, ISIS launched a surprise offensive against Palmyra, liberated in early 2016, by December 10, the Syrian army (and Russian advisers) retreated to T4 airbase, leaving the city. 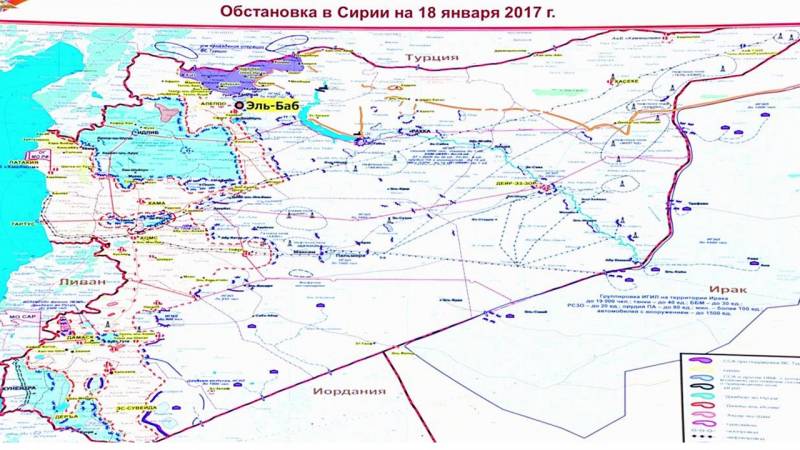 The situation at the beginning of 2017 (after the loss of Palmyra).
Of course, this defeat was primarily due to the failure of our intelligence. And first of all, because it did not have all the necessary technical means to solve the tasks at hand.

The enemy, beaten from the air, managed to covertly concentrate and deliver a sudden powerful blow (such that there was a question about the possibility of losing not only Palmyra, but also T4), largely due to the extreme lack of long-range reconnaissance means in our grouping.

If the near zone was effectively "closed" (first of all, by the best tactical UAVs of the early 2010s "Orlan-10"), then the far zone - only occasionally and periodically could "look" by the "Outposts" (with a number of serious restrictions on the capabilities ).

Had the report hit the GOU GSh on December 6, the planes would not have had time to collect and transfer, of course. But the operators of the GOU could "stab":

“When did we have the latest intelligence data from the Rakka-Palmyra region?
Perhaps there would have been sorties of the "Outposts" that could have exposed the concentration of the enemy strike group?

The impetus for the emergence of the idea of ​​creating such a system was a significant redistribution of funding for defense spending associated with the conduct of hostilities in Syria. Accordingly, there was an urgent need to search for such "instruments of war" that would have a moderate cost and high efficiency.

In 2016, the United States published a number of its documents on the costs of the operation against ISIS in Iraq, including with extremely interesting conclusions and estimates of the cost of operation. aviation technology. The diagram below illustrates this: 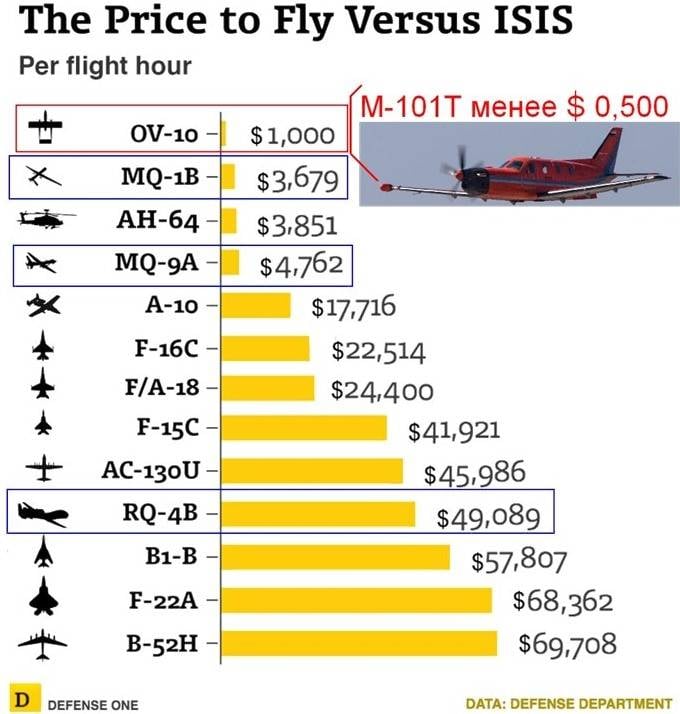 The M-101 "Gzhel" turboprop aircraft, which we had in significant quantities (in storage), had an even lower cost of the flight.

Of course, this is far from the ideal aircraft choice for such tasks. And the main drawback is one engine.

In this regard, the question of using the L-410 light turboprop aircraft (with two engines) already available to the Ministry of Defense has been repeatedly raised.

However, for the conditions of Syria, this was by no means possible. The idea was to create a permanent "air reconnaissance umbrella" over key enemy areas. L-410 had insufficient flight altitude - in the zone of destruction of enemy air defense systems. That is, their shooting down in such conditions was only a matter of time.

Yes, I would like "the same, but twin-engine." But "Gzhel" has already been. And in the required quantity. They went into storage for a purely "bureaucratic reason." At the same time, the “similar military normative document” did not contain this “flight brake”.

The developer raised and refined the data on the operating time of all boards, on average they amounted to about 500 hours (that is, 5% of the resource). However, one of the most serious "bureaucratic obstacles" was the very possible procedure for transferring these aircraft to the Ministry of Defense.

At the same time, it is necessary to note and emphasize once again the fairly widespread use of light turboprop aircraft in the west for solving various military tasks.

“The war is not on our territory. A promising system is planned "

On December 27, 2016, absolutely unexpectedly, the response to the report came: 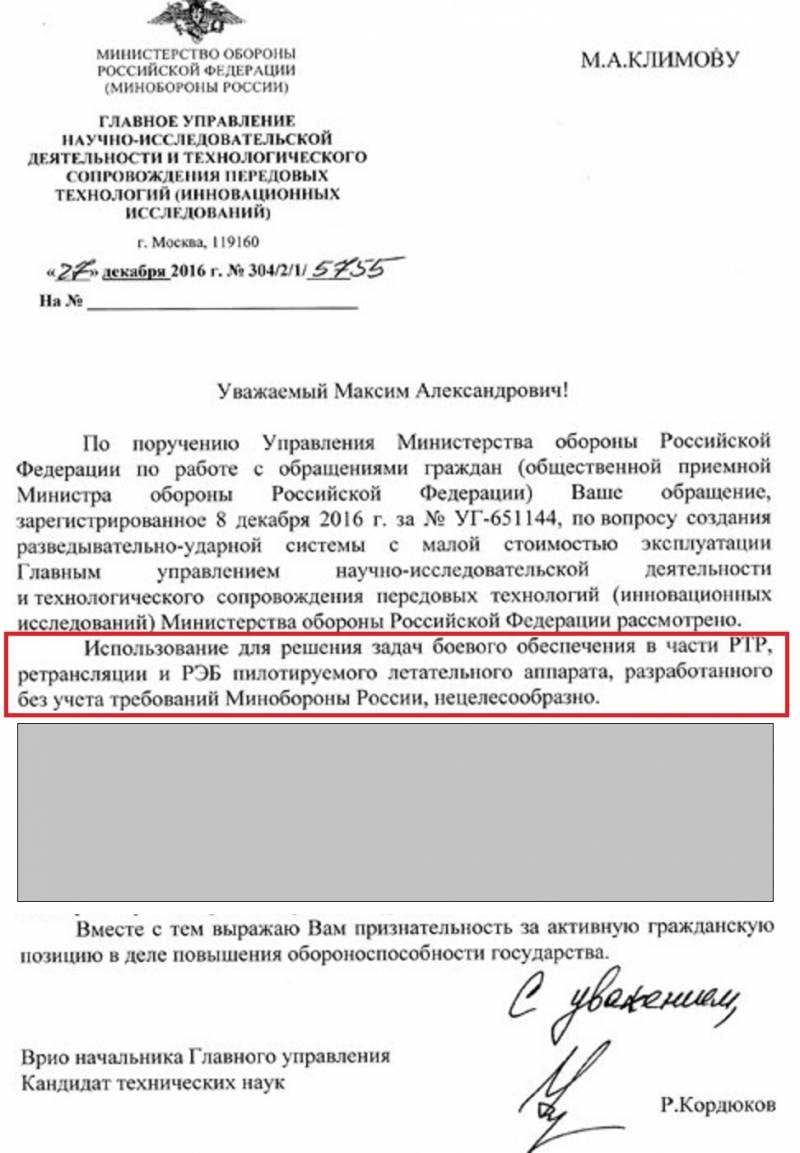 Since the artist was indicated on its back, I immediately called him back.

"A promising unmanned system is planned."
Here it is on the diagram: 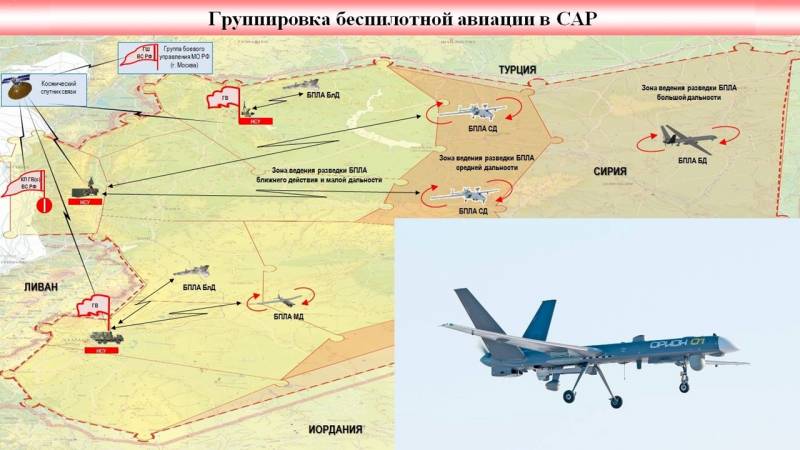 But only the tasks need to be solved “now and yesterday” (not to mention the fact that there are very critical assessments of the appearance of this promising system). Its first set was purchased by the Ministry of Defense only in 2020.

And the most "beautiful" (in quotation marks) phrase of the objected lieutenant colonel (on "tasks need to be solved now") was:

"Well, we are not 41 years old, and the war is not on our territory" ...
That is, there is a war going on. There are those who solve problems with their blood and lives. And there are the "so-called military", for whom "the war (which the country is waging) ends with the end of the working day." (They also "planned" - "a promising system for a bright tomorrow").

Well, and the last example to the question of "the failure of aerial reconnaissance near Palmyra." As, so to speak, an epilogue: 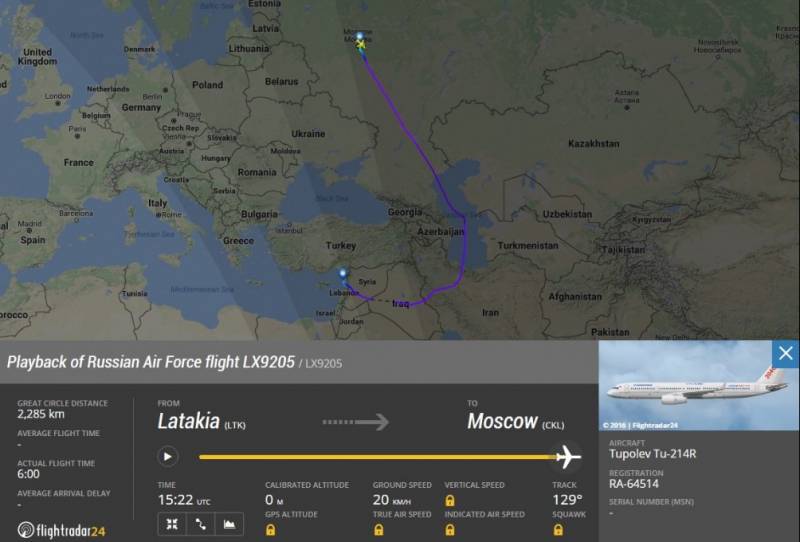 Flight track of Tu-214R aircraft from Khmeimim to Chkalovsky 09.12.2016 (c) www.flightradar24.com / twitter.com/galandecZP
They "flew to the war" ("for a medal" and an entry in the personal file). “For reconnaissance” (in quotes) - with the transpoder turned on (that is, anyone, including the enemy, could observe the location of the aircraft in real-time on flightradar24.com).

Ctrl Enter
Noticed oshЫbku Highlight text and press. Ctrl + Enter
We are
A great interview with Sergey Lavrov: about Ukraine, Obama and IranWhat you didn't want to know about England
Military Reviewin Yandex News
Military Reviewin Google News
157 comments
Information
Dear reader, to leave comments on the publication, you must sign in.