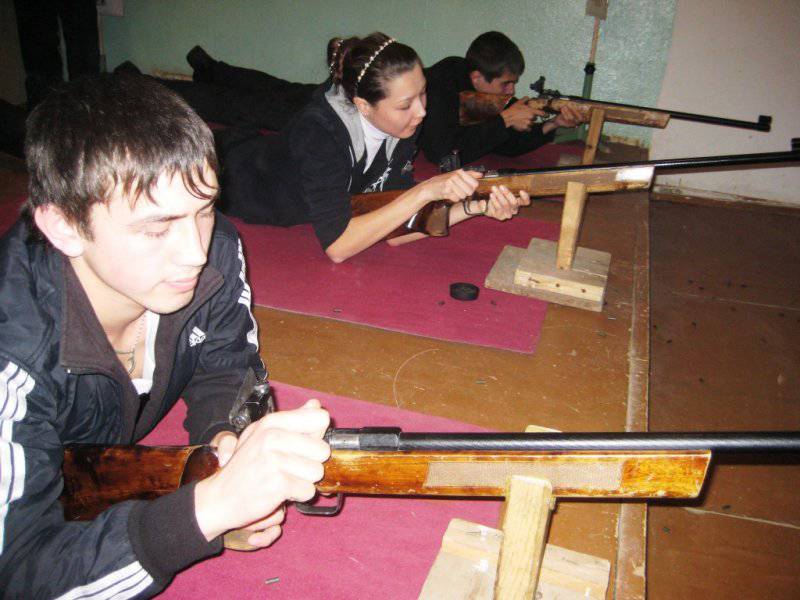 Beginning in the 20s, agitation was widespread in the Soviet Union to strengthen military-patriotic work among the population of the young state. Volunteer Friends of the Air were organized fleet, friends of the chemical industry. In the circles of these organizations, the population mastered the foundations of military tactics and strategy, and learned how to use rifle weapons, grenade, machine gun, artillery weapons, studied the basics of control tanks, armored vehicles, communications, mastered methods of protection against the action of chemical weapons.

Societies have become centers for the promotion of military knowledge among a wide range of the country's population. The state needed to strengthen the navy - naval clubs were created to train the necessary personnel. It was not enough to build aircraft to form the Soviet air fleet. OSOAVIAHIM voluntary society launched aviation propaganda, which made it possible to create flight personnel for the air force and civil aviation in the shortest possible time. The high level of instructors is indicated by the fact that Valery Chkalov was one of the mentors of the glider school in Leningrad. The flight organized by AVIAHIM in European countries is associated with the name of test pilot M. Gromov. This flight over a distance of more than 7 thousand km. proved the ability of the country of the Soviets to create and successfully master modern air equipment. It was from these clubs, circles, and flight schools that the path of our illustrious aircraft designers A.S. Yakovlev, O.K. Antonov, rocket engineer S.P. Queen, creators of helicopters N.I. Kamova and N.K. Skrizhinsky. On the account of members of the defense society, the development of flights on airships and stratospheric balloons. Thanks to the popular support of a voluntary defense society, the Soviet state became a leader in aeronautics. The country is proud of the pupils of the defense society, who during the years of the war, through their training and will to win, helped the country to stand against the most powerful and cruel enemy - fascism. Among them are A. Pokryshkin, I. Kozhedub, A. Maresyev, V. Talalikhin and many others whose names will forever remain in the memory of posterity symbols of courage, stamina and heroism of the Soviet people. In the battles participated registered Osoaviahim battle squadrons. A voluntary defense society also performed its work during the war years: 9 million people were trained in various structural divisions of the company in military specialties (more than 60 thousand sailors, 90 thousand aviation specialists, 140 thousand snipers, 270 thousand tank destroyers, 1 million machine gunners and machine gunners).

Now we can say with confidence that the voluntary defense society has successfully completed its tasks in preparing the population for military actions. After the war, the tasks before voluntary societies were adjusted to reflect the new conditions of life of Soviet society. The emphasis was shifted to the organization of sports work, the training of motorists, radio operators, although the work on the preparation of future draftees for military service was continued. To optimize the structure of societies in 1951, all divisions were merged into a single, called DOSAAF USSR. The main task of the society was propaganda and training in the military, military-technical specialties, including training for the aviation industry and the Navy. One of the important activities of DOSAAF was the training of personnel for the national economy: more than 10 million people received training in programs prepared by specialists of the company. DOSAAF is rightly proud of not only military personnel, but also outstanding sports achievements of its students. In support of the army, aviation and navy DOSAAF in 1977, he was awarded the country's highest award - the Order of Lenin. Training in military disciplines was carried out in pursuance of the state defense order. DOSAAF had a good material and technical base, a sufficient number of real estate objects were transferred to the society in all regions of the country. For example, training in aviation sports was carried out at 100 equipped bases, 450 training centers included automobile, radio, sea schools, and more than 2 thousands of clubs in military-technical disciplines functioned.

The country's leadership is well aware of the fact that due to the fundamental changes that have occurred in the country, a revision of the goals and objectives of DOSAAF is necessary. For a long time, the Government of the Russian Federation did not control the work of DOSAAF, which led to the loss of most of the material and technical base, real estate, and what functioned was used, for the most part, for commercial purposes. The DOSAAF system worked independently on the principle of "survival" and anarchy in management. The enormous losses of trained personnel for the army, aviation and navy led the government to take a number of decisions on the return to DOSAAF funding and to the state order for the training of military-technical specialists for the country's armed forces.

Currently, DOSAAF is assigned state tasks for patriotic and military education of citizens, training personnel for the country's armed forces, developing technical sports, participating in the development of the physical education movement, preparing flight and technical personnel, preparing for military service of future recruits and citizens who are in reserve, to enhance the training of civilian specialists, help in the aftermath of accidents and disasters, to participate in mobilization activities.

But in order to effectively address these tasks, according to experts, it is necessary to create conditions for the functioning of such a demanded structure today as DOSAAF:
1. It is required to develop and approve a package of legislative acts regulating the activity of DOSAAF.
2. Allocate funds for repairs, the existing material and technical base.
3. Improve the management system of DOSAAF units at all levels.
4. Determine and approve the procedure for equipping DOSAAF units with new equipment, equipment and materials.
5. Develop activities to attract professional staff and young professionals to the society.
6. To restore the state order for the training of military technical specialties.
7. Approve the amount, conditions and procedure for financing the activities of DOSAAF in each direction.

Now there is practically no vocational education system: former vocational schools have been converted into colleges, which, for the most part, are oriented toward graduating from non-technical specialists. School labor education has been violated, since such a fruitful mechanism of communication between educational institutions and production as patronage has disappeared. The level of primary military education in secondary and higher educational institutions has been significantly reduced due to the lack of necessary personnel and material and technical support.

Serious failures in sports work with the population. The lack of funding led to the commercialization of sports activities. The consequences of this can lead to unrecoverable losses in the field of health, physical education, sports and education of the younger generation.

The revival of the DOSAAF structure will make it possible to level the existing omissions in many directions and to solve a significant number of problems facing the country, especially during the global financial crisis.