Steel against the atom. The last victories of the red emperor 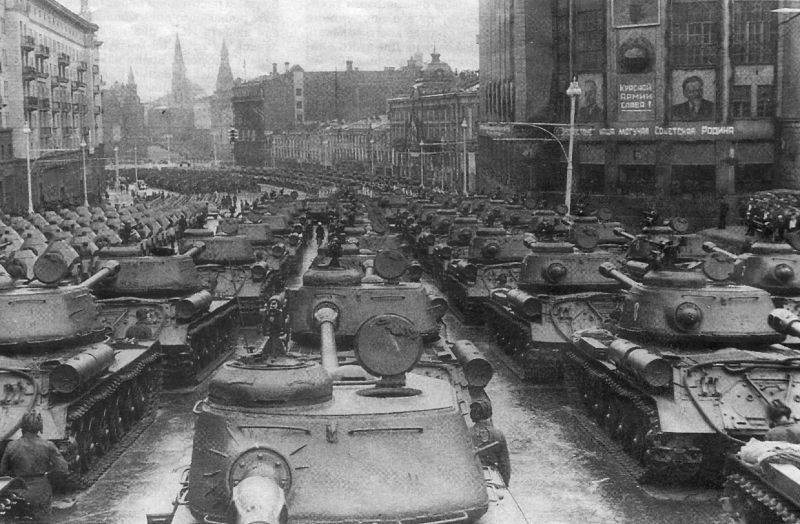 Tanks IS-2 before entering Red Square during the Victory Parade. June 24, 1945.

The threat of a new disaster

Our country lay in ruins after a bloody and fierce battle with the Third Reich. The western regions of the USSR were completely destroyed and devastated. Three out of four industrial districts were badly affected. Thousands of settlements have disappeared from the face of the earth. Many large cities in Russia such as Minsk, Stalingrad, Sevastopol and Kiev were badly destroyed. The union suffered colossal cultural and material losses. Millions of people died, others were injured, crippled, left without relatives, friends and parents. People had to huddle in dugouts, shacks and barracks until the destroyed ones were restored, new housing was built. In addition, it was necessary to crush the last hotbeds of the war - the Bandera in Western Ukraine, the "forest brothers" in the Baltic states. Fight the bandits who have multiplied during the war.

In the West, it was believed that Russia would collapse already during the war with Nazi Germany. Then they expected the USSR to recover for a very long time after the war. By all objective indicators, the United States should remain the only superpower on the planet. There was no war on their territory. The main competitors in Europe and Asia - Germany and Japan - collapsed, their territories are occupied. England and France suffered greatly during the Second World War and were forced to yield positions to the American "big brother".

America, during the war, enriched itself on military and raw materials supplies. She took Western Europe under her financial and economic control. The United States came out of the world war with a highly developed, completely whole industry, which provided a quarter of world production. A leader in a number of leading manufacturing, military technologies.

Monopoly on the atom

The United States had a monopoly on nuclear weapon... In July 1945, the Americans carried out the first test of a nuclear device. In August 1945, they carried out demonstrative and punitive atomic strikes against Japan.

The Americans had the world's most powerful strategic Aviation and showed the whole world on the example of Germany and Japan that they are ready to wipe out entire large cities and industrial areas. A fleet of long-range bombers could carry nuclear bombs. The States also had the strongest fleet in the world, aircraft carrier groups capable of reaching the enemy's shores. The Americans created a network of military bases, including naval and air forces, around the USSR.

Russia, on the other hand, has just begun to create jet aircraft. We had neither a large air-strategic force, nor a huge fleet, no aircraft carriers, no atomic weapons, no ballistic missiles.

Washington and London had clear plans for the destruction of the USSR. In essence, this was a continuation of Hitler's ideas. Dismemberment of Great Russia into national "banana republics". The elimination of communism and the Communist Party as the ideology and organizational core of the Russian people. The West wanted to finally exhaust Russia in the arms race. Intimidate the Soviet elite with the threat of a nuclear air war, before whose eyes there were examples of US and British air terror in Germany and Japan. 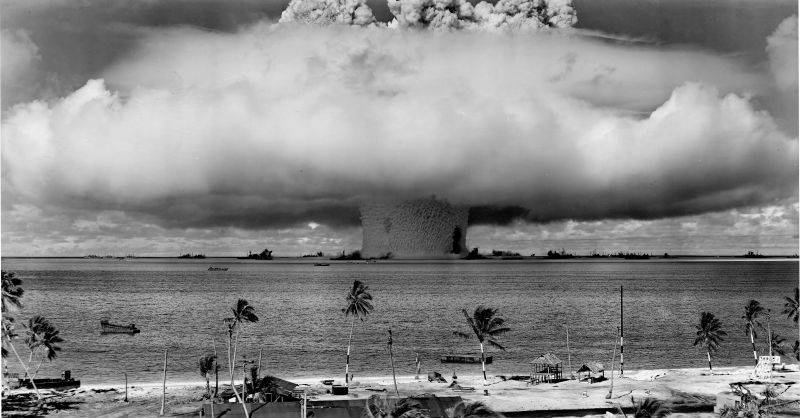 The Baker nuclear explosion in Bikini Atoll (Marshall Islands). An atomic bomb with a capacity of 40 kilotons was detonated 27 meters below the surface of the water 3,5 miles from the atoll. This was the second and last explosion in the American trials in July 1946. The goal was to study the impact of a nuclear explosion on ships.

However, there was a man with a capital letter in the Kremlin. A leader with a steel will and an iron grip. It was Stalin's common sense, determination and will that allowed Russia to avoid another catastrophe. The Supreme Commander did not sprinkle ashes on his head and shout that "we will all die", hurrying to surrender everything and everyone. He showed reason, will and determination to respond with all the might of Russia. And this turned out to be stronger than the atomic baton of the United States.

In these difficult years, Stalin's dignity as a leader and strategist was again perfectly manifested (as in the years before and during the Great Patriotic War). The Red Emperor unmistakably chose the best way to contain American aggression: the most effective and cheapest. With the help of building up the power of the ground and air forces, the development of air defense forces, the creation of ballistic missiles and their own nuclear weapons. The USSR did not become involved in an expensive race to create strategic aviation and aircraft carriers. Russia formed the best ground forces in the world during the Great Patriotic War. Therefore, England and the United States did not dare to attack the Soviets in the summer of 1945. (About how the "allies" of the USSR in the Anti-Hitler coalition wanted to commit the "Unthinkable")... In the future, the Soviet army retained its position as the best on the planet.

Thus, with a possible US attack on the USSR, we had the opportunity with powerful blows from our tank armies, covered by aviation, to knock out the weak Anglo-American forces from Europe (other countries of Western Europe could not be taken into account at all), to rush into North Africa and Asia , destroy the western military bases there and take strategic positions and points. America then simply did not have the opportunity to wage an all-out atomic war, bomb the countries of Europe and Asia. At the same time, the Union is creating a foreign sabotage network and special forces to attack key US targets in Western Europe.

Also, do not forget that Stalin was concerned about the future of the Motherland. In the Soviet state, not only are they deploying combat-ready tank and air divisions, but they are also creating the nuclear, electronic, aircraft-jet, missile and space industries in record time. Suffice it to recall that before the start of the Great Patriotic War, when every penny was counted, our country spent 8% of GDP on education.

Already in 1945, when, it would seem, all the money should be spent on rebuilding the country, 9% of GDP was spent on education, and in 1950 - 14%! Colossal funds were spent on education and science, training of new highly qualified personnel. Hence the technological breakthrough in the Union.

Stalin stopped the enemy not only with the steel of tanks and the determination to fight to the death, but also with skillful diplomacy. In 1948-1949. the Berlin crisis broke out. Stalin, who disagreed with the decision to create a Western German state, blocked Berlin, which was inside the Soviet zone of occupation.

Soviet troops closed the railways and highways in East Germany, which led to the western sectors of Berlin, controlled by the United States, Britain and France. Then the water transport was also blocked. The Western powers organized an airlift from Berlin. The blockade lasted for a year.

At the same time, the Union did not block the supply of food, fuel and necessary goods for the inhabitants of the western sectors of Berlin. On the contrary, he took care of supplying the Germans with everything they needed. That is, Moscow tried not to make ordinary Berliners victims of the political confrontation between the West and the USSR. The Western powers, on the contrary, tried to thwart these supplies. Making ordinary Berliners hostage to the situation.

The troops of the United States and their allies stood opposite the Russian divisions. Part of the US military-political leadership insisted on a decisive response to the Soviets. Including the head of the American zone of occupation, General Lucius Clay. In the end, Stalin lifted the blockade. The partition of Germany was formalized. Later, liberal democratic publicists and Westernizers portrayed the Berlin crisis as the shameful defeat of the old communist dictator. Like, it was a victory for Western democracy.

In reality, Stalin outplayed the masters of the West.

At the same time, a long and bloody civil war was ending in China. The Chinese communists smashed the pro-American regime of Chiang Kai-shek and moved towards Beijing. Washington did not want to lose huge China and was preparing for decisive actions, including atomic strikes against parts of the People's Liberation Army of China.

Stalin tried to create a red China. And a strong Eurasian bloc between the Russians and the Chinese that can withstand Western aggression. However, Moscow could not prevent the Americans from bombing China by force. Nuclear weapons have just been created. There was only one bomb. And there were no carriers of nuclear weapons at all.

Then Stalin made a brilliant move. It was known that the US stockpile of nuclear weapons was limited. The bombs are not enough for a simultaneous war in Europe and China.

The Berlin crisis distracted American attention. America was preparing for a possible armed conflict in Europe and could not deliver massive and possibly atomic strikes against the red units of the PLA in China.

And when Stalin "retreated", the Chinese communists had already gained the upper hand in the Celestial Empire. They captured the main cities and regions of the country. China became an ally of the USSR.

Now two great civilizations of Eurasia - Russian and Chinese - opposed the West at once.

This is how Stalin outplayed the West.