Just a hero. From the village of Shiryayka 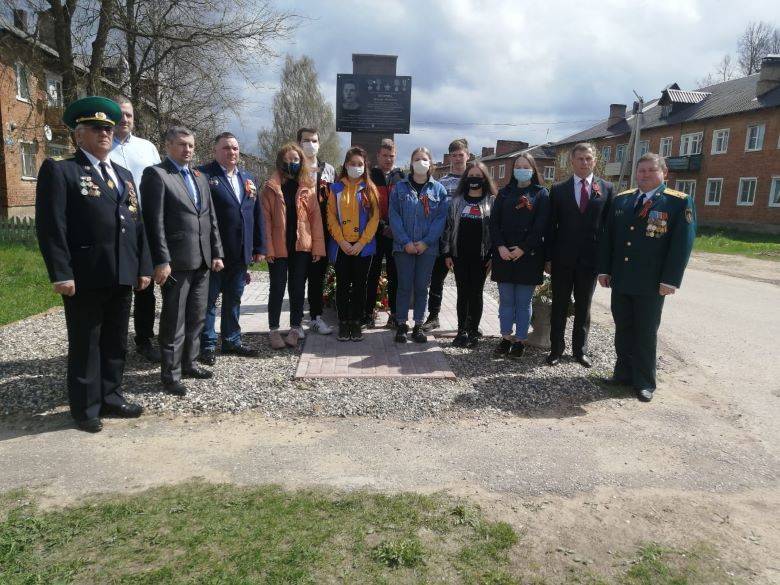 This day we brought as best we could

In the year of the 75th anniversary of the Victory, in the village of Kubrinsk, Pereslavsky District, Yaroslavl Region, a memorial stele was opened in honor of the Hero of the Soviet Union Mikhail Ivanovich Petrov, border guard, intelligence officer and partisan. The villagers, especially those who live on the hero's street, have been waiting for this day for a long time.

Oleg Koshelev, head of the Yaroslavl regional branch of the All-Russian public organization of veterans "Combat Brotherhood", put a lot of effort and effort into making this holiday take place. He and his associates were really worried until this monument finally appeared on the main highway of the village. And now everyone knows what he is, their fellow countryman Mikhail Petrov. 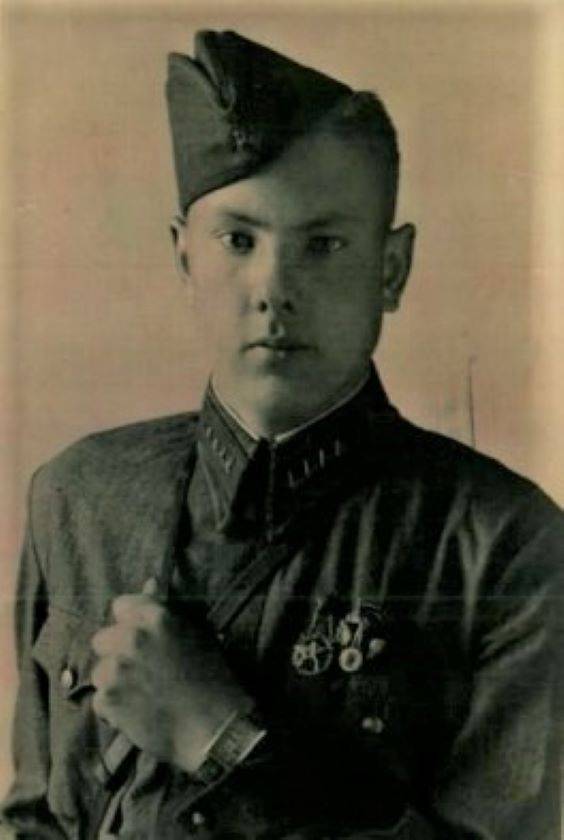 Mikhail Petrov was born on September 22, 1918 into a large peasant family in the small village of Shiryayka, five kilometers from Kubrinsk. From the archival data, you can find out that the village itself arose in the 90s of the XIX century. As the eldest in the family, Misha learned early on what hard peasant labor is.

He has to combine his studies in elementary school with work on the collective farm. The family needed help. After finishing seven classes of a rural school, he successfully completes courses in accountants and remains to work in the same collective farm "May 1".

At that time, potatoes were planted on the vast fields of the farm, barley was sown and, of course, as in all neighboring farms, flax. It turned out to be especially glorious; it was processed here to flax fiber and then sold.

In the 30s, Petrov was drafted into the ranks of the Red Army. He serves first in the People's Commissariat of Internal Affairs, and then in the border troops of the NKVD. While serving at one of the outposts on the San River, on the border of the Soviet Union, in the spring of 1941, Mikhail detained several violators.

And then the war started

And then the war began. Border guards were the first to fight. This is what the Pravda newspaper wrote about them on June 24, 1941:

“The Soviet border guards fought like lions, taking upon themselves the first sudden blow of a vile enemy. The KGB fighters covered themselves with immortal glory ... They fought hand-to-hand, and only through their dead bodies could the enemy move an inch forward. "
Sergeant Major Petrov, a clerk of one of the outposts of the 92nd Przemysl border detachment, has been participating in hostilities since the first day of the war. The detachment was commanded by Lieutenant Colonel Yakov Iosifovich Taratutin. On June 22, the enemy occupies Przemysl. The border guards were forced to retreat to the village of Nizhenkovichi.

But already at 9 am the next day they launched a counterattack and, sweeping away the invaders on their way, by 17 pm occupied the city abandoned the day before. The Nazis relaxed a little after the lightning-fast capture of Przemysl and clearly did not expect such a development of events.

The city was held by border guards until June 27. In the sector of the 92nd Przemysl detachment alone, the enemy lost about five thousand officers and soldiers. Of course, the enemy armada was difficult to resist. Petrov's outpost will hold out from the beginning of the war for another five days, and then the surviving border guards will be forced to retreat to the east in an organized manner.

Sergeant Major Mikhail Petrov received his first military award for his bravery and courage and for maintaining the integrity of the staff documents.

Further, as part of the troops of the 26th Army, he will take part in defensive battles near Moscow in the Oryol-Tula direction. After being seconded to the courses of junior lieutenants and their successful graduation in May 1942, the communist Mikhail Petrov is sent to the Separate Motorized Rifle Brigade of Special Purpose of the Western Front - the legendary OMSBON (Special Purpose Fighter).

Go to the Central Frontier Museum of the FSB of Russia on the Yauzsky Boulevard of the capital. On one of the numerous stands you will see two portraits of the heroes of the Soviet Union: the commander of the Hunter partisan unit Nikolai Arkhipovich Prokopyuk and the company commander Mikhail Ivanovich Petrov. 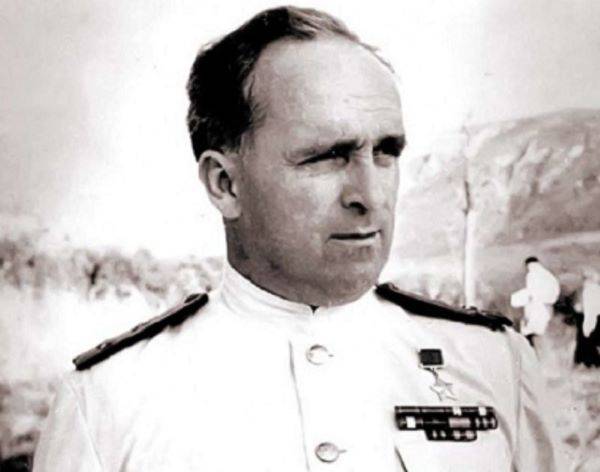 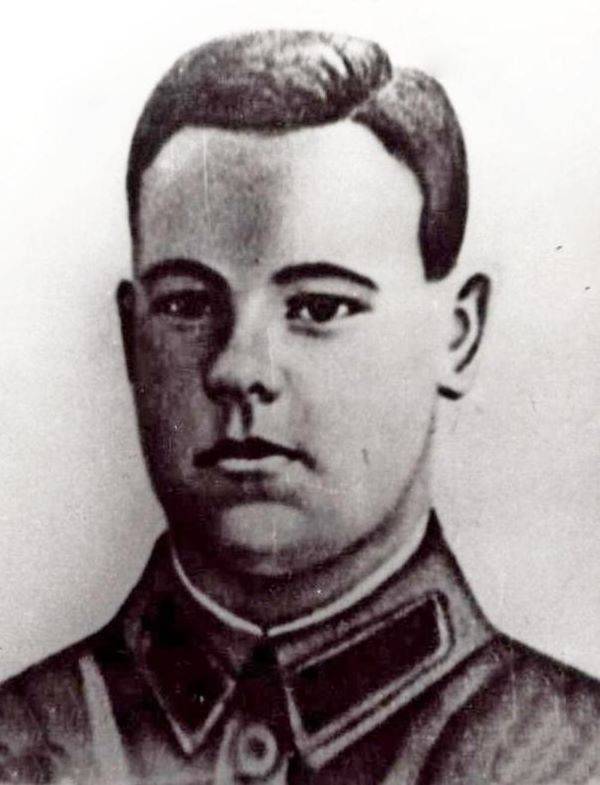 The high rank was awarded to them by one decree of November 5, 1944. And it all began with the fact that Prokopyuk, putting together a formation of 1942 fighters at the end of July 64, drew attention to Petrov's data and enrolled him in his task force.

In August 1942, they parachuted in the area of ​​the city of Olevsk, Zhitomir region, on the territory occupied at that time by the Nazis. Since that time, the Nazis have fully felt the power and hatred of the partisans who suddenly appear.

Successful raids behind enemy lines, clashes, extermination of fascist manpower, undermining enemy echelons - and all this is unexpected, inexplicable and unpredictable. Prokopyuk himself, having passed through the crucible of the Spanish war, perfectly mastered the art of rail war.

Presumably, while in Spain, he learned this from Ilya Grigorievich Starinov, a talented saboteur, a personal enemy of the Fuhrer, who taught partisans in explosives since the thirties. And Petrov, having adopted the experience of fighting on the rails from his commander Prokopyuk, independently derailed six enemy echelons.

Over time, the DRG Prokopyuk grows into a partisan detachment. Petrov is assigned to command a platoon, and when the detachment is transformed into a formation, Mikhail becomes the commander of the reconnaissance company. On New Year's Eve 1943, his soldiers destroy the Nazi garrison in the village of Gorodnitsa, Zhytomyr region.

In the spring of 1944, the partisans went into clashes with the Nazis in Poland. To understand and feel how everything was there, you need to watch the TV movie "Fern Red".

Yes, the partisans had a difficult relationship with the Polish military. But this by no means prevented them from making joint daring raids on the enemy's rear garrisons. By the summer it became very difficult. Punitive Hitlerite expeditions with the support of the Janowski forests of the Lubelskie Voivodeship are against the Soviet-Polish partisan formations aviation, tanks and self-propelled guns of the Viking division.

On June 14, the soldiers of the company of junior lieutenant Petrov, acting in a particularly critical area and making a way out of the encirclement, beat off enemy attacks one after another. The Nazis, putting their guns on direct fire, opened rapid fire at the partisan positions and set fire to the forest.

Petrovtsy rise to the attack. Having recaptured three guns and two mortars from the Nazis, they transfer deadly volleys to the Nazis. A surprise attack finally decides the outcome of the battle in favor of the partisans, but Mikhail Petrov himself was killed by machine gun fire. The partisans broke through the encirclement.

Company commander Mikhail Petrov was buried in the same place where the battle had taken place the day before. After the liberation of Poland, he was reburied at the cemetery in the city of Janow.

Twenty years after the battle in the Volyn forests, Hero of the Soviet Union Mikhail Ivanovich Petrov, whose services to the Motherland were also awarded the Orders of Lenin and the Red Star, for his courage and courage in battles against the Nazi invaders, are posthumously awarded the Polish military order "Grunwald Cross" III degree.

Every year Zinaida Nikolaevna Petrova, the daughter of Nikolai, Mikhail's brother, comes to Shiryayka, the hero's village in Pereslavl. He will walk down the street, come to his parents' house, stand, put a bouquet of flowers, think, and slowly leave.

She never saw Uncle Mikhail, except perhaps in the few surviving yellowed photographs, but all these years she knew that it was thanks to such miracle heroes as he that we survived in the hard times of testing. She undoubtedly feels pride, only she is grieving that over all these years she has not managed to go to the grave of Mikhail Petrov in the distant Polish city of Yanov. 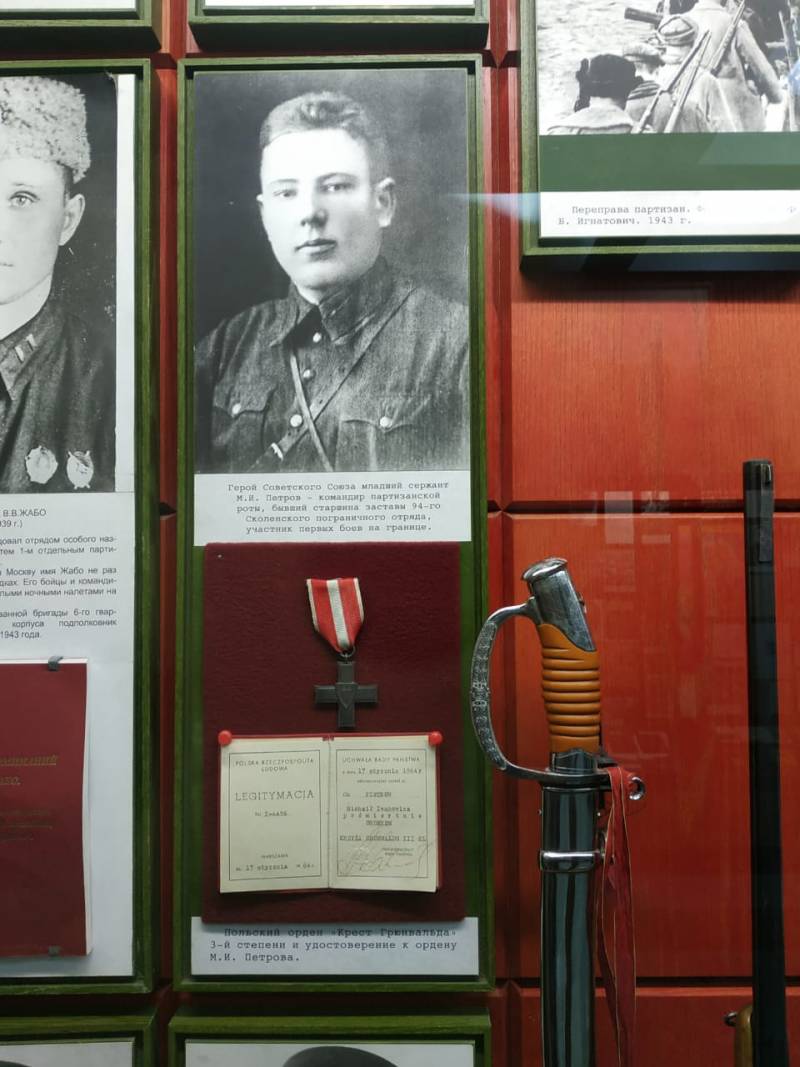 There is Razvedchik Petrov street in Pereslavl-Zalessky. Although he was first of all a border guard, and then a scout, saboteur, demolition ... And he was especially proud of this, it was not for nothing that, flying with a partisan group to the rear of the enemy, he took a border cap with him.

And in the village of Kubrinsk the highway was called simply: Petrov street. Think about it: who is this Petrov? And only after many years, thanks to the installed stele, you can learn everything about the Hero of the Soviet Union Mikhail Ivanovich Petrov.

On October 24, Russia celebrated the Day of Special Forces. Undoubtedly, on this professional holiday, the border guards also recalled the heroic biography of Mikhail Ivanovich Petrov.

Just a hero who, with his combat partisan activities during the Great Patriotic War, glorified not only his native village of Shiryayka, but also the Pereslavsky District, the Yaroslavl Region, and the whole of Russia! And we, descendants, will always remember this!

Ctrl Enter
Noticed oshЫbku Highlight text and press. Ctrl + Enter
We are
Commentary on A. Petrov's interview “Fire and Tactics in the Russian Army: Another Look”What you didn't want to know about England
10 comments
Information
Dear reader, to leave comments on the publication, you must to register.