What did the Wehrmacht pay for?

Article "Is it green" Goering's green folder, in which instructions for the occupation administration and the rear services of the Wehrmacht were considered, the question was raised: were the instructions for the purchase of agricultural products at fixed prices extended to the occupied areas? These instructions from the "Green Folder" were issued at the very beginning of the war, and later the situation could change.

A review of the documents of the command of the army corps provided some information on this issue. The purchase of agricultural products was really introduced, and was introduced, including in areas controlled by the rear services of the Wehrmacht. And in general, the army command entered into rather diverse monetary relations with the population of the occupied regions.

The order of the command of the 17th Army Corps (AK) from the 6th Army on the prices of purchased agricultural products, dated June 27, 1942, has been preserved. The order was typical and issued in the form of a circular intended, obviously, for all divisions that make up the 17th AK. The file contains an order addressed to the 113th Infantry Division; the division's name was handwritten. The division headquarters received the order on June 30, 1942, as evidenced by the affixed command stamp with the date of receipt (TsAMO RF, f. 500, op. 12474, d. 136, l. 88).

The introduction of purchases pursued the goal of streamlining army procurements. The next day, June 28, 1942, the command of the 17th AK sent another order to the same 113th Infantry Division (received on July 6, 1942), stating that there were numerous cases of "wild requisitions" (mehrere Fälle von wilden Beitreibungen ). The order stated that the Ukrainian population was losing the last cows and horses, and even calves unfit for slaughter were illegally requisitioned. The order reminded that such requisitions undermine the economy of the Reich and the occupied regions. In the interests of supplying the troops in the near future, this must be stopped, and the productive capacity of agriculture in the occupied regions must certainly be preserved. The order also emphasized that such an attitude undermines the confidence of the Ukrainian population in the German authorities. The order was personally signed by the commander of the 17th AK, General of Infantry Karl-Adolf Hollidt (TsAMO RF, f. 500, op. 12474, d. 136, l. 93).

Let's return to the consideration of prices for agricultural products. It is interesting to note that the Russian term has penetrated into the German document. Prices were divided into two categories: producer price and procurement price, and the latter was just designated Sagotabgabepreise, the first part of which, Sagot, is clearly a German tracing of the Russian term "procurement-". By this, as one might assume, we mean Soviet procurement bodies like Zagotzern, which came under the control of the Yug economic inspectorate, about which there is a direct indication in the document. 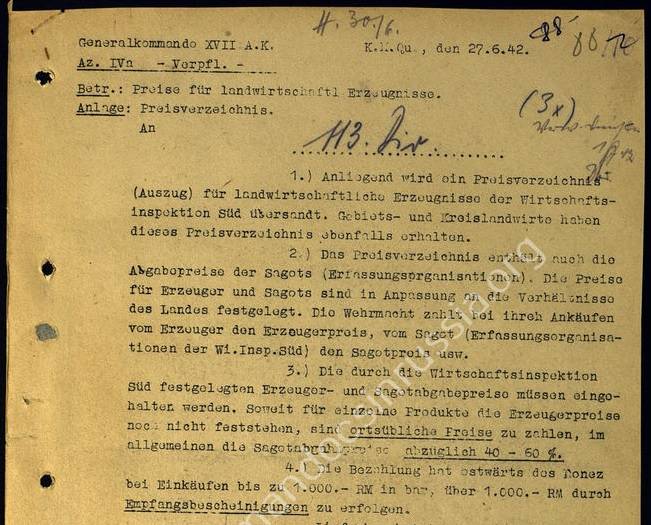 The beginning of the order of the command of the 17th AK with an explanation of the procurement bodies and the procedure for purchasing food. TsAMO RF, f. 500, op. 12474, d.136, l. 88
The army rear services had to pay for agricultural products at producer prices when purchasing directly from peasants or on collective farms, and at procurement prices when purchasing from procurement organizations. The order extended this procedure to the procurement of food and fodder for the front-line strip east of the Donets River (the area east of the Seversky Donets, up to the Oskol River, was captured by the 6th German army during the offensive on the northern face of the Barvenkovsky ledge in the second half of May - the first half of June 1942. ), and the issuance of delivery receipts was prohibited. The divisions undertook to promptly bring prices to the divisional procurement bodies, economic units and authorized officers and non-commissioned officers. 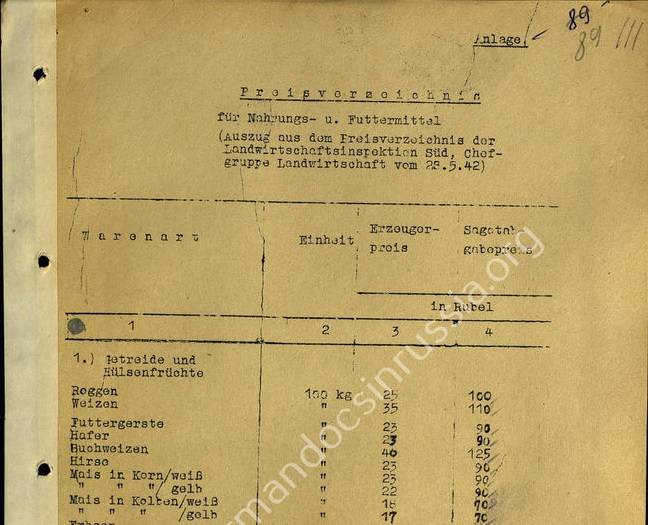 Appendix to the order for the purchase of food: list of prices
The prices set by the Yug economic inspectorate were for all types of food and fodder. From a rather long list, we will select a few of the most important positions in order to compare the proposed prices with prices in Germany in May 1942. For comparison, a conversion will be made to comparable units. Inspection "South" prices were given for 100 kg and in rubles. German prices are in Reichsmarks and per tonne. At the rate set for the occupied territories, the Reichsmark was equal to 10 rubles.

So, a comparison of prices for agricultural products in the Reichsmarks: 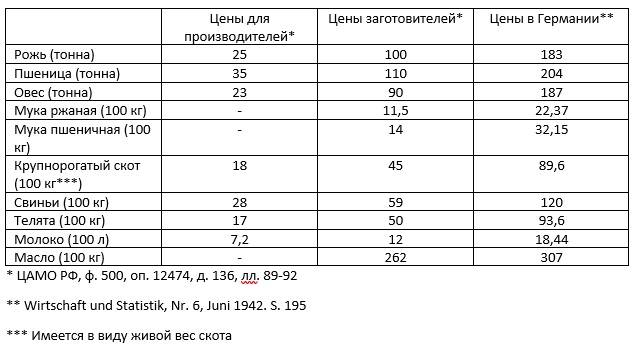 The position from the table is quite obvious. Prices for agricultural products in the occupied territories were significantly lower than in Germany, on average by half; although it should be noted that the prices indicated for Germany are the prices of large wholesale trade, and not procurement prices for the peasants.

It is not clear from the documents exactly how and with what the troops were paid for agricultural products. The documents do not mention the calculation in rubles at all, only in the Reichsmarks. Karbovanets was introduced to the Reichskommissariat Ukraine in July 1942, that is, after the establishment of the procurement procedure in question. By order of the OKH of September 19, 1942, the army bodies were to accept karbovanets on a par with rubles and imperial credit cards (TsAMO RF, f. 500, op. 12474, d. 136, l. 136).

The principle of calculation was the same as in the Green Folder: up to 1000 Reichsmarks - in cash, over 1000 Reichsmarks - with receipts, which were subsequently cashed out. A thousand Reichsmarks was a large sum; to get that much, the peasants had to hand over, for example, 40 tons of rye - the harvest of an entire collective farm.

The question of the circulation of cash currency, the exchange of Reichsmarks for rubles and karbovanets, as well as the use of captured Soviet rubles in payments should be clarified in detail. At least then, in order to understand what part of the purchases was part of Germany's military expenditures (paid in Reichsmarks or with the exchange of rubles for them), and what part was actually free, since it was paid with trophy rubles that circulated only in the occupied regions.

Surrender of weapons and purchase of carts

In general, the monetary relations between the population of the occupied regions and the German army bodies were, judging by the documents, broader than one might imagine. In addition to purchasing food, there were, for example, payments for collecting weapons and ammunition at the battlefield.

On May 8, 6, the command of the 4th AK from the 1942th Army ordered the local population to be paid a fee for weapons, ammunition and various military property found and returned. The population had to report what was found to the nearest German unit or the Ortskommandatory, which had to pay a reward. As an example of such payments, the command cited the rates introduced in the 6th AK from the 9th Army, which operated in the Rzhev area (in the Reichsmarks):

The warehouse was entitled to a prize of 100 Reichsmarks (TsAMO RF, f. 500, op. 12474, d. 136, l. 54). The document did not contain any reservations about captured weapons; apparently, they paid the same for both German and Soviet. Apparently, payment for finds of weapons, ammunition and military property was an initiative of the OKH, since the document refers to the order of the Quartermaster General of the OKH dated April 5, 1942. In view of the tense situation with non-ferrous metals, the payment of two Reichsmarks for 50 kg of brass sleeves looks more than reasonable. It is still difficult to say about the scale of such operations; it is possible that the necessary instructions will be found in the financial statements of units and formations.

The Wehrmacht needed a fairly large volume of transportations carried out by animal-drawn transport, the importance of which increased sharply during the thaw and winter. The same 8th AK, on ​​May 10, 1942, informed the subordinate divisions that in the occupied regions of the USSR, including the Reichskommissariat Ostland and Ukraine (with the exception of Transnistria), prices were set for the purchase and rental of horses and carts for the Wehrmacht (TsAMO RF, f. 500 , op.12474, d.136, l.67).

Purchase of horses and carts:

Rent of a horse with harness and carriages per day:

Moreover, for the sale of a horse, the Wehrmacht required the permission of the agricultural Fuhrer, responsible for the region or for the collective farm to which the seller belonged.

If such a procedure for the acquisition and lease of horses and carts was established for the entire occupied territory of the USSR, then, probably, there should have been reports on the number of acquired or rented horses, or at least the amount spent for these needs. 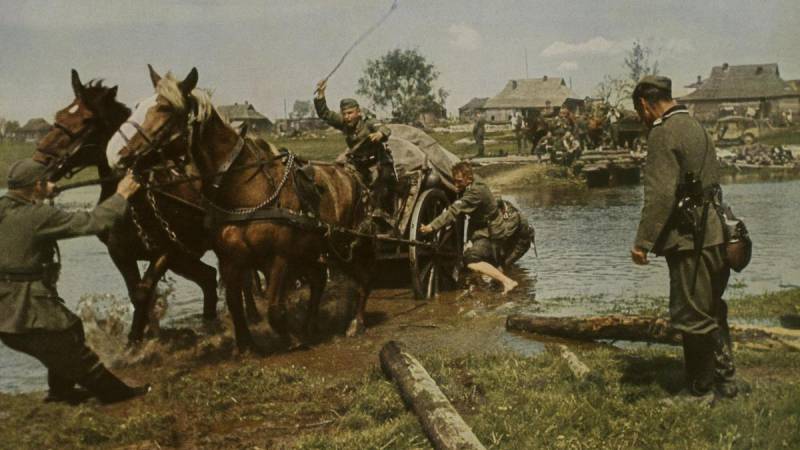 The German troops needed a lot of horse-drawn transport. To transport 170 tons of food required per day by the German infantry division, about 5 thousand horses were required
With these orders, the Germans clearly tried to streamline the use of agricultural resources of the occupied territory (we are talking about the east of the Ukrainian SSR, the region southeast of Kharkov), counting on the long-term supply of their troops, and also tried to attract the sympathy of the population, at least in part, and even involve it in cooperation with German troops and army bodies.

In the case, most of the documents refer to the 8th Army Corps from the 6th Army, which was destroyed surrounded by Stalingrad. So the documents in question are most likely the trophies of the Battle of Stalingrad.

Ctrl Enter
Noticed oshЫbku Highlight text and press. Ctrl + Enter
We are
Is Goering's Green Folder green?Myths of the Great Patriotic. Papier mache helmet
73 comments
Information
Dear reader, to leave comments on the publication, you must to register.