Who can now be frightened by the ghost of Great Serbia 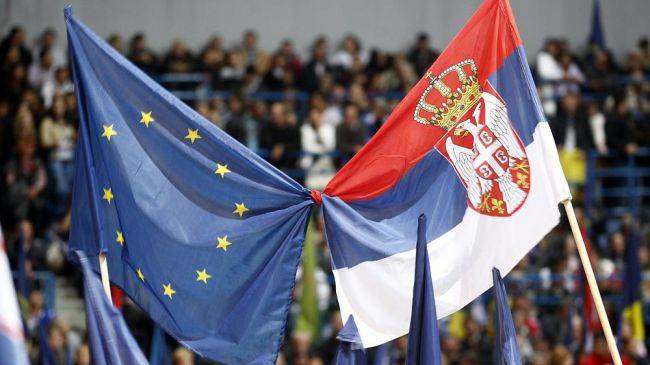 "Brothers" are not there?

Recently, Serbia, under pressure from NATO and the EU, abandoned joint military maneuvers with Russia and Belarus. A little earlier, Belgrade joined the EU sanctions measures against Belarus, together with the EU did not recognize the results of the presidential elections in Belarus.

Alas, but once again (during the period of the greatest tension in relations between Russia and the West) the Serbian side is demonstrating its orientation in the direction directly opposite to the notorious "historical kinship". Although, of course, the current situation around Serbia could not but compel Belgrade to take such actions.

And yet, what is this if not a stab in the back of Russia, and at the same time with it - and Belarus? And this, with all the references to the traditions of friendship, is far from the first blow. Johannes Hahn, European Commissioner for European Neighborhood Policy and Enlargement Negotiations, in a recent interview with the Belgrade newspaper Vechernie news"Ordered Serbia not only to show solidarity with the EU's position on Belarus. But also support the EU's policy towards Russia. 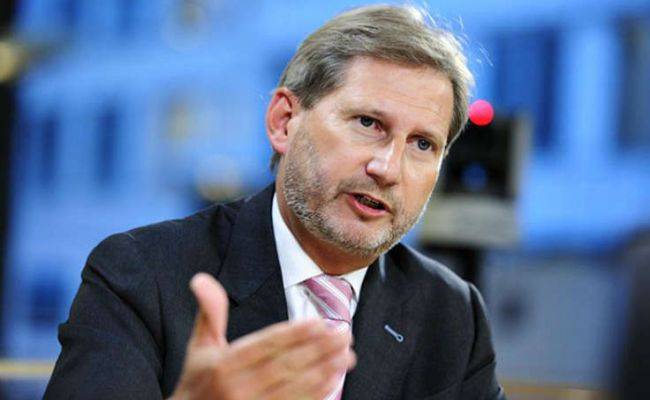 We expect your government representatives to continue to demonstrate their commitment to the key strategic goal of joining the EU in their statements and actions.
According to J. Hahn, the EU understands that Serbia and Russia have long-standing ties, but Belgrade has already made its choice in favor of joining the European Union as a strategic priority.

What does this mean in practice? Belgrade must now follow the general line of Brussels on these issues. As a reminder, back in 2012, Serbia was announced by the EU leadership as a candidate for joining this interstate association, which has already become a kind of political bloc more abruptly than NATO. It is planned to join the Serbs to the European Union no later than 2021.

Moreover, we note that Serbia has been participating in a free trade zone with the Russian Federation and other countries of the Eurasian Economic Union for more than five years. How will both be combined? There is no "official" clarity and is not yet expected.

Meanwhile, Serbia, as stated by Serbian Prime Minister Anna Brnabic, has officially joined the recent statement of the European Union, which announced the presidential elections in Belarus as not meeting international standards and recommending sanctions against Lukashenka’s Belarus. 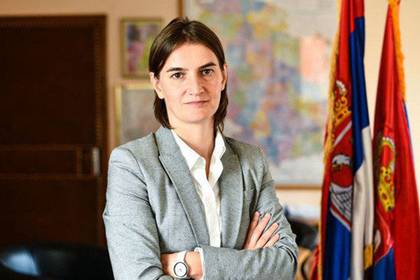 Ana Brnabic, like many Serbs, tries to sit on two chairs
At the same time, Mrs. Brnabich made a softening curtsy addressed to Lukashenka personally. She expressed hope that the head of Belarus

will not be offended by Belgrade joining the EU statement. We must not forget that the Belarusian leader was the only world leader to visit Serbia during the 1999 NATO bombing.

As you can see, the Serbian leaders have quite a good memory. But the memory of the Russians is still all right. Yes, the current tendencies exert maximum pressure on Serbia, which remained after the collapse of the Tito SFRY. But история, as you know, has a tendency to repeat itself: after all, in the recent past, the united Yugoslavia more than once inserted pro-Western sticks into the wheels of Soviet policy.

For example, the rapidly developing military-political cooperation of the SFRY with NATO in 1948 led to the Yugoslav-American open-ended agreement on "mutual security." And in 1951 - to the creation under the auspices of NATO of the "Balkan Pact" within Yugoslavia and NATO members Greece and Turkey. Moreover, those treaty and the Pact existed until the collapse of the SFRY, that is, even after the end of the Soviet-Yugoslav confrontation in the mid-1953s.

In 1967, and then in 1973, Belgrade rejected Moscow's requests for the use of the base points of the Yugoslavian fleet for military assistance to Syria and Egypt. But in 1979, the SFRY, as expected, joined the anti-Soviet campaign in connection with the introduction of Soviet troops into Afghanistan.

At the same time, the Pol Pot regime was officially recognized in Belgrade until ... until the collapse of Yugoslavia itself. And this same country was one of the few who did not oppose the PRC's aggression in Vietnam. By the way, the SFRY in 1969 did not condemn the military provocations of the PRC on the Soviet-Chinese border.

But Marshal Tito harshly condemned the entry of Soviet troops and troops of the Warsaw Pact countries into Hungary in 1956 and Czechoslovakia in 1968. It is hardly worth forgetting that even the “Non-Aligned Movement” itself, the creation of which was personally initiated by the Yugoslav leader back in 1961, was intended to "fence" developing countries not so much from the United States as from the USSR (On the ruins of Yugoslavia. Alien Tito's heirs).

At the same time, according to Lazar Moisov, the ambassador of Socialist Yugoslavia to the USSR at the turn of the 50s and 60s,

Belgrade expected that Russia would limit at least political ties with the West in connection with the NATO bombings and the rejection of Kosovo. But this did not happen, because there was no longer either the USSR or the Warsaw Pact, and Belgrade did not consider these factors to be the main factors in Russian policy in the Balkans.

If no help comes

With reference to crises and sanctions, the

large-scale financial support from Russia to Serbia, which was also hoped for in Belgrade. Is it because there the course of reconciliation with the West was taken, because in the current political conditions in the region it could not but lead to the development of Serbia's rapprochement with the West ...

This was noted by the Yugoslav diplomat in his memoirs.

According to L. Moysov, Belgrade feared that

otherwise, autonomous Vojvodina can be torn away from Serbia in favor of Hungary (it was occupied by Hungary in 1940-45 - Ed.), and then little will remain of Serbia. 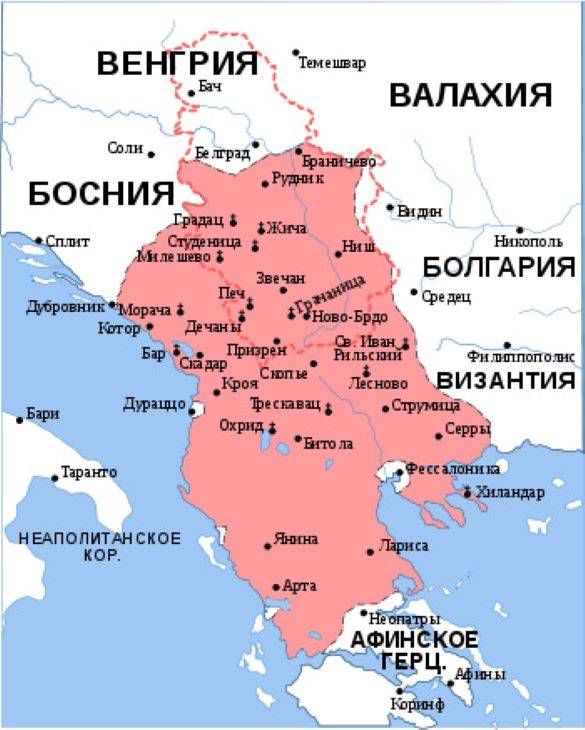 Borders of modern Serbia and Great Serbia under King Stephen Dusan
It is quite possible to agree with the reasons for the growing pro-Western tilt in Serbian foreign policy, which were cited by L. Moisov. As a result, according to the well-known Serbian political scientist Srdjan Persic, Serbia began to move closer not only to the EU, but also to NATO. Moreover, the country until 2012, under the pretext of military reform in the security sector, followed completely in the wake of NATO.

The years 2000-2012 can generally be called the era of "quiet" integration of Serbia into NATO. However, in 2014, military cooperation with Russia resumed: the parties held joint military exercises, purchases of Russian weapons began to grow. At the same time, the Russian-Serbian military exercises with the participation of the Belarusian side have become an annual practice. At the same time, Serbia, however, did not refuse from cooperation with NATO.

But again, geopolitical and regional realities, combined with the tightening of anti-Russian sanctions by the United States and other NATO countries, and with the "addition" of their obstruction of the results of the presidential elections in Belarus, led to the strengthening of Belgrade's pro-Western course.

Srdjan Persic and other Serbian experts note in this regard that the change of course was clearly demonstrated by the signing of an agreement on the "normalization of economic relations" between Serbia and Kosovo in the presence of Donald Trump on September 4 in Washington. This has drawn Serbia into the American sphere of influence. "

On the one hand, the situation is understandable. By now, Serbia, already deprived of the Kosovo region with NATO's help, is surrounded by NATO member countries that are openly hostile to Belgrade. In the latter case, it is primarily Albania, Croatia, the Muslim republic of BiH, not to mention Kosovo.

Let us recall that the possibility of creating a certain political bloc within Serbia, Montenegro and North Macedonia was lost by the mid-2010s. And not least “thanks to” the lack of Russian support for the formation of such a coalition (see. Inheritance and heirs of the master of Yugoslavia).

But, on the other hand, Serbia is actively participating in the Russian gas export project "Turkish Stream", which has obvious geopolitical significance for Russia. In addition, Serbia participates, we repeat, in a free trade zone with the EAEU, and remains among the major importers of the Russian military-industrial complex. The Serbian authorities, as you know, have more than once at the official level expressed solidarity with Russia on foreign policy issues.

In a word, if during periods that were quite favorable for Yugoslavia, Belgrade opposed Moscow, then is it worth it to be surprised at the current Belgrade "bends"? ..

Ctrl Enter
Noticed oshЫbku Highlight text and press. Ctrl + Enter
We are
Results of the week. “I am a prince! What I want - and I turn back ... uh ... I act in the interests of the state "Results of the week. "God forbid to see Russian revolt, senseless and merciless!"
70 comments
Information
Dear reader, to leave comments on the publication, you must to register.