When Tito left. Inheritance and heirs of the owner of Yugoslavia 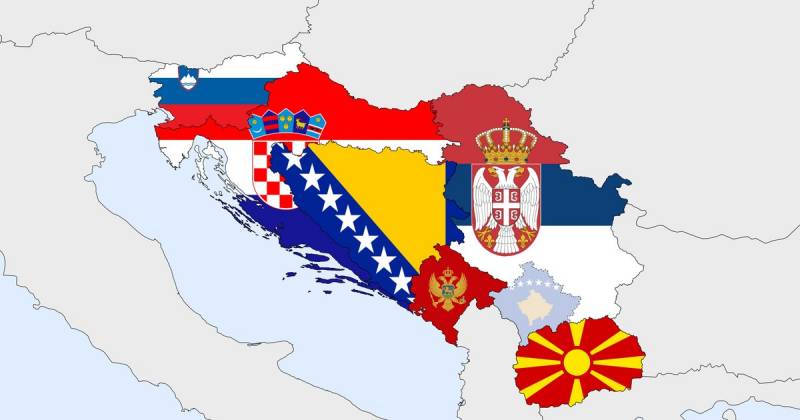 Rivers of blood and ... drops of honor

Today it is believed that the collapse of Yugoslavia, which took place 10 years after death Marshal Titowas directly due to the impossibility of the coexistence of all federal republics in a single country. Allegedly, all of them together pronounced a collective “sentence” of united Yugoslavia. But the experience of the deliberate split of a strong power, tested in the SFRY, then it was by no means accidentally used for the collapse of the Soviet Union.

It is also believed that the "divorce" among the Yugoslavs was universally bloody. But such dubious postulates are, to put it mildly, a hyperbole. Today, few will remember how quietly Slovenia left the federation, how Macedonia managed to manage without violent clashes. The Montenegrins actually actually stayed in their mountains, although they were terribly crushed from Belgrade, and beautiful Dubrovnik was ablaze very close by. 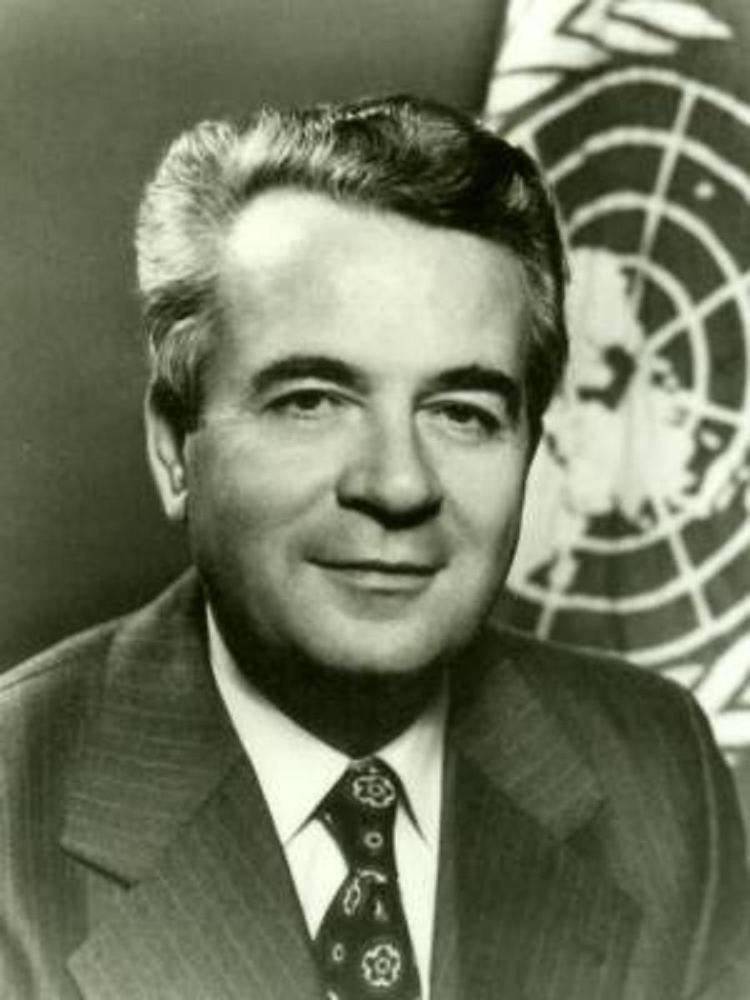 Lazar Moisov. They even listened to him at the UN
First, we give the point of view of the Macedonian Lazar Moisov (1920-2011). He was far from the last politician of the last years of Yugoslavia - the Minister of Foreign Affairs and a member of the Presidium of the SFRY from Macedonia, and even de jure President of Yugoslavia - the head of the Presidium of the SFRY in 1987-1988.

They prepared and accelerated the collapse of the SFRY, hiding behind ostentatious "titoism", leading from the mid-70s policies of the republics, which were alien to the ideology of the community of Slavic peoples of Yugoslavia. For well-known reasons, the ideology of Yugoslav unity was supported by the Croat, but the creator of post-war Yugoslavia, Marshal Tito. Such an ideology was adhered to in the Orthodox Serbia, Macedonia and Montenegro, but not in other religions of Croatia, Bosnia, and Kosovo.
The politician quite reasonably believed that the situation exacerbated

and the blurring of the centralized functions of the SFRY initiated by Tito as opposed to maximum centralization in the USSR ... These destabilizing factors, due to their phased stimulation by the West and the weakening of the governing prerogatives of Tito and Protitovites in the last 5-6 years of his life, led the country to collapse. What influenced the fleeting collapse of the USSR.
Moisov noted that the Yugoslav collapse turned out to be really bloody

precisely where the pro-Orthodox ideology of Yugoslav unity was actively rejected: in Croatia, Bosnia and Kosovo. Accelerated the collapse of the country and the vast territory of centrifugal and West-supported Croatia, which included almost all ports and other communications of a single country.
The position of Serbia, Macedonia and Montenegro, as well as the close position of Slovenia in favor of Yugoslav unity, could no longer change the situation. Moreover, years later, the most severe consequences of the collapse of Yugoslavia became characteristic of the Orthodox Serbia, the Serbian regions of Bosnia-Herzegovina and Croatia. Meanwhile, the notorious Hague Tribunal for the former Yugoslavia immediately took the position of a very dubious anti-Orthodox, anti-Serb and generally anti-Yugoslav legal priority.

The Hague Tribunal has become a kind of propaganda brand in the West, and, as noted by the famous Russian Balkanist Alexei Dedkov,

Among the accused in The Hague were almost the entire military and civilian leadership of the Serbs, including ex-presidents, members of the government, chiefs of the general staff, senior military leaders, heads of law enforcement agencies and special services. But from other nations, the accused were most often the soldiers, rarely officers, and even more so representatives of senior management.

Who has a Macedonian accent

Macedonia was chosen as the stone from which the Yugoslav masonry was supposed to begin to pour. At the same time, nobody was interested in the fact that Greece opposed the isolation of Northern Macedonia from the FPRY-SFRY. There, not without reason, they have long feared almost traditional claims to this part of Macedonia by adherents of the idea of ​​"Great Bulgaria". Northern Macedonia was always preferable to Athens as part of Yugoslavia than under the control of Sofia.

Already in the early 90s, the Greek Foreign Ministry offered its mediation in resolving the problems of Yugoslavia. There was an idea to also attract functionaries of the Balkan Pact, a political and economic association within Yugoslavia, Greece and Turkey, to resolve the crisis.

However, the "last" Yugoslav authorities were confident in their capacity to preserve the federation. In Turkey, they did not react to the idea of ​​Athens at all. And the structures of the Balkan Pact, including the main ones - the Council of Prime Ministers and the Council of Foreign Ministers - were by then only a decoration. They have not gathered together since the death of Tito.

Despite the fact that Greece was a member of NATO and the EU, “any of its authorities, especially the military, were prone to nationalist politics,” noted the long-standing general secretary of the Greek Communist Party, Kostas Koliyannis. The neighboring countries of Greece not only contributed to the non-aligned Yugoslavia, which remained outside of NATO, the EU and the Warsaw Pact, but also to Stalin's Albania.

"King of the Hellenes" - this was the official title of the kings of Greece, which was a monarchy with a short break until 1974. It is characteristic that, in connection with nationalist claims, the "black colonels" even probed the ground in Belgrade about the connection of Greece to the Non-Aligned Movement.

In the framework of such a policy, Greece did not object to the proclamation of Macedonia as a union republic in 1945 as part of Yugoslavia. Until the collapse of Yugoslavia, the position of Athens did not change. But when the ex-Yugoslav republics rushed to the EU, and then to NATO, the Greek authorities began to demand a change in the name of Macedonia, which its leaders objected to.

In Greece, as Kiro Gligorov noted,

for obvious reasons, they did not want not only the collapse of Yugoslavia, but also that the northern Greek border would become controlled by Brussels. For this reason, a mutual political game has been going on around Greece’s “intransigence” about the name of Macedonia and the objections of Athens to its participation in the EU and NATO with the same name. 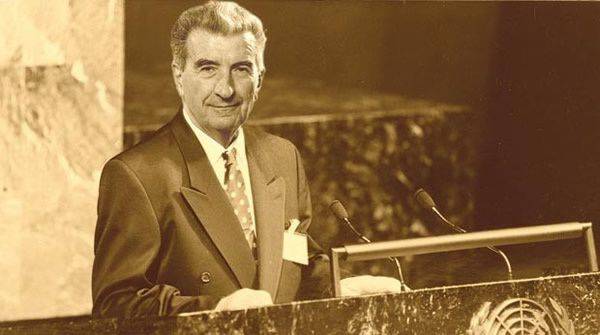 Kiro Gligorov. President of Macedonia forced to resign
But, in his opinion, in fact, the West is annoyed by the mention of even the former but united Yugoslavia in the official name of Macedonia: “The former Yugoslav Republic of Macedonia”. Western politicians

advised us to remove the reminder of ex-Yugoslavia, but to no avail. For a long time, our position was in the hands of Greece.

The West did not initially trust independent Macedonia. First of all, because its first president, Kiro Gligorov, actively advocated the confederate reorganization of the former SFRY, against the NATO bombing of Serbia and the separation of Kosovo from it. Moreover, he stated that

regardless of whether Yugoslavia exists, we are all Yugoslavians. Therefore, we must understand each other and strive for consolidation.
Already in the mid-90s, a series of assassination attempts against Gligorov and unprecedented propaganda persecution began. This deprived him of his presidency at the end of November 1999. But even being retired, Kiro Gligorov did not change his position, regularly declaring them in local and foreign media.

Close political and economic interaction with Russia could alienate Macedonia from NATO and the EU, for which both Kiro Gligorov and the Macedonian Prime Minister Nikola Gruevsky advocated. The latter during his visit to the Russian Federation (2012) proposed the creation of a political and economic “chain” Montenegro - Serbia - Macedonia - Russia with the creation of a free trade zone of Macedonia with the Eurasian Union (with the Serbia the EAEU has existed since the beginning of the 2000s). 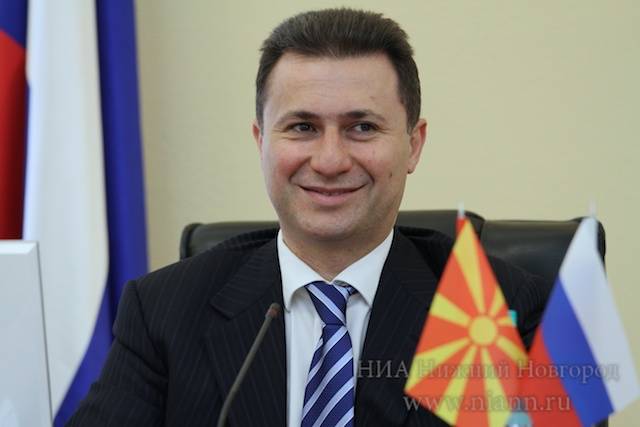 Nikola Gruevsky, pro-Russian prime minister of Macedonia
The energetic prime minister also proposed to implement, with Russian assistance, a unique strategic project as far back as the mid-70s - the construction of the Danube - Aegean Sea shipping channel. On the route Belgrade - Skopje on the Vardar River - the port of Thessaloniki in northern Greece, ships of the "river - sea" class could go.

This ambitious project that can significantly change the economic map of the Balkans is still supported by Serbia. Gruevsky presented the project at the Chamber of Commerce and Industry of Russia in the summer of 2012, but Russian business and political circles ignored it.

Gruevsky followed in the footsteps of Slovenian President Milan Kuchan and the same Kiro Gligorov, advocating economic cooperation between the countries of ex-Yugoslavia and also putting forward the idea of ​​a renewed Yugoslav confederation. It is interesting that here Moscow demonstratively remained "neutral." So it turns out that Russia has lost an important potential ally in the Balkans.

One cannot but recall that the very idea of ​​a canal to Thessaloniki is by no means new: it was worn in Vienna even before the First World War, which became one of the incentives for the expansion of Austria-Hungary in the Balkans. Before the next world war, the project was seriously interested in the Italian Duce and the German Fuhrer.

However, Marshal Tito was the first to take him seriously. It was enough for him to persuade only the Greeks, However, the owner of Yugoslavia first announced the project at negotiations in Belgrade with German Vice Chancellor E. Mende. Focusing on German industrial potential, the idea was soon supported by the Greek military junta and the international Danube Commission (see "How the Danube flows into the North Sea, and the Rhine - into the Black").

By the way, the project was beneficial to the USSR, because it allowed to reduce dependence on the Black Sea Straits controlled by Turkey. At the same time, on the one hand, Western assistance in the implementation of such a project would strengthen the political and economic relations of the SFRY with the West, which are already almost allied. But on the other hand, Yugoslavia would advance to the first roles in Southeast Europe and especially in the Balkans. Moreover, in a "bundle" with the nationalist Greek junta. 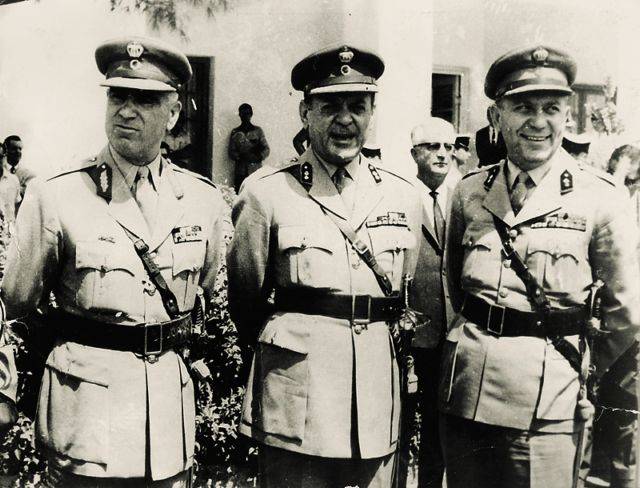 Black colonels, forgotten "masters" of Greece
This, of course, could weaken the political partnership with Yugoslavia long debugged by the West, in which it was not Belgrade that always played the part of the first violin. Therefore, the West preferred red tape rather than help in building such a canal, realizing that Belgrade, together with Athens, could not master such a technologically complex and high-cost project (over $ 7 billion in mid-70s prices).

Western promises to promote the creation of such a highway were repeated annually, but no more. Meanwhile, I. B. Tito preferred to listen to these promises rather than address Moscow requests for the creation of a Trans-Balkan canal. Marshall had no doubt that Soviet assistance in this project would only strengthen Soviet pressure on the SFRY on foreign policy issues. And de facto will involve the country in the Warsaw Pact. 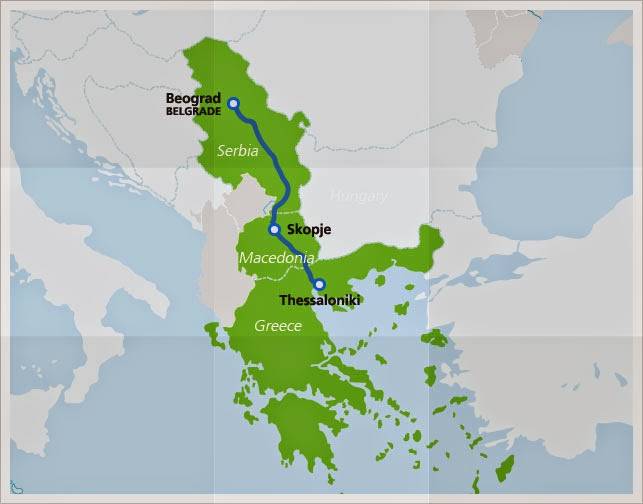 Channel "dreams" so far remains a dream
Is it any wonder that as a result, a promising project is still a project. Only the transit annual revenues of Yugoslavia and Greece along this waterway could amount to 60-80 million dollars in the first three years of operation of the canal, and for 4–5 million dollars already in the 85th and 110th years. This is an estimate multilateral design team.

Such profits would surely enable Belgrade and Athens not only to pay off investors, but also to prevent the financial bankruptcy of Yugoslavia before the West by the end of the 80s. It is hardly worth doubting that it only accelerated the collapse of the SFRY.

Author:
Alexey Chichkin, Artyom Alekseev
Photos used:
www.niann.ru, from the personal archives of the authors
Articles from this series:
After Tito there was a flood. The heavy legacy of the “master” of Yugoslavia