The likelihood of a military conflict between Poland and Belarus: comparing the chances of the parties 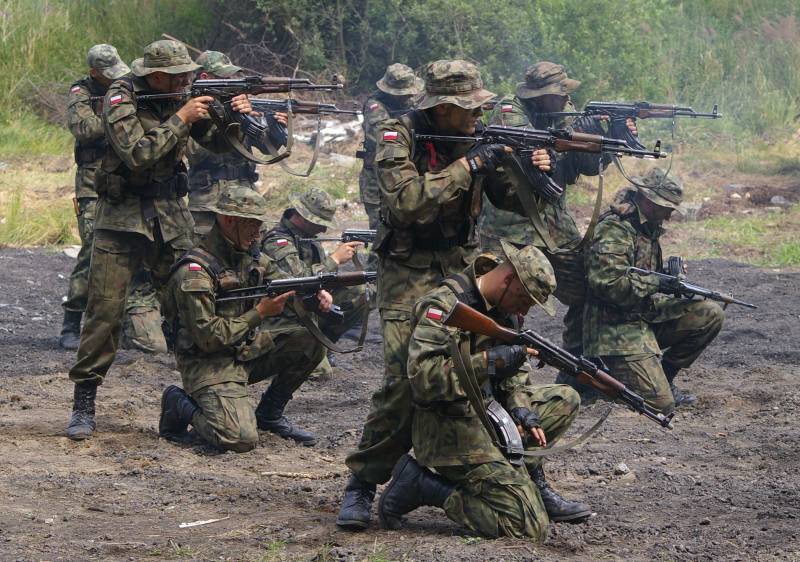 During the meeting of the presidents of Belarus and Russia in Sochi, Alexander Lukashenko thanked Vladimir Putin for making it clear that no one “can rattle weapons"At the Belarusian borders, since" these are the borders of the Union State. " That is so, but let's imagine for a second the situation of a military clash between Minsk and Warsaw, in which Russian military aid and NATO's participation will be taken out of the brackets. Whose chances of winning in this case will be higher?


Let's start with the simplest one - comparing the size of the armed forces of the two countries. Here Poland seems to be ahead and is increasing the gap at a faster pace. If in 2015 its army consisted of 95 thousand personnel, then by the beginning of this year this figure had increased to almost 130 thousand. Moreover, Warsaw does not hide plans to increase the number of Poles standing under arms to 200. In addition to the regular army, the country pays considerable attention to the creation of territorial defense forces, or, to put it simply, the militia. It is created largely on the basis of the experience of Ukrainian volunteer battalions and is being trained by American instructors. Now the number of such formations reaches 20 thousand people, by 2024 it is planned to increase it to more than 50 thousand.

Only 65 thousand people serve in the Belarusian army, of which 45 thousand wear shoulder straps. The armed forces are half the size. Therefore - no options? Let's not rush to conclusions: the Polish army is professional, that is, calling things by their proper names, mercenary. In Belarus, general military service remains. Consequently, in the event of the outbreak of war, Minsk will be able to call on from 350 to 500 thousand (according to various estimates) quite combat-ready reservists who have gone through an army school.

Believe me, you can find how to arm and equip them: Belarusian military warehouses for long-term storage, unlike Ukrainian ones, have not been plundered or sold out. By the way, the Belarusians also have territorial defense forces that are quite capable of continuing and creatively developing the glorious partisan traditions, and they number six times more in their ranks than the Polish: 120 thousand people (again, a large number of former "conscripts" is affected). So the quantitative comparison (if we take the wartime conditions) is still in favor of Minsk.

In terms of the size of military budgets, Poland is definitely in the lead. According to available data, this year they have to spend more than $ 13 billion on defense needs, which is 2,1% of the country's GDP. Belarus spends a little more than $ 620 million on the same items. But here, too, it is hardly worth rushing to categorical conclusions. With the 92nd military budget in the world (according to the Global Firepower rating) in terms of power and combat readiness, the country occupied 53rd place at the beginning of this year, ahead of some European armies, funded much more generously.

It's time to take a look at the armaments of both armies. By tanks Minsk is definitely ahead. According to the most conservative estimates, his army has more than 1300 of them in service, according to broader ones, taking into account the mothballed vehicles, - 1600. These are mainly various modifications of the T-72, including two dozen T-72B3, there are also about 70 T-80 ... The Polish army has a good tank fleet by NATO standards: it has 900-1000 vehicles. Basically, these are either T-72s of Soviet construction or PT-91 "Twardy" made in Poland itself. There are also two and a half hundred German "Leopards" of varying degrees of wear and tear, mainly in the 2A4 modification. In terms of the number of armored personnel carriers and infantry fighting vehicles, the Belarusians also outnumber the Poles by one and a half times (about 3 thousand units against 2 thousand).

In artillery, Belarus definitely wins. In terms of towed artillery, the local army is, according to the rating of the same Global Firepower, in 17th place in the world, and in terms of reactive artillery - in 15th. It is impossible not to mention the Belarusian-Chinese-made MLRS "Polonaise", which began to enter the troops a few years ago, with fairly good performance characteristics. However, the basis of the fleet of these weapons is still represented by Grads, Hurricanes and Smerchi, of which there are more than one hundred.

Aviation… Here, both sides have nothing to boast about yet. Warsaw's planned purchases of 32 F-35 Lightning IIs are a matter of the future. That is to say, a multipurpose crane in the sky ... Today, the Air Force there has fifty F-16s. The rest is the Soviet MiG-29 and Su-22M, either already completely decommissioned, or not yet. Belarus has rapidly pulled ahead in terms of fleet renewal, having received the first four 4+ Su-30SM generation aircraft this year. The delivery of the remaining eight such aircraft, presumably, will not be delayed (under current conditions). However, the same MiG-29s, which are in service with the Belarusian army, underwent a deep modernization, which significantly increased their combat capabilities.

However, the picture of approximate parity in the air for the Polish side is spoiled by the Belarusian air defense. There is even nothing to compare here, especially after the appearance of 16 divisions of the S-300 air defense system and at least five Tor-M2E batteries near Minsk. We add to this a dozen battalions of "Buk" and "Wasp" and, as some experts write, "an unknown number" of C-125s that are quite suitable for use, we multiply it by very effective and modern Belarusian radars and we get an air defense system, which, possibly, will be too tough for even the much stronger members of the North Atlantic Alliance than Poland.

All this is a rather crude and primitive comparison based on purely quantitative indicators. Wars, as you know, are won not by the number of tanks or guns, but by the fighting spirit and willingness to fight to the death of those who go on the attack or hold the defense. It is precisely by this parameter, as almost everyone unambiguously admits, that the Belarusian army is one hundred heads ahead of its potential opponents from the West. Patriotism and readiness to defend the Motherland to the last drop of blood make its warriors opponents who are unlikely to be defeated.

Ctrl Enter
Noticed oshЫbku Highlight text and press. Ctrl + Enter
We are
A great interview with Sergey Lavrov: about Ukraine, Obama and IranWhat you didn't want to know about England
Military Reviewin Yandex News
Military Reviewin Google News
140 comments
Information
Dear reader, to leave comments on the publication, you must to register.