Why did they change the end date of World War II 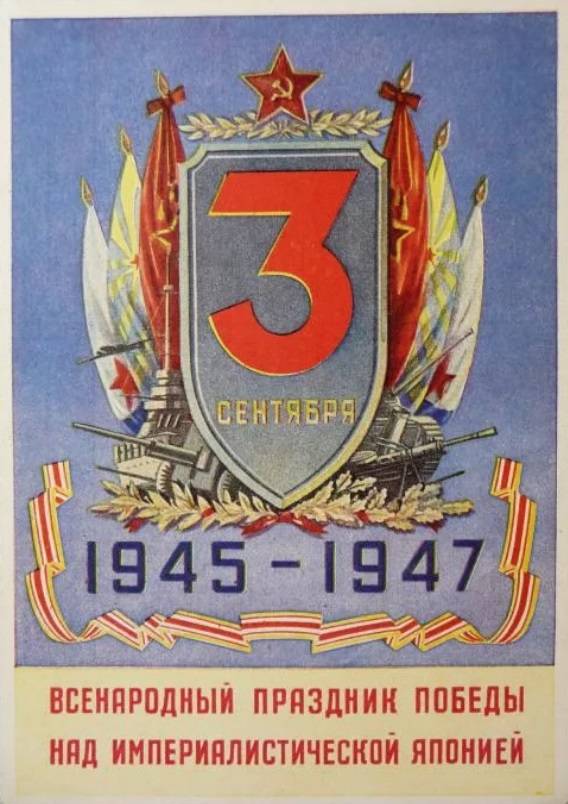 September 3 marks the Day of Military Glory of Russia - the Day of the end of the Second World War. The corresponding decree was signed by Russian President Vladimir Putin in April 2020.

In accordance with the allied commitments to the United States and Great Britain, the USSR entered the war with the Japanese Empire. On April 5, 1945, Moscow informed Tokyo of the denunciation (termination) of the neutrality pact between the USSR and Japan of April 13, 1941. The Soviet side noted that the Japanese were allies of Germany, which attacked the USSR. Also, the Japanese Empire is at war with America and England, the allies of the Russians. As a result, the Soviet-Japanese agreement lost its meaning.

On August 7, 1945, Supreme Commander-in-Chief Stalin and Chief of the General Staff Antonov signed Directive of the Supreme Command Headquarters No. 11122 to the commander-in-chief of the Soviet troops in the Far East, ordering three fronts (Transbaikal, 1st and 2nd Far Eastern) to start military operations against Japan on August 9. On August 8, the People's Commissar for Foreign Affairs Molotov summoned the Japanese ambassador, Naotake Sato, to whom, on behalf of the Soviet government, made a statement that the Soviet Union would consider itself at war with the Japanese Empire from August 9. On August 10, supporting the allies, Mongolia entered the war against Japan.

On August 9, 1945, Soviet troops launched an offensive. In the very first days, Soviet armies broke into the defenses of the Japanese Kwantung Army. Soviet aviation struck at the enemy's military installations, the most important railway stations and junctions, airfields and ports. The communications and communications of the Japanese army were largely disrupted. By August 14, Soviet troops defeated the enemy in the border zone and entered the operational space, rapidly advancing to the main vital centers of Manchuria. Japanese strong border fortifications fell, the troops suffered heavy losses, the command lost control and communication with most of the units.

In this situation, on August 14, the Japanese government issued a decision on unconditional surrender. On August 15, the imperial decree of surrender was broadcast on the radio in the Japanese Empire. Beginning on August 18, Japanese troops began to surrender. However, not all Japanese units were laid down weapon immediately. Following the orders of the military command, the troops continued to fight. In the existing unit, the Soviet command formed mobile and well-armed detachments that were supposed to operate in isolation from the main forces. Also, air and sea landings were used to capture important military facilities and large vital centers of Manchuria and Korea. On August 18-24, Russian troops occupied Changchun, Harbin, Jirin, Dalian-Dalny, Port Arthur and Pyongyang. By the end of August, blocked resistance centers, fortified areas and garrisons of the enemy had layered weapons. Separate centers of resistance were suppressed by September 10. On August 11-25, our troops defeated the Sakhalin Japanese grouping and returned South Sakhalin. In early September, Russian troops finished off the enemy grouping in the Kuril Islands.

Thus, the Red Army made a decisive contribution to the end of the Second World War. Without the USSR's action against Japan, the Japanese would have fought for a year or two, which would have led to large losses of allied troops and huge casualties among the civilian population of the Japanese islands and China. On August 29, the commander-in-chief of the Soviet Far Eastern group, Marshal Alexander Mikhailovich Vasilevsky, ordered the abolition of martial law on the Soviet territory of the Far East from September 1. On September 3, Vasilevsky reported to Stalin about the end of the Japanese campaign. According to updated data, the enemy lost over 700 thousand people, including more than 640 thousand prisoners. The losses of the Soviet troops were: irrecoverable - over 12 thousand people, sanitary - over 24 thousand people.

The Soviet government generously rewarded the participants in the war with Japan. Over 2,1 million people were awarded orders and medals, including 308 thousand - military ones. 93 soldiers and officers were awarded the title of Hero of the Soviet Union, more than 300 formations, units and ships were awarded orders, 25 received the title of guards. The honorary names of the Khingan, Amur, Ussuriysk, Harbin, Mukden, Port Arthur, Sakhalin, Kuril and others have been assigned to more than 220 formations and units. By the decree of the Presidium of the Supreme Soviet of the USSR dated September 30, 1945, the medal "For Victory over Japan" was established. More than 1,8 million people were awarded this medal. 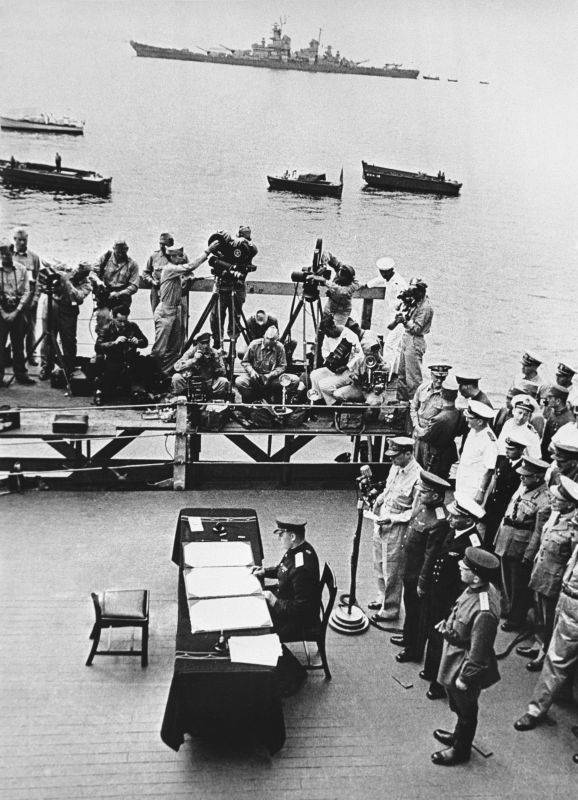 Lieutenant-General K.N. Derevianko on behalf of the USSR signs the Japan Surrender Act on board the American battleship Missouri

On September 3, 1945, the Soviet press published Stalin's appeal to the people. It spoke of the end of the war with Japan. The Soviet leader noted that our state had a "special account of Japan." We avenged the defeat in the Russo-Japanese War of 1904-1905, which "fell on our country as a black spot." For forty years the Russian people had been waiting for just revenge. And then this day has come. We returned South Sakhalin and the Kuril Islands, got free access to the ocean. We took revenge for the Japanese intervention of 1918-1922, when the Japanese attacked Russia, occupied the Far East, tormented and plundered our people for four years. In 1938 and 1939. Japan again attacked the USSR in the area of ​​Lake Hassan and Mongolia. The Japanese leadership planned to cut the Siberian railway and seize the Far East. Now the aggressor has been destroyed.

On the same day, by the Decree of the Presidium of the Supreme Soviet of the USSR of September 2, 1945, September 3 was declared a holiday of victory over Japan. For two years (1945 and 1946) this day was a holiday and a non-working day. On September 16, a victory parade over Japan was held in Harbin, it became the only one. Marshal Vasilevsky was urgently summoned to Moscow, so the parade was received by General A.P. Beloborodov, and it was conducted by Lieutenant General of Artillery K.P. Kazakov. The capital of Manchuria has never known such a celebration. Thousands of people filled the streets and squares. Soviet and Chinese flags. A sea of ​​flowers and thousands of slogans, banners in Russian, Chinese and Korean, which glorified the greatness and bravery of Soviet soldiers and their leader, Generalissimo Stalin.

At 11 o'clock, Colonel-General Beloborodov, twice Hero of the Soviet Union, arrived at the square where the units of the Harbin garrison were lined up. He received a report on the readiness of the troops for the parade and, accompanied by the commander of the parade, Lieutenant General Kazakov, began to go around the troops. Hurray thunders, then Beloborodov rises to the podium and delivers a speech. The parade begins. There is infantry, the best fighters are led by generals, Heroes of the Soviet Union Cherepanov and Batrakov. The infantrymen are followed by signalmen, sappers and mortars. The guards mortars are followed by motorized infantry, artillery and Tanks... This is how the parade of the indestructible might of the Red Army passed. 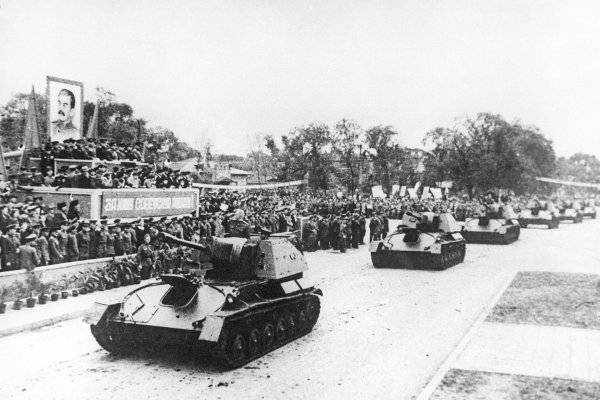 In April 2020, the State Duma decided to restore historical justice and restore the celebration of September 3. This proposal was made by one of the best commanders of the Chechen campaign - Hero of Russia, Colonel-General Vladimir Shamanov, the former commander of the Airborne Forces. In the State Duma, Shamanov has headed the Defense Committee since 2016. The State Duma adopted this bill, the Federation Council approved it. On April 24, Russian President Vladimir Putin signed the relevant law. Corresponding amendments were made to the law "On days of military glory and memorable dates in Russia." Article 1 of this law was supplemented with the paragraph "September 3 - the day of the end of World War II (1945)".

Thus, historical justice was restored in Russia. This day recalls the decisive role of the USSR-Russia in the victory over Japan. 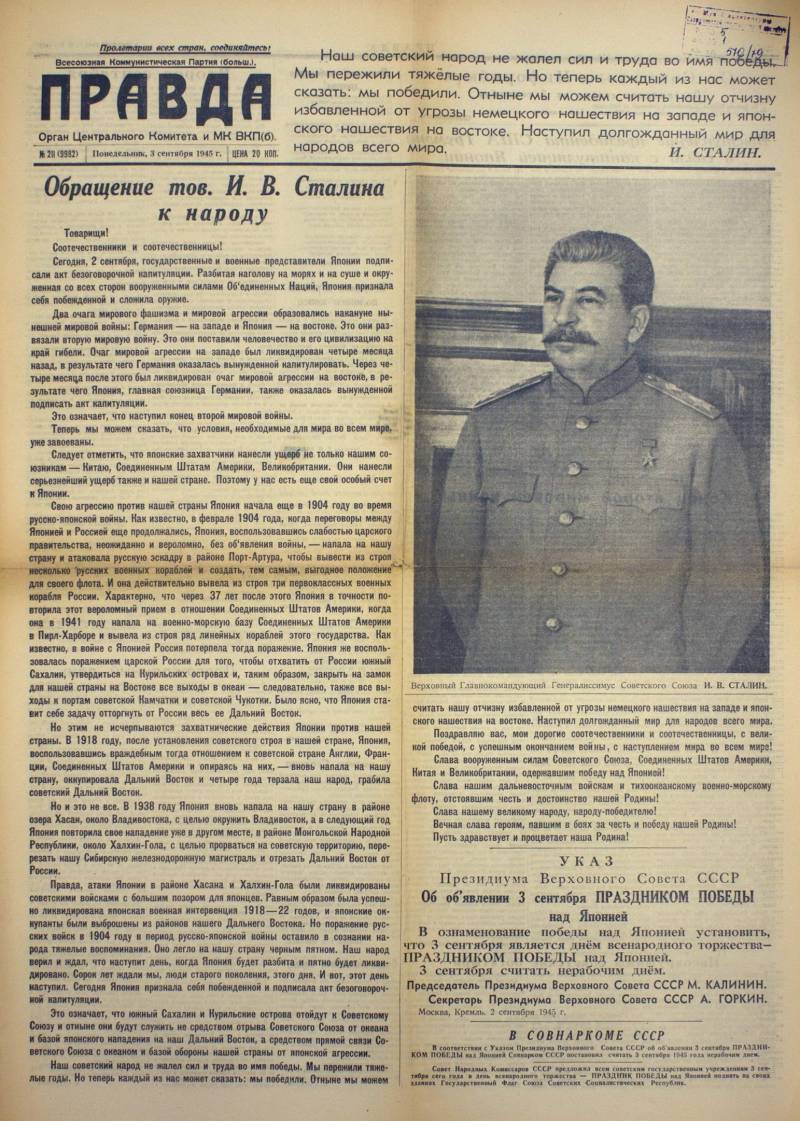 Ctrl Enter
Noticed oshЫbku Highlight text and press. Ctrl + Enter
We are
Once again about preparing Japan for war against the USSR in 1941Diplomats of the People's Commissariat of Defense: on the eve and during the war
Military Reviewin Yandex News
Military Reviewin Google News
96 comments
Information
Dear reader, to leave comments on the publication, you must to register.