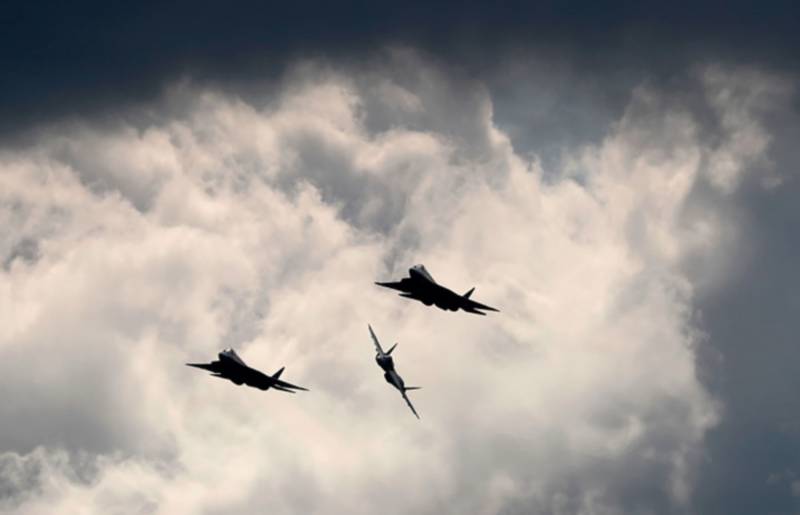 After reading in detail the material recently published in the news section of our military-analytical portal "Military Review" "The F-22 fighter will be able to detect the Su-57 only after entering the zone of destruction of its missiles", you involuntarily come to the conclusion that not all domestic and foreign military experts and journalists have the talent for detailed comparison of the critical technical parameters of on-board radio-electronic equipment, as well as missile armament of multifunctional fighters of transitional ("4 ++") and 5th generations. As a result, the final comparative reviews of the combat capabilities of tactical aviation The Russian Aerospace Forces and the US Air Force, in the tasks of gaining air superiority and long-range interception, often appear before the eyes of the audience in an extremely superficial and sometimes biased execution.


In particular, in the above material, the author completely and completely focused the attention of observers on such an electrodynamic parameter of the 5th generation Su-57 multifunctional fighter as an effective scattering surface / effective reflecting surface (EPR / EOC), the design coefficient of which for this machine is about 0,3 , 57 sq. m. Having presented this EPR coefficient as the primary criterion for the dominance of the promising Su-22 fighter in a hypothetical long-range air battle with the US Air Force F-57A multipurpose stealth fighter, the expert completely neglected the analysis of the tactical and technical parameters of guided air combat missiles as already adapted for use in systems armament control (SUV) of the Su-XNUMX and Raptor fighters, as well as those at the R&D stage with the upcoming hardware and software integration into the ammunition of these vehicles.

Indeed, having AN / APG-77 multi-mode airborne AFAR radars with a target detection range with an EPR of 3 sq. m (equivalent to the Su-35S fighter with missile and bomb "equipment" on the hardpoints) only about 270 km, F-22A fighters will be able to detect subtle Su-57 at a distance of no more than 153-160 km, confidently entering the interception radius of long-range guided missiles air-to-air class R-37M / RVV-BD (Product 610M), as well as more advanced interceptors Product 180, the upcoming integration of which into the ammunition of combatant Su-57 became known during the international military-technical forum Army-2019 ". Indeed, according to the most objective and accurate domestic military-technical information and reference publications missilery.info (IS "Rocket Technique") and militaryrussia.ru, as well as competent sources in the state machine-building design bureau "Vympel", the range of promising ultra-long-range URVB R -37M and "Product 180" will be 280-300 and 170-180 km, respectively.

Meanwhile, the range of action of air combat missiles is far from the only criterion in the system for analyzing the anti-aircraft / anti-missile potential of these products when working on remote air targets. In particular, one of the most important criteria for long-range air combat / interception is also the flight performance of interceptor missiles. And here at RVV-BD and "Products 180", unfortunately, not everything is so smooth.

Thus, being a modernized version and a constructive analogue of long-range air-to-air missiles R-33 and R-33S, the promising R-37M missile missile system (Product 610M) retained an impressive range of technological shortcomings inherent in the above-mentioned early modifications. This list includes a huge midsection (about 0,113 sq. M) combined with a mass of 510 kg, as well as a mediocre design safety factor (load limit on the power units of the airframe of the product) of the order of 20-22G. As a result, even during the operation of the solid propellant rocket (burnout of the solid propellant charge at the initial segment of the trajectory) and flight at a maximum speed of about 6300 km / h, the RVV-BD rocket will be able to intercept a target maneuvering with an overload of no more than 7-8G, while the digital EDSU stealth fighters F-22A, integrated into the onboard computer command units based on i960 processors, boasts a specialized combat mode that allows the pilot to carry out anti-aircraft maneuvers with overloads of 9,5 units.

As for the flight technical / energy parameters of the R-37M / RVV-BD ultra-long-range missiles at the terminal sections of the trajectories (at a distance of more than 250 km from the vanishing points from the carrier suspension nodes), where the solid-propellant charges of the dual-mode solid propellants will be exhausted, and the missiles will enter dense layers of the stratosphere and troposphere on the descending branches of the trajectories, they are unlikely to provide a confident interception not only of the Raptors maneuvering with 9-fold overloads, but also of the F-5B STOVL SCVP maneuvering with 7-35-fold overloads. An impressive midsection, which increases the aerodynamic drag of the R-37M in dense layers of the stratosphere and troposphere, as well as a "dry" mass (with consumed fuel) of about 300 kg will contribute to a galloping decrease in the flight speed of an interceptor missile from 5-4M to 1500 and even 1300 km / h, when the planes of standard aerodynamic rudders completely lose their effectiveness.

Consequently, even in the case of an early launch of RVV-BD missiles at the Raptor, either in HOJ mode (interference guidance; if the American pilot is using the integrated electronic warfare system), or according to the data of the pilot run, which has tracked the broadband LPI radiation of the airborne AFAR -radar AN / APG-77, or by target designation from the AWACS A-100 aircraft or ground multifunctional radar complex "Sky-M", the probability of interception will remain extremely low due to the low flight performance of the R-37M at the terminal section of the trajectory.

Being the descendants of the highly maneuverable medium / long-range air combat missiles RVV-AE / SD (R-77 / -1), the more advanced "Products 180" will be able to boast a 1,5 times higher design safety factor, providing available overloads of the order of 30G, which will allow you to intercept targets maneuvering with overloads of 12-15 units. at a distance of up to 130-140 km. At this distance, the small midsection of the "Product 180" hull, which helps to reduce its ballistic braking, will allow maintaining an acceptable flight speed (1,7-2M) for intensive "energetic" interception of the F-22A.

The departure of Vympel specialists from the concept of using folding lattice aerodynamic rudders, which has proved to be excellent in the RVV-AE (R-77) project, providing the rocket with an angular turn rate of about 150 degrees / s with an available overload of about 35-40G, as well as the absence of any or advances in the refinement of the KRPD-TT "371" integral rocket-ramjet engine, which allows a promising air combat missile to maintain high flight speed and maneuverability at the terminal trajectory, will definitely not allow the "Product 180" to noticeably surpass the American long-range AIM- 120D, as well as the even more advanced European air combat missile "Meteor" from the defense missile concern MBDA. With regard to the latter, work is being carried out on constructive and hardware-software integration into the SUV and in-body armament compartments of the F-35B fighters of the Royal Air Force of Great Britain.

It is logical to assume that in long-range air battles between the promising Russian Su-57 fighters and the American and NATO stealth fighters F-22A and F-35A / B / C, parity will be established, which continues until the promising long-range guided air combat missile RVV becomes operational. -AE-PD ("Product 180-PD"), the development program of which was frozen in 2013.

Ctrl Enter
Noticed oshЫbku Highlight text and press. Ctrl + Enter
We are
The tragedy of the American army ("The Atlantic", USA)Situational analysis of the death of the MH17 flight (Malaysian Boeing 777), made on the basis of engineering analysis from 15.08.2014
Military Reviewin Yandex News
Military Reviewin Google News
110 comments
Information
Dear reader, to leave comments on the publication, you must to register.