The military fate of the Radziwill (Konigsberg) Chronicle 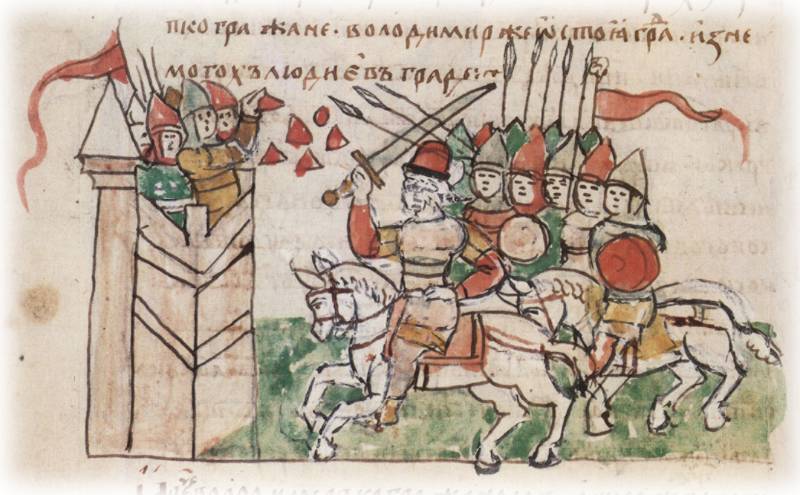 Rereading the work of academician BA Rybakov "Kievan Rus and Russian principalities of the XII-XIII centuries." (M., 1993), I drew attention to the information that the author gave about the "Radziwill", or "Konigsberg", chronicle: "The precious feature of the Radziwill chronicle is the presence of 618 colorful miniatures, aptly called" windows to the disappeared world "". And most importantly: “The original of the vault has not reached us, but its copy, made in the 562th century, has survived. in Smolensk and was first introduced into scientific circulation by Peter the Great "(p. XNUMX).

This is what the Radziwill Chronicle is. First, as Academician Rybakov writes, “the collection presents“ the deeds of the ancient princes ”from Kyi to Vsevolod the Big Nest.” Secondly, this chronicle collection was created in the Vladimir-Suzdal principality at the beginning of the 1292th century, that is, even in the pre-Mongol era, "possibly with the participation of Vsevolod's eldest son, Constantine the Wise." Thirdly, this is the oldest surviving chronicle: the text ends with the first years of the 1305th century. (the narrative in the Ipatiev Chronicle was brought to XNUMX, in the Laurentian Chronicle - to XNUMX). Fourthly, this is the first "front", that is, an illustrated chronicle that has come down to us. (Cm.: S. I. Podobedova Thumbnails historical manuscripts: On the history of Russian facial annals. M., 1964, p. 49-101; M.D. Priselkov History of Russian chronicle writing XI-XV centuries. L., 1940, p. 57–63, 82–87). 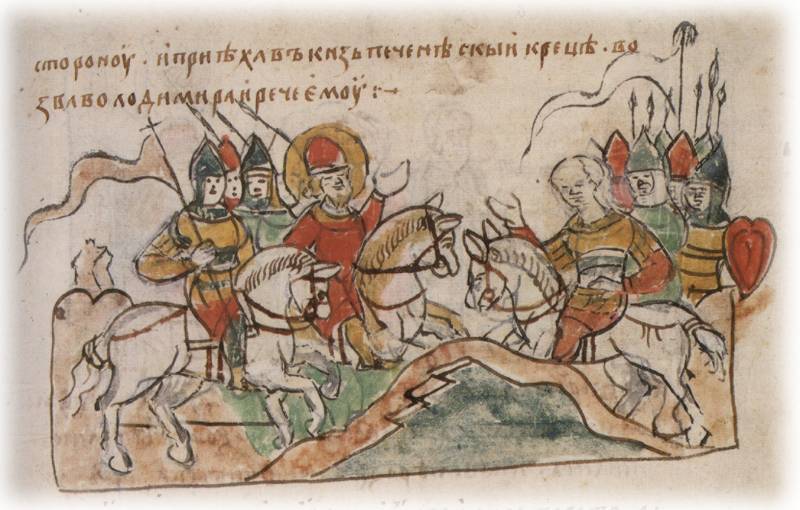 Meeting of the troops of Vladimir Svyatoslavich with the Pechenegs on the Trubezh River near the ford, where the city of Pereyaslavl was later built
Historians A.-L. Schletser, X. A. Chebotarev, N. E. Cherepanov and others understood the significance of this chronicle as soon as it fell into their hands, therefore, back in the 1989th century. attempts were made to publish it. However, the first scientific edition of this collection was carried out only in 1994 in Leningrad under the responsible editing of Academician Rybakov (see also: Radziwil Chronicle: Text. Research. Description of miniatures / Editor-in-chief M. V. Kukushkina. St. Petersburg - M. , XNUMX).

Single combat between Mstislav Vladimirovich and Redey Kasozhsky, murder by Mstislav Rededy with a knife
The Radziwill Chronicle was used for clarifications and additions when publishing the Laurentian Chronicle (see: Berezhkov N.G. Chronology of Russian annals. M., 1963, p. 69-71; A. V. Chernetsov To the study of the Radziwill Chronicle. - In the book: Proceedings of the Department of Old Russian Literature. T. 36.L., 1981, p. 286). 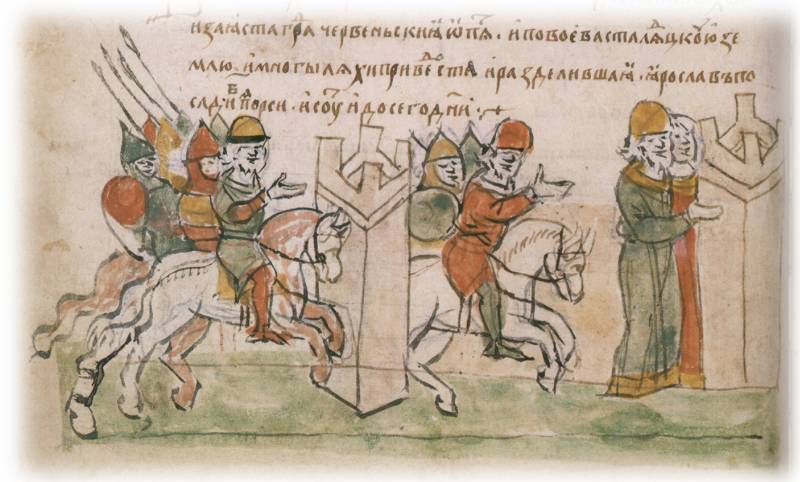 Joint campaign of Yaroslav Vladimirovich Kievsky and Mstislav Vladimirovich Chernigovsky and Tmutarakansky to Poland
The Library of the Academy of Sciences contains a copy of the Radziwill Chronicle, commissioned by Peter I. Under what circumstances was this order made? I wanted to find out. It was possible to establish that in March 1713 Tsar Peter was returning to St. Petersburg from Berlin, one of the points of his European trip for the Northern War. Passing through Konigsberg, where the chronicle got through the Radziwill family in the XNUMXth century, Peter learned about the existence of this chronicle and ordered a copy of it with miniatures. The historical studies of V. N. Tatishchev and M. V. Lomonosov began with the study of this copy. (Cm.: Lurie Ya.S. About the origin of the Radziwill chronicle. - In the book: Auxiliary historical disciplines. T. 18.L., 1987, p. 64-83). 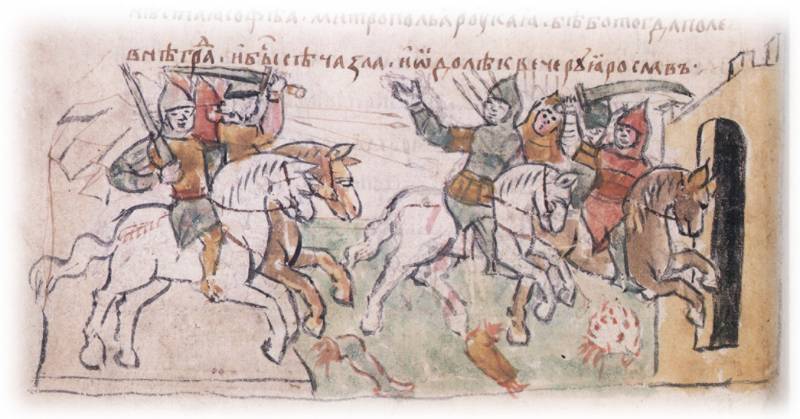 The victory of Yaroslav Vladimirovich Kievsky over the Pechenegs and the flight of the Pechenegs from near Kiev
In the end, the original of the chronicle itself ended up in Russia: it was delivered to St. Petersburg after Russian troops entered Konigsberg in 1758 during the Seven Years War. Perhaps they were looking for him there purposefully. It is known that already in 1761 the chronicle was listed in the St. Petersburg Academic Library. After that, also in the XNUMXth century, new copies were made from the original, but the academic edition at the end of the XNUMXth century. was carried out after all from the original. 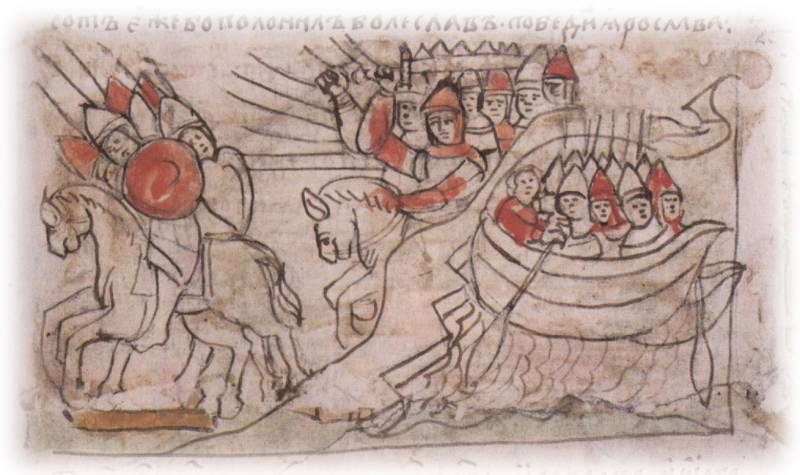 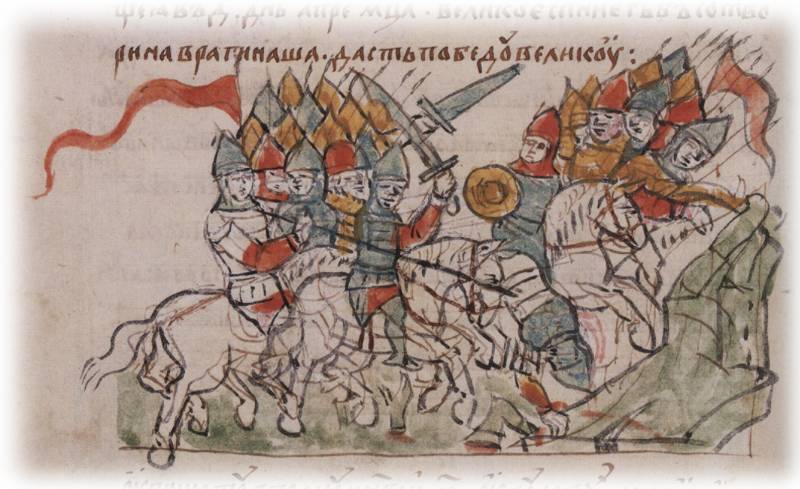 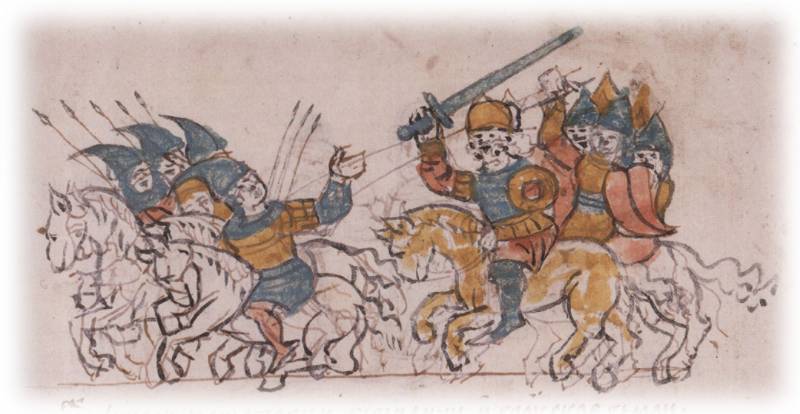 The campaign of Yuri Vladimirovich Dolgoruky, Prince of Rostov, to the Volga Bulgaria and his victory

Author:
Pavel Gusterin
Articles from this series:
On the unity of the Russian world on the example of the grandchildren of Mstislav Udatny
Was Alexander Nevsky named after Alexander the Great?

Ctrl Enter
Noticed oshЫbku Highlight text and press. Ctrl + Enter
We are
Tsar BatuDo not chop off the roots of Russian culture
55 comments
Information
Dear reader, to leave comments on the publication, you must to register.